The topicality of torture

Torture has been a universal feature of life across time, place and person. Mrityu Ghar, the new co-produce play by Rangakarmee, Mukul and Calcutta Tigers together sets an outstanding example of this truth.

But what is truth?

Asha, whose name means hope, is slowly and steadily having her life snuffed out inside the torture cell in a prison because she refuses to divulge the names of the rebellious, underground leaders of group of which she is an active member. Her condition is worsened by the fact that she is pregnant and exposed and victimised by her unceasing and pervasive torture by Zafar, the police chief who appears to have acquired specialised skills in torturing the inmates irrespective of their age, gender and health condition, who visually takes great delight in inventing and innovation different kinds of torture.

Mrityu Ghar is the Indian adaptation of Dea Loher’s German play Olga’s Room. It was penned in 1992 and was inspired by the real-life story of Olga Benario, the German Jewish communist who was active in Germany and Brazil in the 1930s demonstrating how determinedly and stubbornly a woman, in any condition, can pit herself against a man like Zafar who actually enjoys torturing his prisoners. Whether the torture is to seek confessions, names and political decisions taken by the party Asha belongs to or whether he inflicts torture for its own sake reveals itself layer by slow layer as the play rolls out to its predictable closure.

Dea Loher was born in 1964 in Traunstein, Germany. She initially used the first name Dea as a pen name, but eventually changed her name officially to Dea. She studied German literature and philosophy at the Ludwig Maximilian University of Munich. Her first plays premiered in the early 1990s, and she gained recognition as one of the most important young playwrights of her time in Germany. Dea Loher has since been awarded major prizes for drama and literature in Germany, including the Joseph-Breitbach-Preis. 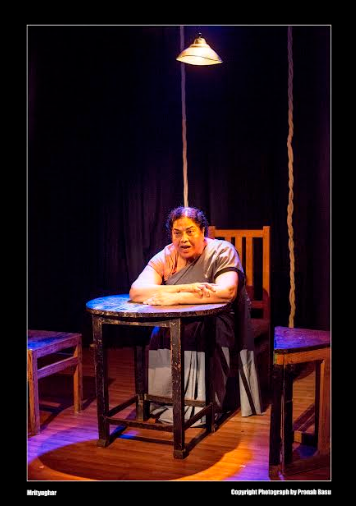 Mrityu Ghar shifts base and time to the political affiliation of the three imprisoned women, Asha, Kalpana and Beena who were actively affiliated to the peasant uprising in undivided India and later in Pakistan sometime in the 1940s possibly. But as the play unfolds, unfolding layer upon layer of torture inflicted in versatile ways on the three women, one realises that the world has not been able to extricate itself or its people from the relationship between the misuse and abuse of power by those who are officially empowered to wield it and those on whom violence – the most graphic abuse of power – is inflicted.

Mrityu Ghar, as the name suggests, is dark and depressing where the audience is guided through a dark tunnel that is endless and does have a ray of light at its end as there is just no end. Mukul Ahmed directed and produced the play jointly with Rangakarmee under his production house Mukul and Ghetto Tigers, a theatre company based in London and founded in 2011.

There is absolutely no relief either for the audience, or for the actors or for the ambience and the entire play. Usha Ganguly as Asha carries the play on her able shoulders, crying out just so at the right time, trying to throttle Zafar with the very rope he uses to torture her, perhaps to prove that he as as vulnerable as she is, and are Kalpana and Bina, who also belt out their angst and grief through songs, to torture the difference lying in who holds the rope and has the power to use it any which way.

The characters, mainly Asha, journey through their lives, their inner emotional turmoil and their torture with the resilience they have built within themselves not to surrender, In fact, the very philosophy underlying the play is Asha’s inner strength that empowers her with the power and the resilience to turn the tables on her torturer. This ideology somehow reminds us of Mahasweta Devi’s Dopdi who shocked her rapists by challenging them!

The props – a centre table, three chairs who play their own role- changing their positions as and when the situation demands, ropes hanging from the back curtains pulled at, for torture challenge and the darkness of the ambience to flesh out the interiors of a torture cell. The play also underscores the feeling of solidarity between and among the three prisoners though their sometimes have their minor squabbles resulting from the constant stress they are reeling under. 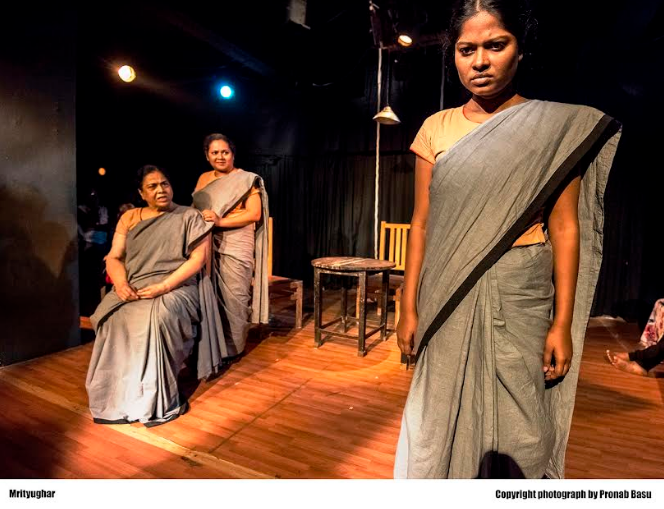 The music and sound design are deliberately left low-key focussing on the dialogue and the action within the performing space, complimenting rather than dominating the story and the action. One positive point that strikes about this production is that the director and the two other actresses and the actor playing Zafar, namely, Lopamudra Guha Niyogi, Swagata Chakraborty and Biswajit Das are working in the play as freelancers which is not only commendable but also very inventive and creative as these freelancers, like the director, bring in their own schools to invest in their respective performances.

The performances are deliberately stylised to place emphasis on the threatening environment that sustains on the proscenium and the performance also shows that Mrityu Ghar does not mandatorily demand the stage and can be performed at unconventional open spaces too.

Rightly timed to be performed for just an hour, Mrityu Ghar puts the full-stop just at the right time while the performance of Olga’s Room unlike the two-hour performance in Arcola, London, in English in 2013, which had been a heavy emotional strain on the audience though the performances enriched the form and the context.