Netaji Subhash Chandra Bose and the Politics of Invisibility

On the relative invisibility of Netaji in the audiovisual history and culture of India.

Srijit Mukherjee, the popular Bengali filmmaker, officially announced his film on Netaji Subhas Chandra Bose that he plans to release in January 2020 to coincide with Netaji’s birth anniversary. A beautifully designed poster was released by producers SVF (Shri Venkatesh Films) which shows a bald, with white streaming hair, a bearded old man sitting with his back to the camera facing the wall plastered with different news items about Netaji’s death / disappearance / escape and so on. He has a pipe sticking out of his mouth, wearing round-framed glasses. A lantern is beside him atop a suitcase which, as a journalist reads, could be a metaphor for the suitcase carrying documents that perhaps Netaji knew the secret about.

The title of the Bengali film is Gumnaami – The Greatest Story Never Told. The poster claims that the film is a celluloid adaptation of a book jointly authored by Anuj Dhar and Chandrachur Ghosh entitled India’s Biggest Cover-Up. According to history, Netaji went missing after he boarded the Taiwan flight and was reported dead in a plane crash on 19th August 1945. Some years later, an elderly man reportedly bearing a striking resemblance to Bose rose as if from the bottom of the earth. He came to be known as Gumnaami Baba. The masses and some political leaders felt that perhaps this man was Netaji who was believed to have died in the crash. But Gumnaami Baba never ever claimed that he was Netaji himself. The old, balding and bearded man is perhaps an imagined imageof Gumnaami Baba but Mukherjee is not telling anything right now. The book, published by Vitasta Publishing in 2013 is mainly credited to Anuj Dhar who has thoroughly researched every minute detail about how Netaji died and how his contribution to India’s independence has been effectively marginalised and slighted by the leaders of Independent India. It offers an investigative insight into the Netaji mystery and its stranger-than-fiction subplots. Relying heavily on official records—bulk of them still security classified in violation of democratic norms—the book uncovers a systematic obstruction of justice by the Government of India. The narrative is backed by excerpts and images of still secret records. Archival material and information obtained under the freedom of information acts of India, the US and the UK have also been used.

Says Sujit Sanyal in his review of the book, “Bose and his mysterious death continued to haunt us middle-class Bengalies till perhaps we got tired of the speculations of he being sighted and numerous conspiracy theories that went with it. Anuj Dhar s book stays clear from such speculations. He has tried to put the puzzles together with whatever authenticated source he could lay his hands on and on interviews he had with people who had some views in the matter. His access to sources in terms of Classified Files and other data with the Government was limited. He had a hard time procuring them till his RTI move helped him to whatever extent possible. He has also gone through the published documents on the three Netaji Commissions that had been set up to probe the truth with fine tooth comb.”

Rajesh Balwant Phadke, another devotee of Netaji Subhash Chandra Bose, after reading the book, says, While dwelling into Netaji Subhas Chandra Bose book accidentally highlights beginnings of corrupt Indian ecosystem such as, (a) changing loyalties for political gains, (b) using bureaucrats or retired personnel against monetary and other benefits / favours, (c) paid media, (d) using secrecy as a tool, (e) misuse of international relations or lack of it. Even for those who may not be very interested in Bose or in his intriguing life, the book throws light on the roots of India’s progress in developing a corrupt ecosystem that is nearly impossible to break today. 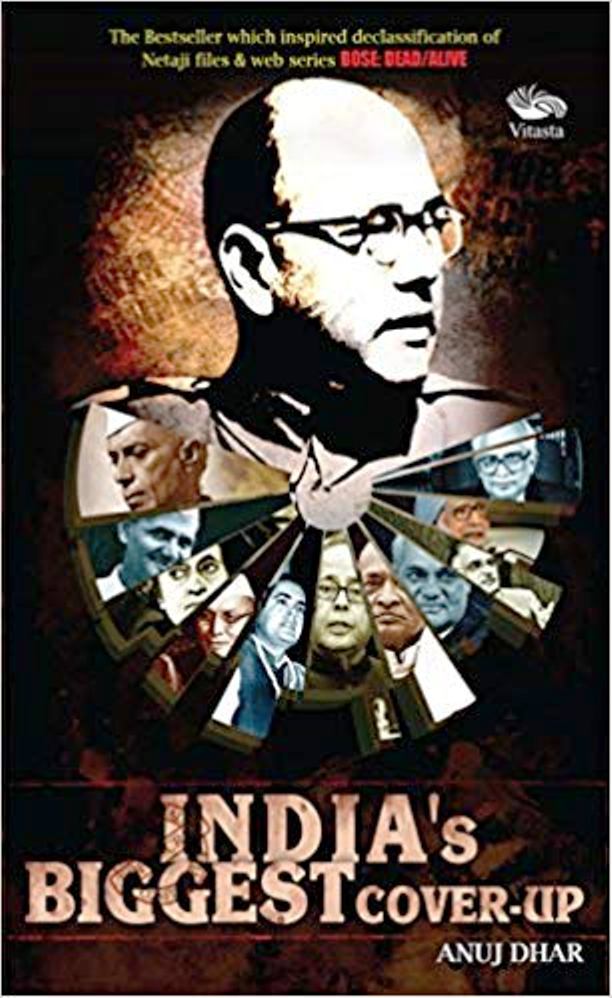 For a feature film, it is important to remember that the narrative fiction of the story may not precisely coincide with the recorded biography of the subject the film is being made on but is also about how the filmmaker perceives the subject, Nehru or Gandhi or Bose, and how the filmmaker desires his/her audience to see the subject. This gap between historical truth and personal perception and interpretation of the filmmaker about this truth is easily understood if one considers different narrations of history by different scholars, each one giving an account of a national figure that is different from the others. The validity of the subject of the celluloid discourse (cinema) and the authenticity of the film need not necessarily spring from actuality but rather, from the essence of the filmmaker’s memories, desires and dreams about the subject he is making the film on.

Sadly however, films made on Netaji Subhas Chandra Bose rarely raise discussions about these gaps because very few films – features or documentaries, have been made on this great leader with the depth and seriousness, logically leading to a lack of adequate body of films that could be used for extensive academic research. That brings into focus the relative invisibility of Netaji in the audiovisual history and culture of India.

The number of films made on Netaji, in feature film or documentary format, is not something we can be proud about considering that India produces the largest number of films in the world and that Netaji is a national hero. This is perhaps one of the reasons why filmmaker Shyam Benegal decided to call his film on the great national leader The Forgotten Hero (2005.) This writer could find hardly ten notable films on Netaji while researching this paper but only one of these is available with Internet suppliers of DVDs of old films.

There was a big fire in FTII, Pune. All the cans of Pahela Aadmi were destroyed. So, there is no way in which anyone can see this film either in the archive in Pune, or in DVD versions. There is absolutely no information about this film even on the NET. A list of the 619 nitrate films consumed in the fire at the National Film Archives vault at FTII, Pune reveals the extent of the valuable audio-visual history that is forever lost. Film theorist and historian, Amrit Gangar analysed and assessed the loss.

Hemen Gupta, who made two very good films on the freedom struggle 42 and Bhuli Nai in Bengali, made his last film Netaji Subhash Chandra Bose in 1966. Gupta himself was in the INA and it was a feeling of nostalgia born of first-hand experience that motivated him to make the film.

The Forgotten Army (1999), directed by Kabir Khan and produced by Akhil Bakshi, retraces the historic march by going back to the place with veterans of the INA, Col Gurbaksh Singh Dhillon and Capt Sehgal to visit the old battlefields and search out their old comrades in Burma. It was making a film by getting to the very soul of the times. The film brings back some poignant scenes like Col Dhillon bowing before the cave which gave shelter to the soldiers at Mt. Popa as the British planes bombarded the area.

Netaji Subhas Chandra Bose – The Forgotten Hero (2005) is an understatement that lingers starkly loud in the memory space. The film begins with the Tripura Congress meeting in 1939, with Bose resigning as Congress president because he doesn't believe the British will listen to the language of non-violence. The final five years of Subhas Chandra Bose's life marked not only an important phase in his own personal and political existence, but also the turning point in India's struggle for independence from British rule. Right from his daring escape from India to Afghanistan in 1940, to his historic meeting with Adolf Hitler in Germany, alliances with the Russians, Italians and Japanese, and finally the formation of the Indian National Army, there is enough drama to keep you absorbed. The brilliance of Benegal matches the effortless éclat of some of the best names in the Indian film industry.

It is a decent and honest attempt at depicting a forgotten phase in Indian history without the slightest touch of controversy or contempt, amidst the mist of Quit India and Gandhi, a phase no less substantial. It invokes respect for the great work and ideals Netaji stood for, and continues to inspire many generations alive and those yet to come.

Invisibility may be voluntary or coerced by history and politics. In case of Netaji, it is not voluntary because Netaji has done too much to will away his contribution. His untimely and sudden disappearance did not permit him the space to make himself invisible. History and its characters are too powerful to succumb to voluntary invisibility. One reason that will explain away the invisibility is his sudden disappearance. But, this very disappearance could have made it politically convenient to ‘forget’ him and erase him from visible space that cinema offers. Is this 'invisibility' a political strategy of erasure of the great figure of India’s national struggle for freedom? Or is it because of the selective amnesia Indians suffer from when it comes to a study of history and historical figures through the audiovisual medium of cinema and television?

Note: This has some extracts from a paper presented by this writer at a Conference on Nationalism, Media and Subhas Chandra Bose: Issues and Challenges presented at the Institute of Historical Studies, Kolkata, on Saturday, 14th February, 2009