Hampi has been in the news recently on two accounts. The first was uplifting and the second was, well, disturbing. First Hampi, a 16th-century architectural wonder, made it to second spot in a New York Times list of 52 places to visit in 2019. Then, a video went viral of a few youths vandalising Hampi, forcing locals to protest on the street demanding better protection for this heritage site of immense value.

Both news items make one thing clear. If you haven’t already been there, it is time you put on your travelling shoes and head to Hampi.

A UNESCO World Heritage site since 1986, located in northern Karnataka, Hampi has long been a backpacker’s and history buff’s paradise. Of late, for better or worse it has seen the arrival of a big party scene as well for the youngsters.

Most visitors to Hampi reach Bangalore or Hyderabad by air and then take an overnight train to Hospet, which is just 12 kilometres from Hampi. Recently two daily flights have started operations from Hyderabad and Bangalore to Bellari, which is about two hours by road from Hampi.

Hampi was the spot chosen by the founders of the Vijayanagar empire for their capital. Soon it became a prosperous medieval city of some five lakh inhabitants with a flourishing silk, cotton and spices trade.

The Hampi of today is but the skeletal remains of that city. Set in an unearthly landscape, it carries great charm but has a forlorn feel about it too.

It is not dead, in fact it’s alive and thriving, but in parts.

Hampi is a place where you are likely to see arguably the most beautiful sunrise in the world. It presents a varied and stunning vista which is any photographer’s delight.

You will encounter views in Hampi of the Tungabhadra river coursing through a lush scape set with craggy hills, boulders precariously balanced, plantain plantations, palm groves, paddy fields - all dotted with over 3,500 monuments spread over an area of 36 square kilometres, dating from the 14th to the 16th centuries.

If you have a sense of history, you will need well over a week to appreciate Hampi. If not, you can get a feel for the place over a couple of days, which many youngsters prefer to do, and sadly miss the whole point.

The centre of Hampi’s cultural and religious life is the impressive Virupaksha Temple. This is a fully active temple considered to have been founded in the 7th century CE, with the major surviving construction made during the 15th-century Vijayanagar Empire. It is the central attraction for the religious minded locals and visitors. And also a must-visit for those who are interested in the architectural or cultural side of things.

The temple has a resident elephant called Lakshmi. Early morning one can catch the interesting sight of Lakshmi being given a bath in the middle of the Tungabhadra river, just next to the temple. Lakshmi spends the day time blessing the visitors in a very popular ritual which brings out smiles all around.

Located just next to the Virupaksha temple is the Hampi Bazaar, the nerve centre of the tourist activities. After the local administration carried out a controversial demolition job in 2012, Hampi Bazar is now in a truncated form. But still, this is the place where you will find several budget homestays, eateries and souvenir shops.

“They eat mutton, pork, venison, partridges, hares, doves, quail, and all kinds of birds; even sparrows, and rats, and cats, and lizards, all of which are sold in the market of the city of Bisnaga,” wrote Fernão Nuniz in 1535. “Everything has to be sold alive, and there are fish from the rivers in large quantities. The markets are always overflowing with abundance of fruits, grapes, oranges, limes, pomegranates, jack-fruit, and mangoes, and all very cheap.”

Across the Tungabhadra near the Virupaksha Temple, is a locality called Virupagaddi. This is where a number of guest houses and cafes have come up on a stretch of land between the river and a paddy field. New ones sprout before each tourist season. Every evening, especially on weekends, this area transforms into a pulsating party scene, which is drawing millennials from cosmopolitan centres such as Delhi, Bangalore and Hyderabad.

Sadly, most of these people do not have a clue about the heritage value of Hampi and nor it seems the desire to find it. They come for a bit of weekend fun and leave Hampi with the impression that it’s nothing more than ruins in a wasteland.

The Vittala Temple is perhaps the single most impressive monument in Hampi. This 15th-century temple is an architectural marvel. Though it is no longer an active temple and no puja is performed here (it is said that it was never completed or consecrated) the beauty of the structure, its various elements and details are most impressive.

The most famous element is the centrally placed stone chariot, which is a popular selfie spot.

The main temple has a set of musical pillars, which emit a pattern of musical notes when struck. It is a good idea to hire a guide here to fully understand and appreciate the monument.

For those looking for a quieter Hampi experience the place to stay is Anegundi. It is a small village within a fortified wall, across the Tungabhadra, some 5 kilometres away from the more commercial Hampi Bazaar.

The place is also known as Kishkinda, the fabled monkey kingdom, with a hilltop Hanuman temple. There are some good heritage homestays here and nothing of Virupapur Gaddi’s boisterous party scene.

- Visit the Vittala temple, the most spectacular monument in Hampi and get a selfie with the famous stone chariot

- Get blessed by Lakshmi, the resident elephant of the Virupaksha Temple

- Ford the Tungabadhra in a coracle or karakkal, a traditionally made boat of reeds

- Indulge in the sport of bouldering, challenging yourself on the boulder-strewn landscape

- Hire a cycle and ride across the 36 square kilometre spread of Hampi, discovering the lost and unnamed temples and monuments that dot its landscape

- Have a meal at one of these iconic eating places: the Mango Tree (Hampi Bazaar) or the Laughing Buddha (Virupapur Gaddi). 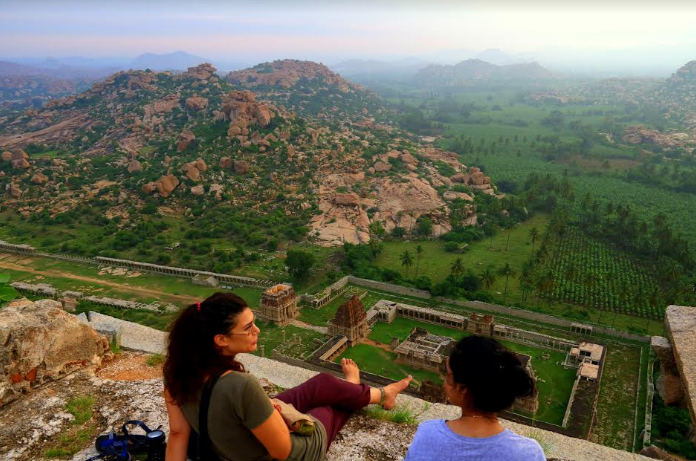 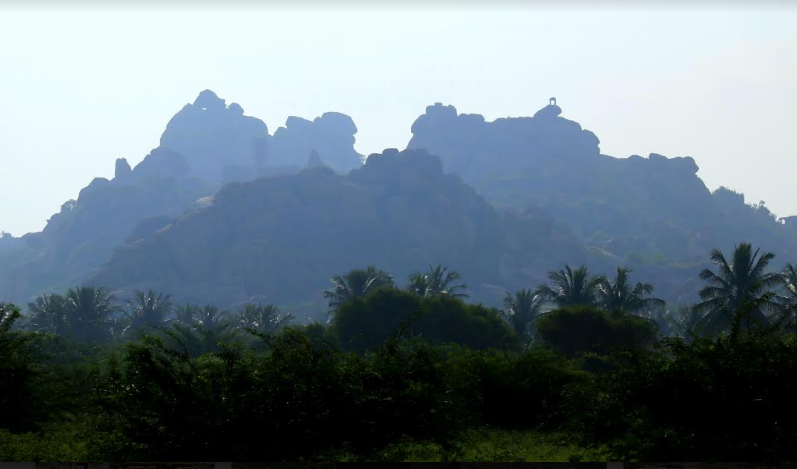 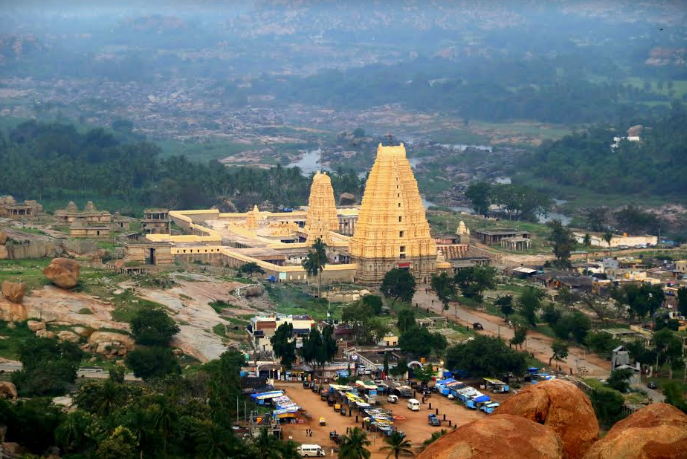 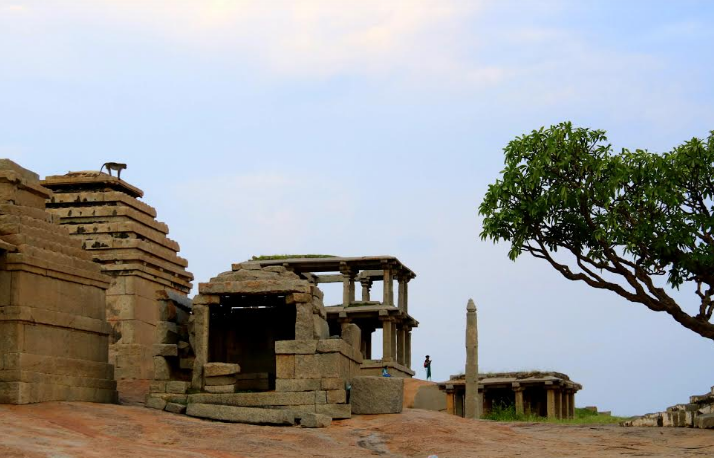 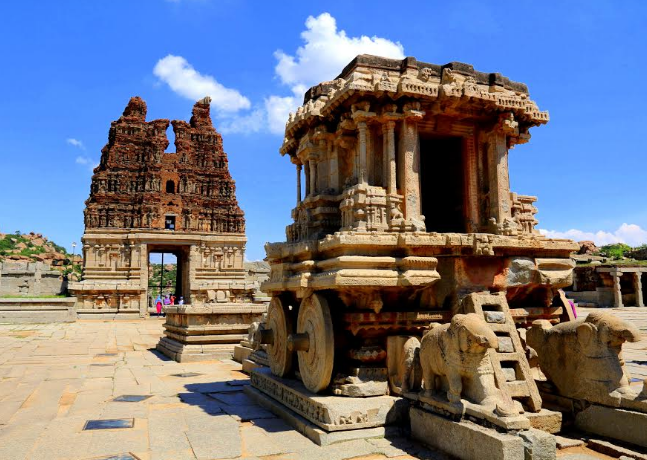 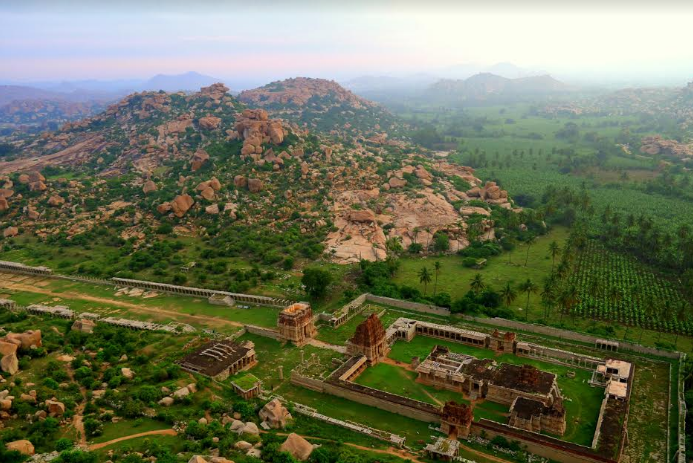 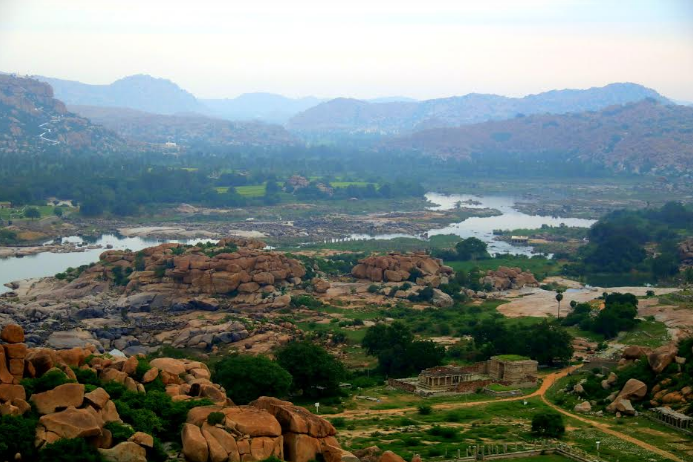 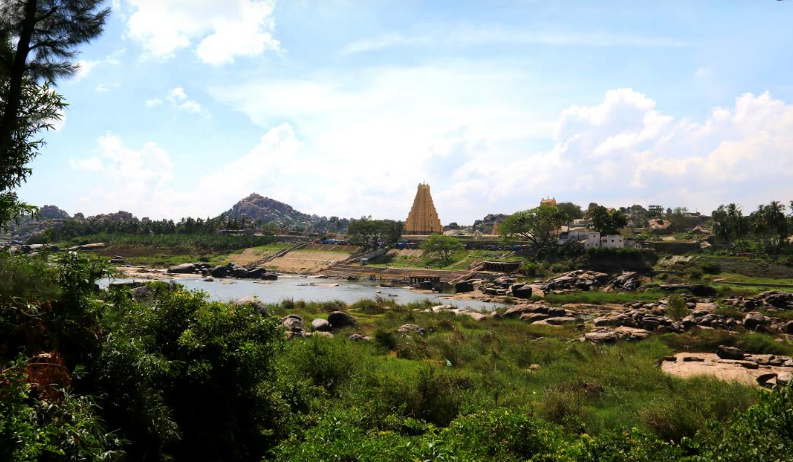 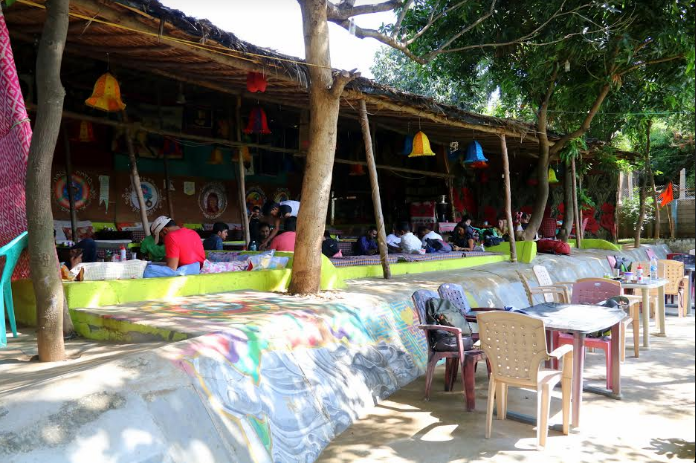 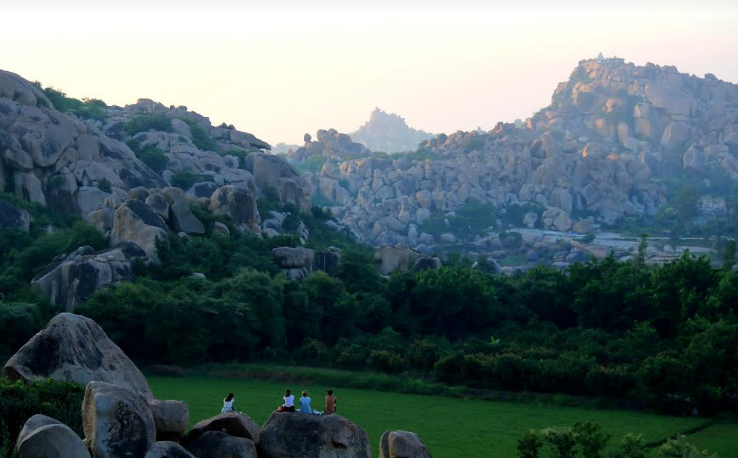 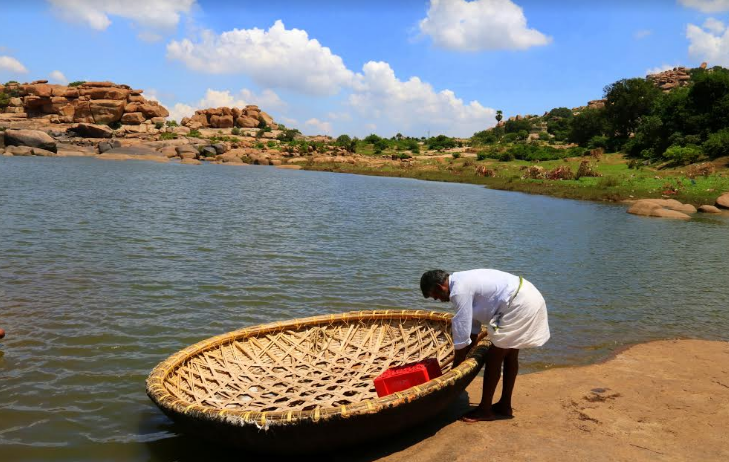 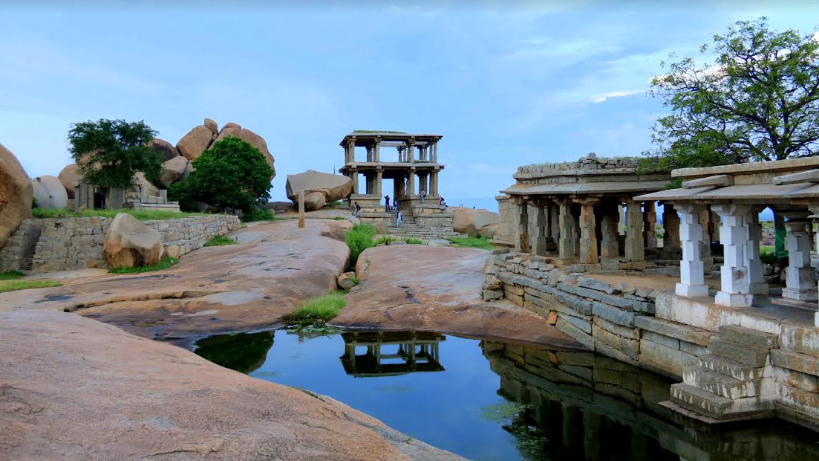 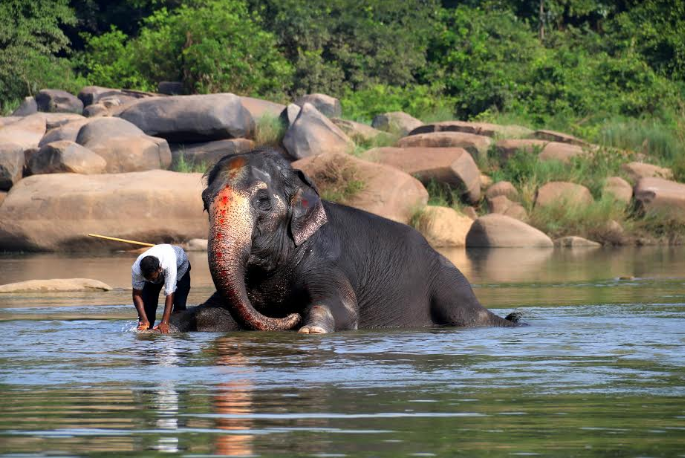