All is not well with the world of the Indian Muslim.

According to Professor Nadeem Hasnain, Indian Muslims are being pushed into an intellectual and socio-cultural ghetto.

In his new book Muslims at Crossroads, the Lucknow-based social scientist notes a growing tension between a native, deeply Indianised Islam and a strident Arab import that attempts to transform South Asian Islam from an inclusive and adaptive practice to a more exclusionary one.

South Asian Islam is not Saudi Arabian Islam. The practice of Islam in South Asia involves a strong local connect and most of these practices do not violate any fundamental principles of Islam.

Feelings of marginalisation and victimhood amongst Indian Muslims have increased from 1980s onwards. The demolition of the Babri Masjid in 1992 and the state supported violence against Muslims in Gujarat in 2002 are a case in point.

The result is the radicalisation of some Muslims who make headline news, giving the impression that all Muslims are radical.

Today Islam is stereotyped and stamped with a negative image because not enough is known about ordinary, peace loving Muslims. There is a lack of field studies on the everyday life led by majority Muslims. In various social science disciplines the depiction of Islam and Muslims is mainly based on textual interpretations.

Some field work has been done on the way most Muslims live, however a vast part of the Muslim world remains unexplored by social scientists.

“This is because the Anthropology of Islam is a relatively neglected area especially in the study of how Muslims make sense of Islam in every day life,” says Hasnain, regretting that radical Islam has grabbed dominant space in all debates about South Asian Muslims.

It helps to know that Islam was first introduced by traders before anyone else. Then came the warriors, and mystics. While the first two had minimal influence in the spread of Islam, the mystics attracted most people in South Asia. The dominant message of the mystic was love, and oneness of humanity. The mystic practiced tolerance and understanding towards Hindus and Hinduism. The mystic adopted many Hindu customs and ceremonies and sufi orders like the Chishtiya were most popular amongst the masses.

Some of the mystics dressed like peasants, took to vegetariansim and spoke the local language. This provided a local context to Islam in the Indian sub continent and led to a number of syncretic traditions of a joint composite culture that served as glue between Hindus and Muslims leading to peace, much prosperity and a sense of shared belonging in society.

Before the recent interest of sociologists and anthropologists, theologians had dominated the study of Islam. The emphasis was on some pan Islamic unity and commonality of beliefs across the Islamic world.

Now anthropologists contest this false sense of homogenity and point to the divesity in the day to day practice of Islam amongst Muslims. That is what makes Islam in South Asia unique and worth studying and preserving.

Hasnain believes that further studies of the Anthropology of Islam will humanise ordinary Muslims and their way of life. The studies will help counter negative perceptions like Islam means violence and war, and that it was forced upon the people of South Asia.

Hasnain is most interested in living Islam. For the story of lived Islam is the peaceful story of majority Muslims who believe in constant accommodation and adaption to local practices.

As a senior fellow from the Indian Council of Social Science Research (ICSSR), Hasnain led a field research on living Islam in the UP region and the way it is being challenged every day by radical Hindus and Muslims alike.

Hasnain’s research revolves around the Awadh region of North India to find out what ordinary Muslims are like. For the study, Hasnain chose a method called salvage used by social scientists to record cultures threatened with extinction due to acculturation and modernisation.

He concludes that in order to purge the Muslim community of ‘impurities’, Islamic purists attempting to Arabise Islam in South Asia are ruining the shared cultural space that has served as a bridge betweeen Muslim and non Muslim populations for centuries.

Once data was collected and analysed, Hasnain published a book based on the same study. This is an important book especially since Islam in South Asia remains neglected by scholars and Muslims of this region constitute more than one third of the entire Muslim population of the world.

The region is a rich site for the study of Islam. Almost 70 percent of the world’s Muslims are in Asia and the largest number of them live in South Asia. Of Indian Muslims the largest number is found in North India especially in UP and Bihar. Awadh is an important region in terms of Muslim culture.

Islam was introduced to South Asia almost immediately after being founded in Mecca in present day Saudi Arabia. It has a history of more than 1000 years in the the region. Most historians point out that it was never the imperial agenda of Muslim rulers in India to force Islam upon people. Islam spread to different parts of the region from the abode of mystics who provided solace to lower Hindu castes, inspiring large numbers to embrace Islam that professes the equality of all human beings. Till 1857, adaptation and accommodation remained the main focus of Islam in South Asia, resulting in a civilisation largely cut off from the original crucible of Islam in the Arabian Peninsula.

In South Asia, Islam developed independently in the sufi tradition practiced by mystics and in close relationship with Perisan Islam. The Indo-Persian combine continued even after the fall of the Mughal rulers who put great faith in the Chishtiya mystical order that encouraged plenty of give and take between Islamic mysticism and popular Hinduism.

Only return to a friendly way of life between Hindus and Muslims can prevent the country from drowning in hate that is being whipped up by war mongers today.

Muslims at Crossroads: The Changing Face of ‘Lived Islam’ in India by Nadeem Hasnain is published by New Royal Book Company, 2019. 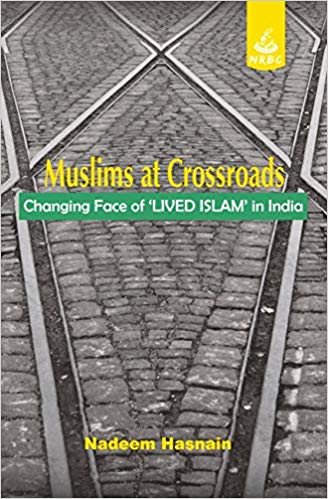