An Attack That Has Wounded the Soul of Lucknow

Lucknow was cosmopolitan long before the letter

LUCKNOW: The recent attack on Abdul Salam, a trader in dry fruits, has wounded the soul of Lucknow. For nearly three centuries Lucknow citizens had managed to practise communal restraint even during the most trying times like Partition in 1947 and the demolition of the Babri Masjid in 1992.

However, when necessary, Lucknow citizens had also united in battle against colonialists in 1857, and later in the people’s struggle to free India from the British. But all temptations to commit violence against each other were discouraged and nipped in the bud by those in charge of the city, which was cosmopolitan much before academics coined the word multiculturalism.

Now this meritorious record of living, and letting others live in peace in the same city, is broken.

Salam, a resident of Lucknow, was badly beaten up the other day by fellow residents. The thugs continue to pose as self styled nationalists, clad in saffron coloured kurtas and wielding lathis. They try to justify the violence against Salam whose origins are traced to Kashmir. Salam was targetted and brusied because he aroused the anger of these so called nationalists. He was accused of being guilty of making a living selling dry fruits in a makeshift pavement shop in Lucknow, after a suicide bomber blew up a CRPF convoy in Kashmir’s Pulwama area last month, killing 44 jawans.

The murderous attack on Salam in Lucknow for a tragedy that occurred in Kashmir is ironic because the city has been so gracious to Kashmiris in the past. Generations of Lucknowalas have grown up being fed on mouthwatering goodies still found at Keshav’s, and at the Kashmir Fruit Mart in the heart of the iconic shopping street, Hazratganj.

The first Kashmiris to come to Lucknow were the Kunzrus followed by the Kauls, Muttoos, Kichlu, Ganju and Sopori from 1775. This highly educated community was valued in the city for having produced great talents like the poet Daya Shankar Kaul ‘Nasim’ who died in 1843.

Shia families from Kashmir joined Kashmiri Pandits to serve as administrators and tutors to the nobility. Tafazzul Husain Kashmiri was valued for his scientific knowledge. From a family of Kashmiri traders, he was educated at the Farangi Mahal, specialising in rational science studies. He learnt English from the Europeans he met at the court in Lucknow, and knew enough Greek and Latin to translate texts into Arabic. His greatest contribution was to convince orthodox Muslims that the earth revolved around the sun and not the other way around.

The shia Muslim rulers of Lucknow were in charge of the region between 1775 and 1857, and they were most respectful of Kashmiris.

Along with a close knit community of Europeans, Lucknow was home to many a Buddhist and Jain pilgrim, and traders from all over the world. Kashmiris too came here in large numbers. The rulers were a tiny minority of shia Muslims but they felt secure enough to welcome human beings from different parts of the world and from different walks of life, who only enriched local life with the aesthetics that they brought with them.

Due to the open door policy of the administration there was a boom in the city’s demand for all kinds of luxury goods and services. That economic boom drew a host of traders and craftsmen to Lucknow also from the Kashmir Valley.

Due to repeated attacks by Afghan warriors in the 18th century, Kashmiri Pandits had fled the Valley to make a home in Lucknow from around the 1740s. Some went to Delhi first and others to Faizabad. They were employed as daroga, diwan and tutors. At the start of the 19th century Kashmiri families in Lucknow totalled nearly one thousand.

The Kashmiri Mohalla still stands on raised ground near the old market called Chowk. It was founded between 1775 and 1778 by Kashmiri Pandits who built magnificent havelis.

The culture of the Kashmiri Mohalla was in essence syncretic and drew its influences from many traditions.

It was no fortress but an open place for the exchange of ideas and cultural practices defined more by shared intellectual and cultural interest, than by divisive thoughts of merely the religious identity of its inhabitants.

The Kashmiri Mohalla was a bustling center for all social, cultural, educational and religious activities. Here Kashmiriyat was kept alive by the intelligentsia, pandits and chefs who whipped up regular feasts for nearly all of Lucknow to enjoy.

In 1780 a large Shiv Mandir was built in the Rani Katra neighbourhood of the old city with an impressive statue of Sankat Devi. The temple is still there and hopefully continues to serve as yet another congregation point for beings to meditate upon the noble truth of vasudhaiva kutumbakam, assuring each other that humankind is indeed one large family.

It was expected that this way of life practised for centuries is now embedded in the air and water of Lucknow. Apparently not! Fellow citizens are polluting the inclusive and respectful-of-the-other attitude of the city, which has been shocked after the recent incident of violence in the name of serious national problems that are not of the making of individual Indians like Salam. 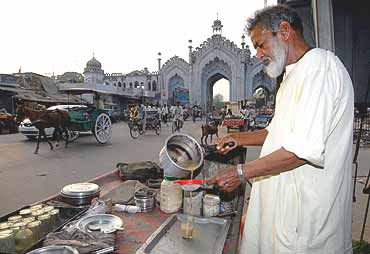