When a City Asks its People to Leave

Is it ethical to make children suffer for their parents’ careers?

For nearly five years, Anil Singh was working as a journalist in Delhi. Over the years, he developed some health issues. Singh decided to leave the city and took voluntary retirement in 2010 when he was 58. Singh went back to his home city Patna. After one year, he was diagnosed with a lung disease. Singh kept coming to AIIMS pulmonary department for three years until his doctor advised him not to come to Delhi. Singh now consults his doctor on phone.

“I would live in Delhi, if the air allowed me. I was even planning to get a flat there but not anymore. I want to return but I cannot breathe in that air at all,” Singh says.

He is one of many people who are leaving Delhi because of the city’s toxic air. There are many more who are facing health issues and want to leave the city, but do not have an option.

In January a Supreme Court judge observed that it is better not to live in New Delhi, as the national capital has become “a gas chamber.” While hearing a matter related to air pollution Justice Arun Mishra said, “Earlier I was attracted to live in Delhi, but now, no longer. There is so much pollution and traffic congestion. After retirement, I will not stay in Delhi. It has become a gas chamber.”

Dr Vivek Nangia, head of the pulmonology department at Fortis Hospital says, “If a person can leave the city, definitely they should go somewhere else. But the majority of people I see do not have an option.”

Nangia added, “Hospitals are swelling with patients because of the air pollution. People who are coming from outside are facing difficulties. Soon they catch allergies, asthma, chronic obstructive pulmonary disease (COPD) and other respiratory diseases. I see daily 80 to 85 people suffering from such diseases.”

Abhay Kumar, 26, lives in Laxmi Nagar and studies at a nearby coaching centre. Two years ago he had moved away from Delhi to Kolkata after facing continuous health issues. Kumar says, “There’s hardly any time of year when I’m not coughing. It was better in Kolkata but I felt disconnected. I found very few opportunities there. I came back here a year ago.

“I am living with medicines and masks and I know I am doing a compromise on my health for my career, but I got no other option.”

Kumar expressed disappointment that his hometown didn’t have fast internet connections or good coaching institutions, or he would have returned home and never come back. He says, “As soon as I get an option, either it is a job or an affordable place with similar opportunities - I will get out of here.”

But many people do not want to leave Delhi, because it is their home. Amar Singh, 75, lives near the Badarpur border, and each year when winter arrives, it becomes part of his regular schedule to visit the AIIMS pulmonary department.

“As the temperature gets lower, it becomes difficult for me to breathe. On smoggy days it is the hardest. I cannot wear a mask because I need to spit the mucus out again and again.”

Apart from hospitals and smoggy roads, the fear of pollution is entering into offices. Arun Kumar, a 24-year-old engineer working at a tech firm in Gurgaon, shares a rumour in his office that the employees of a Noida-based company were leaving one by one because of the toxic air. “It was not true,” he says, “but in our office the management has installed air purifiers. They said they got an offer from a manufacturer.”

However, there are doubts about whether these air purifiers really help. Nangia said a study was underway and soon we would have a scientific answer.

But as Kumar points out, “No matter how long you live near an air purifier, you have to go outside and breathe in the polluted air.”

Gardiner Harris, a New York Times correspondent who came to Delhi on an assignment, wrote in a column that his 8-year-old son developed asthma and faced difficulties breathing here, so they decided to leave the country.

He wrote, “Delhi, we discovered, is quietly suffering from a dire paediatric respiratory crisis.”

He asked whether it’s ethical to make children suffer for their parents’ careers.

Delhi seems unable to find a refuge from its air pollution problem. Delhi’s air is categorised by the Central Pollution Control Board as ‘severe’ and as per a CPCB bulletin, it can make healthy people ill. And it can affect people with existing diseases severely.

Beijing was struggling with the same issue in 2013 when it introduced a set of prohibitions called the national action plan on air pollution. In the year between end 2016 and 2017, Beijing cut the concentration of PM2.5 particulates by 54%. It was termed a “war against air pollution.”

Nangia adds, “People can wear masks but it is not a solution to the problem until something is done by the government at mass scale.”

The problem of air pollution is not only limited to Delhi, it is causing people to suffer and die nationwide.

A nationwide survey, published in the Lancet Planetary Health journal in December 2018, found that around 12.4 lakh people in India died in 2017 for reasons attributable to air pollution.

One in eight deaths in India that year can be attributed to unusually high rates of lower respiratory infections, heart disease, strokes, lung cancer, and diabetes, which are a result of severe air pollution in a certain percentage of cases. 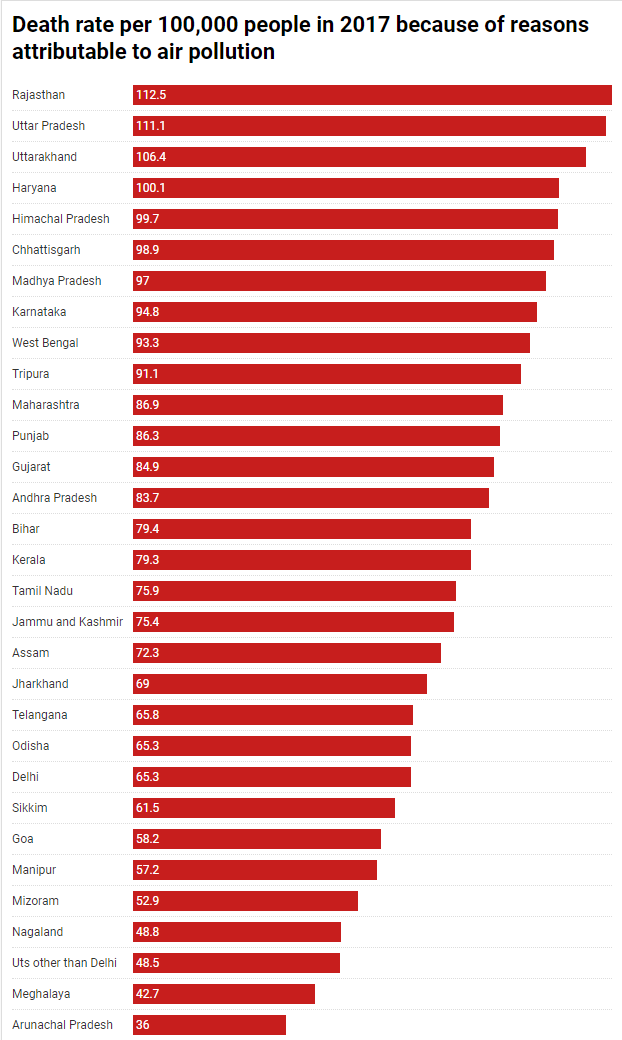 According to the World Health Organisation’s global air pollution database, released in July last year, there are 14 Indian cities among the 15 most polluted cities in the world, in terms of PM2.5 concentration.

The central government launched a National Clean Air Programme in January. The programme has set “a tentative target” to reduce air pollution by 20-30% by 2024. However, in what has become a depressing pattern, it sets out no time-bound actions. It was widely criticised in media reports for having no tangible goals.