The Photographer As The Protagonist

Another milestone film where the audience is witness to two cameras at work at the same time in two different ways is in Alfred Hitchcock’s Rear Window (1954), a nail-biting thriller that reveals how the still camera, in the hands of an ace and intelligent photographer trapped temporarily on a wheel chair can unravel a cold-blooded murder by freezing moments in time and space through an open window.

The photographer is no detective but becomes one when he discovers the magic of his camera while he is imprisoned on a wheelchair. It all began in films, at any rate, with Antonioni's Blow-Up (1966) where a high fashion photographer has his moral come-uppance.

In Aravindan's Chidambaram (1985), e photographer Shankaran, who is the cause of all the upheavals in Sivakami's life leading to Muniyandi's suicide, moves from the position of the spectator to that of active participant, forsaking in the process, his camera.

But the most ideal allegory that comes to mind while watching In Photograph the photographer, Rafi (Nawazuddin Siddiqui) does not place much emphasis on his camera once he befriends Milonee (Sanya Malhotra), distanced from his peer group where he drinks every night and treats everyone to kulfi at the end of the month and listens to old Hindi songs. With the advent of the mobile phone camera and its sophisticated versions, the conventional still camera is fading away from the public domain.

The basic storyline of a street photographer and an upper class girl in Nitesh Batra’s Photograph may carry resonances of William Wyler’s Roman Holiday but it is different because it happens against the backdrop of certain neighbourhoods in Mumbai in an entirely Indian ambience that has shaped the characters and given them a life of their own. It does not take the couple on a holiday making the girl step into pranks she would never have imagined in normal circumstances as happens in Roman Holiday.

It is precisely because of this organic character of the script that flows freely and fluidly from the Gateway of India to the narrow lanes of the shanty that is Rafi’s abode to the old, antique building flat that is the residence of Milonee who burns the midnight oil in an old residential area with the kindly maid placing a mug of coffee to keep her awake, to her coaching class that uses her big picture for its ad posters and so on. The rest of Mumbai – the glamorous neighbourhoods with their fancy shopping malls and nattily dressed residents are kept away from the frame and this adds flesh to the film.

Photograph, after a long time, features a photographer as the protagonist of the film. Not just any photographer but the one who loiters everyday near the Gateway of India in Mumbai to catch tourists and click their photographs and deliver it immediately through a hand-operated machine. The price of each picture is negotiable between Rs.30 and Rs.50 provided you know how to bargain. His sales pitch is hitched to nostalgia and is intelligently framed. The way he delivers the pitch is good enough to attract customers. 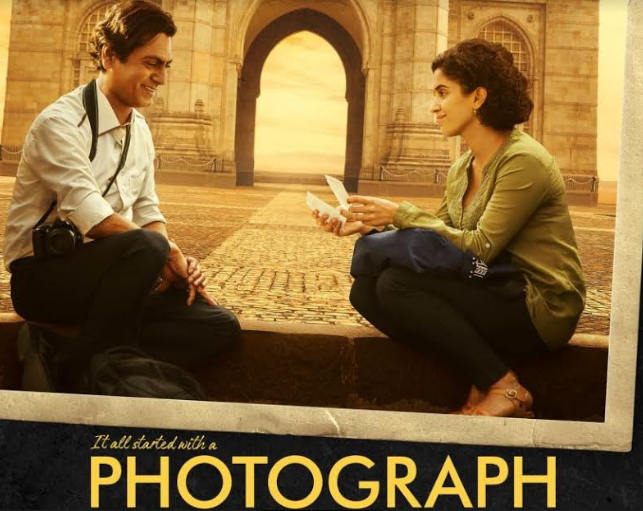 One day, a young girl, Milonee, chances upon him when she has come there with her family. She is no tourist as she lives in Mumbai, belongs to a middle-class Gujarati family and is a topper in her chartered accountancy preliminary exams. The two are poles apart in education, class, social status, faith, language and lifestyle. Besides, there is no articulation of love between the two.

Their communication is through their daily taxi rides to a cheap cafeteria or to a terrible single screen theatre where rodents roam about freely. They do not touch and hardly talk because they have little in common to talk about except the Hindi film Noorie, Rafi’s favourite. Yet, the pull they feel towards each other is palpable even across the two-dimensional images. Milonee’s family has no clue about her clandestine visits including one to the terrible living quarters of Rafi rumoured to also house an invisible ghost called Tiwari who hung himself to death for a love affair gone sour.

It is Rafi’s grandmother who brings in relief raising the film to a new dimension and also saving it from dwindling to boredom. She suddenly arrives from her small town to see Rafi’s “fiancée” who Rafi introduces as “Noorie” having persuaded Milonee to play-act the role to save him from a forced marriage he has no means to support. It is a sparklingly bright performance enriched by the toothless actress gets wise to Rafi’s con game and leaves, depressed.

Mention must also be made of Gitanjali Kulkarni, the splendid, low-key actress from Marathi theatre who portrays the empathetic, live-in cook in Milonee’s house. Nawazuddin melts into the character of Rafi like milk and sugar. Sanya as Milonee carries a freshness and a naiveté a more prominent and beautiful face would have easily eclipsed. She is as fresh as fresh cream thickly laid on a piece of plain cake.

Nitesh Batra perhaps wished to make a film that compliments his wonderful Lunch Box and in a manner that could be true. But it also works as an independent film where every scene is a layered expression of human relationships articulated in as low-key a manner as possible. The film is slow-paced because it is in keeping with the lifestyle of the characters and the neighbourhoods it covers in its small world.

The only drawback is the scene in which Milonee’s coaching class tutor asks her for an impromptu date and she refuses. The sequence where she meets her would-be fiancé and says where she would like to stay in a village is almost funny and it brings a definite “no” from the young man. Bits and pieces of scenes of life, such as the man selling kulfi, the grandmother scared off when she guesses the true faith of “Noorie” add real moments to an otherwise fantasy film.

Photograph is based on several hypothetical premises but it works to appeal to the imagination of the audience, heightened by beautiful cinematography and the lyrically rhythmic editing plus art direction not to talk of the performances by Rafi’s friends who rally around him every evening for their daily booze. Rafi’s camera plays subservient to the photographs he has clicked of Milonee, most of them without her knowledge, which he keeps hidden under the old mattress of his humble bed.

The real bits are the glimpse into neighbourhoods of Mumbai that we do not often get to see in high-powered Bollywood flicks. Photograph mixes fantasy and silent romance with the flesh and blood of a little-seen-but-much-heard-of Mumbai to bring across a film that will stay with you for some time with its silences and its open end.