For decades the veteran Bangladeshi filmmaker Tanvir Mokammel had been troubled by one question: Why was Bengal, known for its passion for the Bengali language, literature and culture, divided in 1947 on religious lines?

Born in 1955, eight years after the vivisection of his homeland, Tanvir should have had no problem with the division which was a fait accompli by then. But being a man of the arts, a film maker and an author, he was unable to take the division in his stride and get on with his life as a Bangladeshi distinct from the West Bengali.

He was in utter disbelief when he learnt of the tearing hurry in which the thoughtless division of Bengal was carried out by the British even as they were on their way out; and of the sordid connivance of self-serving leaders of the Muslim League and the Congress in that act.

Tanvir was distressed by the violence, arson, looting and exodus of millions of Hindus and Muslims across a hurriedly and irrationally drawn border by a British official Sir Cyril Radcliff, who had no clue about the complexities of Bengal’s geographical and social fabric.

The questions which tormented Tanvir were: Was partition necessary? Was there an alternative to it which could have been explored? Who gained and who lost by the division and the two-way exodus? 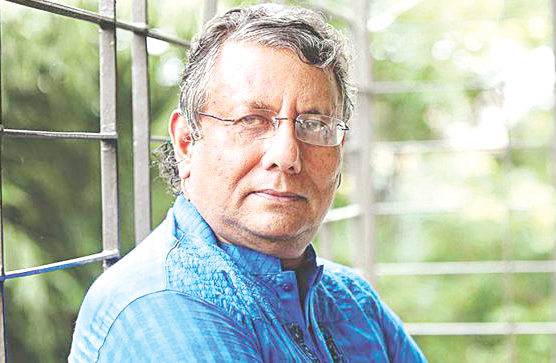 It was not until the second half of the 1990s, that Tanvir got to make a film on partition. “Quiet Flows the River Chitra” on the plight of a Hindu family which refused to migrate to India upon partition, came in 1998. It was a 114 minute feature film on the 16 mm format.

But convinced that there was much more to partition than what he told through “Quiet Flows the River Chitra”, Tanvir came back to partition years later, this time with a magnum opus, a two and a half hour documentary “Shimonthorekha” (The Border Line).

“Shimonthorekha” was shown in Colombo as part of the three-day Bangladeshi film festival organized by the Bangladesh High Commission between March 29 and 31.

Tanvir said that he had few resources when he launched the project to find out from original sources, what partition meant to common people – ranging from farmers and fishermen to government servants, novelists and musicians.

He interviewed a wide cross-section of families from both West Bengal and Bangladesh and asked them how they viewed the past and the present vis-à-vis partition.

The findings were as complex as they were interesting. Some of the interviewees were still traumatized by the past in which they were eyewitnesses of mobs killing or maiming their near and dear ones and making an inferno of their properties. They remembered with horror, the hazardous journey to the border and the squalor of the refugee camps.

But there were others who said that bygones should be bygones and recalled the good things that marked their lives before the 1946, 1947 and subsequent riots which forced Hindus to flee East Pakistan or Bangladesh.

Interestingly, there was no sign of communal rancor among the interviewees on either side of the border even among those who were hounded by rioters. All of them said that riots were an aberration as before the riots, Hindus and Muslims lived in perfect harmony. They recalled incidents and festivities across the religious divide in which they happily participated willingly.

Even though the documentary was made on a shoe-string budget, Tanvir not only shot in the two Bengals (Bangladesh and West Bengal in India) but in various other places in India which were impacted by the partition and the exodus of people.

The lives of refugees, who were re-located far-flung places in India such as Assam, Tripura, the Andaman Islands, the Dandakaranya forests in Odisha and even in Nainital in Uttar Pradesh, were portrayed.

People in these diverse places retraced their past, their joys and sorrows, hopes and aspirations in their adopted homes, giving the viewers an authentic picture of the human aspects of the partition of the Indian subcontinent.

Tanvir did another first: He brought refugees from both sides of the border to their natal villages or localities in the two countries. Despite the time lag, most locals recognized at least the families of the returning migrants if not the visitors themselves. And in all cases, they hit it off with the visitors once memories were re-kindled.

Did partition create an insurmountable barrier between the Bengali-speaking Hindus and Muslims? As per the comments made by the interviewees, the answer is a firm “no”. The two sides can still communicate with each other with ease, as there is much that is common, despite inroads of exclusivist ideologies like Wahabism among the Muslims and Hindutva among the Hindus.

Sadly, the Muslims and the Hindus of Bengal are now increasingly subject to periodic communal political mobilization. Competing nationalisms have created groups to define themselves clearly from the “other”.

According to Tanvir, under Bangladesh National Party regimes, the Bangladeshi State was communal, partly because the BNP was allied to the radical Jamaat-e-Islami. But under the Awami League led by Sheikh Hasina, the State is secular and tolerant but the masses, especially in the rural areas, are coming under the influence of Wahabism. Rural people who go to the Middle East for work come back indoctrinated with Wahabism.

But despite the ever-present danger from the Wahabists, filmmakers of Bangladesh have been tackling bold and controversial themes woven around Hindu-Muslim relations.

Not surprisingly, few on either side of the international border thought that partition should be undone.

“The horrendous partition riots and periodic outbursts thereafter instigated by politicians, had created uncertainties in the minds of the Hindus and a division was thought to be unavoidable,” Tanvir said.

Migration also led to better opportunities and prosperity. Hindu refugees from Bangladesh admitted that they had gained by their decision to move across the border even though in 1947, it was a leap into the unknown under very unsettled conditions.

Hindus from the villages of East Bengal/ East Pakistan/Bangladesh, who settled down in the towns of West Bengal especially the bustling metropolis of Kolkata, acquired an education and seized new opportunities for advancement. Likewise, Bengali Muslims who migrated to East Pakistan from India, got new opportunities in a new country and occupied middle level and high places previously occupied mostly by Hindus.

However, sadly, the vestiges of partition still remain, though only in an attenuated form. Many of the abjectly poor refugees still remain poor. They are categorized as “Permanent Liabilities” and kept in special “PL camps” in West Bengal.

According to “Shimonthorekha”, movement of Bangladeshis across the border still happens, though it is now more due to economic push factors. And many of those who cross the border are Muslims seeking work in India. An estimated 630 Bangladeshis leave for India per day, the film says.

The downside is that the irregular, illegal and temporary migrants or those who indulge in illegal trade, get mercilessly shot at by the Indian Border Security Force (BSF). Bangladeshis bitterly complain that the Indian official and judicial systems do not take into account the human aspects of border crossing which is not always done by criminals, smugglers and terrorists.

Tanvir himself has a dual view on the partition of Bengal. One the one hand, he recognizes the advantages of the division in terms of the opportunities it has provided for the Muslims who had to put up with Hindu domination under the Sena kings and later under the British. But as an artiste, he is distressed by the division of Bengali speakers, as both Hindu and Muslim Bengalis are passionate about the Bengali language and Bengali culture.

“Shimonthorekha” is disturbing in parts but it does give the hope that the two Bengals will relate to each other even as they remain separate entities in the comity of nations.