Srijit Mukherjee has hit the jackpot in more ways than one with Vinci Da.

His story, jointly done by him along with one of the two heroes of the film Rudraneel Ghosh, is a psychological thriller which uses prosthetic make-up for committing a series of crimes.

The story is deceptively straightforward comprised of two characters – an uncompromising make-up man who has attracted the name Vinci-Da for his absolute dedication to Leonardo Da Vinci and a self-confessed, psychologically insane Adi Bose, a serial killer who uses Vinci-Da’s brilliant make-up skills to trap criminals who have been set free for their affluence and influence. Strangely, Adi Bose is convinced that he has a social agenda and a mission to fulfill which is actually a crime.

Leonardo da Vinci has long been lauded as one of the world's greatest thinkers. Not only did he create impeccable artwork (one of which includes the Mona Lisa), he also made his mark as a scientist and engineer, having laid the groundwork for scuba gear and the parachute. Many of his most well-known designs were imagined as machines of war such as a helicopter, a crossbow, and triple-barrel cannon — but as a recent book reveals, the guy also dreamed up a wicked brew for fighting the effects of aging, too.

Vinci Da has researched his subject extremely well but as he refuses to compromise to cinematic demands, he is without much work. So Adi Bose’s veiled approach to make him rich works also because his suggestion of make-up is for a big banner film. 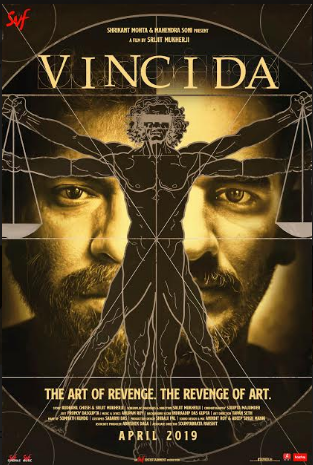 This is the first time that any Indian film has used this unique modus operandi of using skilled and very aesthetic prosthetic make-up in a feature film. Vinci Da is persuaded by Adi to use his face as the model before applying it to the big Tollywood actor. And so the plot thickens till Vinci Da realises he is a partner in crime and there is no exit point. He wants out but the diabolically intelligent Adi Bose spreads out his arms gracefully like the wings of a huge bird, flashes a wicked smile and declares that they are indeed “partners in crime.” The idea is that Vinci Da would make Adi up to look exactly like his criminal target and commit a similar crime to trap him for good.

The suspenseful prologue enacted with brutal coldness by Ridhhi Sen provides the chilling back-story to a criminal who grows up to become Adi Bose. Though this establishes an impressively shocking beginning, it does not tie up smoothly to the adult Adi Bose and the audience is left to assume that he is the younger Adi Bose who his mother abandons after his prison sentence taking him to being “not all there.” That tiny scene of Riddhi walking aimlessly in the jail corridors his face devoid of remorse is chilling.

This is an original line of thought – crimes of “identity theft” where only the physical appearance is faked perfectly and there is no call of faking of documents and other things. The betel chewing police officer whose vocabulary is filled with invectives and slang is reduced to a zero and this is another brilliant cameo by Anirban Bhattacharya. Sohini Dasgupta as Vinci Da’s stuttering girlfriend is convincing in performance and in get-up. But why she does not scream or break free when she is held captive is a mystery.

Rudranil Ghosh as Vinci Da and Rittwik Chakraborty as Adi Bose put in incredibly marvellous performances that almost fades out everything else in the film – the music, the songs, the setting of the discussions in Vinci Da’s home filled with masks and lots of equipment for make-up, lots of colours splashed about, antique furniture to come and rest on these two actors. Vinci Da keeps planning how to opt out and this is where the plot comes down a little.

His final trick is triggered by a very selfish motive. His argument right through the interaction is that it is not for Adi and him to punish others for their crimes which make them criminals too. But he forgets all that and his ideas of morality take a tumble and he decides to “punish” Adi Bose through the same modus operandi – make-up and the final flight with the stuttering girlfriend is also attained through make-up. The loose end that appears out of the blue is the question – how did Adi get to know who Vinci-da’s girlfriend is and what made him capture the entire action on video. 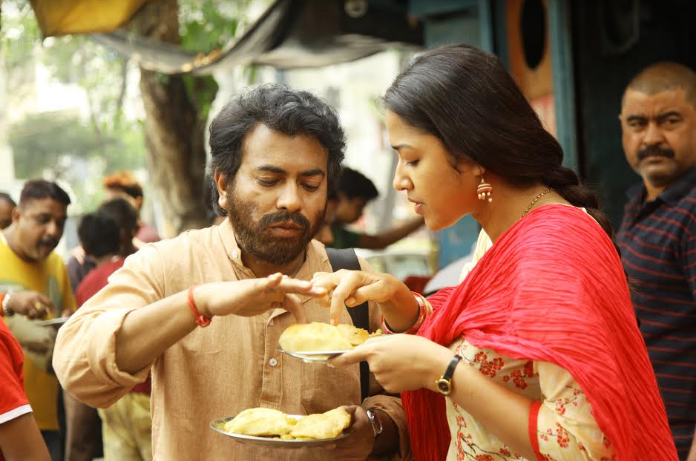 It is as if the crimes yoke Adi and Vinci Da together in a twisted, obsessive relationship – Vinci Da is obsessed with the challenge of the best make-up while Adi Bose is obsessed by his intention to commit crime through his twisted and perverted logic to use make-up for an identity theft. Identity theft also implies impersonation – the taking on of another personality in order to incriminate him.

The biggest hero of this film is Somnath Kundu, the make-up artist who commands the entire show from behind the screen and does it smoothly and seamlessly. Though he holds an Honours degree in Bengali, he is a third generation artist in the Bengali film industry for years together, much-in-demand by all actors here. The actual process of making up Adi again and again, trying out different colours, masks, looks and so on form an integral part of the narrative which adds depth to the theme. Vinci-Da’s voice over in the beginning also emphasises the details of the art and science of make-up while throwing up his uncompromising approach to his work.

Srijit Mukherjee’s Vinci Da is the best psychological thriller to have been made in Indian cinema in recent times that does not resort to any surrealism for the crimes. It neatly fits into the description of the psychological crime thriller defined by Martin Rubin in his Thrillers. He writes: “In the psychological thriller, the identity of the criminal is usually revealed right away, or, at least, very early on. This enables a more detailed and open treatment of the emotional pressures experienced by the criminal, by those characters threatened by the criminal and by those characters close to the criminal or victim.”

Srijit weaves a fine blend of form and content, of characters and incidents, of ideology and crime, of narrative and cinematographic space to make Vinci-Da a must-watch film you just might want to watch again, never mind that you know that “the Butler did it.” 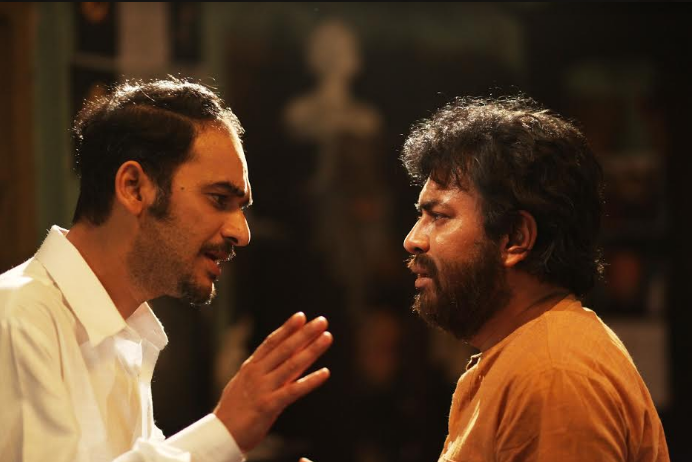