Nothing to do is beautiful

The Char Dham Yatra is for those on a divine quest. Rundown commercial hill stations such as Shimla, Mussoorie or Nainital are for the herd. Ladakh, sadly, is being raided by the ones smitten by the Bollywood movie 3 Idiots. That leaves us—the atheists, the seekers of quiet, the lovers of nature, the non-shoppers, the contemplators and the slow-paced ones—with Harsil. And thank God for that.

Harsil is a small village located right on the bank of the Bhagirathi river, in the Uttarkashi district of Uttarakhand. It is just 27 kilometres shy of Gangotri, the temple to Goddess Ganga, the river with immense religious and cultural value for the devout Hindu.

But today at least, Harsil makes no tall religious claim. Nor does it possess a Mall Road, which is the delight of enthusiastic visitors to hill stations with a legacy of the British Raj. Nor does it have huge tourist resorts determined to relax every bone and muscle you possess, or specialised restaurants raring to turn every culinary whim into reality.

Most importantly, besides a sleepy and erratic BSNL service, Harsil doesn’t have any network connectivity.

What it does have is a grand view of snow capped mountains, a crystal clear river and gurgling streams running through it, crisp clean mountain air, a little wooden hut of a post office, apple orchards, forests of deodars, oak, pine, spruce, fir, and a voting population of 135 individuals.

There are a few guesthouses and homestays with basic facilities, basic food in some small food joints, and a small cluster of rickety shops. And I love it for this.

The government-run GMVN has a good guest house here which is spectacularly located with rivers on two sides and is well spread out. The place has hot water but serves food only during the yatra months.

At 2,620 metres above sea level Harsil is 600 meters higher than Mussoorie. But instead of being perched on top of a ridge like Mussoorie, it is at the bottom of a valley sharing space with the Bhagirathi.

All this makes Harsil an absolute gem of a place to spend some quality time in.

Also attached to Harsil, is the strange but true story of one Pahari Wilson. 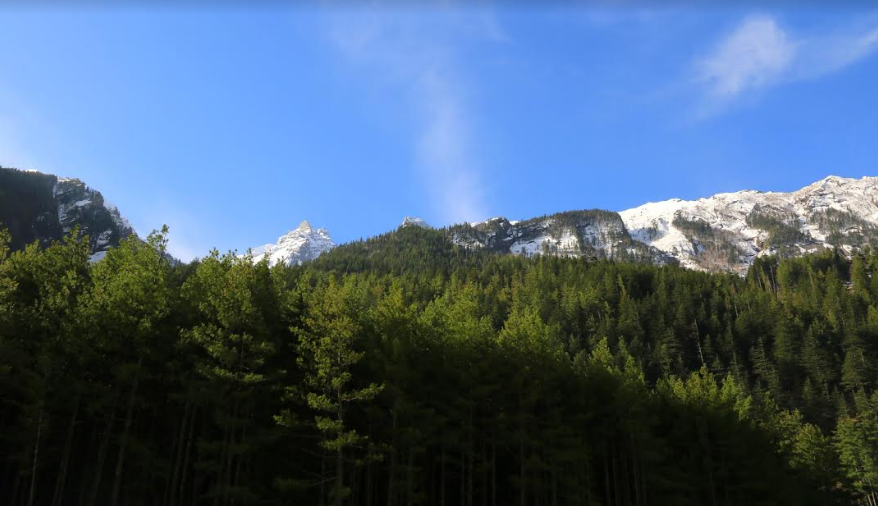 The story of Pahari Wilson and Apples

You will definitely be impressed by the apple orchards here. The invitingly red apples of Harsil share space with the legend of Fredrick E.Wilson, known locally as Pahari Raja or Pahari Wilson.

For he is the one who introduced apples to Harsil, besides a few other things such as potatoes. That was way back in the 19th century.

In the words of Rudyard Kipling, Wilson “lived a life that would have been the envy of the kings.” As the story goes, Wilson was the first white man to permanently settle in the Bhagirath Valley.

People still talk about the legend of Pahari Wilson, an adventurist, crediting him with a lot of deeds and misdeeds done here.

Born in Wakefield, Yorkshire in 1817, Wilson served in the British Army till he deserted during the Anglo-Afghan wars (1839-43). Penniless and hunted by the army, he found his way to Garhwal. He is said to have arrived in Mussoorie in 1841 and caught his first glimpse of the Garhwal Himalayas from Mussoorie’s high point of Lal Tibba. Drawn by the majestic beauty of what he saw he went in further till he reached Harsil, where he settled.

Presently he met the King of Garhwal and impressed him enough to garner a contract of timber from him. Soon Wilson was thick in the timber business, and the rich forests around Harsil were under threat. Over the next few years he cut down the huge forests of deodars around the town, and sent the wood floating down river, fulfilling the enormous British demand for timber needed for the massive railway projects underway.

Wilson is also said to have helped the British during the Revolt of 1857, also known as the First War of Independence. His improved relations with the British meant that he was soon forgiven for his desertion, and could now live a bigger life.

Wilson’s success in the timber trade made him so powerful that he even started to mint and issue his own coins. Soon he introduced apples into the region—giving it its biggest cash crop and uplifting the local economy—as well as potatos and green beans. He had several bridges built in the area, including a 350-foot suspension bridge over Jadh Ganga in Bhaironghati.

All of this made him a popular figure in the region and a sort of legend in his own lifetime.

Once settled in Harsil, Wilson married a beautiful Pahari girl Gulabi from the nearby village of Mukhba. Gulabi was his second wife, who bore him three sons. His first wife was Raimatta, who is also said to be from Mukhba village and was said to be even more beautiful, but she remained childless.

He had a huge bungalow built in Harsil, known as Wilson Cottage, in the 1850s. He died on July 24, 1883 and he and his wife are buried in the Camel Back Road Cemetery in Mussoorie.

Today Wilson is seen as both hero and villain. He was the man who gave a great filip to the local economy by introducing cash crops, bridges and roads, some of which still survive. But he is also seen as a mercenary who fuelled by pure greed denuded the Harsil region of its pristine forest, and hunted down almost all the big wild animals.

It is said that the local god Lord Someshwar cursed him for his nature-destroying act. As per the curse, Wilson’s sons would waste his fortune and his line would end with them. That is actually how it turned out. But still, every winter Harsil Valley gets decked up beautifully with Wilson’s bright red apples. 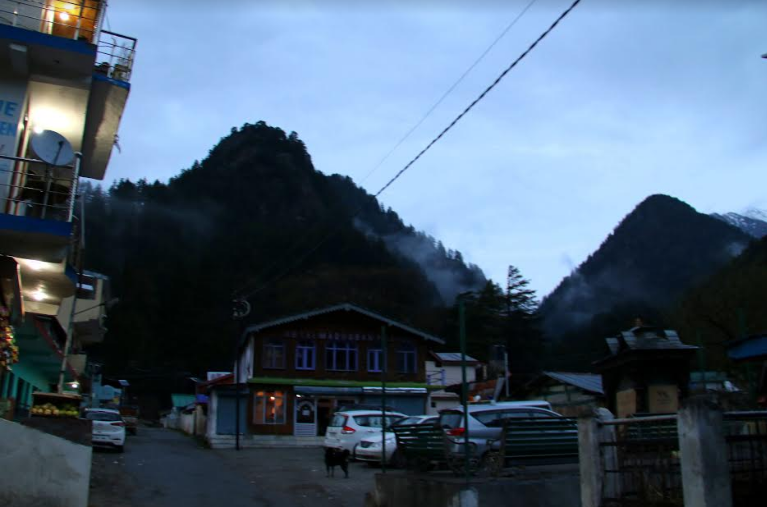 It takes about eight hours to cover the distance of 243 kilometres between Rishikesh and Harsil. After Rishikesh, it is a continuous mountainous road to town. One can reach Harsil through a route that goes from Rishikesh through Chamba, the Tehri Dam, Uttarkashi and Gangnani.

As of now the road up to Chamba is undergoing a major relaying in various sections, right up to Harsil. An alternative would be to take the Dehradun-Mussoorie route towards Tehri. 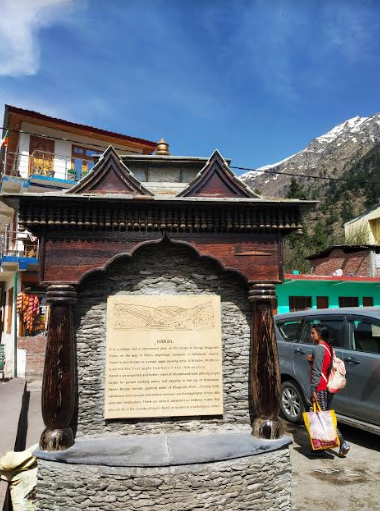 Reaching Harsil takes a lot of doing and you should be happy having made it this far. Once here, it’s time to sit back and relax. I would recommend putting your feet up, contemplating the view and subverting any emanating desire to do anything hectic. A leisurely stroll will suffice the doing here.

A walk along the Bhagirathi or in any other direction will grant you encounters with beautiful scenery. The next best thing you can do is to pick a sunny spot along a couple of other streams that crisscross Harsil, and spend some time watching the sounds of crystal clear water splashing and crashing about on the rocks.

Watch it and enjoy it. If you are feeling adventurous then try and pick a trail on the mountain slope, and reach some hamlet high above or the set of small lakes known as Sattal, a few kilometres uphill.

Thankfully, the adrenaline rush of mountain sports is yet to reach here. 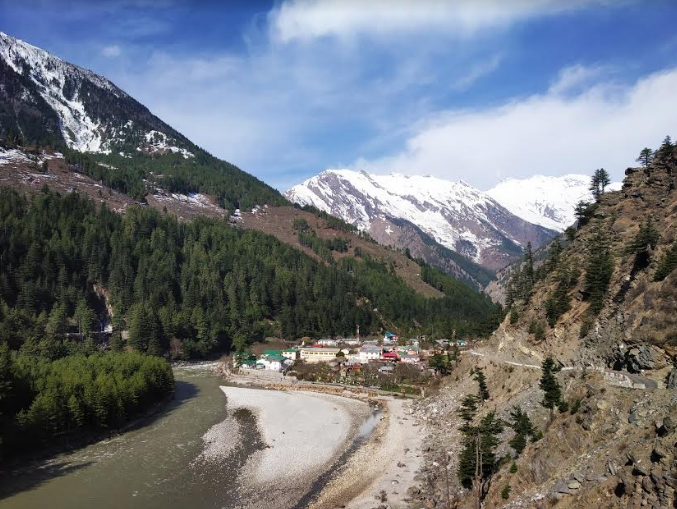 Located in a village some 3 kilometres above Harsil, and reached by a motorable road, the Mukhba Temple is the winter home of Goddess Ganga. Every year after the Diwali closing of the gates at the Gangotri Temple, the goddess is brought to the Mukhba temple for the winter months. The Mukhba temple looks very similar to the Gangotri Temple. It is a nice spot with excellent views. Surely worth a visit. 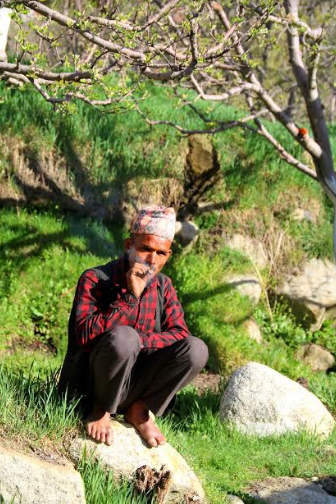 On the opposite side of the village of Mukhba, across the Bhagirathi river but on a lower elevation, is the village of Dharali. In fact, if you continue 2 kilometres beyond Harsil on the national highway towards Gangotri, you will pass through Dharali. Lying on the river bank, Dharali is a small hamlet with a few hotels and eating place. It is picturesque and presents another viable option to stay in the area if you do not get accommodation in Harsil. 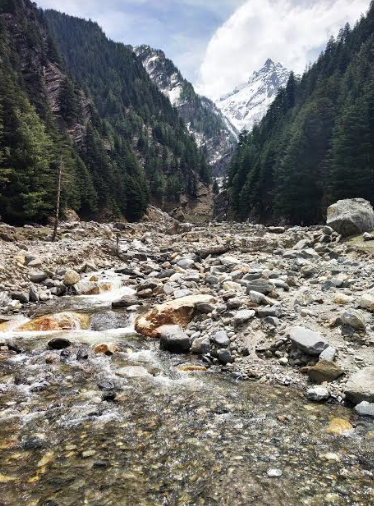 Above Dharali, reached by climbing a moderately difficult, three-kilometre trek through forests of spruce and deodar, is Sattal or Seven Lakes. This is not to be confused with a similarly named water body near Nainital, in Kumaon.

Here you will encounter a number of small water bodies at different levels of elevation separated by short treks. The setting is picture perfect with stretches of virgin snow. In truth trekkers are able to reach a total of five water bodies, and the remaining two are said to be inaccessible or mythical. 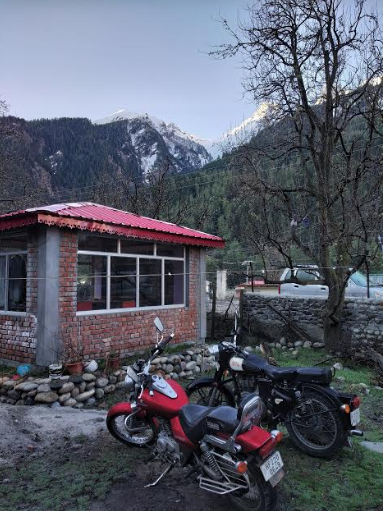 Harsil is best visited through a narrow window of March 15 to April 30, that is just before the Char Dham Yatra begins or at most a few days after. During this time you will still be able to find snow near Harsil.

And then in September or October, before winter sets in.

Harsil can still be visited during the yatra months, from May to September, but expect the accommodations to be full, and it is a good idea to book in advance.