NEW DELHI: Unprecedented violence engulfed the Jawaharlal Nehru University Campus after a mob of approximately 100 goons entered the campus at 6:30 pm. For more than two hours, these goons pelted stones at students, beat them with wooden clubs, attacked professors who tried to intervene, damaged cars and vandalised campus property.

Masked with bandanas and hoodies, the mob came with a predetermined agenda, carrying sticks and rods. They entered Periyar Hostel, Sabarmati Hostel, Kaveri Hostel, Mahi Mandavi Hostels, and other spaces, attacking students viciously. They pelted bricks and stones at the students as well.

The violent mob entered the campus to attack an ongoing peaceful gathering. Professors who tried to protect the students were beaten by the masked goons, who were carrying lathis. Several have head injuries and broken limbs. There was complete terror for the hours that it lasted, with reports now suggesting that the internet has been suspended on campus and Section 144 has been imposed. Students ran with the mobs chasing them, and bludgeoning them with wooden clubs that can be seen in one of the videos below. Girls were attacked with the JNUSU President bearing the brunt. 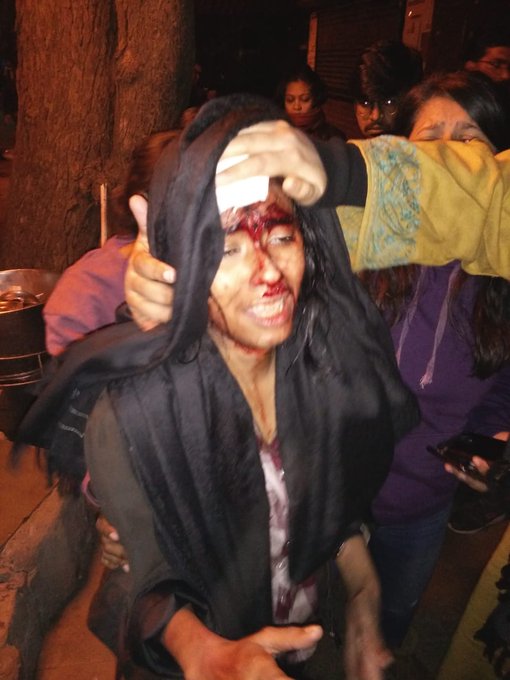 Aishe Ghosh, the President of the JNU Students’ Union was barbarically injured by the masked goons. She has been admitted to the AIl India Institute of Medical Sciences for immediate treatment. She is badly injured as are other students. The exact numbers were not available; at the time of writing, students at AIIMS gave the figures of over 15 at least.

“I have been brutally attacked by goons in masks. I have been bleeding. I am not even in the condition to talk,” she said in a video that went viral immediately on the social media platforms. She collapsed even as she was speaking. Her condition is serious.

“I am at AIIMS, Trauma Centre, 15 students of JNU got admitted here with severe head injuries inflicted through sharp weapons & rods. 2 of the student are in serious condition including JNU SU President and are shifted to red area, all the students were brutally beaten,” tweeted Harjit Singh Bhatti, National President of Progressive Medicos & Scientists Forum (PMSF) 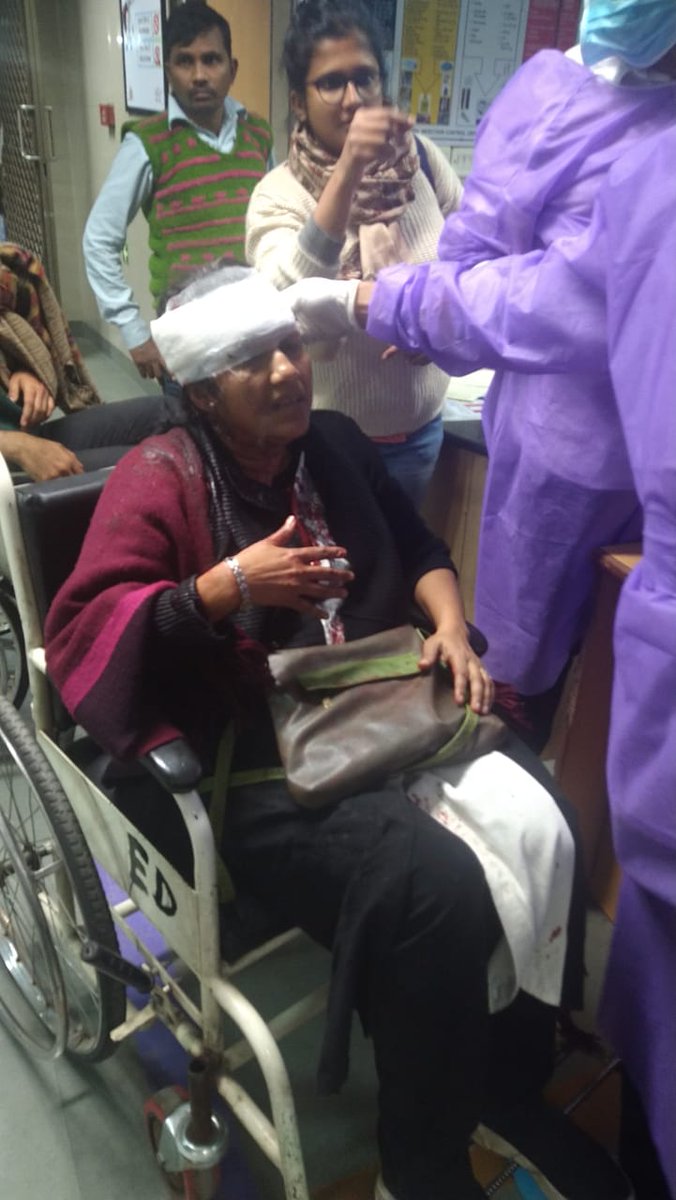 Several other JNU professors had to hide inside the Sabarmati Hostel.

JNU has been in the midst of protests almost continuously since 2014. “Yesterday, in the morning, violence was unleashed by security officials, followed by a scuffle between students. So, today JNU’s teachers’ association at 4 pm organised a peace gathering to speak against the violence at the Sabarmati Hostel,” Professor Atul Sood from Centre for the Study of Regional Development, said.

“This violence has been used to break student-teacher unity as the ethical, moral and peaceful protest by the students is not being broken,” he said. 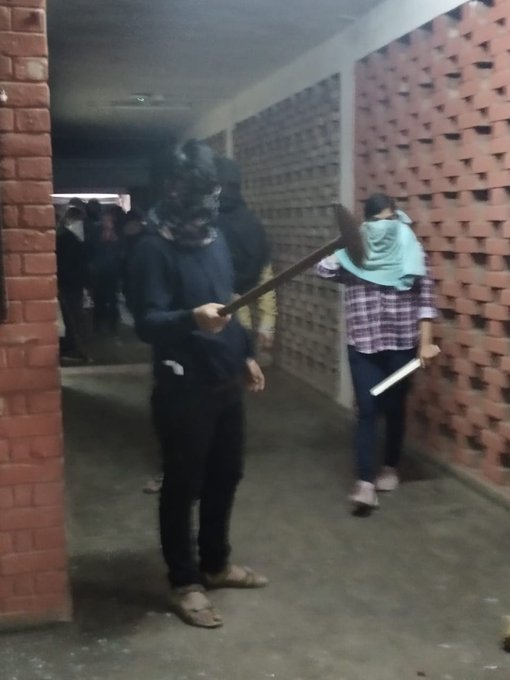 The Delhi Police, stationed outside the main gate of the University Campus, did not immediately intervene to contain the situation.

“Is the @DelhiPolice complicit in the violence unleashed at JNU by masked goons”? tweeted Prashant Bhushan, a Public Interest Litigation Lawyer and activist.

Worried students flocked towards the library, asking for refuge. They also requested the library officials to keep it open after 8 pm, as it normally closes early on Sundays.

Nevertheless, as the decision was delayed, few students gathered outside the library gate.

“Reports coming from JNU point to collusion between the administration and goons of ABVP to inflict violence on students and teachers. It is a planned attack by those in power, which is afraid of the resistance provided by JNU to its Hindutva agenda,” tweeted Sitaram Yechury, leader of the Communist Party of India (Marxist).

“Goons were banging on the doors of the nearby Koyna girl’s hostel. We held an emergency meeting and for now, we plan to stay inside our rooms. There are men entering women's hostel and we don't know what they will stop at,” reported a JNU girl student.

The mob had entered inside the Girl’s Wing of the Sabarmati Hostel, creating massive ruckus.

In contrast, the twitter handle of ABVP has reported a strikingly opposite narrative.

“ABVP Members have been brutally attacked by students affiliated to leftist student organizations SFI, AISA, and DSF. Around 25 students have been seriously injured in this attack and there is no information as to the whereabouts of 11 students,” tweeted ABVP Delhi.

After two hours of the entry of the mob, JNU’s Registrar issued a circular, stating “there is a law and order situation in the JNU Campus. Masked miscreants armed with sticks are roaming around, damaging property and attacking people. The JNU administration has called the police to maintain order.” 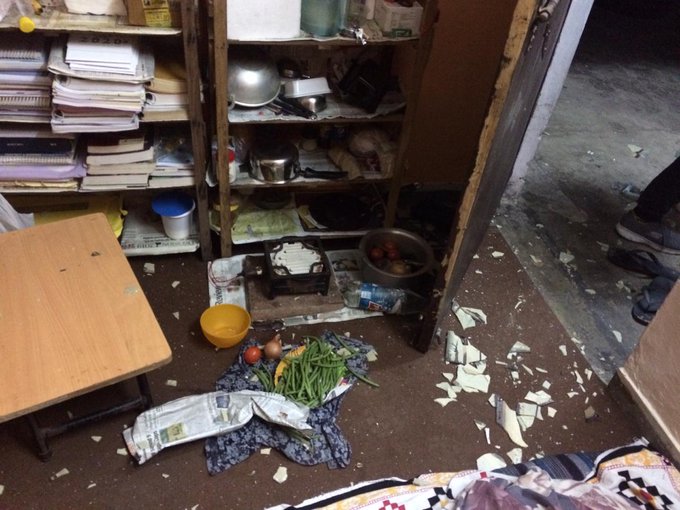 Academic Yogendra Yadav was also manhandled by the police officials and goons outside the main gate of the campus.

There has been no response or statement by Mamidala Jagadesh Kumar, the Vice-Chancellor so far. He was reportedly not on the campus when the violence took place.

Meanwhile, few extremely scared students have started to leave for their respective homes. As of now, there is no concrete detail about Delhi Police controlling the miscreants within the campus. Reports suggest some of the goons are still inside campus. Civil society groups have been sharing addresses where the students can stay.

The JNU authorities confirmed the presence of masked men in the campus. Citizens have begun to gather at the JNU main gate, in peaceful protest - condemning the violence on campis. The Registrar issued the following statement that makes it clear that the students were attacked by “Masked miscreants armed with sticks” who “are roaming around, damaging property and attacking people.” The message reads: 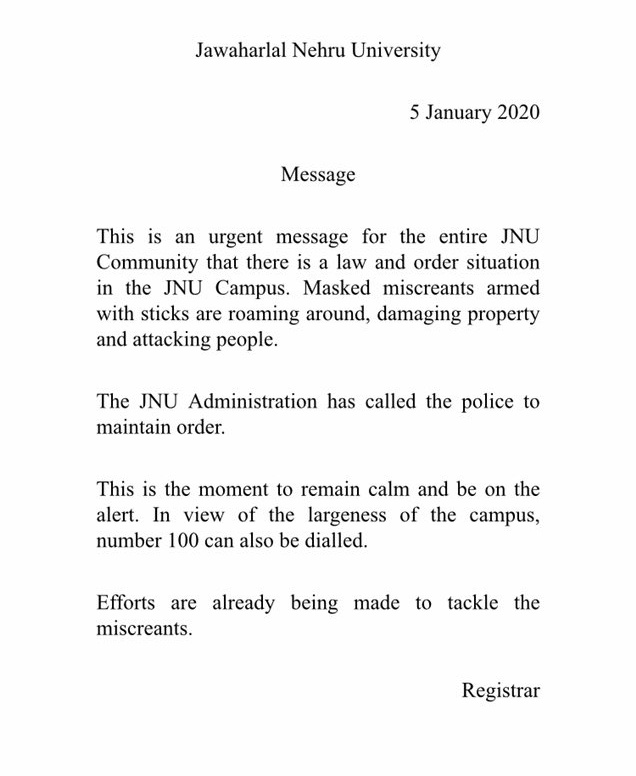 This is repeat of the attack on Jamia Millia Islamia students who were badly injured. In their case the Delhi Police had entered the campus and broken into the buildings, particularly the Urdu Library, to beat the students who were hospitalised with broken arms and legs, and serious head injuries.

At the time of writing, citizens have gathered outside Delhi Police HQ at ITO, condemning the violence. MANISHA SHASTRI is on the spot, and sends these photos: 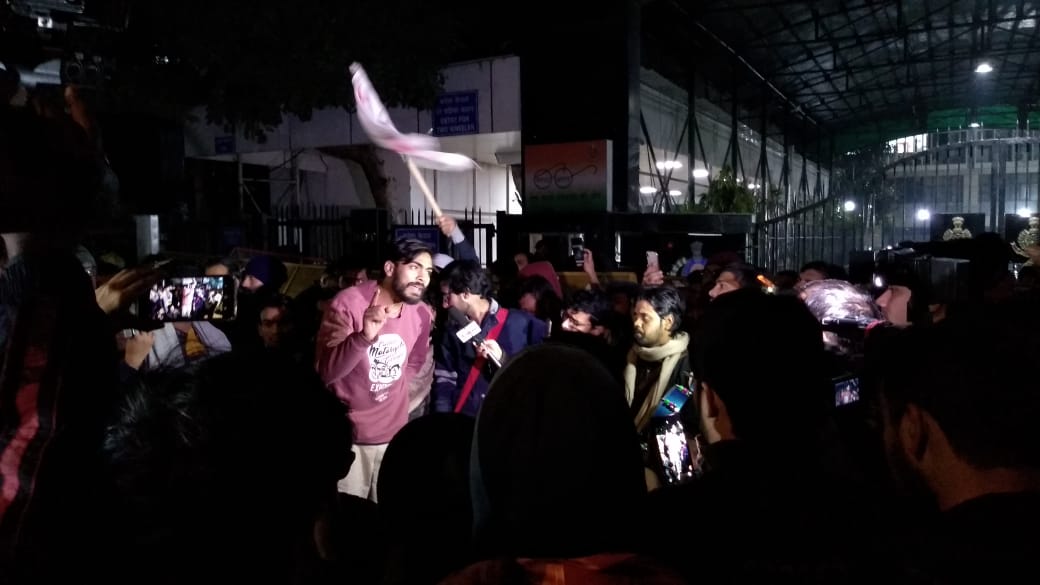 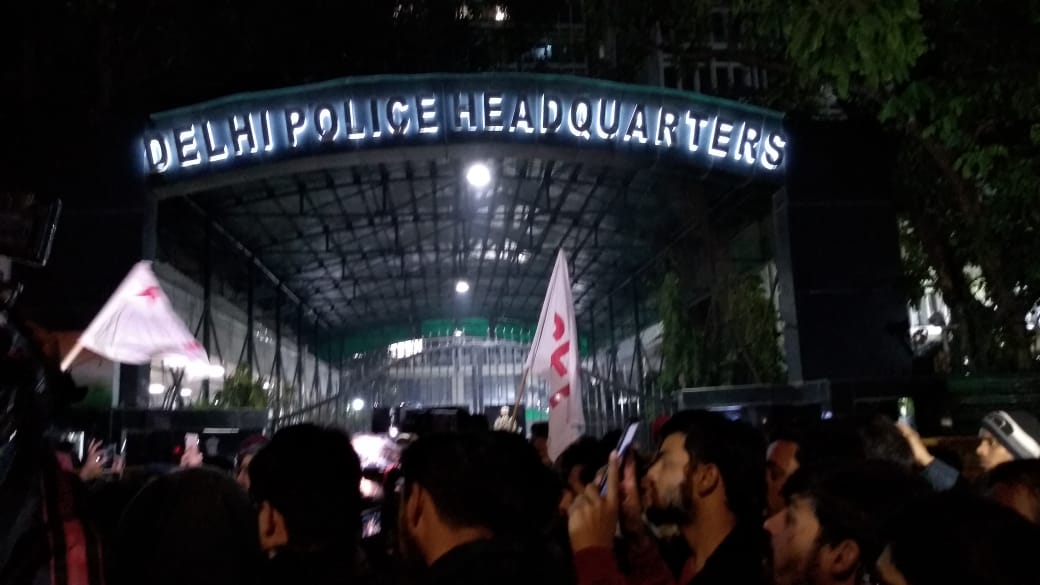 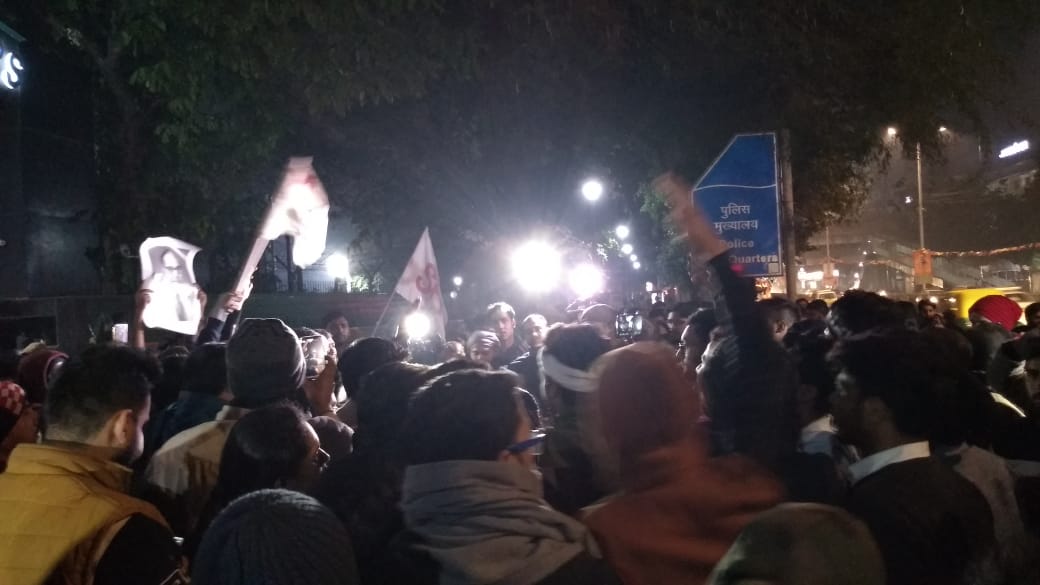 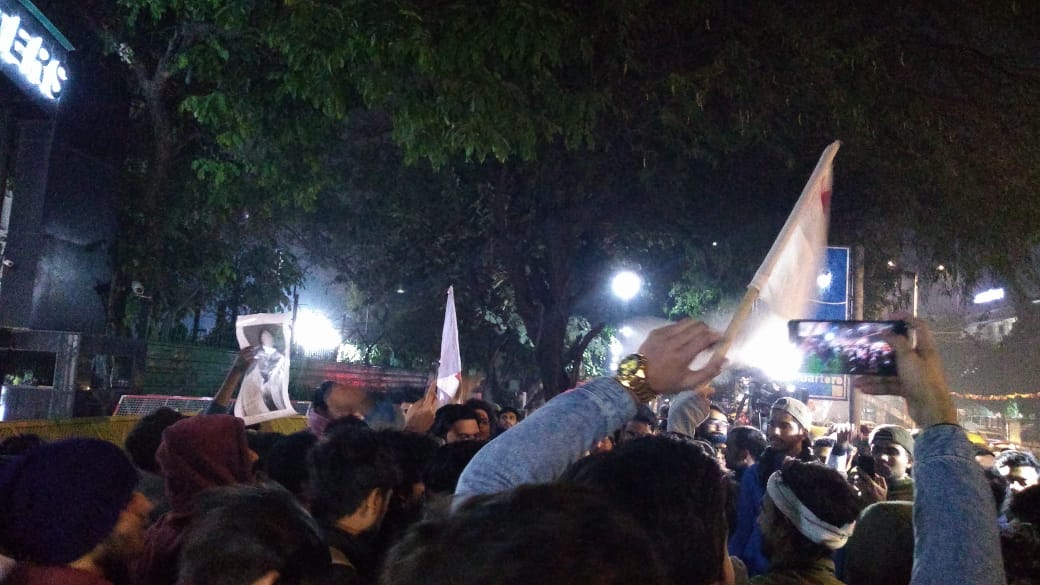 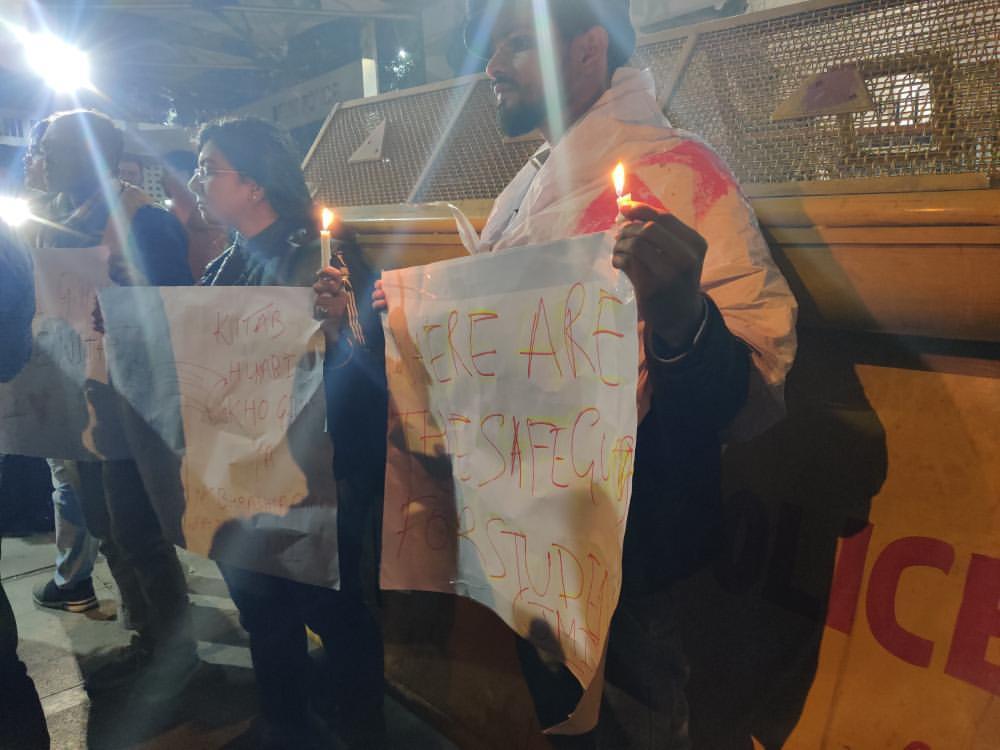 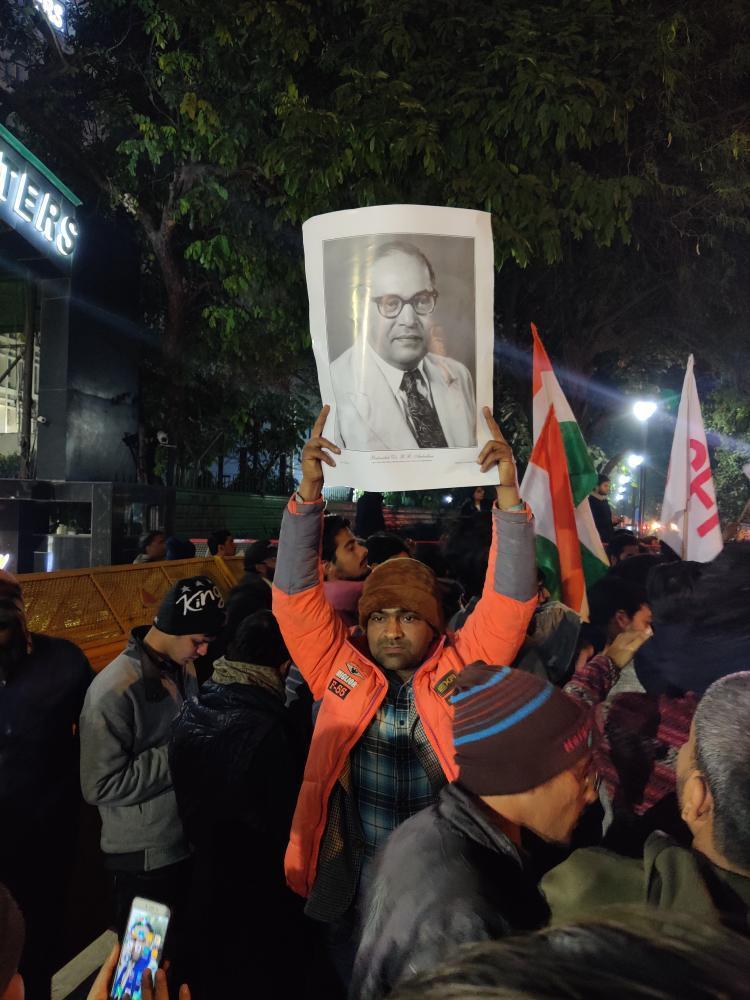 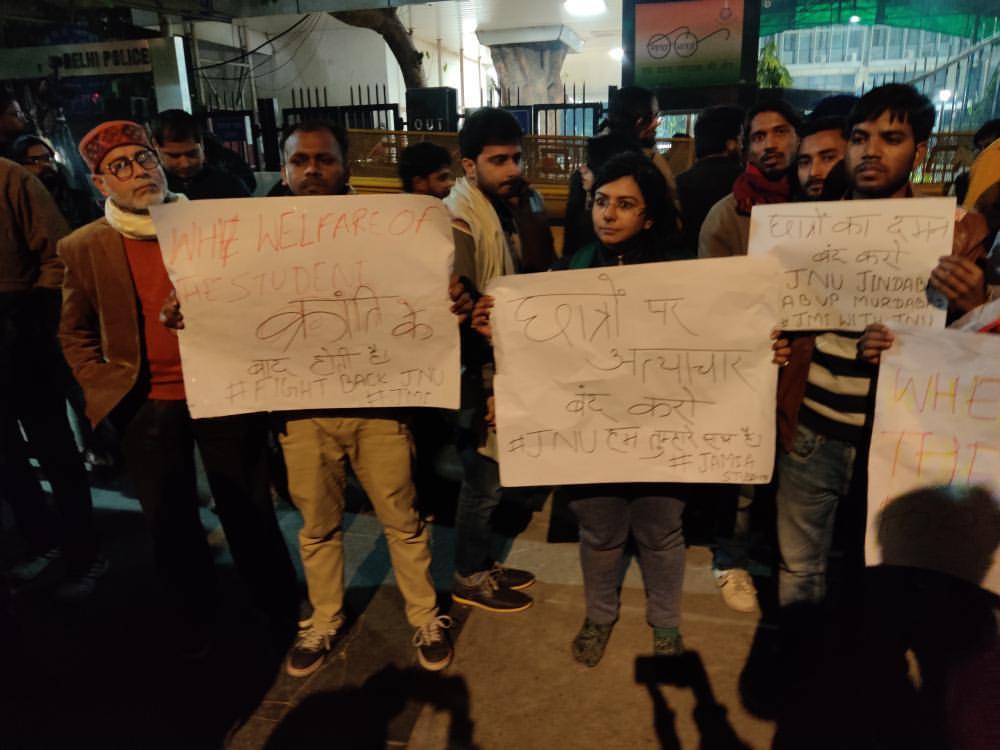 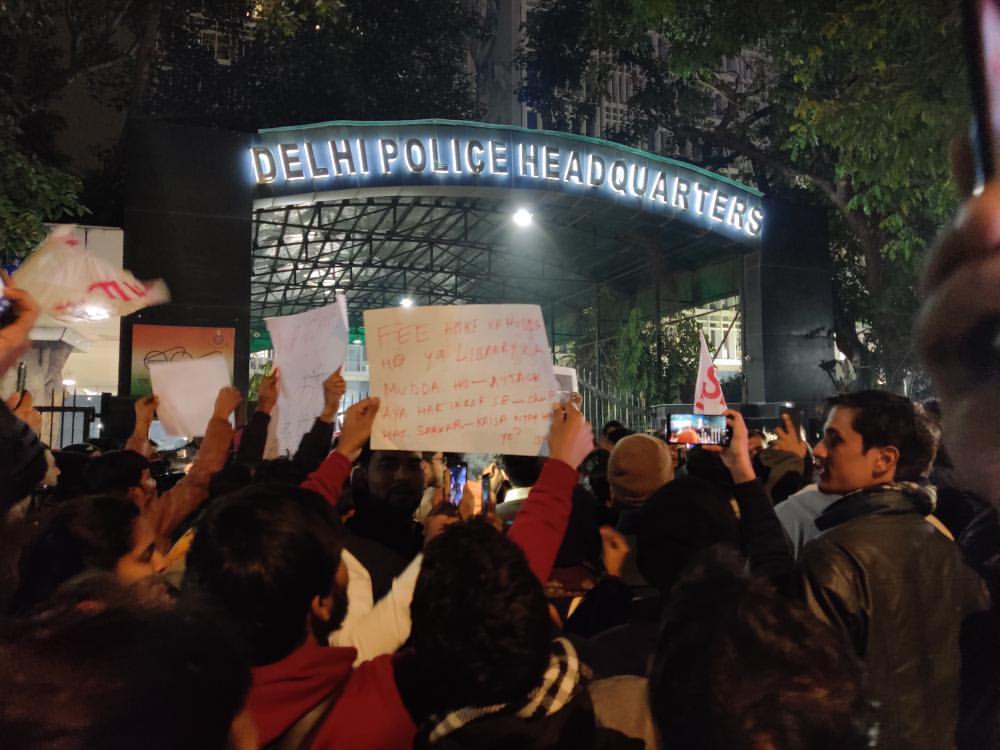