JNU, The Day After

NEW DELHI: After yesterday’s brutal mob attack on Jawaharlal Nehru University campus, injured JNU Student Union President Aishe Ghosh’s spoke to the press this afternoon. She spoke of how she was hit several times with an iron rod on her head, leading to massive bleeding. She was immediately hospitalised at the All India Institute of Medical Sciences Trauma Centre.

Ghosh spoke of the intensity of and trauma caused by the masked mob attack. She said it was students who immediately called the ambulance, else her life would have been in serious danger.

JNUSU has called for the student community to show solidarity.

It has also slammed the Vice Chancellor, calling him a ‘mobster who perpetuates violence in the university.’ The Vice Chancellor, it’s been said, was absent from the campus when unprecedented violence broke out yesterday - during which a masked mob of almost 100 goons attacked students and professors with sticks, rods and stones for almost two hours. 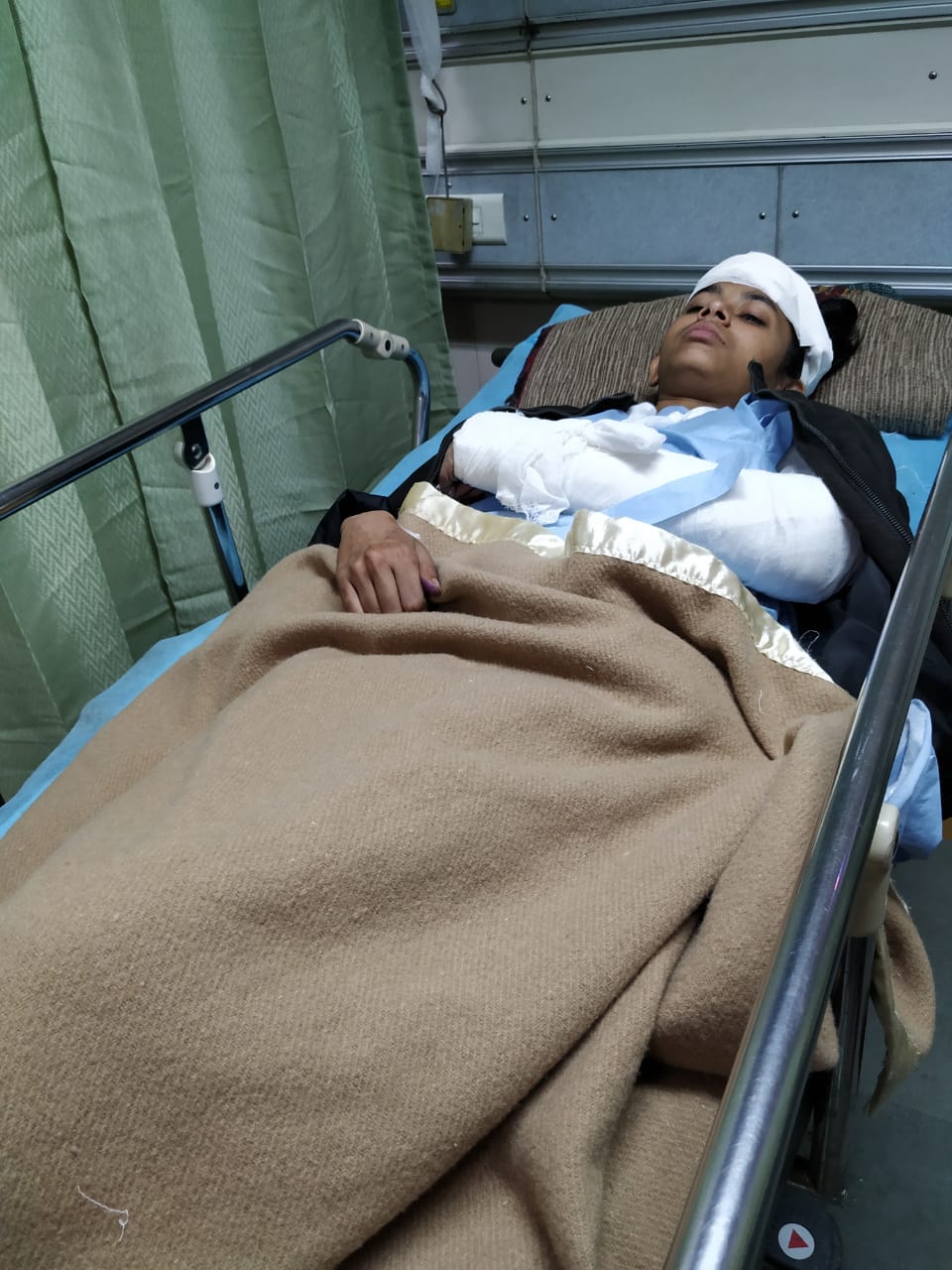 “The VC is trying to put a spin on yesterday's attack, after a long night of meetings with the BJP ITCell. However, everyone, barring him, know what happened, as JNU students still have access to the internet. Every student of this university is witness to the carnage. #SOSJNU,” tweeted JNUSU’s twitter account.

The immediate resignation of the VC is also being demanded by JNUSU.

Towards the wee hours of the morning, a Press Notice was released by the VC, subtly framing the masked miscreants as students agitating against the registration process, shutting down schools, vandalising property and smooth functioning of the university.

Instead of identifying the miscreants and questioning the delayed response (if any) of the Delhi Police officials stationed outside campus, the Press Note merely requested everyone to maintain peace. 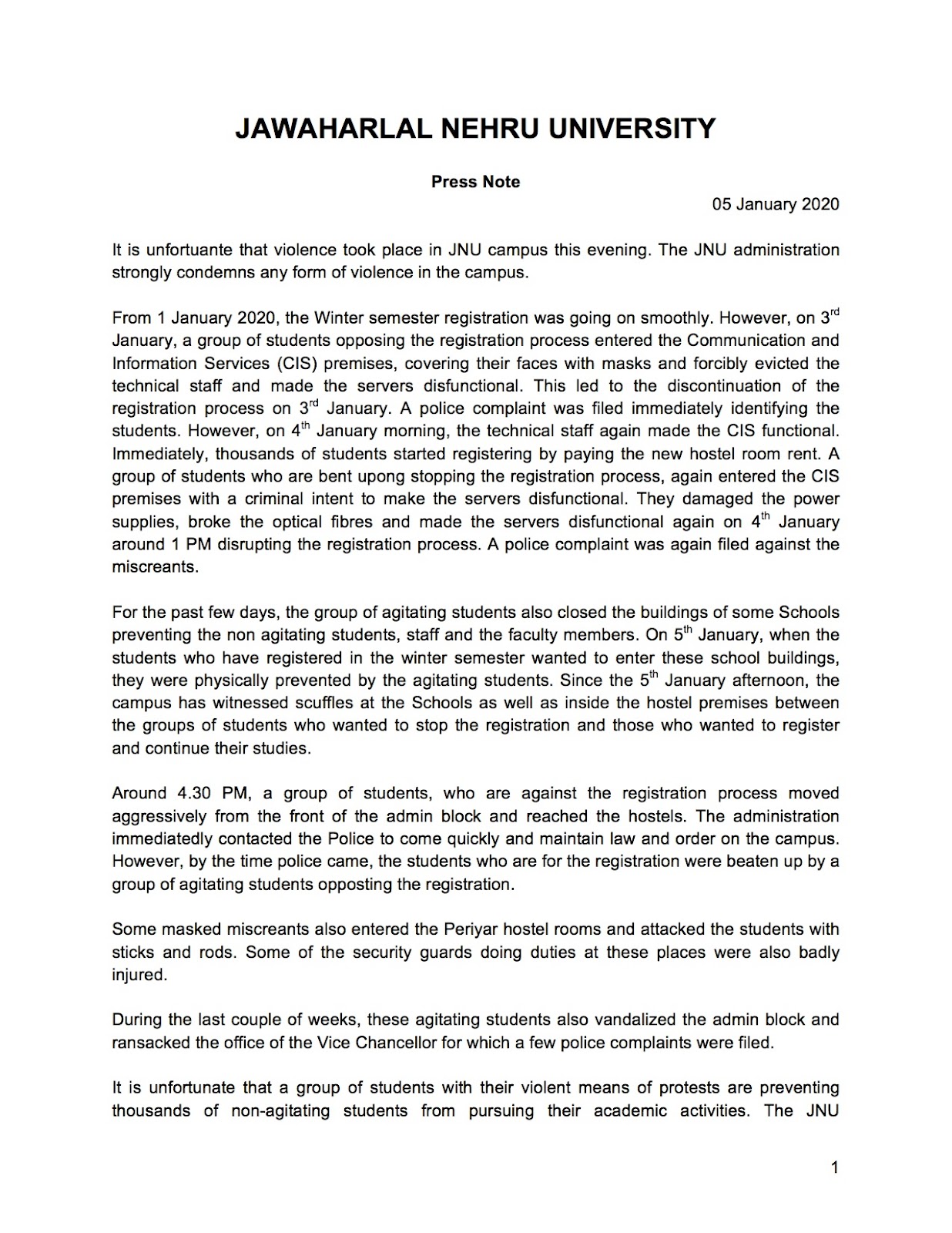 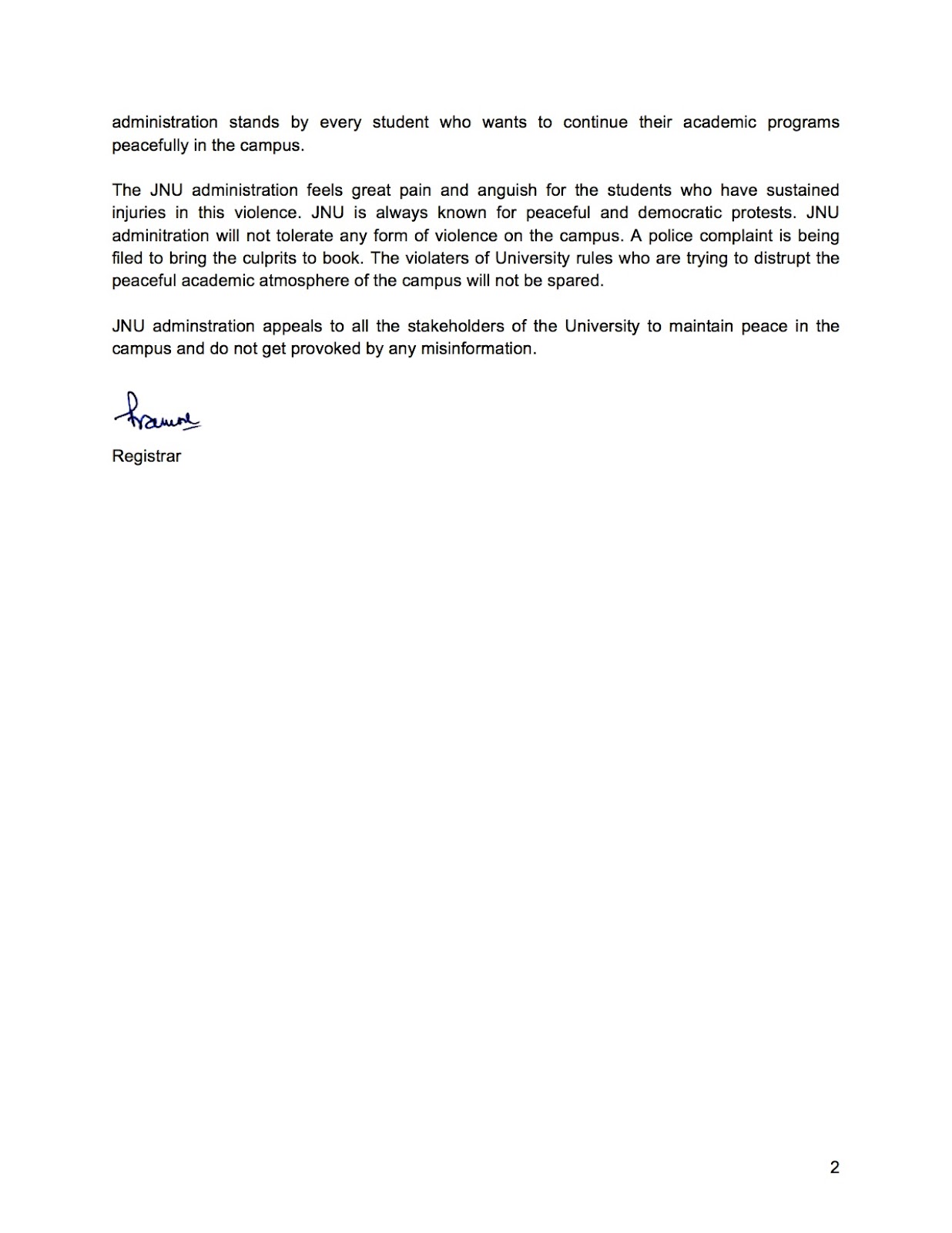 Meanwhile, a peaceful march took place from the Paschimabad Gate (West Gate) of JNU towards the Main Gate at 11:30 pm last night. The march galvanised more than 300 students as well as professors.

They reached the North Gate by 1:00 am and stormed open the Main Gate, which had been locked since 6:30 pm. The street lights for around 1 km around the campus had been switched off.

“All the faculty members had assembled after the march at the North Gate to show solidarity with the students and also to ensure that Police officials did not beat up the students. We were also not allowing the ABVP or Bajrang Dal cadres to continue the violence they had unleashed,” a Professor from the School of Arts and Aesthesis said.

“Let's be clear, these were outsiders with weapons brought in with the connivance of the JNU administration and in full view of the police who were stationed outside well before. These are state supported hooligans,” tweeted Jayati Ghosh, Chairperson of the Centre for Economic Studies and Planning.

Most of the Professors and students returned to their homes and hostels by three in the morning.

Around 20 students were injured in last night’s mob attack. Other Professors who were hurt included Professor Shukla Sawant from School of Arts and Aesthetics and Professor Saugata Bhaduri from Centre of English Studies, School of Languages.

Section 144 was also imposed within the campus.

Sitaram Yechury, the leader of Communist Party of India (Marxist) stated that a FIR will be filed against those miscreants involved, as assured by MS Randhawa, Delhi Police Public Relations Officer (PRO).

Two fact-finding teams will be sent to both the campus and the AIIMS Trauma Centre to investigate the number of students injured, the extent of their injuries along with details of their personal encounters.

Students continue to criticise the JNU administration and their tacit compliance behind the ‘premeditated attack’.

Nevertheless, it remains unclear how the violent masked mob gained entry inside campus premises. As far as their dispersal is concerned, it remains uncertain.

At the time of writing, protests continue within and outside campus, condemning the attack and police inaction against the perpetrators.