NEW DELHI: Professors, lawyers, and activists came together at the Constitution Club of India to talk about the police brutality in Uttar Pradesh and the detentions that followed.

The conference began with Professor Apoorvanad from Delhi University speaking about the lawlessness and the police brutality in Uttar Pradesh. He stressed on how Muslims were specifically targeted during the shutdowns in Uttar Pradesh.

Professor Avinash Kumar said, "People vaguely know about the effects of NRC on UP. We need to look at it in three dimensions 1. Yogi's narrative of 'revenge'. Which is where the narrative of violent and aggressive protests. We need to question this. The narrative often ignored is the narrative of the ones affected by police brutality. This 'badle ke rajniti' has led to all institutions of the state to get involved in the same trope. The existing criminal laws have been manipulated and distorted to justify this trope. The inadequacies and loopholes of the laws are ignored. In the name of detention, underage children have been tortured and beaten. The misuse of section 144 of the CrPC to justify a 'crackdown' is shameful. No other government has furthered the narrative with the help of internet shutdowns and went on to justify them. The police targets protesters while filing an FIR against them."

Simran Verma, Sadaf Jafar’s niece was also one of the speakers. “I’ll tell you why my khala was arrested” she began, “It was because she was a Muslim woman who dared question the government. Her fault? She asked the policemen why the cars and bikes were burning, and she had the whole thing recorded on Facebook live. We ran from pillar to post searching for her for two days. People who asked about her were detained too. In Lucknow, we don’t have a voice.”

Sadaf Jafar is a Congress activist and actor who was arrested on December 19, 2019 in Lucknow amidst an Anti-CAA protest on charges of rioting. Jafar’s family wasn’t informed about the arrest. Jafar claims that during her detention, she was beaten by male police officers and was brutalized. Her arrest was condemned by Priyanka Gandhi and filmmaker Mira Nair. Jafar’s bail plea was accepted last Saturday. As her niece claims, when the judge asked the police about the evidence against her, they had no answer. Jafar was released from prison yesterday.

Ravish Alam, an activist said, "The places in UP that have been targeted by the police are: “Muzaffarnagar, Meerut, Firozabad, Lucknow, and Bijnor. In Muzaffarnagar, a peaceful protest was abrupted by a mob of RSS, VHP, and Hindutva goons. The Muslim shopkeepers closed their shops out of fear. The next day, notices were given to them for aiding the stone pelters. The shopkeepers were told that their shops would be claimed if they failed to pay the bail amount. Houses of the shopowners were raided, their belongings were broken, money and jewelry were stolen too. In Meerut, Muslim neighborhoods were targeted again. A rickshaw puller who was just smoking a beedi was shot in the head by the police. There are multiple cases of murder by the police were the victims were shot in the head and chest. I wish to know why does the UP police never issue the order of Section 144 over social media if its in the interest of public safety? And why are the Press Releases never available online?”

Veena Rana, an activist and the wife of actor-activist Deepak Kabir who was arrested after he went to a police station to ask about his friends who had been allegedly been detained by the police. Veena Rana went on to speak about the lawlessness in UP during the current Chief Minister’s reign. “The Atmosphere of fear began around December 17, and then the internet was shut and people were being detained at random.” During the conference, news of Deepak Kabir’s bail came in. 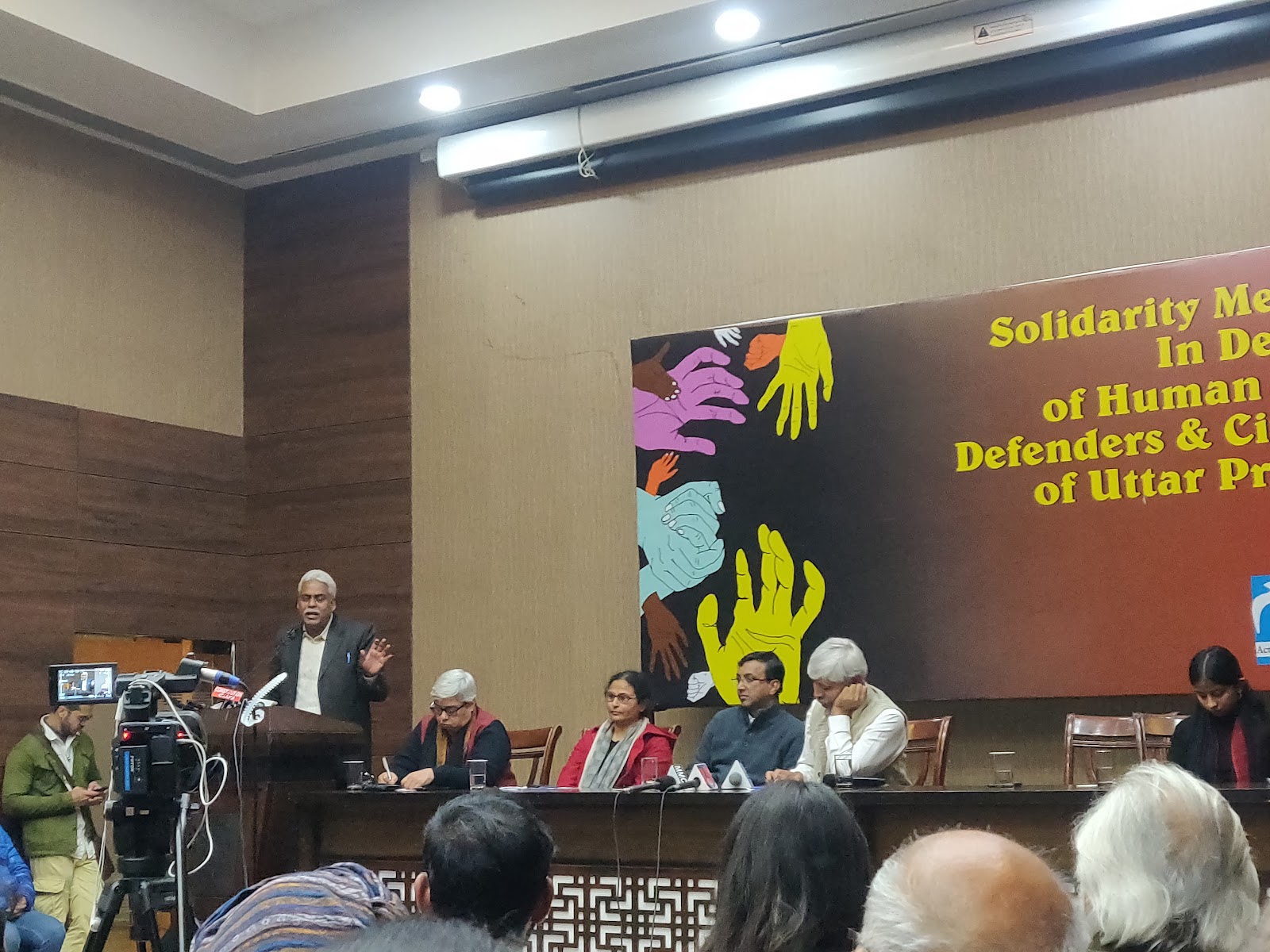 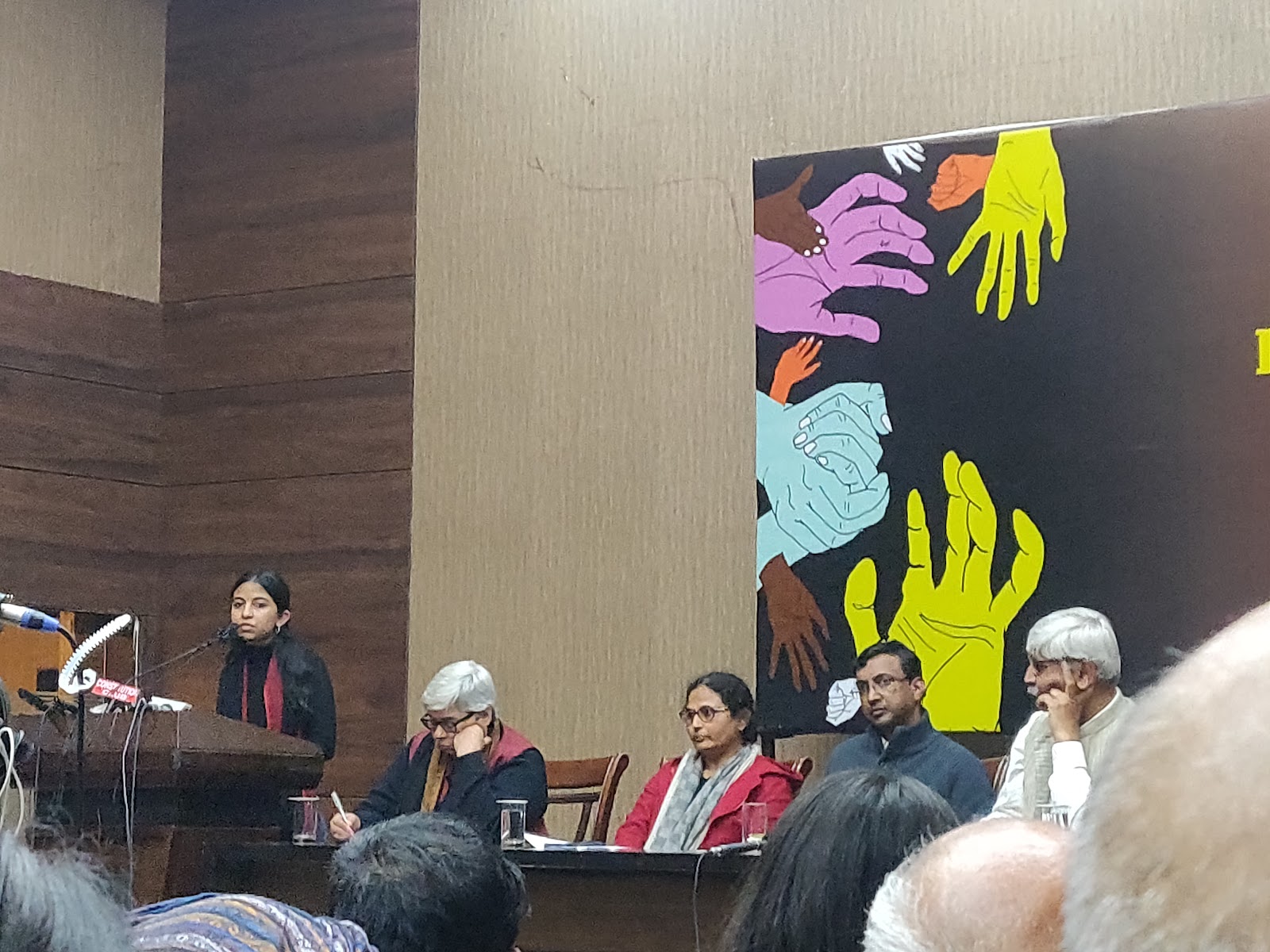