‘We've showed them our communal harmony will win us the fight’

NEW DELHI: The capital was witness to two major protests today in solidarity with the nationwide general strike: a march and public meeting at the Delhi University’s Faculty of Arts building, and a public gathering at the Jamia Millia Islamia university. 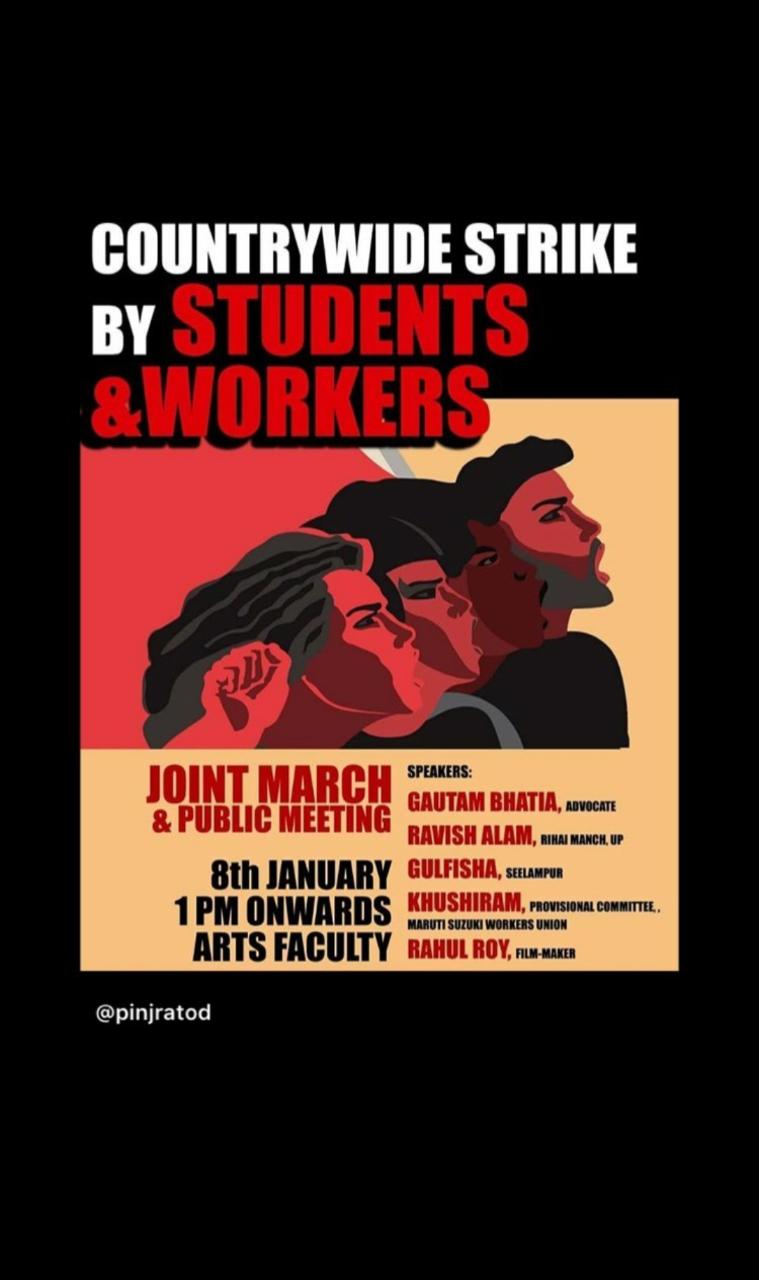 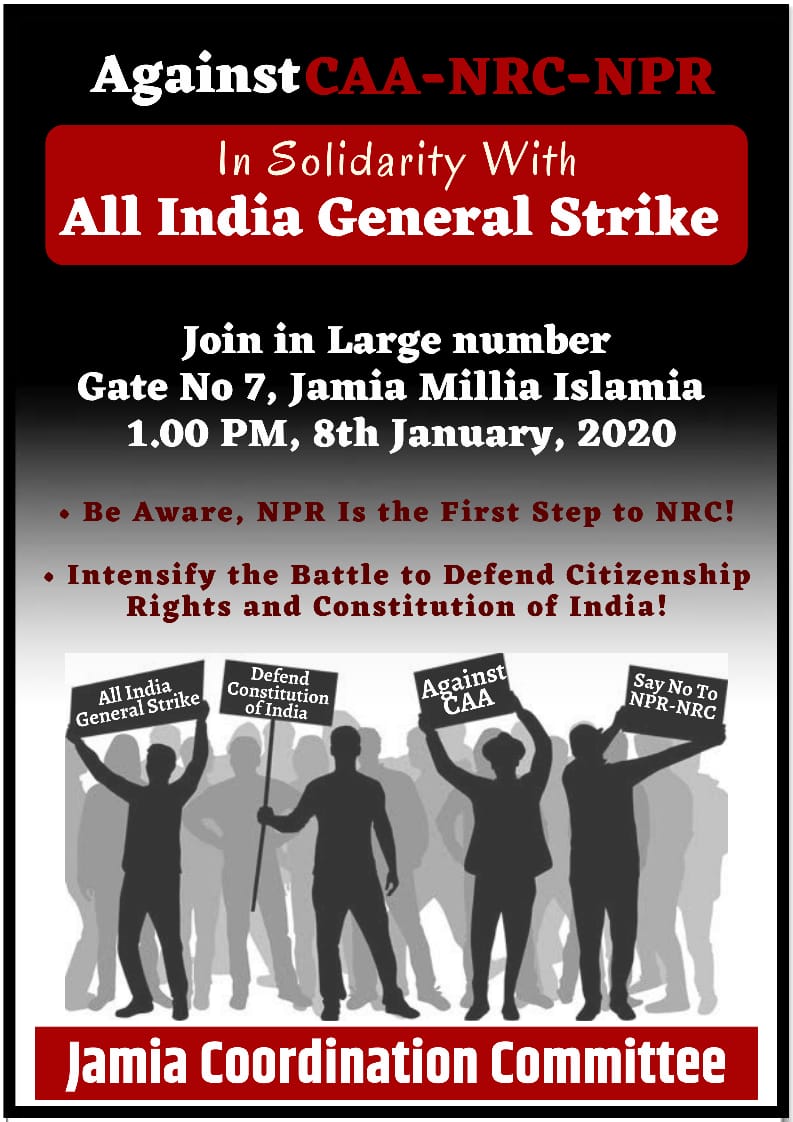 Outside the Arts Faculty in North Campus where the march was to begin, we saw barricades and a prominent police presence. The Delhi Police personnel were wearing their name tags this time. 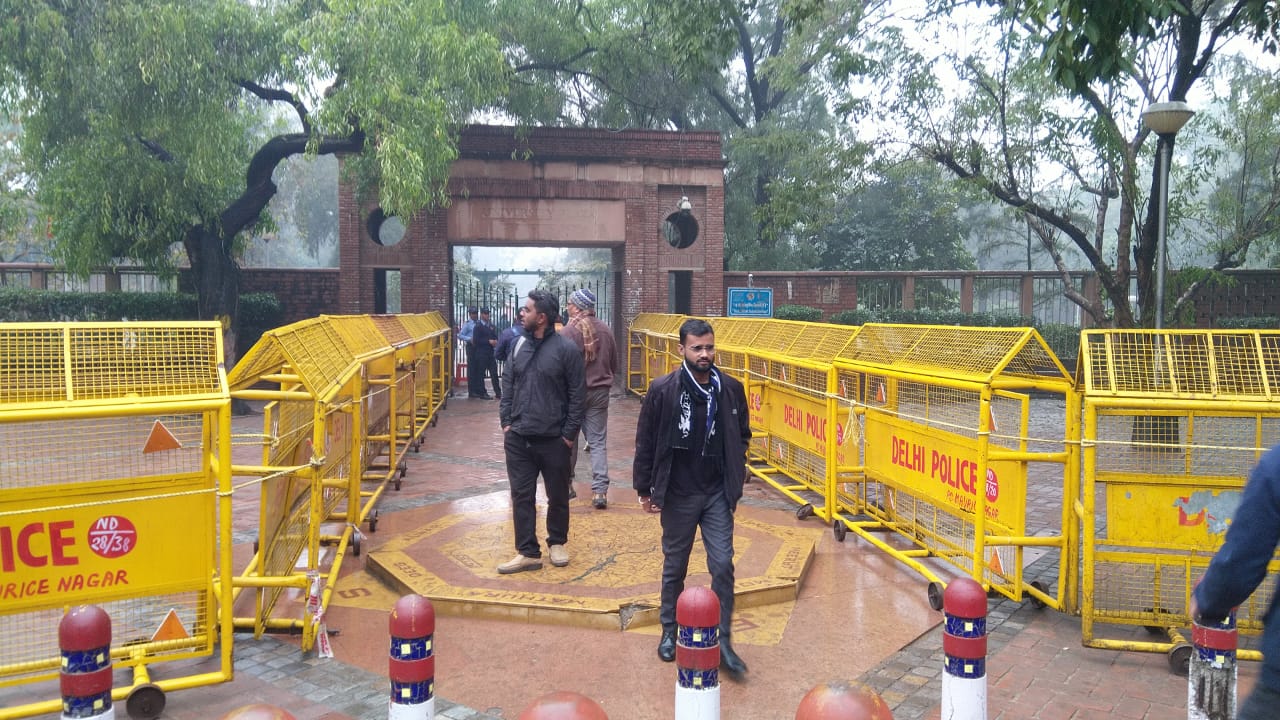 Shreya, state secretary of the All India Democratic Students Organisation, said “It's very clear that they’re trying to use communal riots as a technique to distract us from the real issues that matter to us. Farmers are still committing suicide, women are increasingly unsafe, education is being privatised. But it’s clear that instead of communal riots, we've showed them that it’s our communal harmony that will win us the fight.” 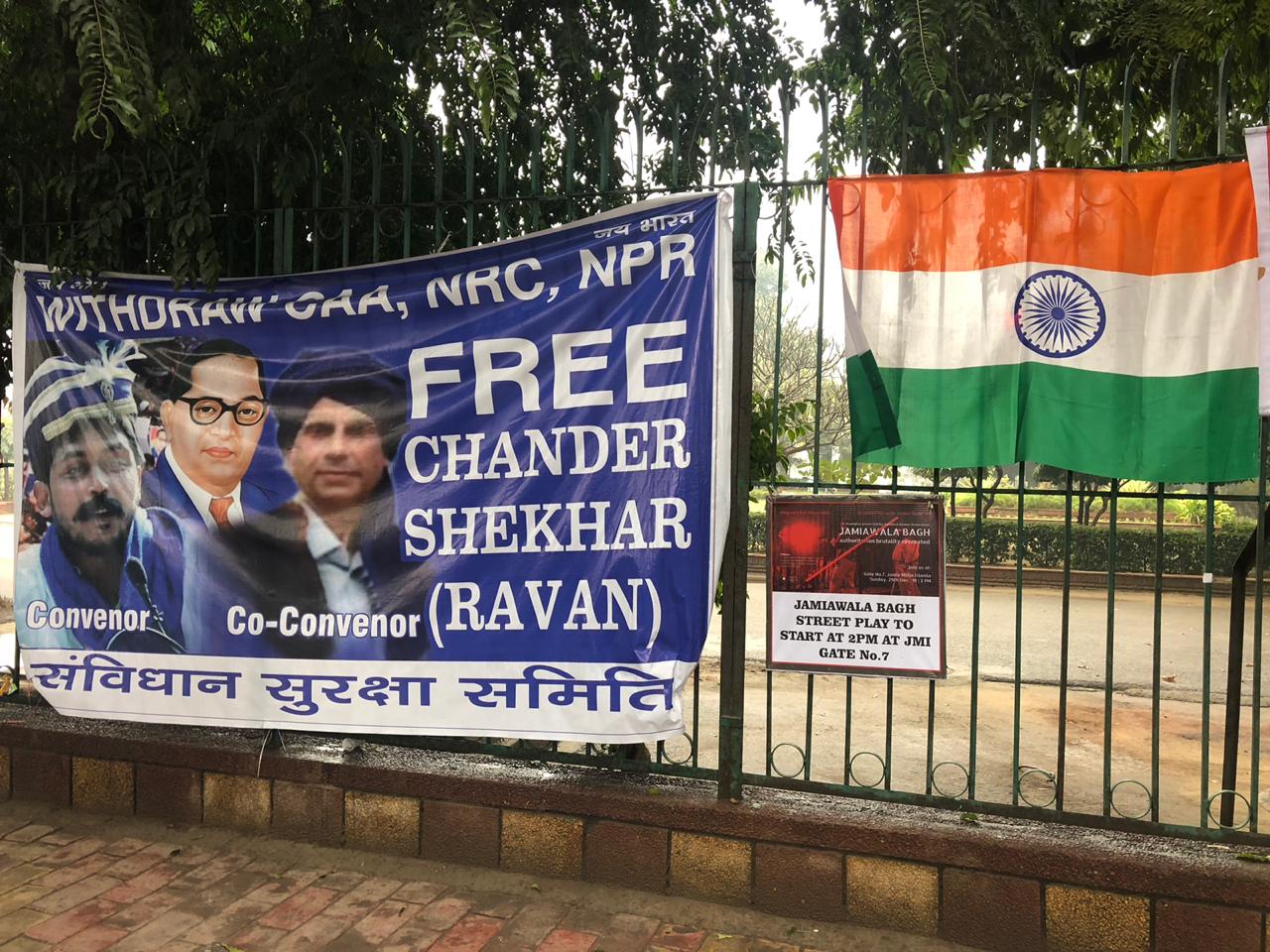 Vidhi, a first-year DU student said, “They lathi charged and beat up students - the goons and police alike. They’re not catching the real criminals and instead locking up students. Each one of us is here because we will not tolerate what is happening in this country now.” 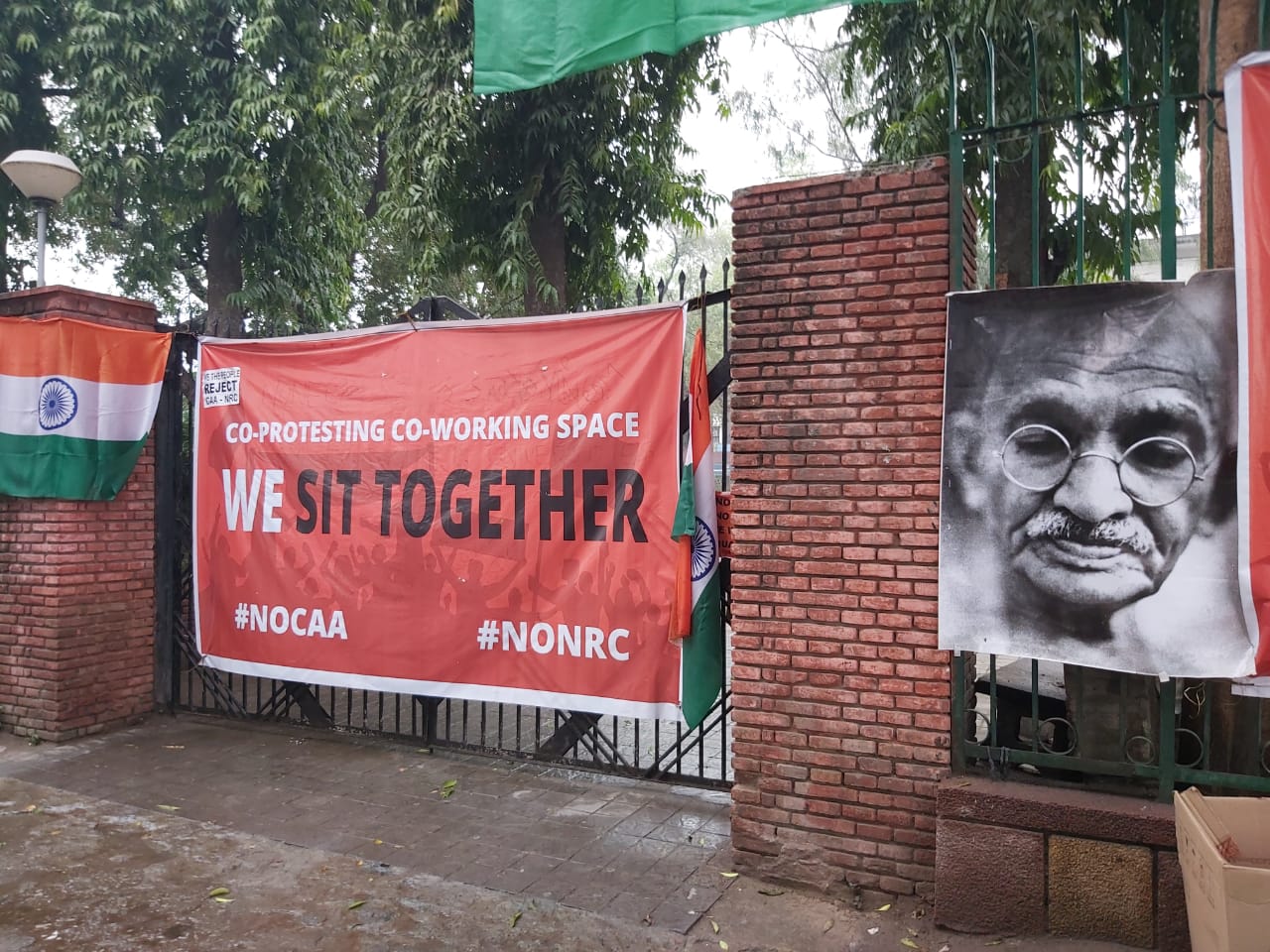 A pamphlet was being distributed at the site authored by the Krantikari Yuva Sangathan (Revolutionary Youth Association) reads in part:

“There is a small section of people in the country comprised of the rich and wealthy which robs and thrives on the toils of the masses. Those in power run their governments for the interests of this section. The Modi Government today has tremendously weakened labour laws to the benefit of Ambani, Adani and Tata…

“Today when poor people from Hindu, Muslim and all other communities are seeking answers from the Modi regime on the issues of education, health and employment, the government is trying to divert people’s attention by dividing them on communal lines of Hindu and Muslim.” 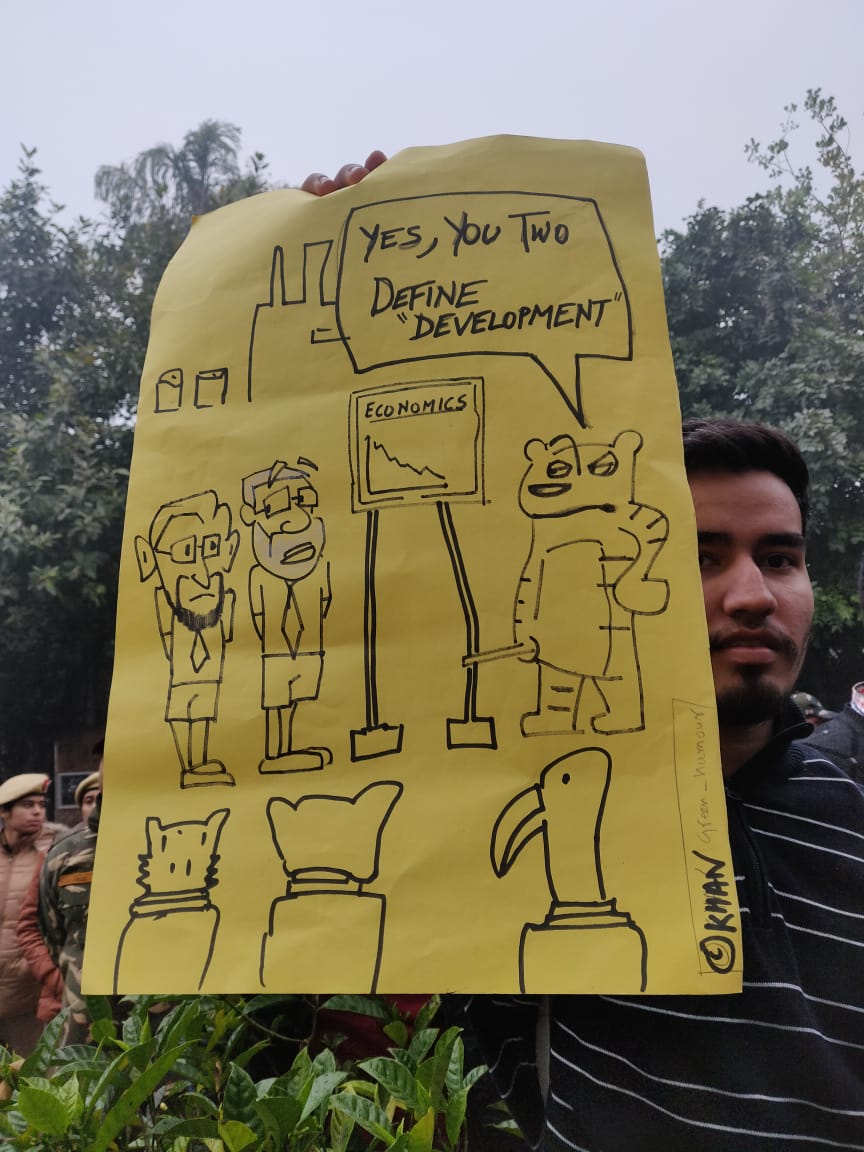 Presently the demonstrators tore up copies of a notice issued by the DU chief proctor which said that people need to take “permission” before organising protests.

A poster read, “All crowns will be tossed up, all thrones will be made to fall.” 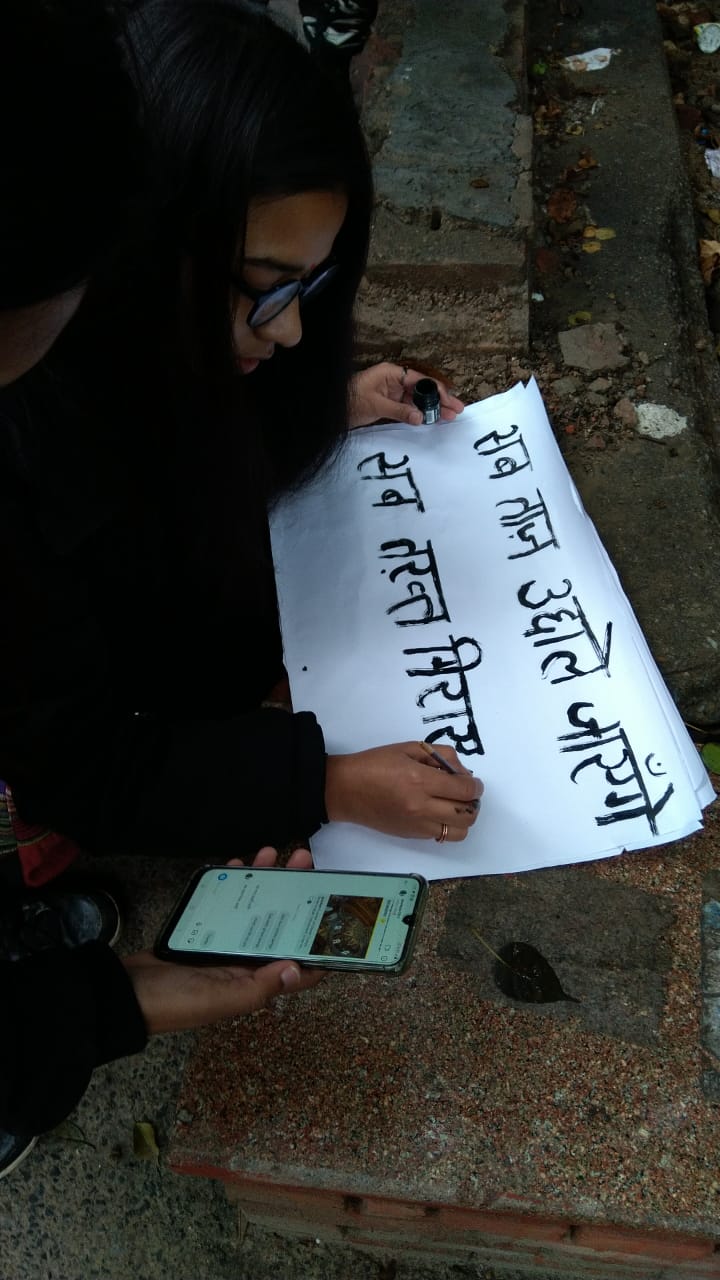 A literature student from DU said, “As a queer identifying individual I feel scared of the ABVP goons. They used tactics to intimidate us, to mock us. But as a student, it is my duty to agitate.”

Alex, a Ramjas College student who helped organise the protest, said “This is a collective response, not just against the CAA or NRC, but towards the anti-people policy of the government in general. I was present in the Rajya Sabha gallery the day the bill was getting discussed, and the [home] minister said on record that the CAA would be followed by a nationwide NRC. So I obviously don’t believe them now when they categorically deny it.” 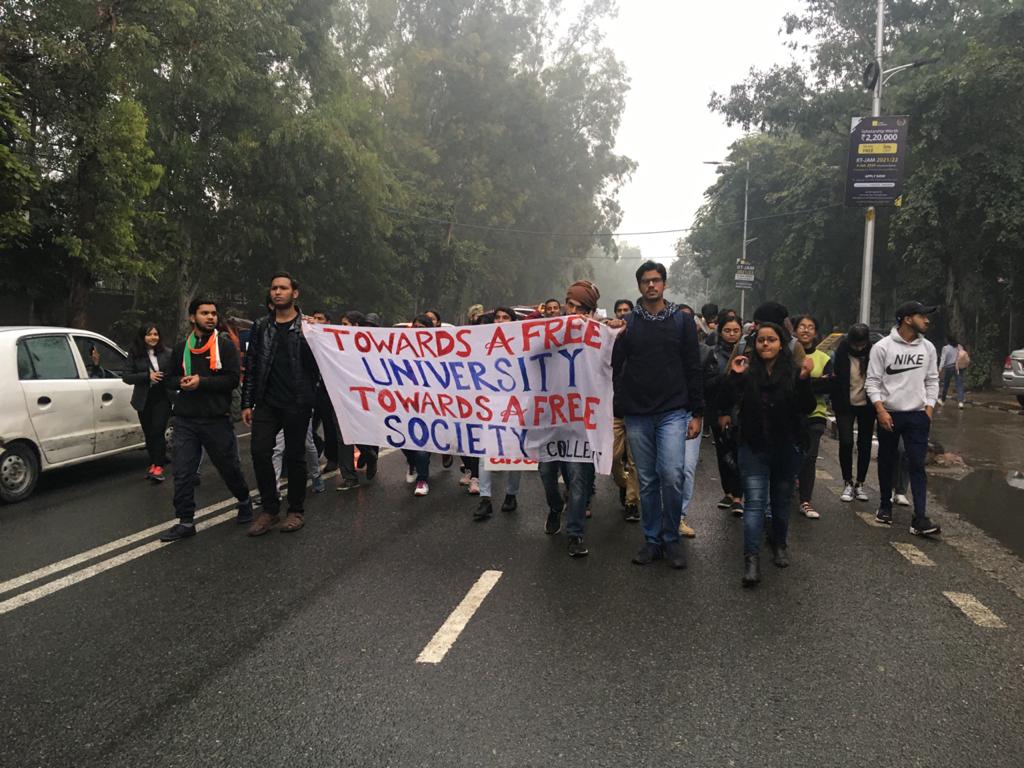 He went on to say about the government’s citizenship project that “I think there are problems more important than this that the country is facing today - women’s safety and education to name a few - but the government is hellbent on targeting one particular community.

“How many colleges from India are among the top 100 in the world? And the ones that are doing well like JNU are being targeted so brutally, by state sponsored violence.” 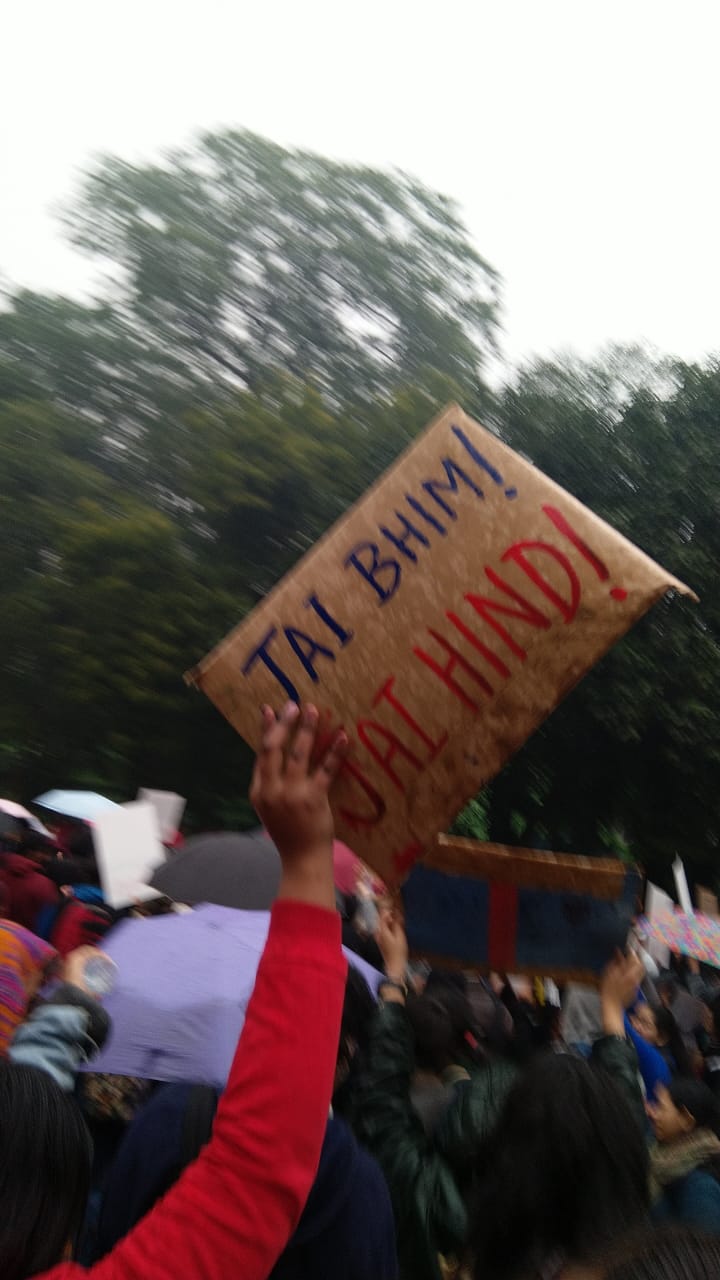 A protestor from the Faculty of Sciences said “It’s heartbreaking that you can just break into a premier institute in the capital of the country and beat up students. That’s why we’re here. Because we won’t stand for something like that.” 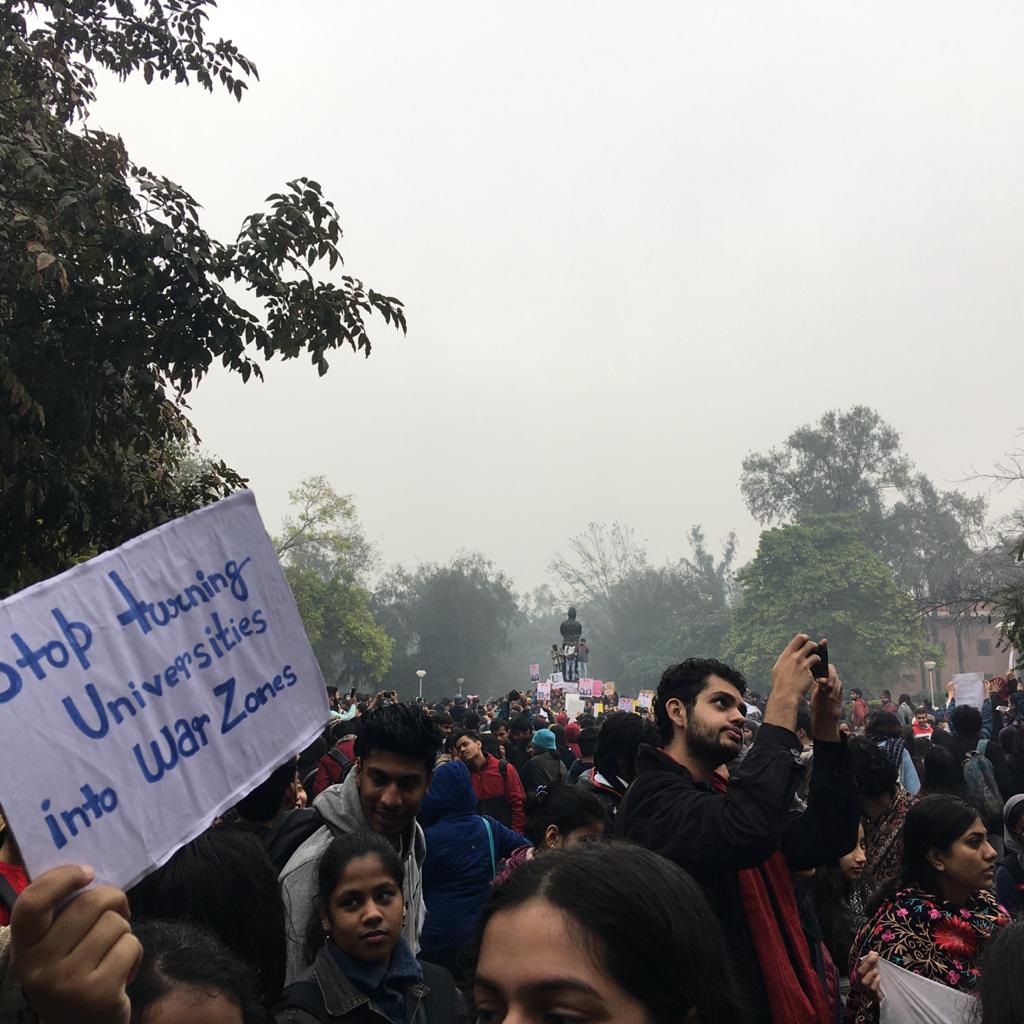 A teacher from Zakir Hussain College said, “We cannot just fight this battle on social media any more. We have to come out on the streets. As you can see the number of policemen here is more than the number of protestors. There was a call for a Bharat Bandh today and this is the most important platform we can use right now to fight the regime.” 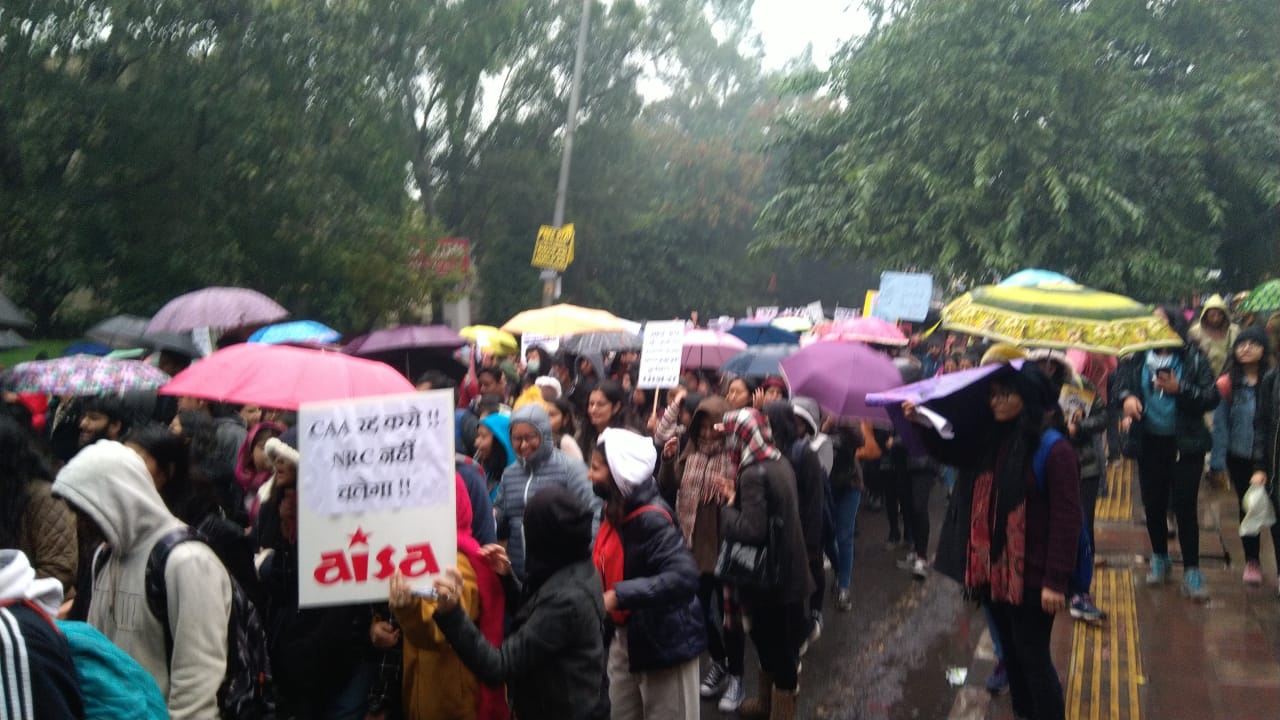 An MPhil English student said, “It’s also very important that we’re here in solidarity with workers. The idea that workers have to take permission to strike is itself ridiculous!”

The march began around 1.30, accompanied by police. 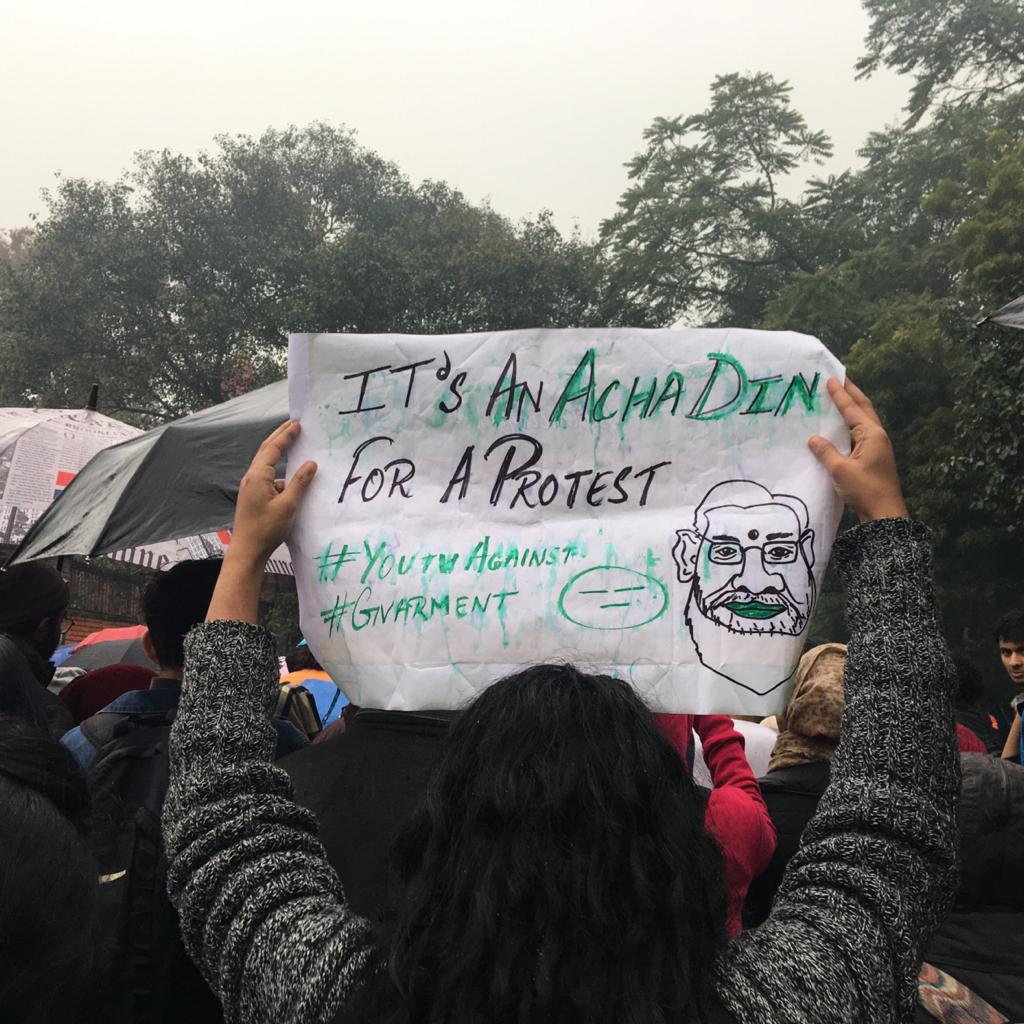 Slogans went up, of azadi or independence or freedom, of Halla Bol or Raise your Voice, and “Paper nahi dilayenge!” - We won’t submit our documents!

A poster read, “My government is mute, it has blood on its hands.” 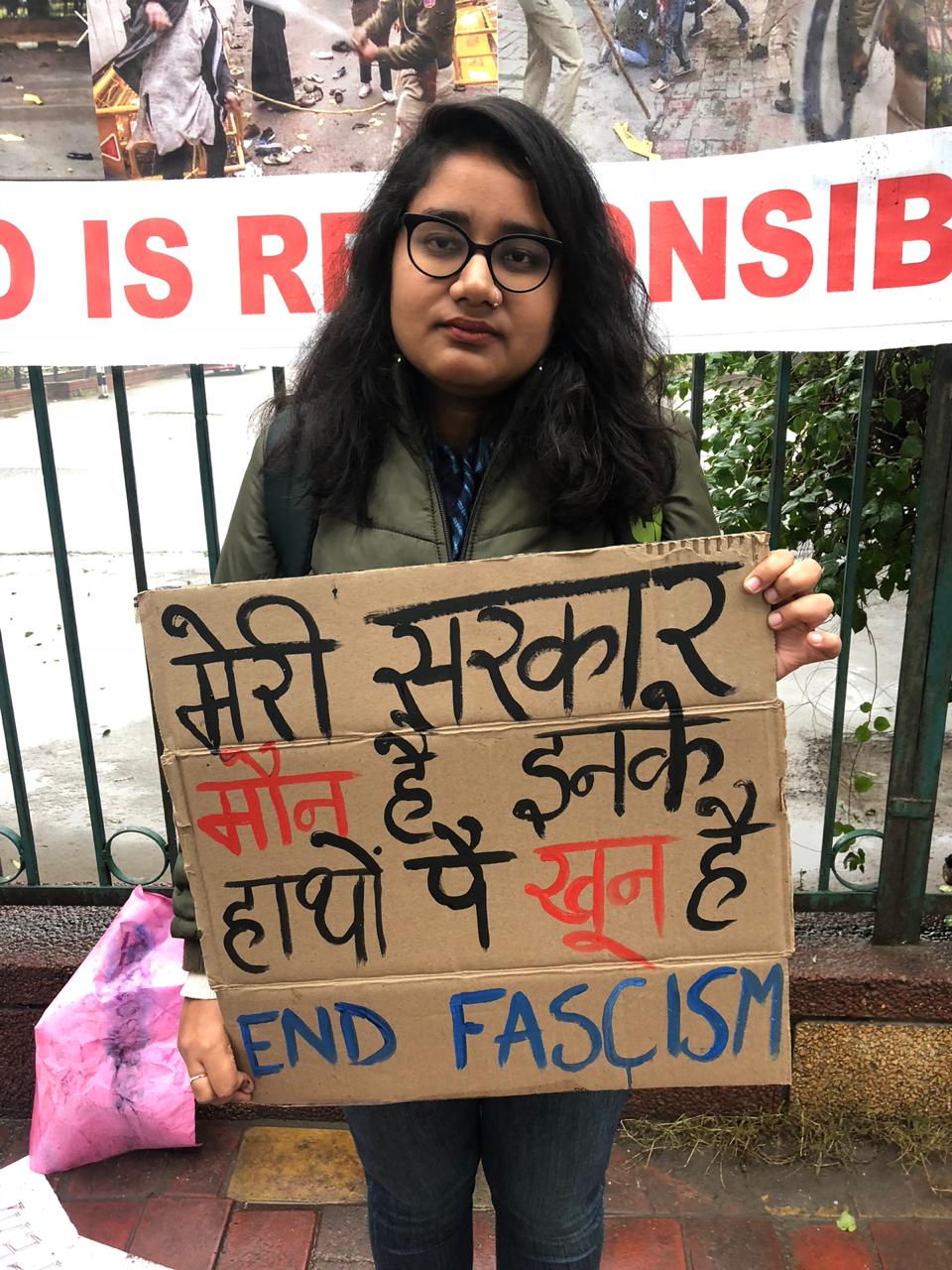 At the Jamia Millia Islamia, Swati, an assistant professor at Galgotias University who studied English literature here, told The Citizen that “On 15th December, something broke in me. I had been following the situation closely but that day it became personal. The political became all the more personal. 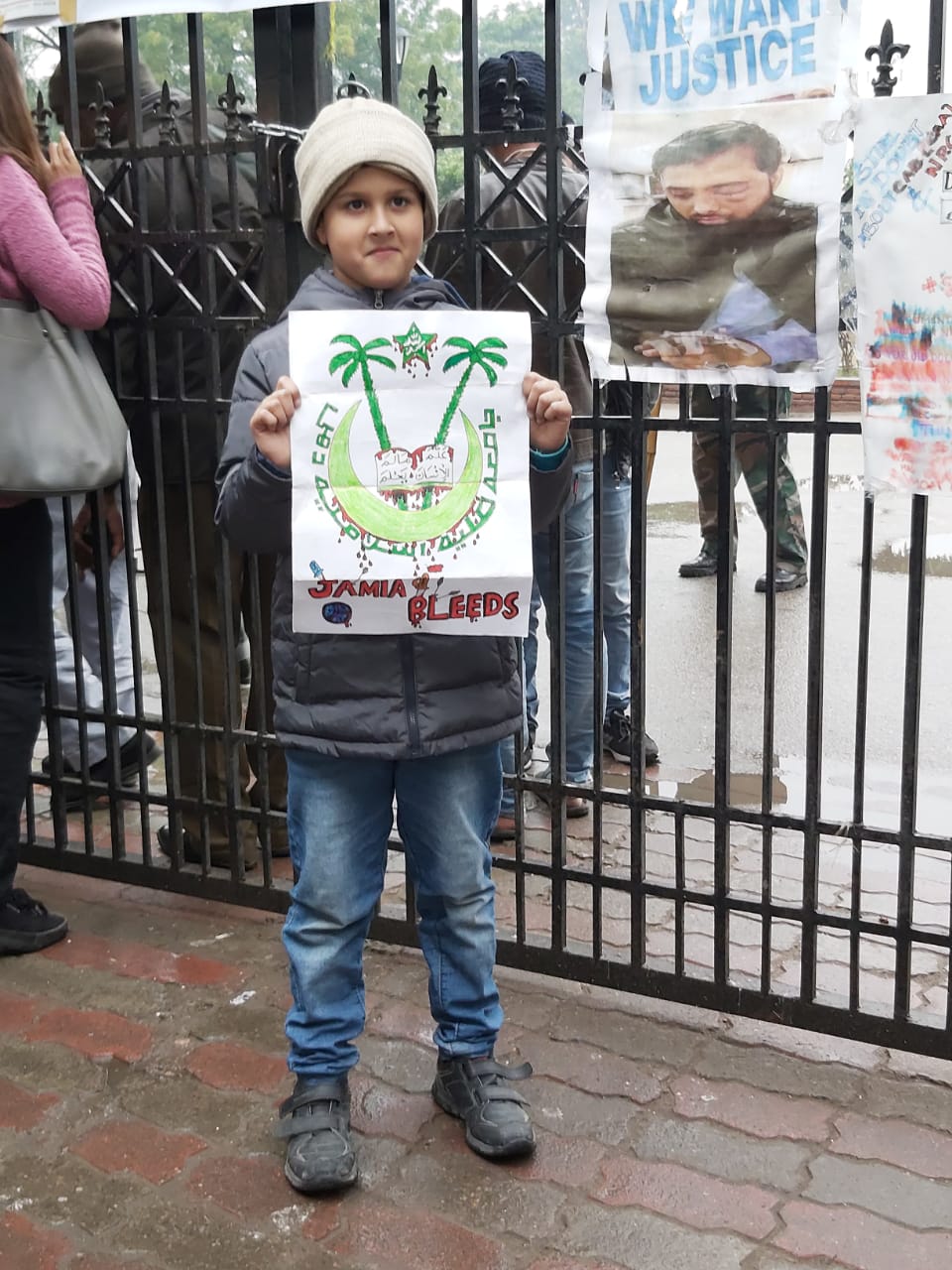 “That is why I’ve been here whenever I’ve had the time to protest, at Jamia, Jantar Mantar, Nizamuddin, India Gate. This is not going to die anytime soon and it shouldn’t die, even if on the 22nd it doesn’t go our way [when the Supreme Court hears petitions challenging the CAA]. 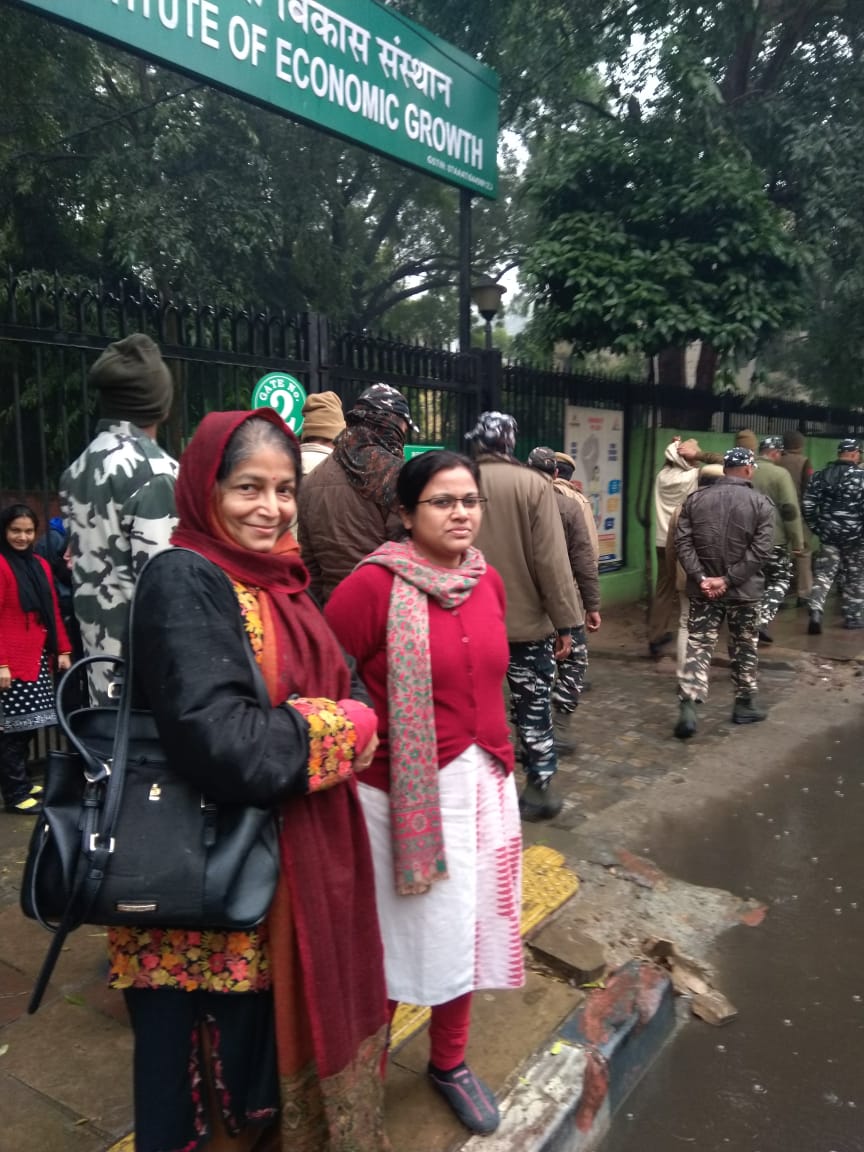 A DU student requesting anonymity said, “I’m here at Jamia because of the atrocities against students. They keep on unleashing violence against students in some form or other. And as an economics student, I think that at this point of time this [CAA-NRC-NPR] move by the government doesn't make any sense. The government should focus on problems like poverty, unemployment and so on but I don’t see that happening. 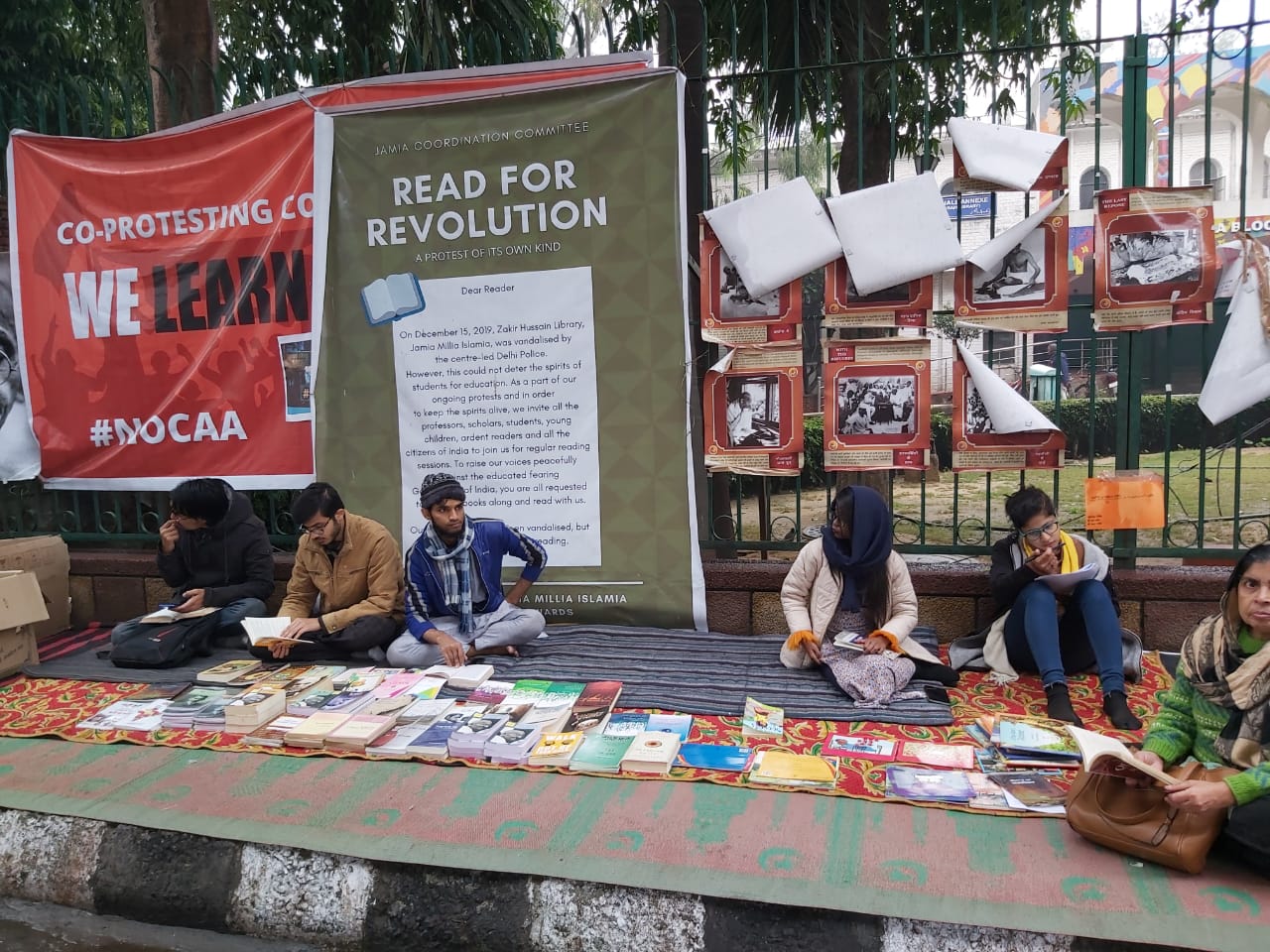 “How can you question the existence of the people of the country?” she asked. “I think it’s their motive of Hindu Rashtra [state]. I am a Hindu but I don’t think that by oppressing minorities I prove myself to be a true Hindu. I believe in equality and secularism.” 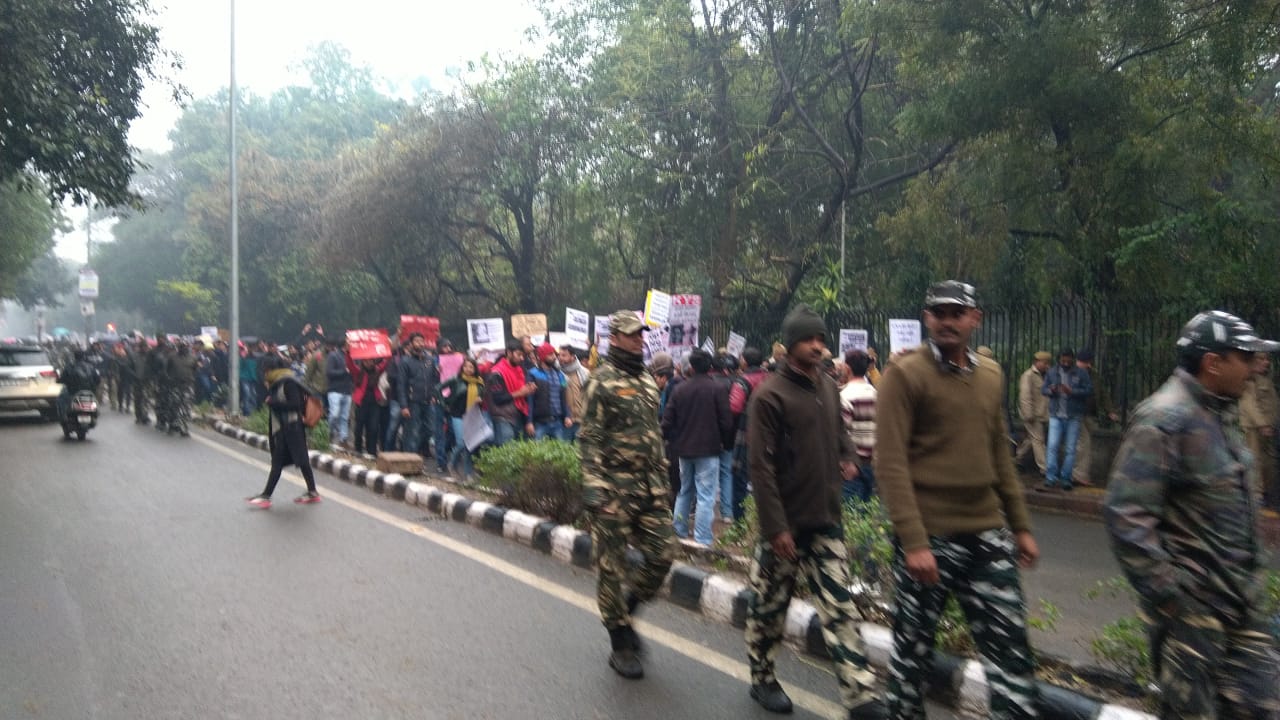 Aishwarya Raj, a student at Miranda House, described the recent protests as “a collective uprising against everything wrong with this government. And also against the ABVP [the student arm of the RSS]. Places like JNU are where I dream to study. It’s disheartening and scary to see students attacked there.” 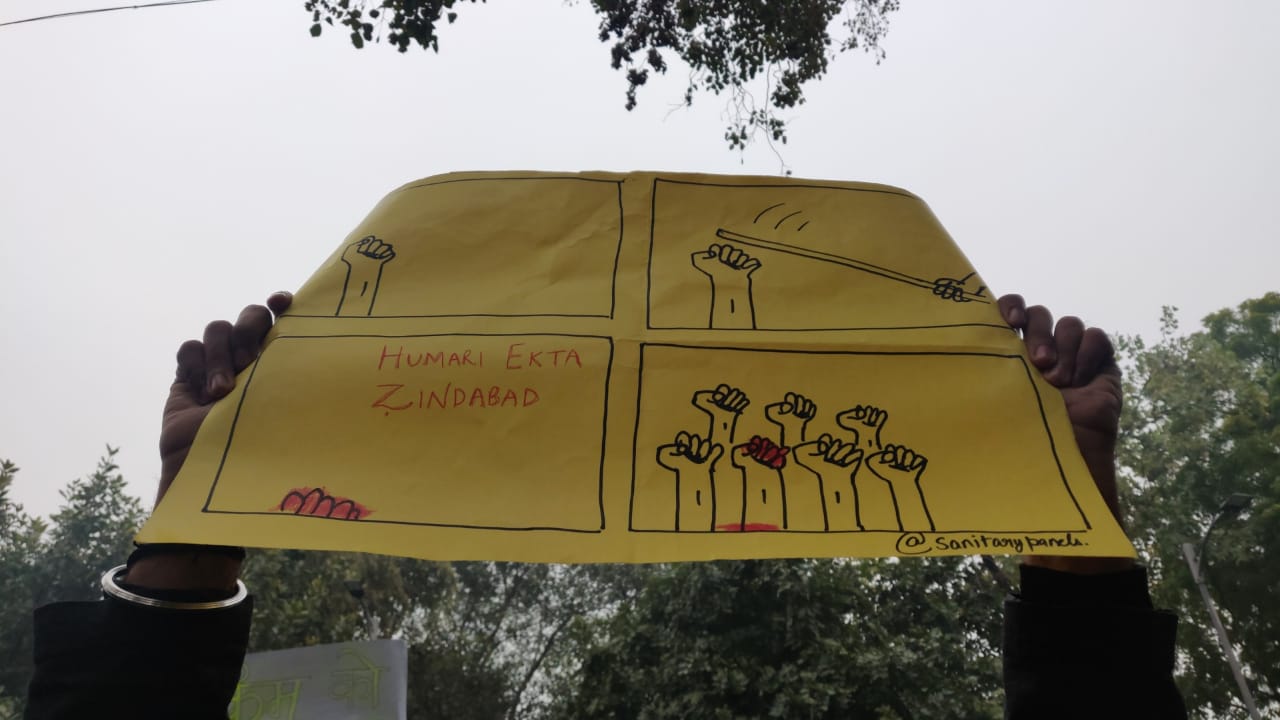 A student of Islamic studies at Jamia said, “They want to cause chaos and disrupt the peaceful environment of the protest. We protest peacefully but they send their police to create chaos. Then they send police and pressurise the students. But by God’s grace we have continued to protest peacefully and will continue to do so.” 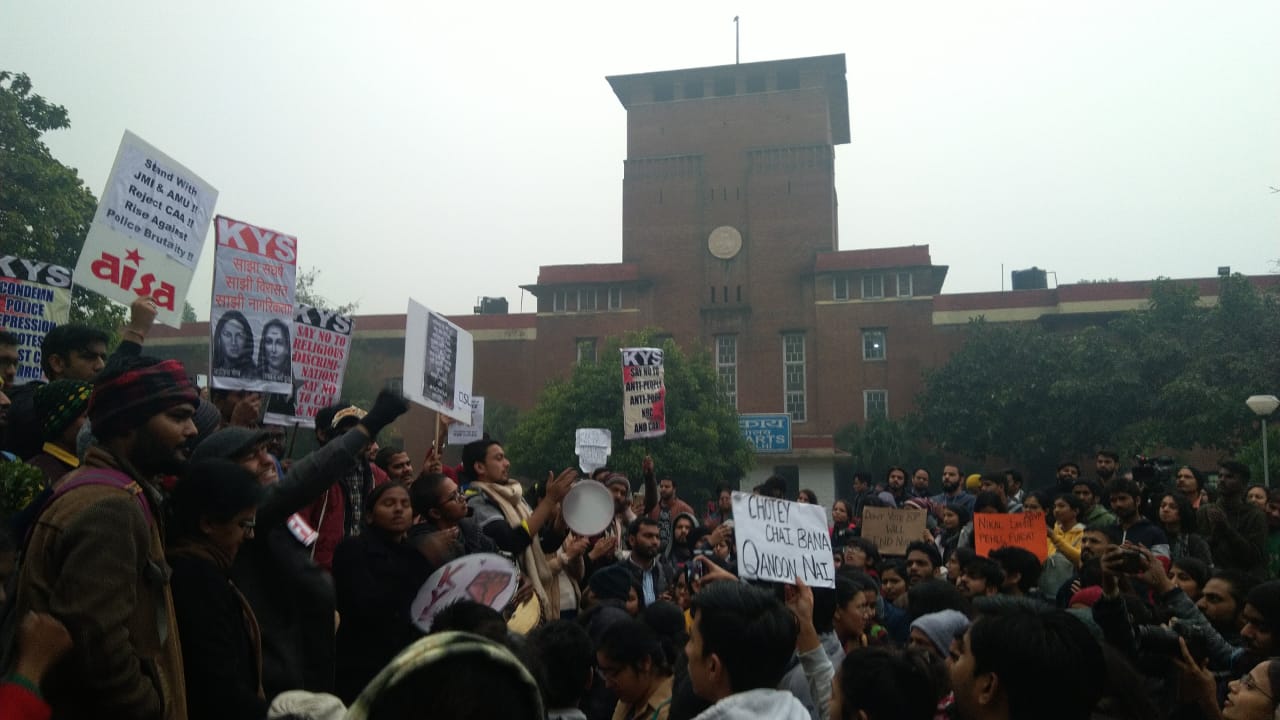 Chandni told The Citizen that “I'm not a Jamia or DU alum but I’m here because of the current scenario in my country. The CAA is the most appalling amendment I’ve ever known in my lifetime. Do they really think we’re that stupid?

“Nobody has the right to ask us about our documents just because they think it’s appropriate. And what is this amendment? They are actually insulting the Constitution. It’s a slap on all of our faces and I think everyone, especially all of the middle class who are busy arguing with their bosses, need to come out on the streets. 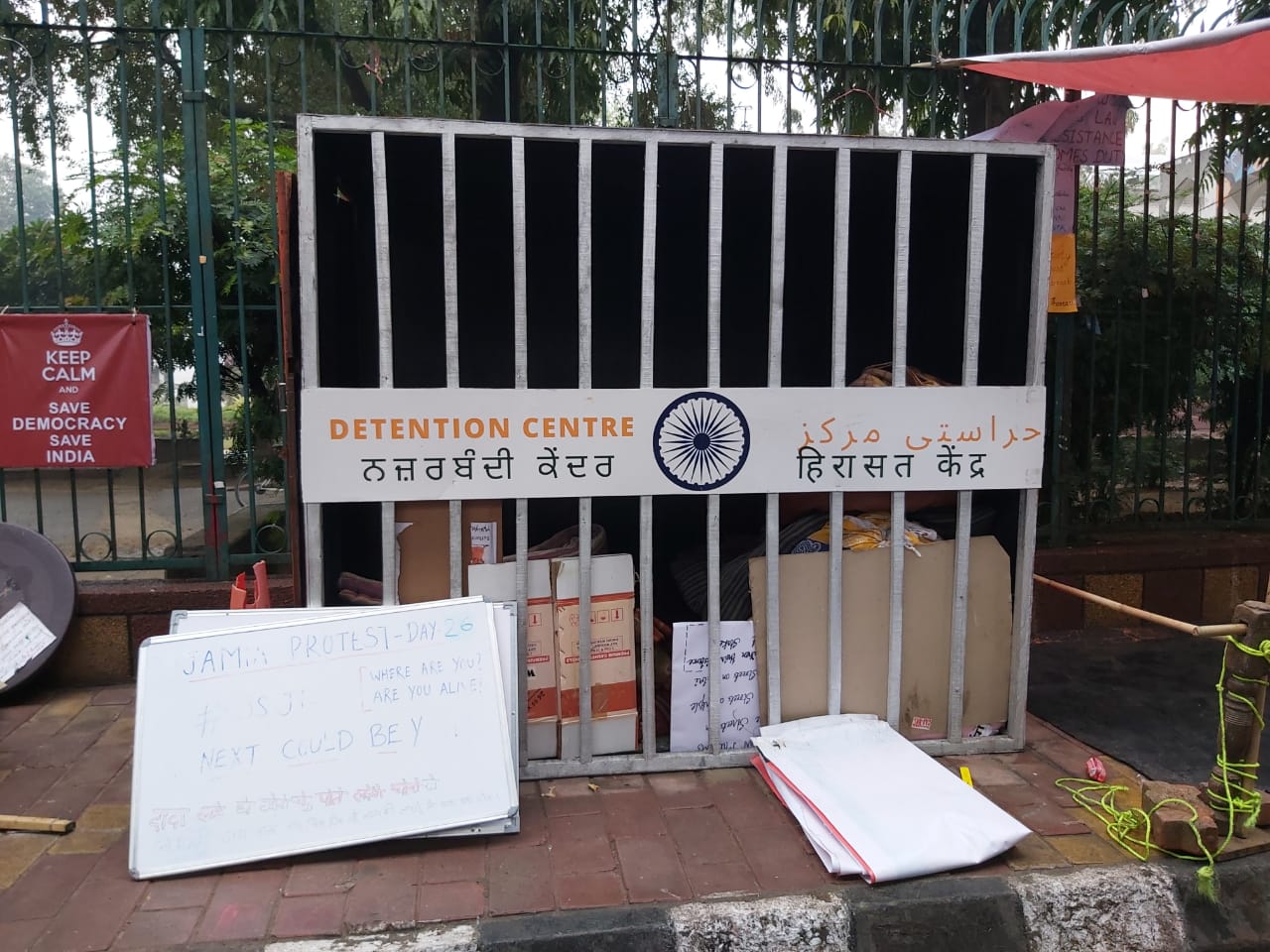 “We are so huge in number, if we come out nobody can stop us. It’s important that everybody comes out. Bring your sisters, brothers, parents, everyone!”

On the recently unmasked violence at JNU, Chandni said “It’s a shame. It’s a goddamn shame on our city and our police. They are supposed to protect civilians, not watch students get beaten up!” 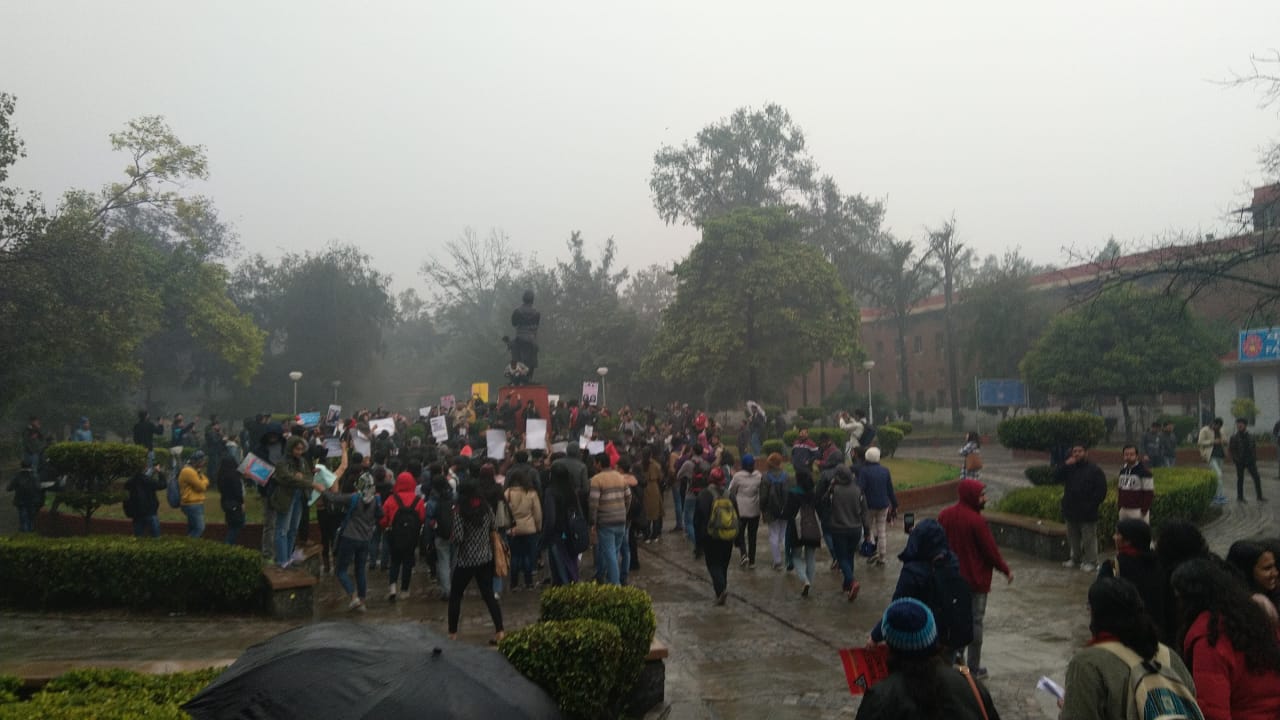 Some students and alumni were on a hunger strike. The university’s student, teacher, staff and alumni associations have condemned the new citizenship proposals, and the police brutality unleashed here a fortnight ago. Many have also called for the resignation of Home Minister Amit Shah under whom the Delhi Police operates.

Others present were chanting slogans, reciting poems and singing songs like “Mujhe dushman ke bacchon ko padhana hai…” or “I want to teach the enemy’s children…” 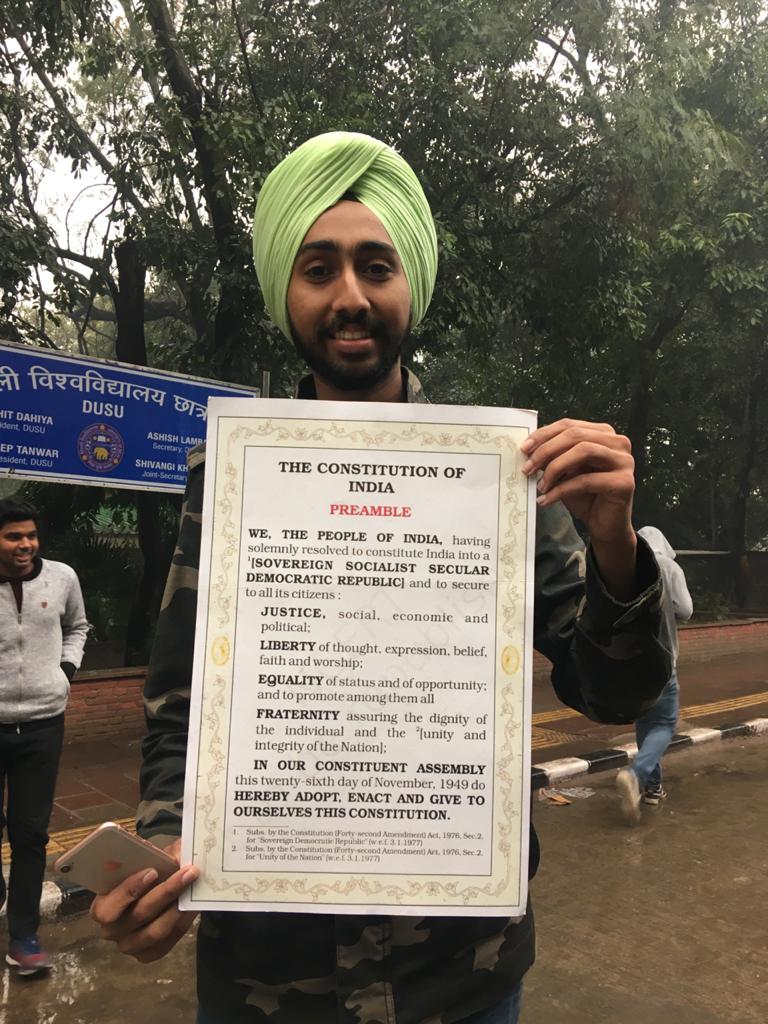 They called for volunteers from the crowd to come up and speak, sing or share a poem. Loudspeakers were playing Rang de Basanti and other patriotic songs.

Mohammed Azam, a student of political science, said “They tried to bring a bhagwa raj here [saffron rule]. We reject it and we’re here to clean it up.”

Meanwhile the marchers from DU pressed on despite the rain and fog. While the protest was mostly student led, a number of elderly faces could also be seen. 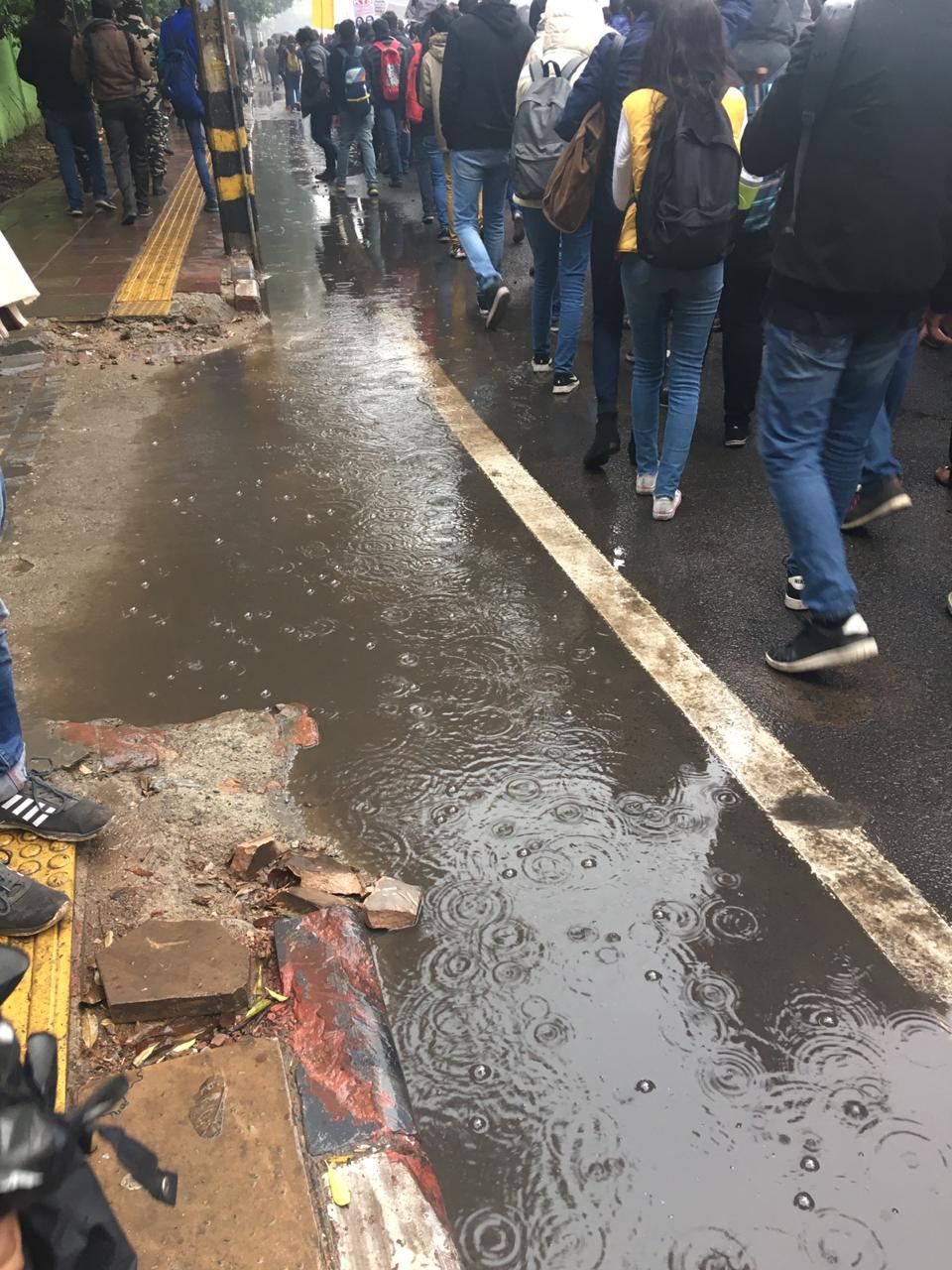 A poster read, “The end of the fucking democracy.”

At Kamala Nagar the marchers turned round to return all the way to the Arts Faculty. 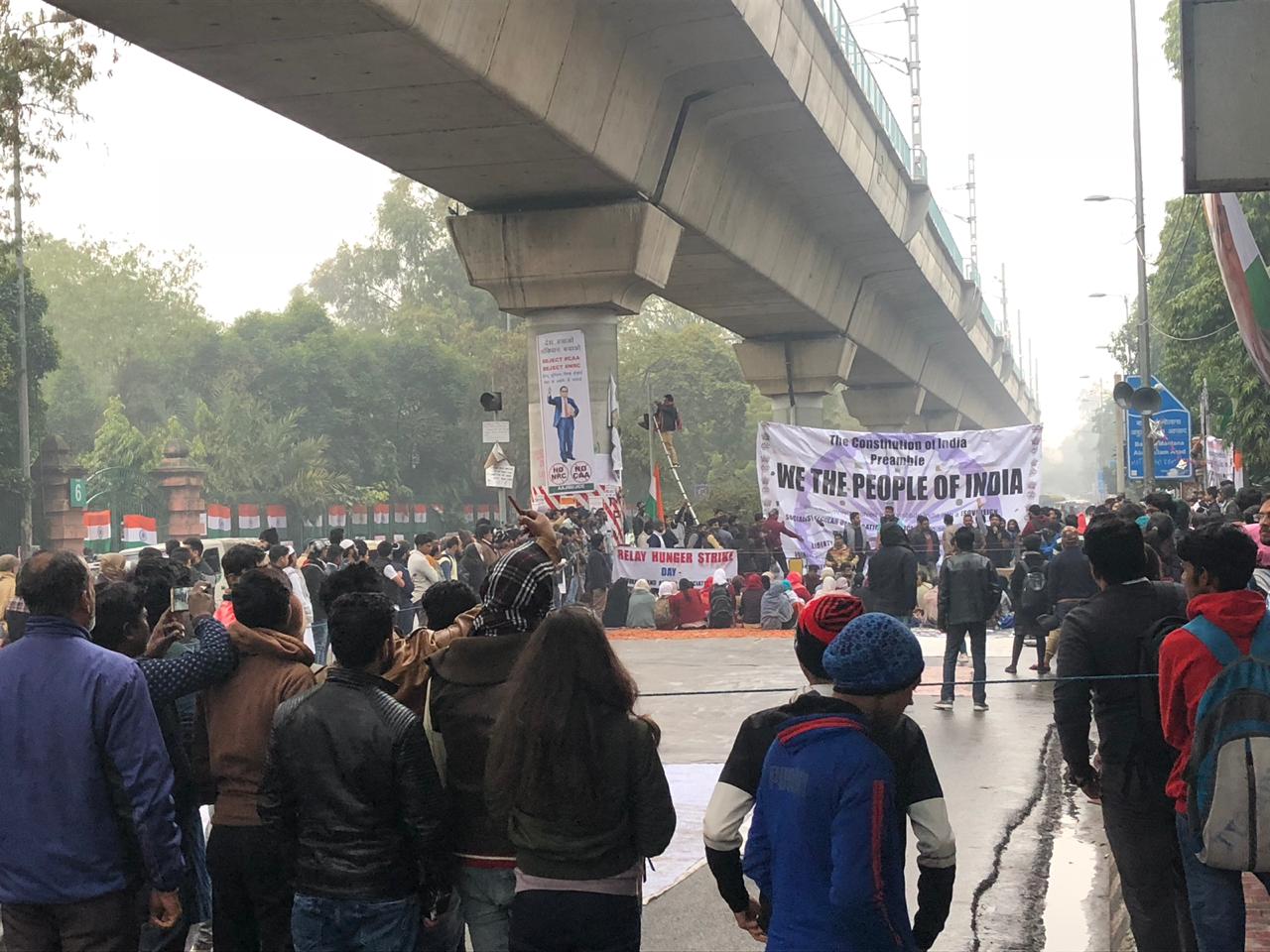 A DU student asked, “If you can’t even guarantee students’ physical safety inside their campus, then what can you do? No matter which political ideology you’re from, this is a basic human right you’re violating.”

Saurabh Sagar, a first-year law student, said “Not only am I here for the students, but also for the workers. I stand against the anti-labour laws the government has implemented, ‘combining’ 42 laws into just four.” 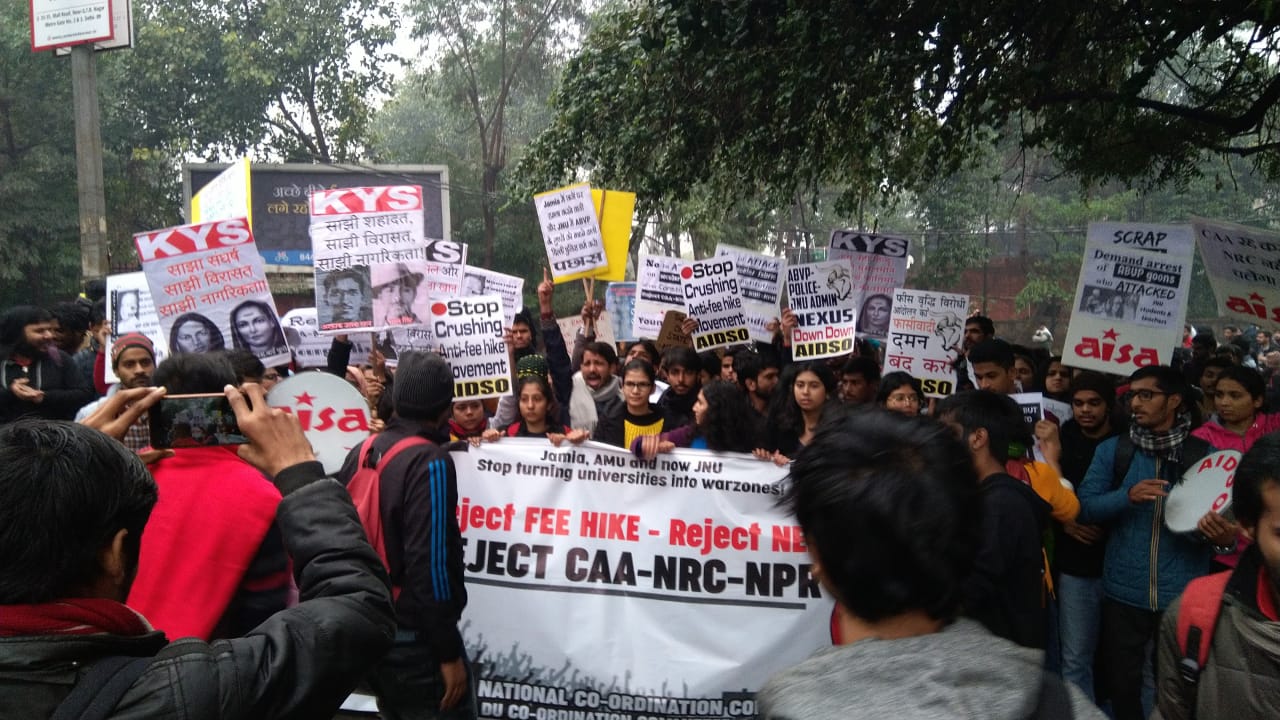 Himanshu, a second-year English student at Hindu College said, “They’re using violence in universities so that they can then say that universities are violent places and unsafe for students, so they can ultimately close down students’ unions and associations. This is exactly how they closed down the Kashmir Students’ Union.”

Yesterday the students of St Stephens College boycotted classes and gathered on their campus in protest against the violence at JNU and other universities. They sang slogans and read from the preamble to the Constitution. 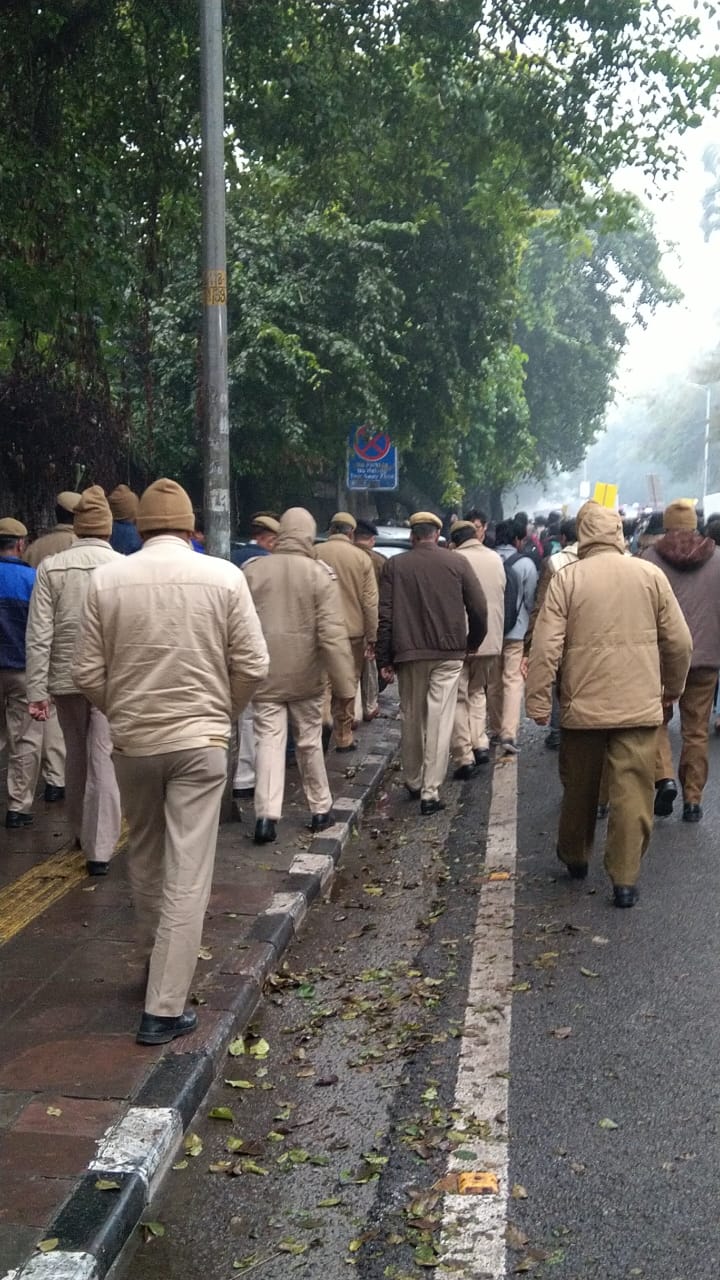 Back now at the Arts Faculty building, several groups were chanting slogans and waiting for people to arrive who were to address the demonstration.

One of the speakers, scholar and advocate Gautam Bhatia, told The Citizen that the Citizenship Amendment Act “is problematic as it’s the first time religion has been used by the government to categorise citizens in this manner. And then there’s the entire constitutional debate that is going on at this moment. There are many things.”

A poster read, “We’ll go back to class after teaching you what democracy means.” 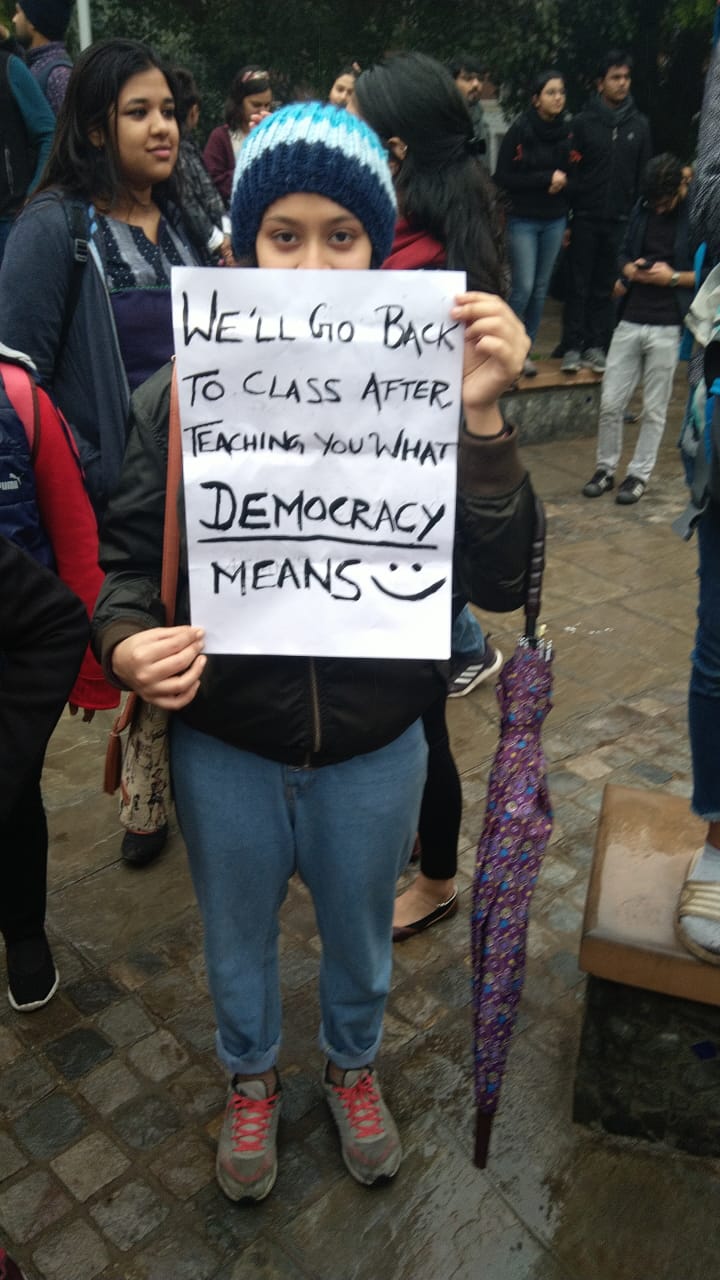