When B…s... Is Made to Sound Pristine

A recent post by Indian stand-up comedian, Atul Khatri prompted me to write this. 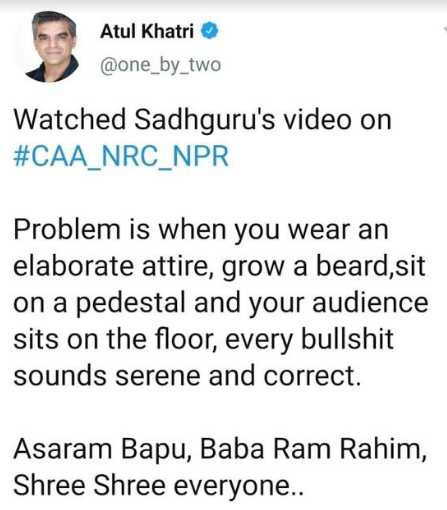 Democracy and secularism in India often seems to be overtaken by our merry band of babas, yogis, yoginis, self-styled god men/women, mystics and saints. Regrettably they have the status because of the power accorded to them by our politicians who use them as baits to catch votes.

It never really quite works that way because the god men/women are only thinking about the power they wield on the frenzied crowds they attract, their fat bank balances and how to fleece the followers that flock to them in search of god knows what. From Bhindranwale to Ramdev to Nithyananda to Asaram to Ram Rahim to Radhe Maa, the list is endless.

Our politicians persist in this approach and cover their backs through propaganda. Winning elections by playing the god man card seems perfectly acceptable to them because they see their voters as dumb and driven by religion. It eventually, therefore, distils down to politics. Babas catering to gullible folks would hardly be a social nuisance if politicians did not meddle in this. Most societies are religious and yet, if they are democracies, it is important that they keep faith in its place. Secularism truly means keeping religion out of politics. Likewise, democracy truly means keeping politics out of religion. Distort either one and you muck up the other.

Revelations about the ‘divine preoccupations’ of god men in the sacred precincts of their ashrams have been appalling, not because they were bereft of such qualities in the past but that the incidents of sex, murder and mayhem, which were reportedly enacted in their ashrams, are shocking and astounding. That the god men were able to pursue their interests for years without attracting the attention of the state is perhaps not surprising, given the nexus between political power and religious establishments, but it is disgraceful.

The unflinching faith of the followers in the divinity of god men is persistently built over time. Under coercion or consent, the devotees appear to submit to the extortion or exploitation of god men. Due to this, we project a social situation reeking of medievalism, caste discrimination, religious dogmatism, gender inequality and superstitions. A large segment of the population succumbed to the temptations of an unreal world which god men proffered. They were led to a make-believe world of liberation where all social inhibitions could be shed, and peace and salvation promised, through the medium of the ‘holy’ rather unholy lot. The mindless support they elicit from their unsuspecting followers is used to garner social, political and economic power.

In recent times, the increasing numbers of god men (and women) have been spotted in state governments, corporate board meetings, educational institutions etc. They are not spiritual men but ambitious con artists who purvey deception, falsehood and religiosity in the name of god. You would be surprised to know that the substantial following that god men command is not from the illiterate masses, but from the well-educated middle class that tends to celebrate the irrational in the name of culture. The frauds are here to stay, until social consciousness undergoes a qualitative change.

The real problem lies with the self-proclaimed god men who are basically ordinary men and are quite clever and good orators who know how to influence the masses. Superstitious beliefs have been prevalent in India since centuries and they take full advantages of this. People in search of peace and spirituality eventually fall into the trap. The situation becomes more vulnerable when the politicians get involved with these self-proclaimed god men. This makes the fraud babas stronger and powerful.

The increasing number of so-called ‘spiritual’ wannabes in India needs to be brought down. The fact that they are able to thrive shows that we as a nation have failed to develop economically, that there exists caste inequality and social injustice to the underclasses.

It shows that official institutions of governance will all too readily delegate their responsibilities, enabling those who run religious orders to live above the law. It shows the fragility of law enforcement, which fails ever so often in the face of mass fury.

India may have seen some gurus in the guise of reformers but the unquestioned authority of the guru was always a recipe for the creation of disaster. This is witnessed even today when questioning spiritual leaders is often not permitted. The need is to ensure that religious teachings are interpreted in a better and more holistic manner.

For India, reducing inequality is a long-drawn process, but state policies and the redistribution of wealth are the key ingredients in tackling inequality. Our population explosion is holding back our real development. The growth of population has a direct effect on the living standards of people. This is why, despite our spectacular progress in the agricultural and industrial spheres since independence, our per capita income has not risen appreciably.

The appalling overcrowding of our cities (which like cancerous growths are mushrooming unchecked with slums proliferating) has brought about a virtual breakdown of transportation, electricity and other services. It has also led to the rise of crime and an increase in violence in the urban and the semi-urban areas. All this has been directly fuelled by the addition of about 17 million people every year or an annual population growth rate of 2.14.

If the population continues to increase at this rate, in a few years from now, we will have an army of unemployed, hungry and desperate people who will threaten the very foundations of the social, economic and political systems and institutions of the country. Population explosion, militancy and separatism have gathered momentum. At this point, political maturity is a must – but there lies a huge gap there, that is widening by the day.