'No Stay' on CAA Rules SC, 'Disappointing But Struggle Will Continue' Say Activists

'We will continue until CAA is repealed'

NEW DELHI: The Supreme Court refused today to grant an interim stay on the Citizenship Amendment Act, giving the Centre four weeks to respond to all petitions filed.

Some pleas further sought a judicial stay on the implementation of the CAA, NRC and NPR.

CJI Bobde reportedly hinted at placing the matter before a Constitution Bench. The SC also restricted High Courts from passing any orders on CAA while the hearing is on in the Supreme Court.

Further, matters concerning Assam and Tripura are to be clubbed together and dealt with separately. The bench asked senior advocate Kapil Sibal to help identify these matters, and has court has given the Centre two weeks to respond to cases regarding Assam.

The court reportedly also mentioned that matters concerning Uttar Pradesh can be heard separately as the state is moving to implement CAA without framing any rules.

During the hearing, senior advocates Abhishek Manu Singhvi and Kapil Sibal, appearing for the petitioners, requested the bench to stay the execution of CAA and postpone the implementation of NPR which is due to begin in April.

Sibal reportedly told the bench that many states have already begun with the documentation process for NPR, and since “citizenship once granted can’t be reversed” requested the court to postpone the NPR process for three months.

Attorney General Kottayan Katankot Venugopal stated that the Centre had received copies of only 60 out of the total 143 petitions filed. He requested six weeks’ time to respond to all pleas. Sibal and others opposed the request. The bench then refused to pass any order staying the implementation of the CAA and NPR, and gave the Centre four weeks to reply to all CAA matters other than those related to Assam.

Meanwhile, in response to the SC verdict, Shaheen Bagh protesters have stated that their protests will continue. 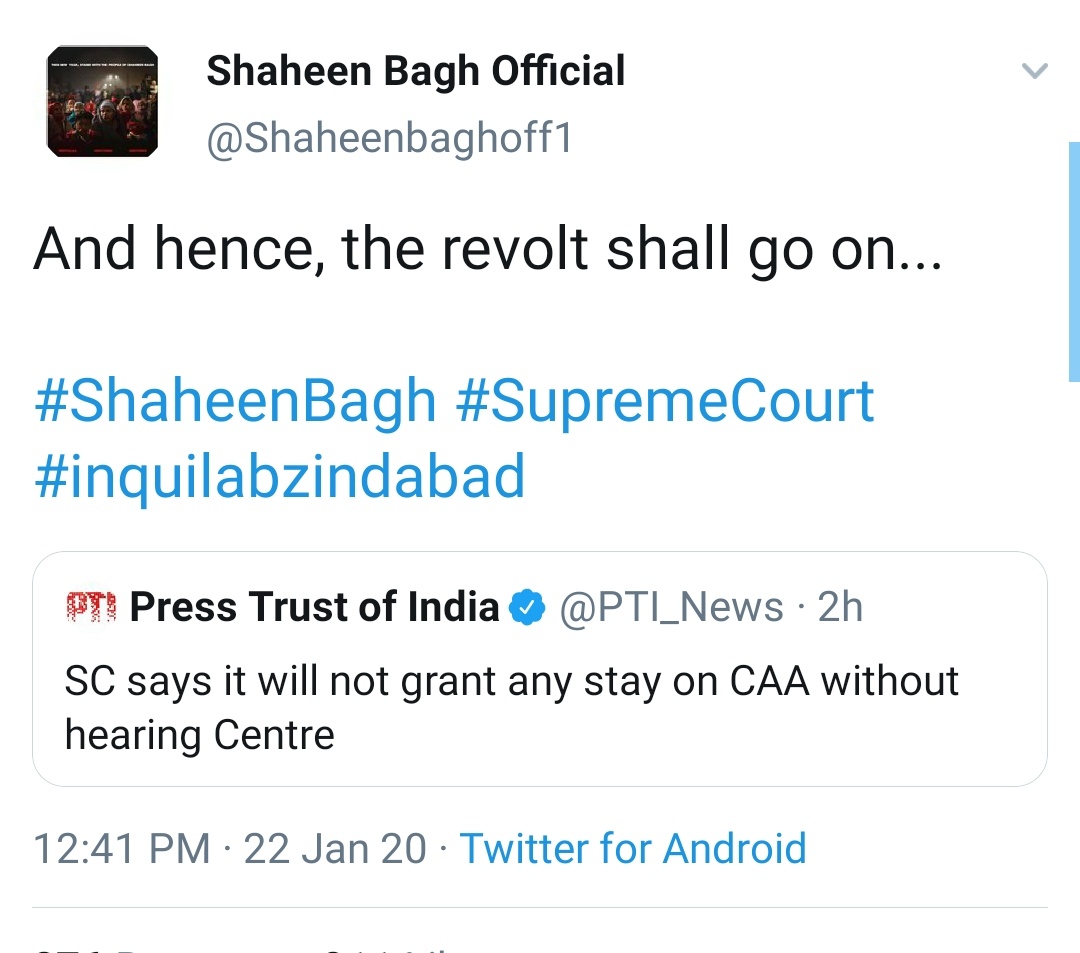 Brinda Karat of the CPI-M told The Citizen, “The struggle will continue. It’s disappointing that the Supreme Court has not understood the urgency and given four weeks to the Central government. The SC should have been more sensitive to the urgency of the issue.”

Filmmaker Saba Dewan stated that while the delay in the hearing was “disappointing”, “the struggle will not stop.” “Of course, all of us were hoping that the hearings would be today. But in all its wisdom if the Supreme Court has postponed it by a month then we just have to hope that the hearing begins in a month’s time,” she told The Citizen.

On state governments’ role in taking forward people’s struggle against the CAA, Karat said the states should follow Kerala in blocking the NPR.

“Operationalisation of CAA is through the NPR, which the Kerala state government has said it is not going to do it. So the way to take the struggle forward is for all state governments who are against the NRC, similar to Kerala, they should say that they are not going to implement the NPR exercise. If that is not done, it will de-operationalise the CAA,” Karat told The Citizen.

While many state governments have come out in opposition to the CAA, Kerala’s has filed suit against the Union Government stating that the CAA violates Articles 14, 21 and 24 of the Indian Constitution.

The suit was filed under Article 131 which allows the Supreme Court to decide on disputes between state and central government. The Kerala government has also refused to implement the NPR process.

IUML general secretary P.K.Kunhalikutty stated that the court hearing was positive, as reported by The Indian Express. "This is a very serious matter. Once citizenship is given, it cannot be taken back. Kapil Sibal had strongly argued that since the matter involves a lot of legalities, it must not be implemented now and must be postponed. The government has asked for time to respond and the SC has given four weeks' time. Kapil Sibal also asked for the matter to be referred to a larger constitution bench. People who listened to the hearing felt the court was positive to the request. The IUML had also pleaded that there are contradictory statements being made (on CAA-NRC) inside and outside Parliament. So the court has issued a notice in this regard."

The Indian Express also reported Ramesh Chennithala, Leader of Opposition in the Kerala Assembly as saying, "The attitude of the court has been very positive in this regard. There are 144 petitions. The government asked for six weeks to file a counter-affidavit but the SC gave four weeks. There will be a decision after it. The court has taken a very serious view of it. There have been earlier instances when the court has swatted aside petitions against laws enacted by Parliament. But here, a final decision will come only after four weeks. This is a larger constitutional matter, that's how this is shaping out to be. There's certainly an impression that the people who have concerns regarding the law will not be disappointed. We felt so."

Meanwhile, Dewan, who has been involved in organising anti-CAA protests in Delhi, reiterated the fight against CAA would continue. “What we have to do, the ones who are opposing CAA, we will continue with the struggle. In any case we would have continued, even if the hearings had begun today. We will continue until the CAA is repealed,” she said.