The Constitution House 8x6x6, Takes Tenets to the Masses

Wooden model of a house to explain the Constitution

AHMEDABAD: Eminent social activists have come together to ‘De-mystify’ the Constitution of India for the masses. This has been done through a wooden model of a house measuring 8 x 6 x 6 inches which beautifully explains the basic tenets of India’s most important, indeed sacred, document.

This ‘Constitution House’ is being released on the eve of the Republic Day, today on January 25 at Dalit Shakti Kendra in Ahmedabad in the presence of eminent activists like Wilson Bezwada, Jyotsana Yagnik, Minar Pimple and Madhusudan Mistry who has also been a member of both houses of the Parliament. The concept has been developed by Navsarjan organization.

Martin Macwan who has been working among the marginalized societies in Gujarat told this reporter, “Over the last few months I have been interacting with the youth and found that very few people actually understand what is to be saved of the Indian Constitution even as protests galore. In the discussions they are not able to express why the Constitution is under threat. I realized that the fundamentals of the Constitution need to be made a part of the community education. And this led us to use the metaphor of a house.” 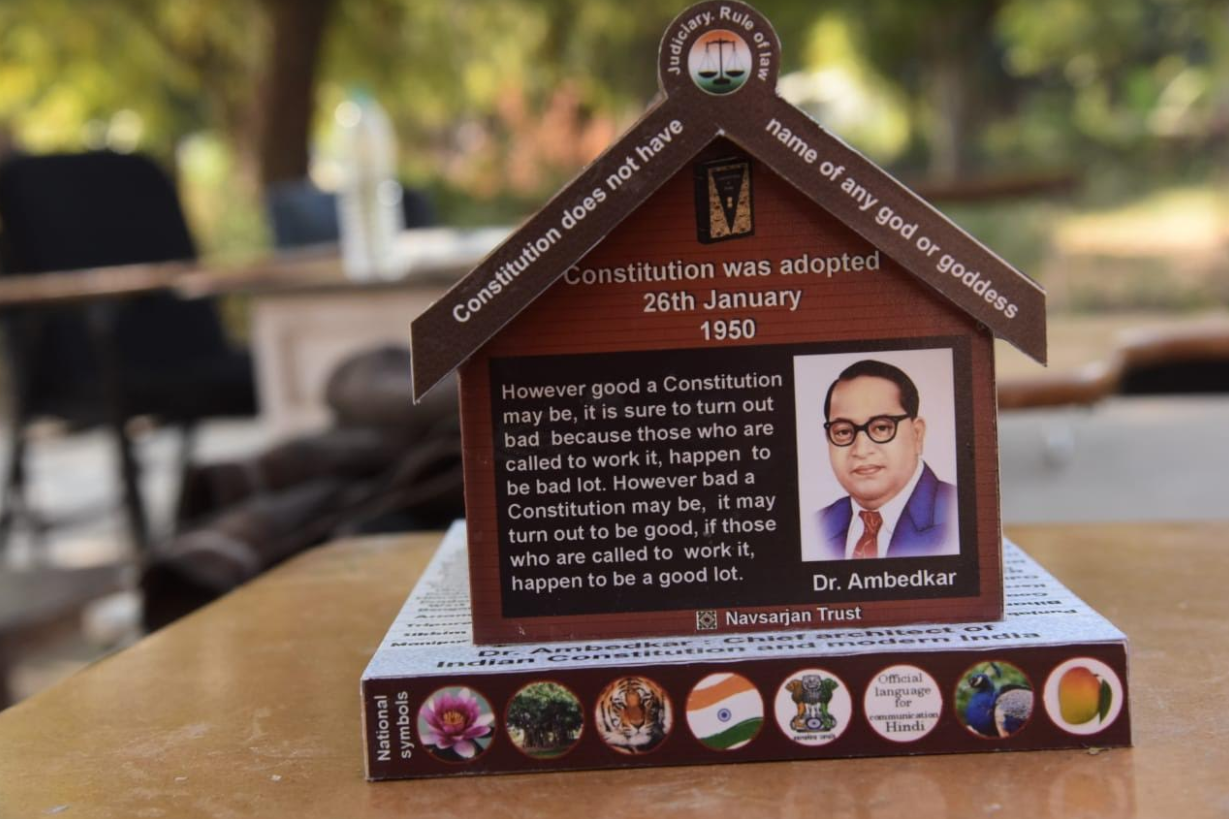 He said that the various dimensions of a house are being used to explain the fundamentals of the Indian Constitution in 22 Indian languages including some tribal ones including Dangi, Vasavi, Kukna, Gamit and Kutchhi. “The work in 12 languages has been completed while it is in final stages for others,” Macwan said.

The model of the house explains that India decided to be ‘Secular’, a home to people of all religions that makes all secure and equal. 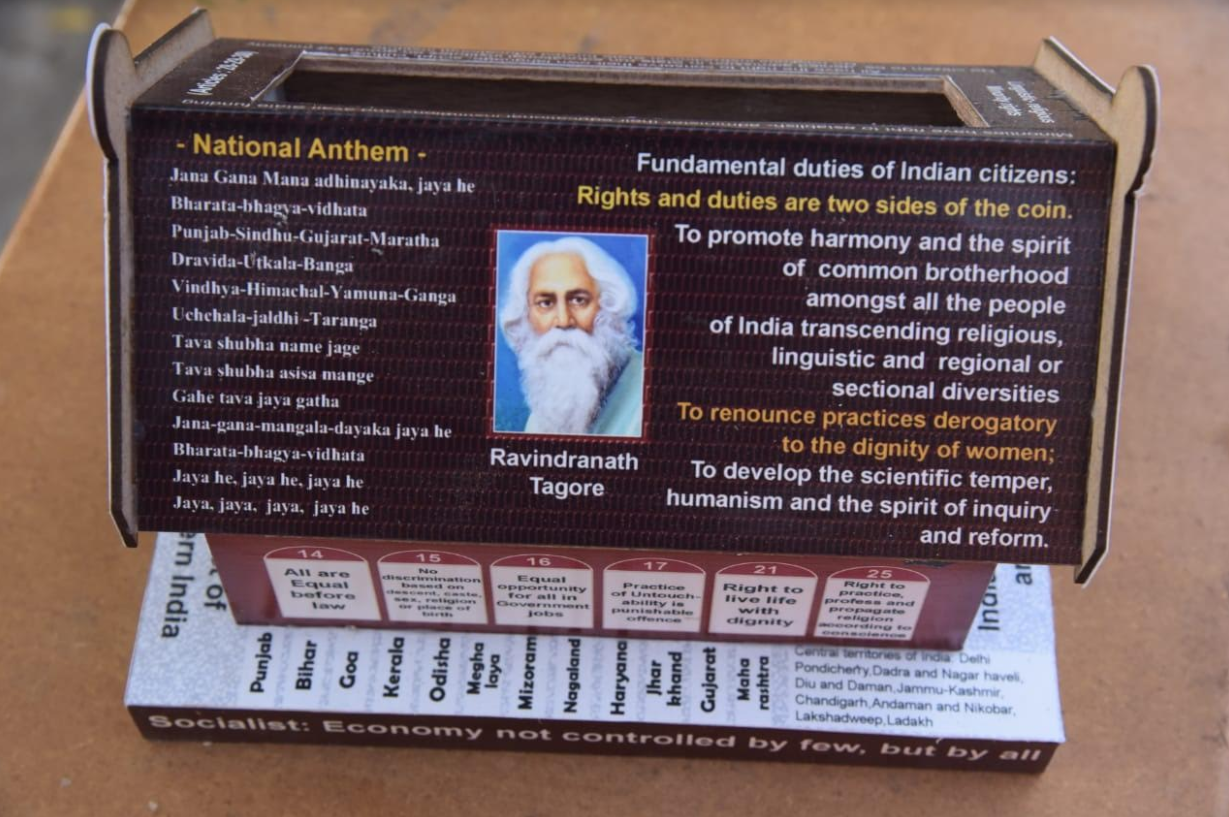 While referring to the foundation of this Constitution House, it has been explained that till the brickbats resembling prejudice, of caste, gender and religious sectarianism are melted and dusted into a layer of solid concrete-like earth under the foundation wall, the spirit of ‘Secularism’ will not become a reality.

The colourful outer portion called ‘Otlo’ in Gujarati welcomes all citizens with the message, “India is my country and all Indians are my brothers and sisters.”

The door of this Constitution House represents the guiding principle of ‘Equality’. It is open to all the citizens of India, irrespective of caste, race, gender or religion. The award of citizenship in India is not based on Religion. The constitution does not have name of any God or Goddess in its pages. 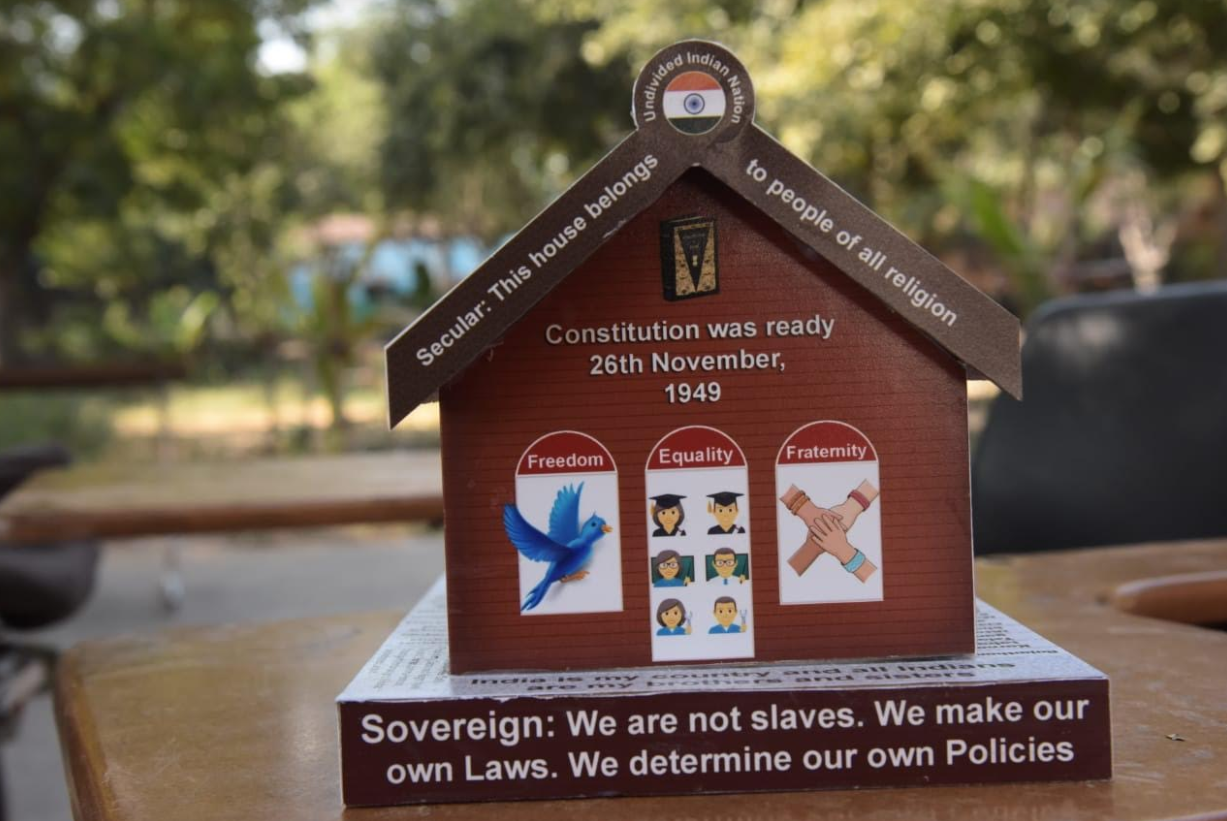 Similarly, the windows on another wall symbolize liberties to the citizens, freedom of thought and expression, liberty to assemble without arms, peacefully, to form associations, to move around the country without obstruction, to reside in any part of the country and to do any profession of choice. No one can be forced to stick to caste based occupations.

Three duties that are eye-catching are asking the citizens to transcend narrow religious, linguistic, regional and other divisions and promote harmony and brotherhood, renounce practices which are derogatory to dignity of women and develop scientific temper, humanism and the spirit of inquiry and reform.

The basic non negotiable house rules are the founding principles of Sovereign, Democratic and Socialist that have been mentioned prominently in the Preamble.

“The ‘Directive Principles of State Policy’ have been used to depict the backside of the Constitution House model. This is about the need for policies that can eradicate economic and social Inequality. Directive principles are guiding principles for the state to frame policies. The various programs that have emerged in India, after independence such as land re-distribution; law on minimum wages, Mahatma Gandhi National Rural Employment Guarantee Act (MNREGA), the rights of workers of organized or unorganized sectors, compulsory education until the age of 14 years, rights of women in the family property have been rooted in these directive principles.

These principles also focus on access to justice. No citizen can be deprived of justice for lack of money; hence there is free legal aid as a right. The separation of Judiciary from the Executive is ensured. Lastly, there is focus on protection of environment, land-forest-water and air. These principles direct us to adopt scientific agriculture and animal husbandry,” Macwan added.

It has been explained that just like in the case of water well, as the water can not rise itself and fill our pots, the policies and programs do not walk to our doorsteps. The citizens have to pull the water from the well through the hand pump. The alertness from the citizens about their rights requires to be maintained at all the times.

Macwan said that a lot of civil society organizations are showing an interest in procuring this Constitution House model to educate the masses. 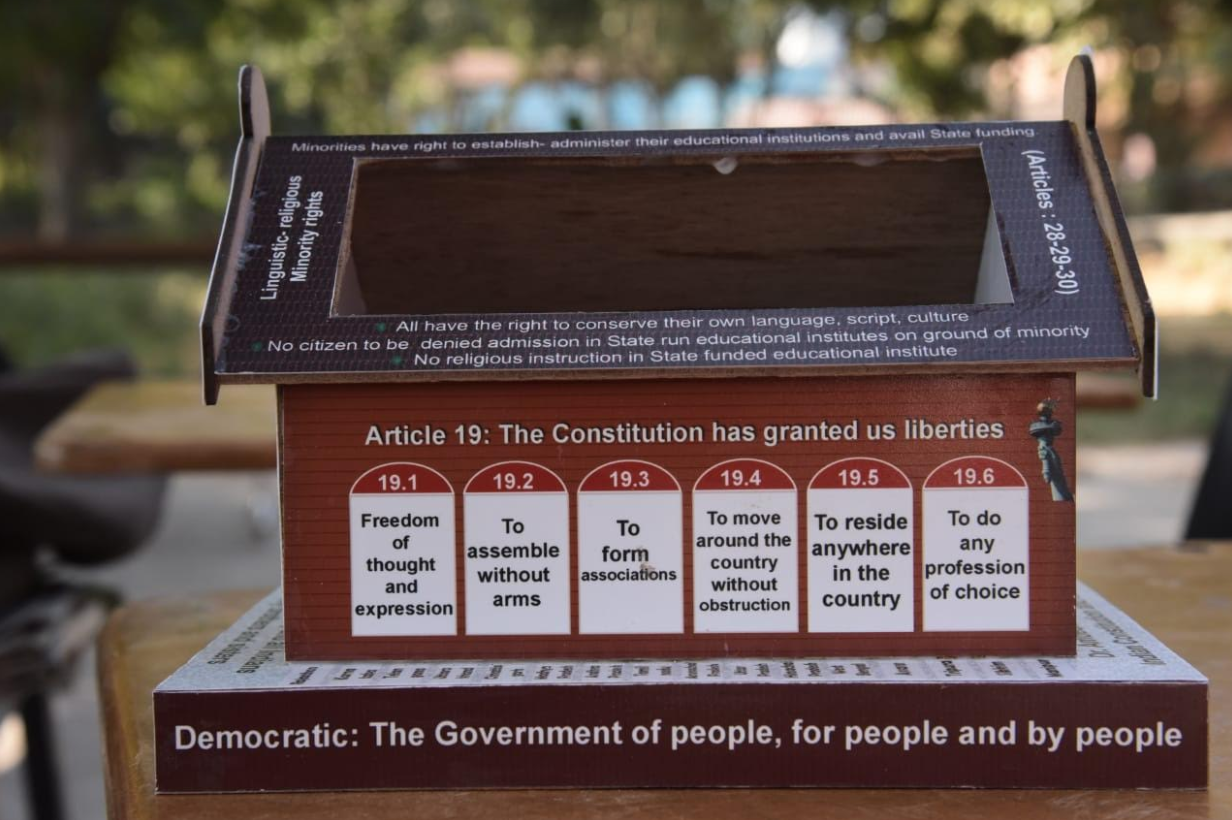