'We will not spare a single mosque built on government land'

NEW DELHI: Shaheen Bagh, where hundreds of women have been holding a sit-in protest against the Citizenship Amendment Act for more than a month, will be cleared “within one hour” if the BJP comes to power in Delhi, Lok Sabha MP Parvesh Verma reportedly said while addressing the public at a community centre in Ranhola village, West Delhi on Monday.

“Lakhs of people gather there. The people of Delhi will have to think and take a decision. They'll enter your houses, rape your sisters & daughters, kill them. There's time today, Modi ji & Amit Shah won't come to save you tomorrow,” Verma, the MP from West Delhi, told ANI on Tuesday.

He further said, “The people of Delhi are safe only till Modi ji is the Prime Minister of India.” 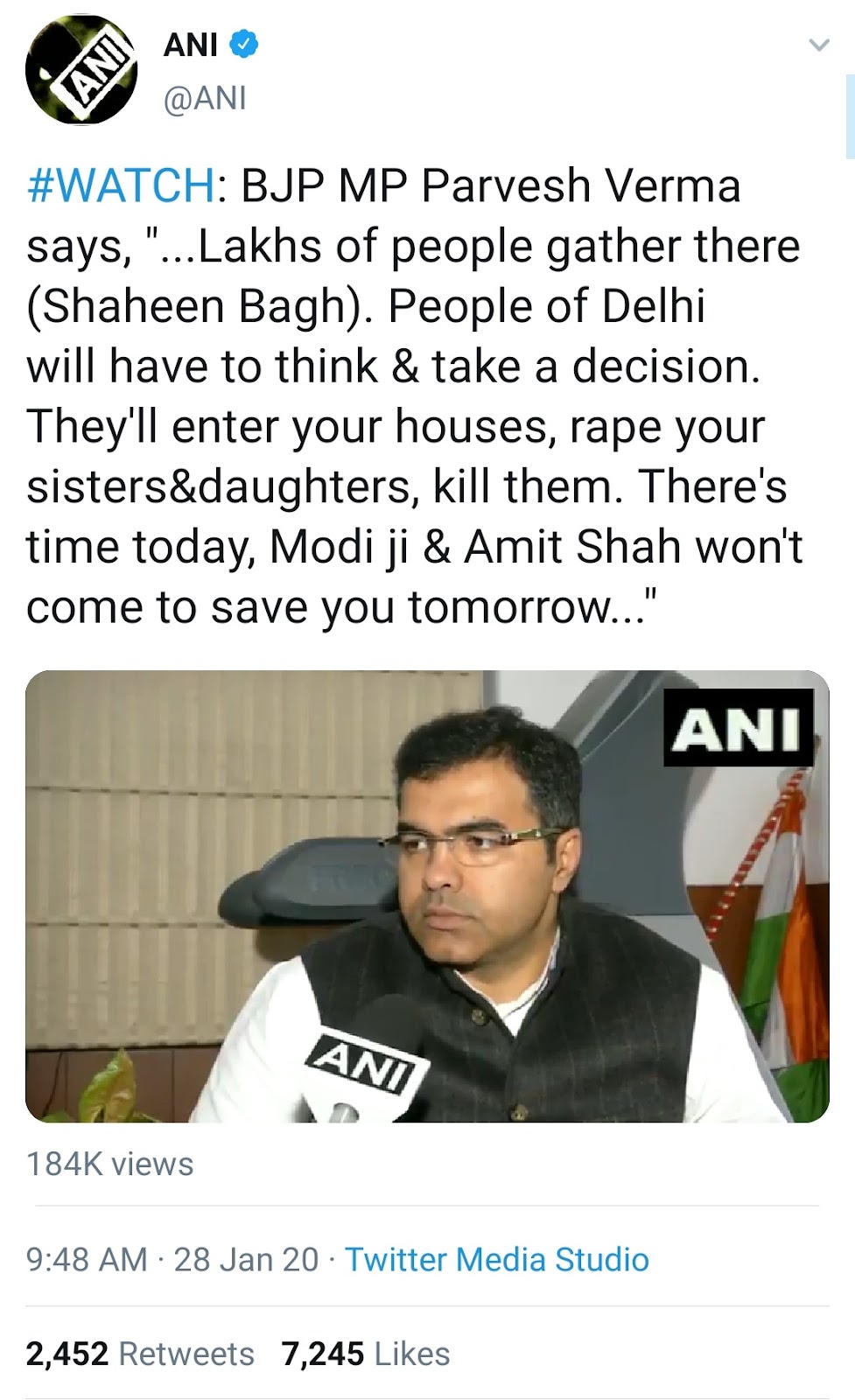 Ahead of the Delhi Assembly elections scheduled to be held on February 8, the women-led protest at Shaheen Bagh has become an integral part of the BJP’s election campaign, as reported by the media.

Verma’s comments come a day after reports emerged of Union Minister Anurag Thakur encouraging his audience at a rally to shout provocative slogans such as ”Desh ke gaddaron ko, goli maaro saalon ko” (These traitors to the country: shoot the bastards).

The slogan was famously raised by BJP candidate Kapil Mishra at a rally in Delhi on December 20. The party’s Delhi unit distanced itself from the slogan but gave Mishra its MLA ticket from Model Town soon after.

In response, activist Saket Gokhale has sent an application to the Delhi Police requesting permission to organise a peaceful protest at the Jantar Mantar in New Delhi while shouting the same slogan. 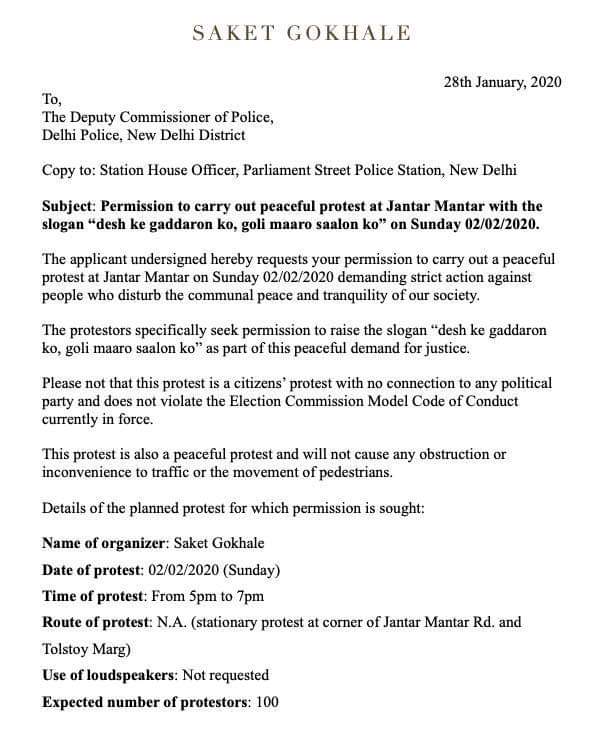 Gokhale took to Twitter stating, “Important: I’m applying for permission to @DelhiPolice this week for taking out a rally chanting “desh ke gaddaron ko, goli maaro saalon ko”. This is the only way left for getting Delhi Police to answer whether this disgusting slogan is allowed under law.”

He further tweeted, “If they grant me permission, they’re going to have to do a lot of answering in court for allowing this slogan. If they refuse, they need to arrest Union Minister Anurag Thakur & BJP candidate Kapil Sharma for raising this slogan at their rallies. Hum bhi dekhenge.”

On Sunday, media reports had Union Home Minister Amit Shah stating, “Your vote to the BJP candidate will make Delhi and the country safe and prevent thousands of incidents like Shaheen Bagh.”

"When you press the button (on the voting machine) on February 8, do so with such anger that its current is felt at Shaheen Bagh," Shah reportedly said at an election rally in the Babarpur assembly constituency.

Activist Harsh Mander believes that Lok Sabha member Verma’s comments on Shaheen Bagh are indicative of many things. “One is that the people’s protest has really unnerved the BJP and the ruling establishment. Unnerved, almost unhinged them,” he told The Citizen.

While campaigning in Vikaspuri, Verma further told the press, “The people of Delhi know the fire that once broke out in Kashmir, where the sisters and daughters of Kashmiri Pandits were raped… The same fire broke out in Uttar Pradesh, in Hyderabad, in Kerala, and now the same fire has broken out in a corner of Delhi.”

Verma further stated that not a single mosque would be found on government land within a month of the BJP’s coming to power in Delhi.

“This is not just another election. It is an election to decide the unity of a nation. If the BJP comes to power on February 11, you will not find a single protester within an hour. And within a month, we will not spare a single mosque built on government land,” Verma told the media.

CPI-M politburo member Brinda Karat told The Citizen, “What he (Verma) said is absolutely appalling and outrageous and there should be an immediate FIR lodged against him.”

Subhashini Ali, president of the All India Democratic Women’s Association asked, “Is this kind of polarisation that is taking place? Seeing that these protests are taking place in certain localities, if it is going to help BJP then that is what we should be thinking about more seriously.”

According to Mander, the fact that a “group of working class women who are protesting” has gotten into “the mindspace of the union home minister” shows “how much impact they have had and how much these protests have actually changed the political discourse in a positive way.”

“Their old tried and tested method is to identify everything with the Muslim identity and then demonise it,” Mander told The Citizen. “The kind of post communal prejudice and misogyny reflected in their observations is part of the standard playlist of the BJP. But somehow again, it is just not working this time.”