On January 30, marking the 47th day of their protest, Shaheen Bagh released a statement alleging “threat from violent fringe elements is growing”, advocating “a peaceful dialogue” as the only way forward.

The statement came on the day a man opened fire at a student march, injuring a mass communication student from Jamia Millia Islamia University and two days after an armed man, brandishing a gun, allegedly threatened the protestors at Shaheen Bagh to end their agitation. It also mentions the incident of January 29, the day the “Hindu Sena put out a statement terming us “jihadis” and a call to its affiliates to clear our protest on 2 February 2020”.

“Given the recent incidents, any violent attack on or at our peaceful protest must be attributed to the inaction and tacit support of the regime which has refused to enter into a dialogue with us,” the January 30 statement reads. “We refuse to be cowed down by violence or threats. The only way forward is by a peaceful dialogue that acknowledges the real grievances of the public, in the best traditions of our democracy,” continues the statement.

The women reiterate that they are exercising their democratic rights to protest peacefully, placing the onus to prevent untoward incidents upon the Central government and Delhi Police, according to the press release. 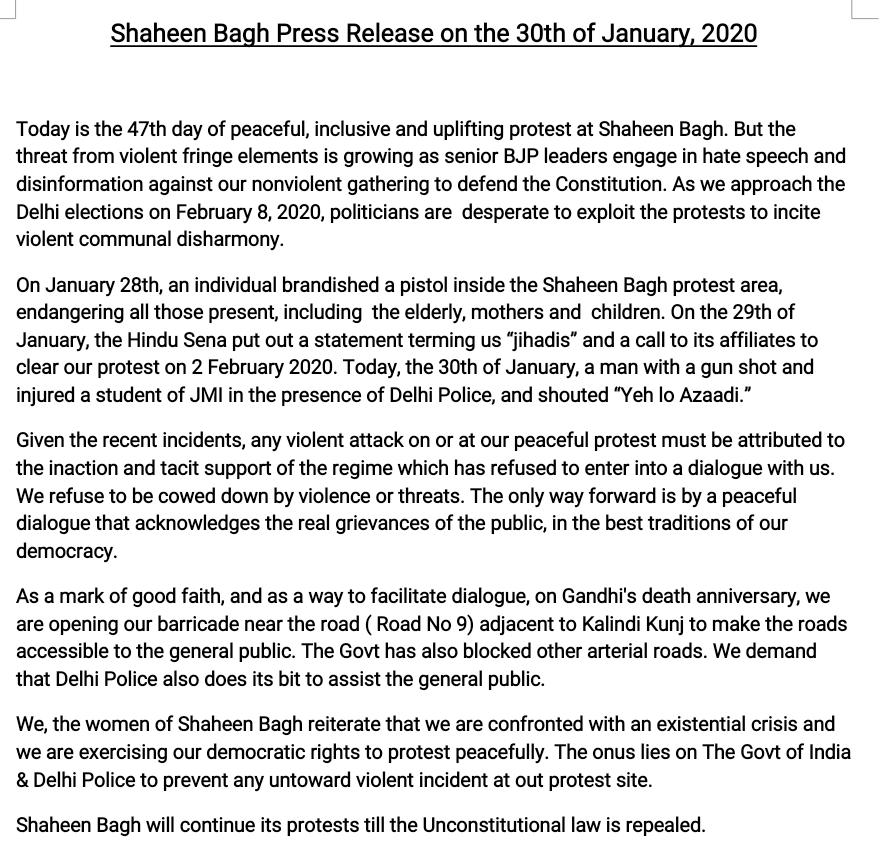 Recently, various media reports have emerged highlighting controversial incidents and statements regarding the 24X7 sit-in protest at Shaheen Bagh—including the alleged manhandling of journalist Deepak Chaurasia at the protest grounds, the contentious statements made by JNU student Sharjeel Imam who is believed to be a “Shaheen Bagh protest organiser” and the reports that claim the protesting women are being paid Rs. 500 to continue their sit-in. However, Shaheen Bagh protestors have distanced themselves from these incidents, reiterating their demonstration to be a “non-partisan citizen’s movement”.

Sharjeel Imam, who has been arrested for making “inflammatory speeches” at Aligarh Muslim University on January 16, has been touted as the “mastermind” behind the Shaheen Bagh protest by certain media. Sedition cases were reportedly filed by the states of Assam, Uttar Pradesh, Arunachal Pradesh, Manipur and Delhi against Imam when a video of his speech, wherein he makes controversial remarks to “cut off Assam from India”, went viral. Later, Shaheen Bagh Official, claiming to be the official Twitter handle of Shaheen Bagh, released a statement saying, “No one person, whether Sharjeel Imam or someone else, can be termed as the sole organiser of the protest.”

“The protest has been led by the women of Shaheen Bagh and it is unfair to associate their voice with any distorted media narrative,” reads the statement. It further emphasises that the “contentious statements in question” were not delivered in or around the Shaheen Bagh protest grounds. 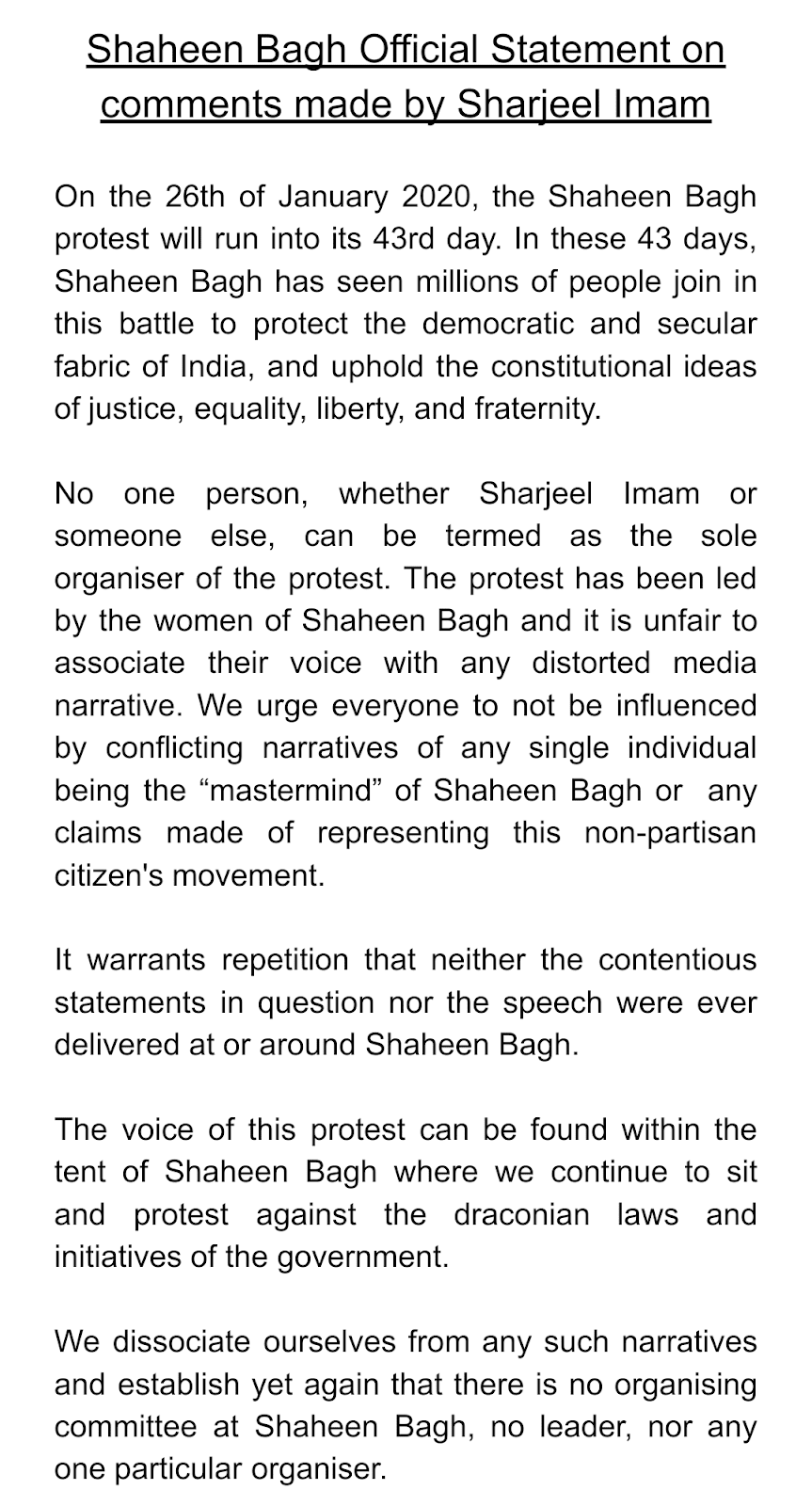 “Shaheen Bagh protestors have taken a very reasonable, sensible and democratic stand,” political scientist Zoya Hasan told The Citizen. “Their protest is framed within the framework of the Constitution and therefore anyone who is trying to incite people or is making provocative speeches, they have clearly distanced themselves from it and have unequivocally condemned it,” she said.

These are not the first statements Shaheen Bagh has released. Earlier, a statement was released condemning the manhandling of journalist Deepak Chaurasia who was allegedly shoved by unknown persons while present at the protest grounds on January 24.

“We are looking into what exactly happened, but whatever the reason, manhandling someone is unacceptable. This is not what Shaheen Bagh represents. We condemn any such acts unequivocally,” the statement reads. 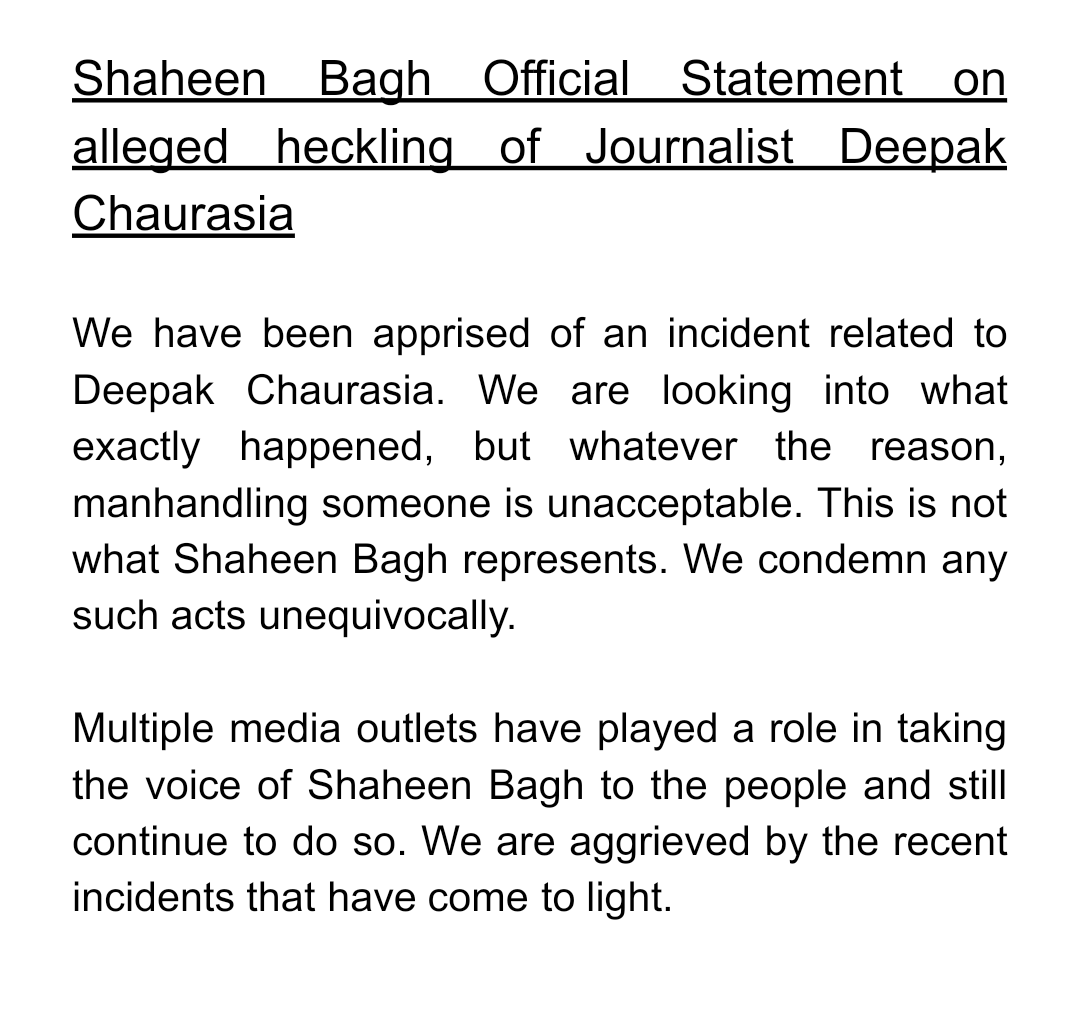 Shaheen Bagh statements have also taken on the issue of fake news being circulated via WhatsApp and social media “attempting to tarnish the secular nature of the movement.” “What they are doing is right—distancing themselves from all kinds of unwarranted controversy that will just undermine their struggle,” said Latha Jishnu, independent journalist.

Another such controversy that emerged recently was a “sting video” that claimed the Shaheen Bagh women, who have been constantly making headlines, are being paid to continue their protest. Two women protestors, Nafisa Bano and Shahzad Fatma, reportedly sent a defamation notice to head of BJP IT Cell, Amit Malviya for claiming the protestors were being paid Rs. 500 by the Congress party to continue the sit-in protest.

The notice reads, “A video posted and endorsed by you on social media site Twitter, which has been played across several media platforms, had alleged that the protesters are taking Rs 500-700 in order to be a part of the protests.”

“Such statements are not only false but also have an effect of defaming the protestors in the national and international community,” it continued. Shaheen Bagh Official’s statement on the issue read, “Whether it’s 15 lakh or 500, we are not interested in the money offered by any political party. No amount of money can compensate for this attack on our citizenship and fundamental rights.” 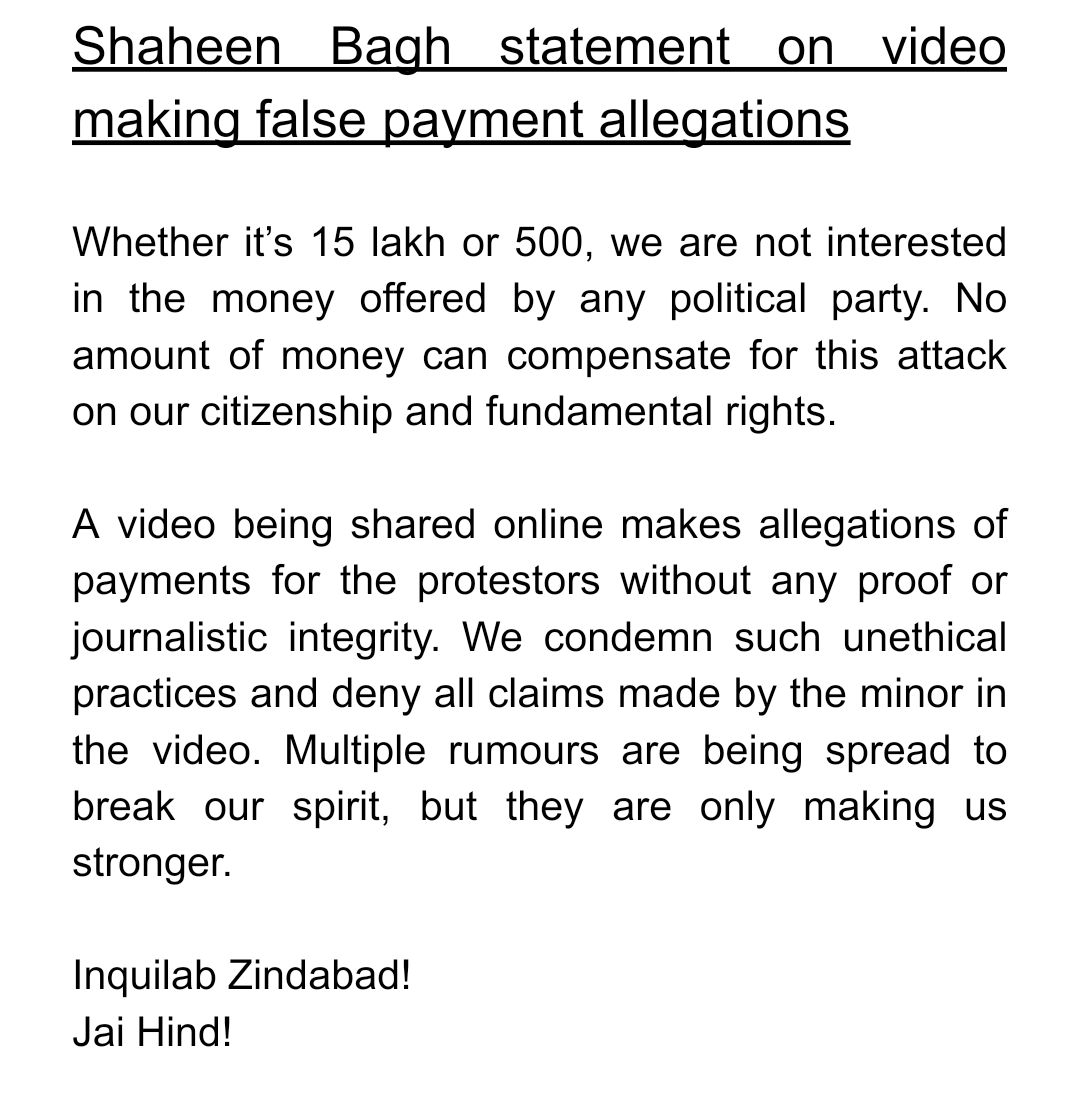 Many claim such incidents are attempts to “defame” the women of Shaheen Bagh who have led a peaceful protest for more than 45 days against the contentious CAA and NRC. The women’s stand is clear. “There are so many attempts being made to corner them and they have just not fallen into the trap. By just staying focused on their main concern which is that the CAA is discriminatory, it is unconstitutional and it must be withdrawn to uphold equal rights and non-discrimination,” Hasan told The Citizen. “The protestors don’t want anything that would distract and divert from this position,” she continued.

“It’s amazing, the way the women have come out,” stated Shabnam Hashmi, social rights activist and human rights campaigner. Hashmi highlighted how young girls and women from all communities have joined the Muslim women in this “remarkable” feat. “Women like this have not come out in India since independence and maybe even before that… not in these numbers,” she told The Citizen.

According to her, the women are not only expressing their dissent against NRC and CAA but are simultaneously fighting age-old patriarchal barriers meant to confine them within traditional roles. “I'm sure that they will not go back now,” Hashmi stated. “It might not happen immediately but this process has started, which is amazing,” she said.

“The BJP’s effort to malign Shaheen Bagh and also to use it to polarise the Delhi Election, that is highly condemnable,” Hashmi told The Citizen. “Frankly, the government doesn't know how to handle what's happening in our country.”

“They thought like on everything else, people will keep quiet and [instead] there are protests across India and especially when women come and protest, they know what it means. So they have no other way but to malign these protests. That is the only thing they know—polarise, communalise, malign. So they are doing what they are best at,” she stated.

Jishnu in turn highlighted her own experience speaking with the women of Shaheen Bagh and what struck her to be a “very spontaneous protest”. “They are not putting out any leader for their own struggle nor are they taking any current day political figures as their leaders,” she stated.

While pictures of Bhagat Singh and Ambedkar can be found in great numbers at the protest site, “they do not have any local, any current politician as their leader even though many have come and spoken there,” Jishnu explained. “So what is very clear is that women are doing something on their own,” she told The Citizen.

In response to Jishnu’s question on whether they would continue this struggle for other causes related to “people’s oppression”, the women responded in the affirmative. “How come you never protested about Article 370?” Jishnu asked.

“That was a miss on our part but we are going to make up for it,” the women responded. “Sure enough, some days later, they had something for the Kashmiri protestors. And they were also supporting the Pandits,” Jishnu told The Citizen.

In fact, in response to allegations that Shaheen Bagh is celebrating January 19—the day that is marked by the exodus of Kashmiri Pandits from the state of Jammu and Kashmir—Shaheen Bagh Official released a statement saying the “people of Shaheen Bagh recognise the injustices done to our Kashmiri Pandit brethren on 19th and 20th January 1990 and will stand in solidarity with them.” 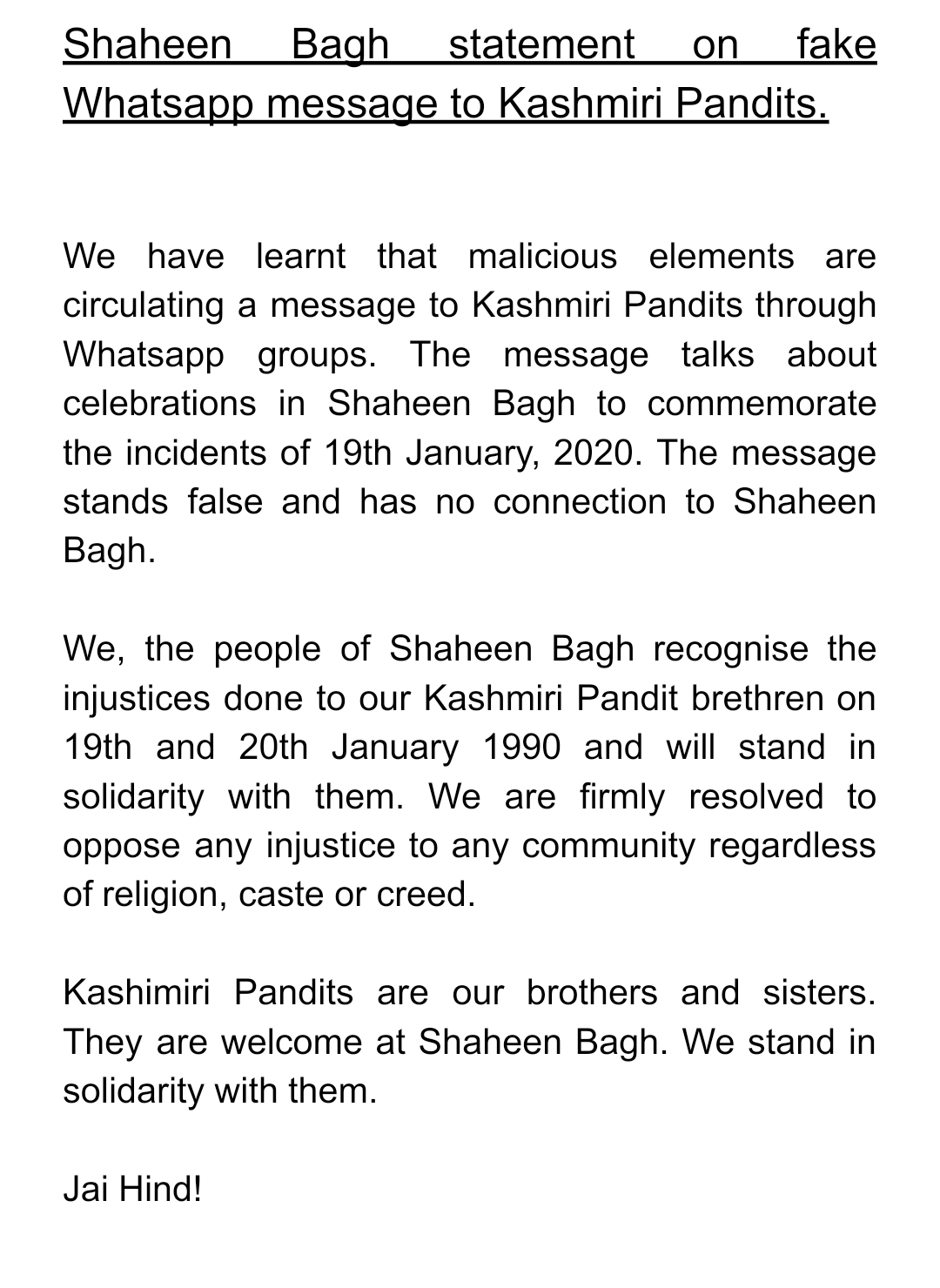 “What it (Shaheen Bagh) stands for is a political awakening among middle class, conservative women and I think it's a great thing and we all have to support it without romanticising it,” Jishnu stated.

Shaheen Bagh distancing itself from controversial incidents becomes important today, according to Hasan, as it signifies that the protest is well within the constitutional framework. “This protest is remarkable precisely because they are identifying with the Constitutional project and anyone who is speaking or working outside it would weaken the resistance against CAA,” Hasan stated.