A first for Dwarka

NEW DELHI: The largely upper-middle-class sub-city of Dwarka, often a sedate neighbourhood where residents show a marked disinterest in the election process (the sub-city report very poor percentage of voting every election day) or social order in general, got stirred by an ‘Anti CAA’ rally in the evening of January 30, 2020.

On the evening of January 30, to mark Mahatma Gandhi’s death anniversary, the residents of Dwarka came together to hold a peaceful candlelight march to protest against the CAA and NRC brought in by the Central Government. 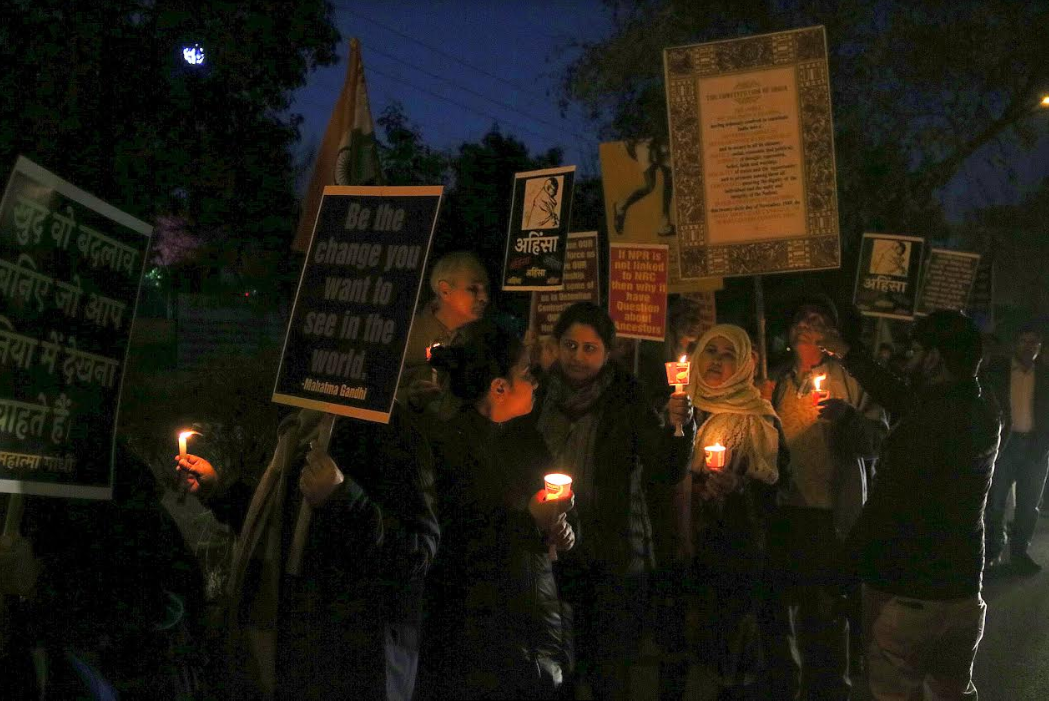 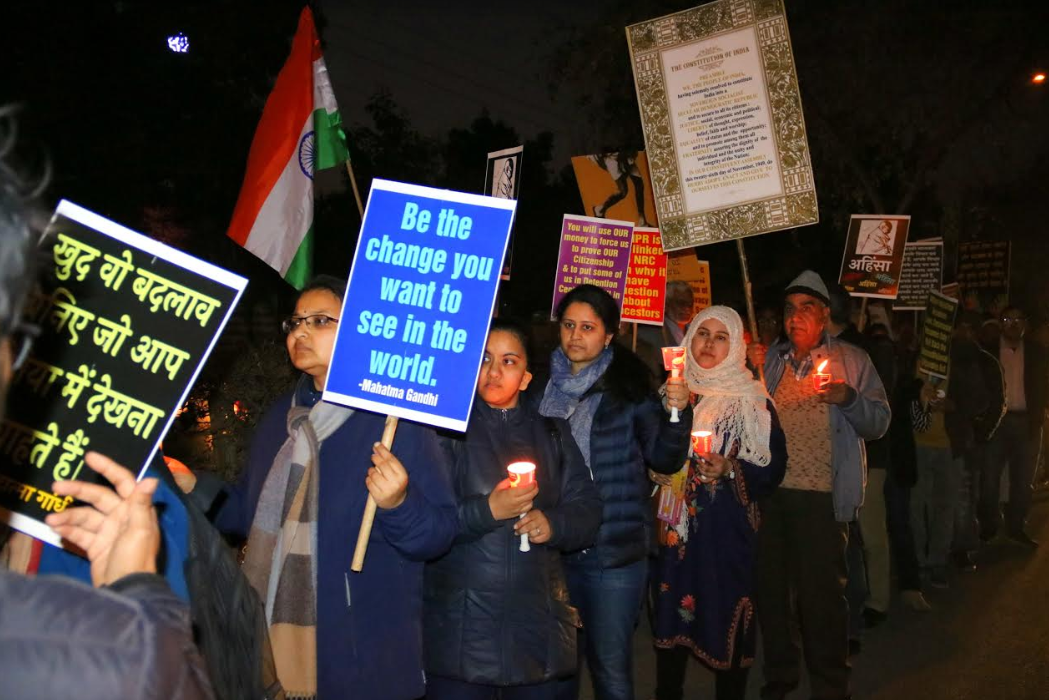 The call for the rally was to “save the constitution.”“This is the first time we are seeing something like this in Dwarka. I have been living in the sub-city since 2005 and never have any protest rally taken place here before,” says Neha Bhasin, one of the participants at the rally.

The protest was organised by area residents under the umbrella of Dwarka Collective, a motley resident group that has been, for the last three years, actively engaged in conducting public lectures, discussion and cultural events in Dwarka on a variety of issues affecting the common man. 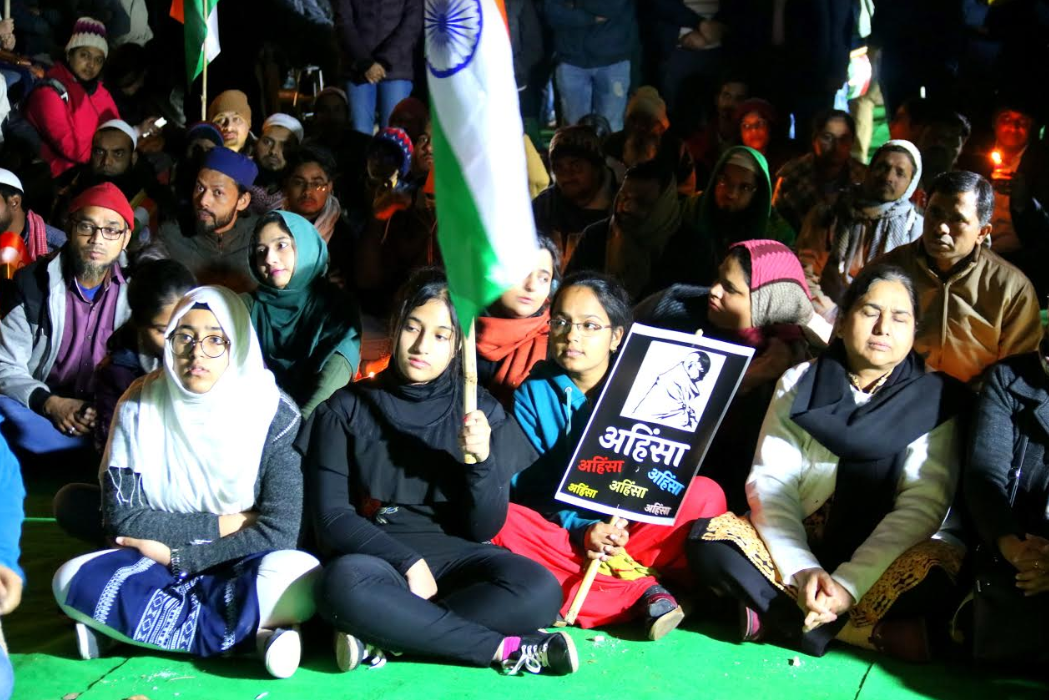 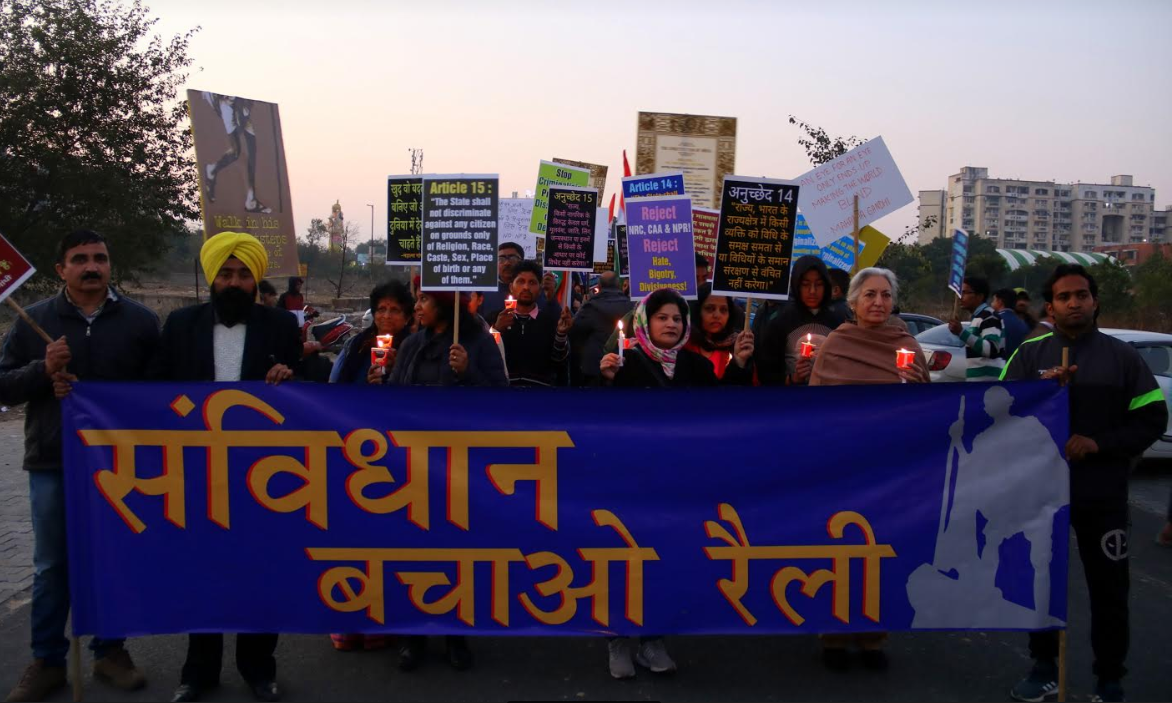 The rally comprised people from different communities. , Tara Pillai, a resident of Sector 13, Dwarka, said, “We wanted to show that it is not just one minority community that is protesting against the CAA. Our rally is made up of individuals from all the different minority and majority communities living in Dwarka. The attempt to temper with the nation’s constitution by the present establishment is a common concern for all of us.”

The march was of people from all age groups with very strong participation from the women of the sub-city. All the protesters marched in silence, though the placards, banners, the tricolour and the candles they marched with, carried home their message very effectively. 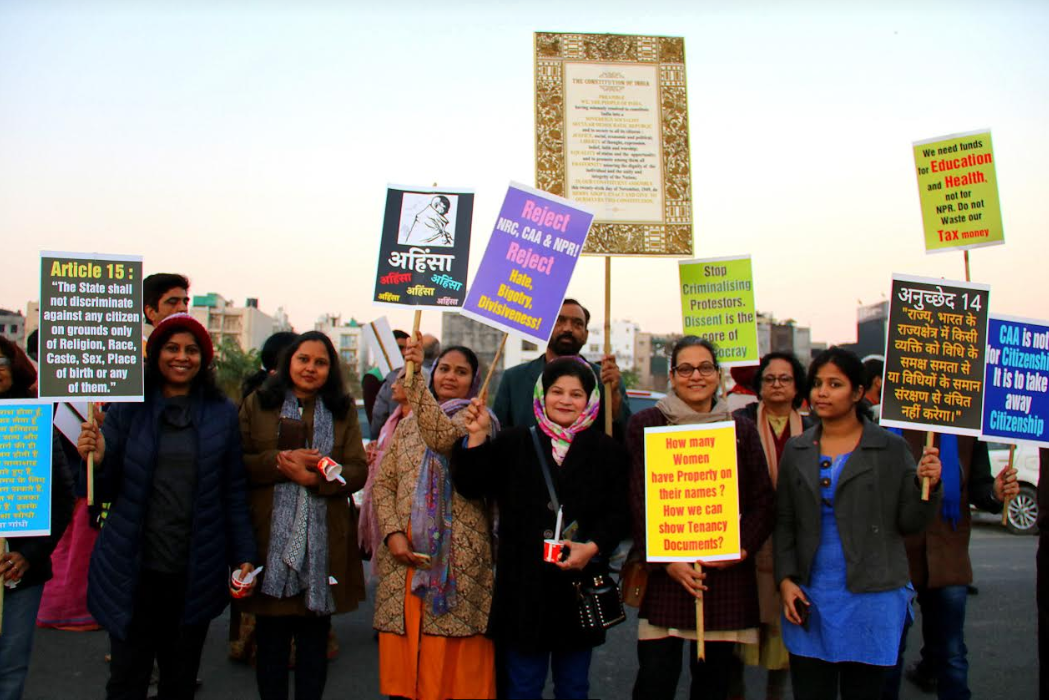 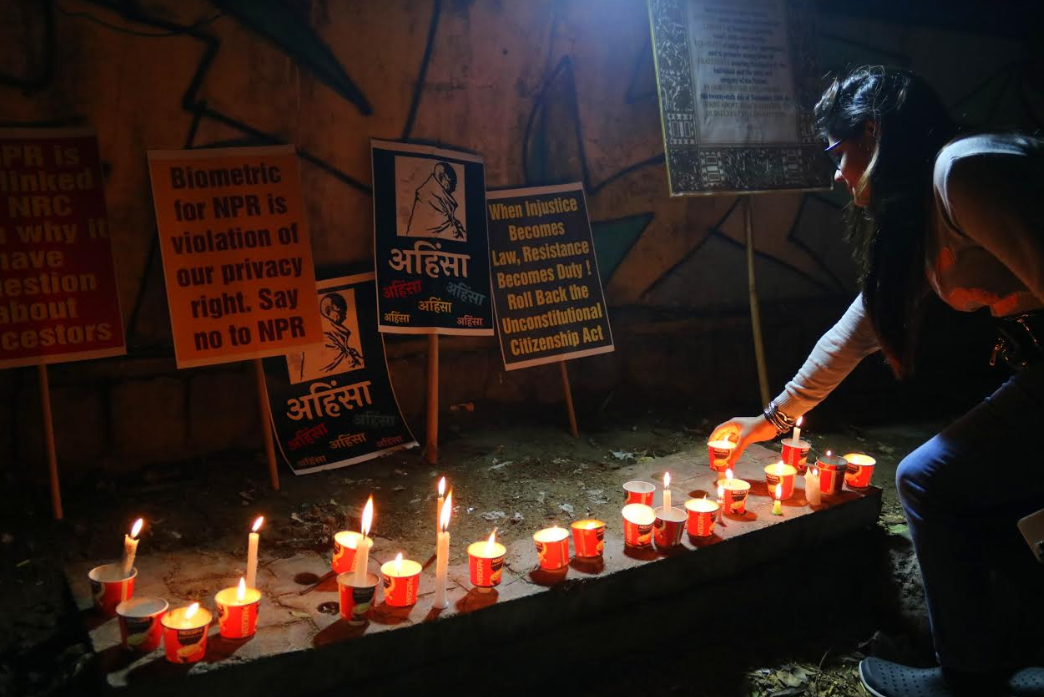 Right from the beginning, there was an attempt by a group of men to disrupt the candlelight march. A group of around 40 men, who were clearly pro CAA, tried their best to create a ruckus by shouting objectionable slogans right through the anti CAA protest march. But to their credit, the people in the candlelight march did not respond or react to this blatant provocation.

Pratap Dhunta (65), a resident of Sector 8, Dwarka, and one of the organisers of the candlelight march, said, “If they have a different point of view then they should hold their own rally. Who is stopping them from doing it? But trying to create problems during our protest march is totally wrong and blatantly aggressive. I have never seen such behaviour in my life though I have seen several protests in Delhi in the past. This is a clear sign of the changing times we are living in and makes our cry to save the constitution even more important.” Finally the Delhi police and CRPF personnel moved in and separated the slogan-shouting Pro CAA group from the candlelight procession so that the march could continue unhindered. 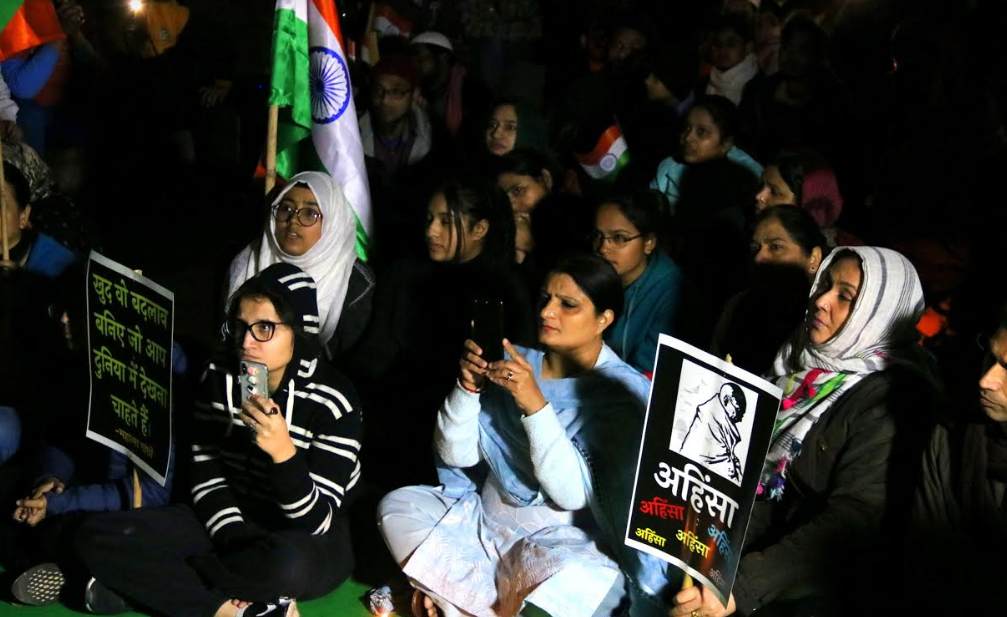 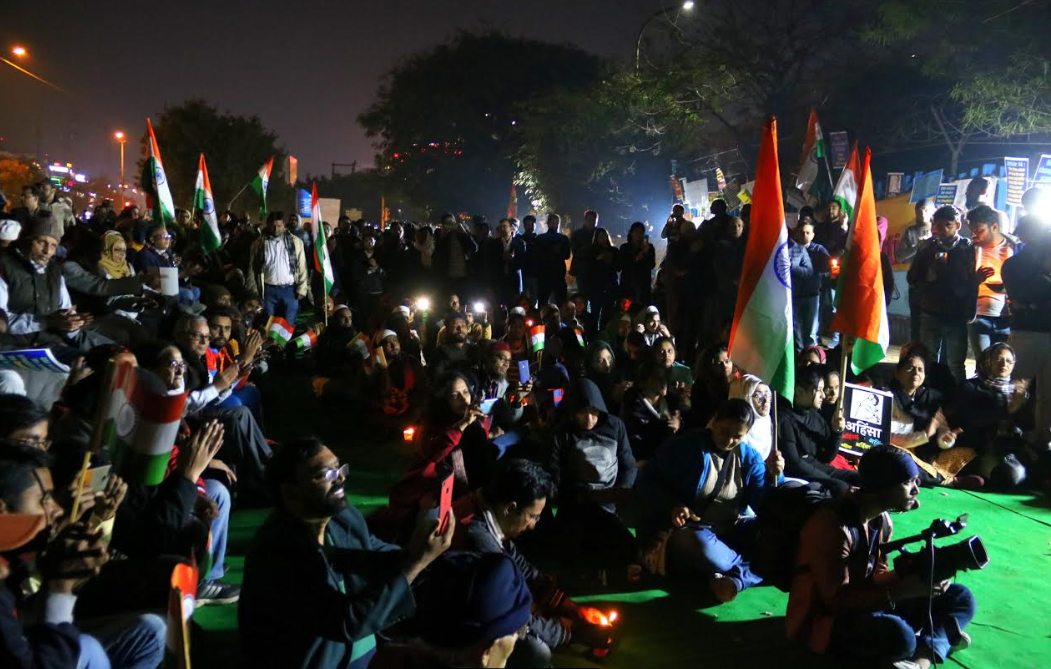 The 3 kilometres long march that went through the heart of the sub-city, started from Dwarka city centre, sector 12 and culminated near Dwarka sports complex, sector 11, in a group gathering. Here the participants sang songs of communal harmony, recited protest poetry and made speeches against the CAA, NRC, the generally communally divisive policies of the Central Government and attempt to tamper with the constitution of the country.