Choley bhature or chana bhatura is a quintessential street food which Dilliwalas love. There it a lot going its way: it’s served hot, doesn’t need much room to make or sell, can be consumed in a jiffy, is filling and still relatively inexpensive.

Although this favourite Delhi snack is consumed through the year, winters are the best time for it. So before winter draws to a close, grab a plate from one of the many famous joints spread across the city.

Many markets and residential colonies of Delhi have their own popular choley bhature joints. We list here some of the city’s best choley bhature makers, with a fan following much beyond their immediate vicinity.

It was Punjabi refugees who brought choley bhature to Delhi in the turmoil of Partition in 1947. The dish, popular among the migrant Punjabi community, soon caught the fancy of other Dilliwalas.

Till then Dilli’s favourite breakfast snack was probably bedmi puri, which had its origin in Uttar Pradesh, and aloo sabzi. These are now confined to the Old Delhi area. Soon outlets selling choley bhature cropped up all over Delhi, and the food scene is not much different even today.

When it comes appreciating your plate of choley bhature there are two schools of thought. Followers of the first believe the quality of the bhatura is what makes or breaks the dish. Some like it fluffy and soft, some like it puffed up, a bit crunchy and crisp. Some like it light and others prefer it stuffed with mashed spicy paneer…

Then the choley school: those who believe the most important part is the chickpea gravy. For the preparation, chickpeas are cooked with a thick onion and tomato gravy along with many spices, such as cumin (jeera), coriander (dhania) and anardana (pomegranate seeds).

You will come across many people swearing by the taste of choley-bhature at one outlet or the other. They will say it tastes better than anywhere else. Others will expound on the texture, size, softness and filling of the bhatura on offer.

The outlets considered here generally turn out a good version of both parts of the dish. And though the bhaturas come fixed at two per plate, all these outlets will let you have an extra helping of choley at no extra cost.

Asking for and getting an extra portion of choley is an unsaid norm here. That’s why almost everybody takes that extra bit of choley. And owing to their lip-smacking taste it does make sense.

The combination usually comes with pickles, cut onions and green chillies. Some places offer a glass of lassi (sweetened blended yoghurt) to go with. Combining lassi with your plate of choley bhature is a great idea, as it not only helps wash down the oily preparation but helps digest it too.

The list compiled here consists of places that specialise in the dish, where the whole setup and infrastructure is tuned to turning out huge quantities of choley bhature at a brisk pace.

Any list of choley bhature in Delhi has to begin with Sitaram Diwan Chand Choley Bhature Wala from Paharganj. If fame is the measure of the taste of choley bhature, this outlet would win hands down. It’s a family run place that serves just one dish, and they have been doing it for decades.

Currently run by Pran Nath Kohli, the business was started by his grandfather Sitaram Pran Nath and continued by his father Diwan Chand Pran Nath. 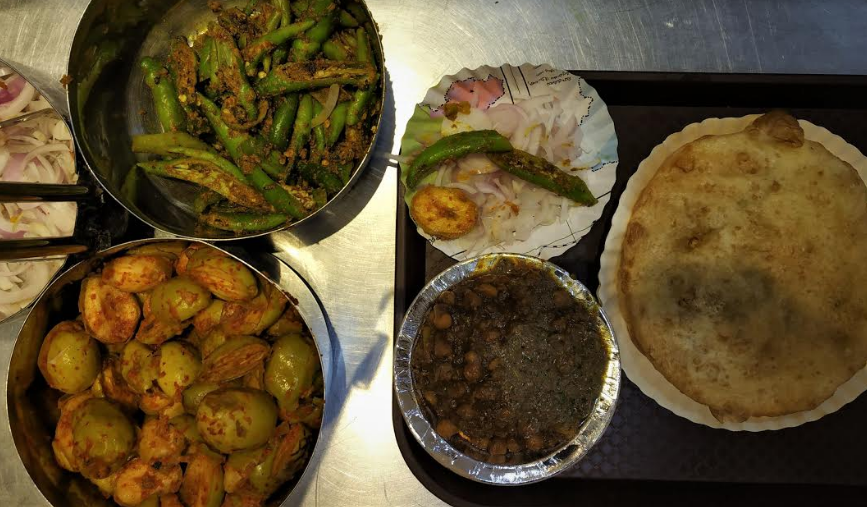 It was in the early 1950s that they started selling choley-bhature from a pushcart in the Paharganj area. After a few years, they set up a temporary shop near the Imperial cinema. Over the years they’ve operated from many different places in Paharganj, and moved to their present location in Chuna Mandi in 2009.

A plate of steaming hot choley-bhature costs 60 rupees here, and can be had from 8 in the morning till 6 pm. The outlet has no seating but a few tables where you can stand and eat.

Their bhatura preparation stands out. They are soft and adept at soaking in the choley gravy, adding great pleasure to every morsel. You can add a glass of lassi to add to your meal here.

This must be the most popular choley bhature outlet in South Delhi.

Located in a local market the shop does a bit more than just chole bhature, though it remains their standout preparation. It has an attached eating hall with a 'stand and eat' arrangement, similar to Sitaram’s in Paharganj. 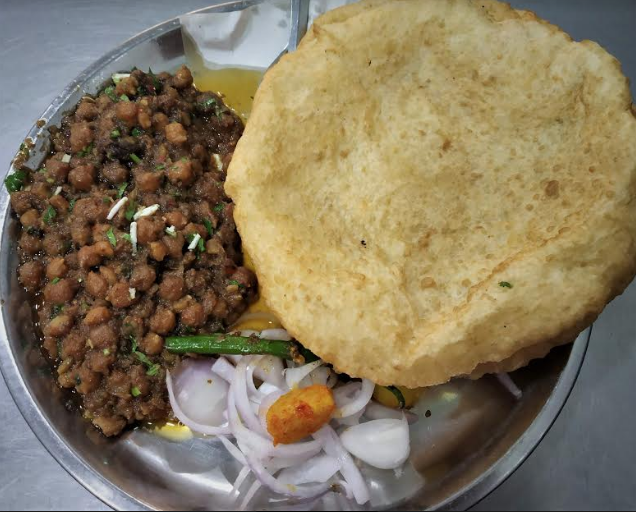 It is a nondescript outlet, though the popularity of their choley bhature preparation can be judged from the crowd that is seen here almost throughout the day.

The bhaturas here have a crispy feel while the choley is definitely on the spicy side and a bit high on oil. Another place that offers lassi to go with your plate.

This outlet is located right opposite the New Delhi Railway Station on the Paharganj side. The bhaturas served here are filled with a layer of spiced mashed paneer. Their choley preparation is mild on spice and in a thick gravy.

Being near the railway station it’s a place that remains busy throughout the day. On the downside, it is located on the noisy main road and lacks a proper space where you can indulge in your plate of choley bhature.

But the lovers of the dish do not seem to mind these drawbacks, and have been flocking to this outlet for years. You can also opt for a lassi here to go with your meal.

The outlet is tucked away like a secret behind the Scindia House building in Connaught Place. You can’t just pass it by. You need to know about its fame and location before you can dip into the excellent plate of choley-bhature on offer.

To reach it, take a bylane from Janpath or Kasturba Gandhi Marg, located behind the Anand Restaurant of chicken biryani fame. Bhogal’s offers a very well done plate of choley to go with your bhaturas. They even have a piece of kofta (here, a spiced gram flour dumpling) in their choley preparation.

The setting is very atmospheric and looks nothing like your idea of an eating joint. The person dishing out choley sits on a high pedestal with utensils set around him. You have to stand and eat your portion placed on a rickety high table.

Very popular with officegoers in the Connaught Place area, the outlet operates from 8 am to 3 pm. They do a very popular fried rice and choley combination too which tends to finish off pretty early.

This has to be the most popular choley bhature outlet this side of the city. Located in the middle of a middle-class residential area, the outlet draws a lot of family crowd. Their choley preparation has a mild taste and smooth texture. The bhaturas they serve are on the crispy side. A lot of people get their portions of the dish packed for home. 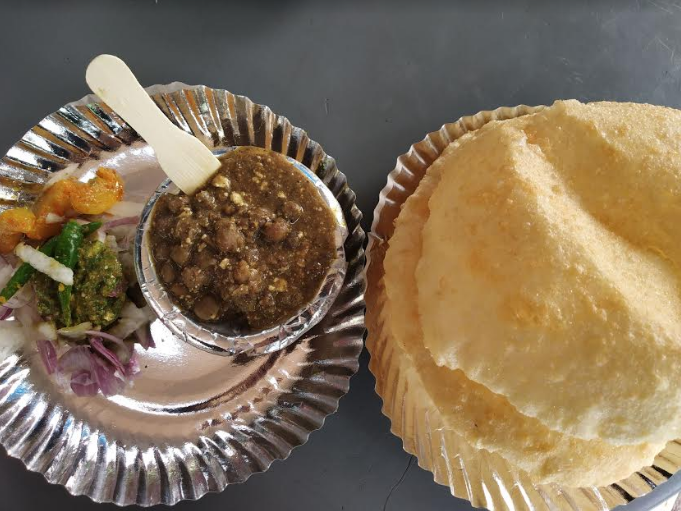 The outlet remains exceptionally busy during the weekend morning hours, with many getting their order packed for home. There’s no place to sit, a couple of tables are all that’s offered to guests to place their plates. But the visitors do not seem to mind as they give all their attention to the plate of choley-bhature in their hands.

Popular with locals and students in Delhi University’s North Campus, Chache di Hatti is located in a lane of the Kamala Nagar market with a board that says ‘Rawalpindi ke chole bhature’, leaving no doubt as to their West Punjabi origin.

Their signature touch is to the bhaturas: a stuffing of spiced boiled potatoes. They also do the usual plain bhatura. Their preparation of choley is on the dry side and not too oily.

The shop is busiest during the afternoon hours when shoppers and students from North Campus make a beeline here for their plate of chola bhatura. They also give the best lassi among all the chole bhature outlets— something not to be missed. 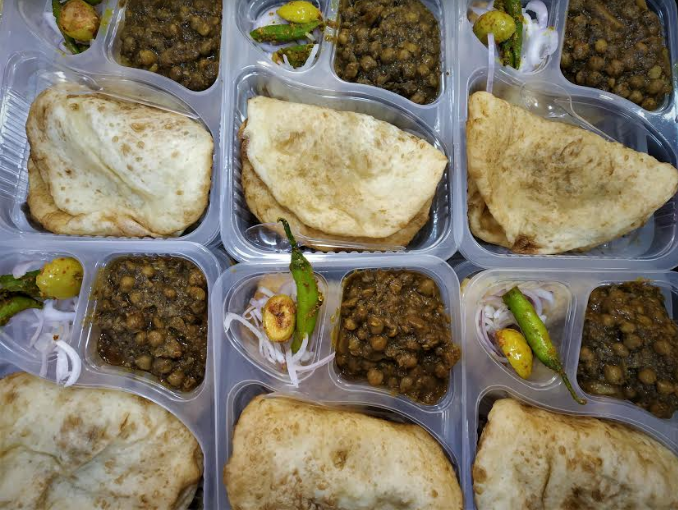 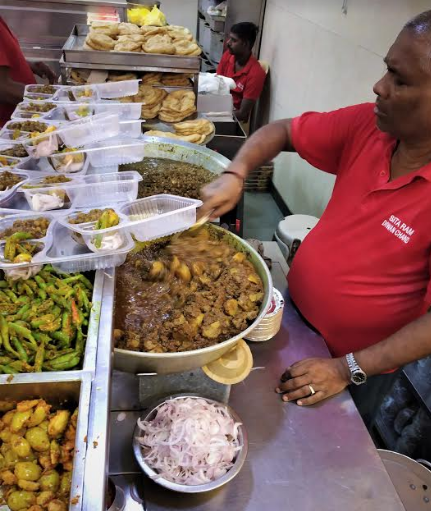 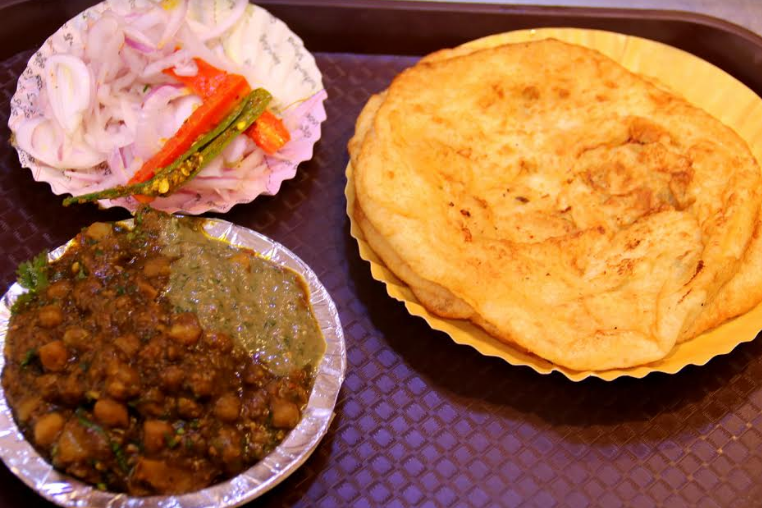