BJP picks up 7 seats along UP border

NEW DELHI: The BJP cemented itself into second place in Delhi’s state politics, retaining 2 of the 3 seats it had held and wresting another 6 from the otherwise triumphant Aam Aadmi Party.

Barring Rohini in northwest Delhi, all the seats won by the BJP straddle the eastern border with Uttar Pradesh.

In Vishwas Nagar, incumbent Om Prakash Sharma increased his victory margin by 60% over last time to defeat a new challenger, Deepak Singla of AAP by 16,457 votes.

Karawal Nagar returned to party veteran Mohan Singh Bisht by 8,223 votes. Bisht held the seat uninterrupted since 1998 except last time, when AAP challenger Kapil Mishra won it by over 44,000 votes. Mishra joined the BJP last year, and lost from Model Town by over 10,000 votes.

Gandhi Nagar and Laxmi Nagar saw a more modest BJP swing. Abhay Verma secured a razor thin victory of 880 votes in Laxmi Nagar over AAP incumbent Nitin Tyagi, who took the seat last time by a margin of nearly 5,000. And Anil Kumar Bajpai won Gandhi Nagar by 6,079 votes. He won the same seat on an AAP ticket last time, by a similar margin.

That brings us closer to New Delhi, where chief minister Arvind Kejriwal saw his victory margin reduced by a third, to 21,697 votes compared with 31,583 in 2015. Kejriwal was facing a new challenger in Sunil Kumar Yadav of the BJP.

What the BJP lost, it lost hard. Mustafabad, also located east along the UP border, was held by Jagdish Pradhan who won it by over 6,000 votes in 2015. Pradhan lost yesterday to AAP’s Haji Yunus, by over 20,000 votes.

Yunus was one of five successful Muslim candidates. All contested from eastern Delhi, all were from AAP. Imran Hussain won a second term from Ballimaran by 36,172 votes, Shoaib Iqbal took Matia Mahal by over 50,000, Okhla incumbent Amanatullah Khan returned with a margin of 71,827 and Seelampur newcomer Abdul Rehman took the seat by 36,920 votes.

Okhla is where Shaheen Bagh stands, and Jamia. Hussain and Khan saw their victory margins increase by about 10% over last time, while Rehman extended AAP’s margin in Seelampur by a third. Will these margins matter to the BJP?

On the subject star campaigner and UP chief minister Yogi Adityanath reportedly addressed election rallies in 14 seats in the national capital, in which he alleged AAP support for a complex of terrorists, traitors, protestors, stone throwers, Pakistanis and biryani eaters. In contrast the BJP has been “feeding them bullets” ever since Narendra Modi became prime minister, he reportedly said in one speech.

Adityanath declared ₹95 lakhs in personal assets and criminal charges of rioting, criminal intimidation, trespassing on burial places and mischief with fire or explosives, and no convictions, to the Election Commission in 2017. Making “Shaheen Bagh” something of an icon in his Delhi campaign, he reportedly addressed rallies in the following seats:

Badli, where AAP’s victory margin declined by one sixth to 29,000

Narela, where its margin shrank to less than half of 40,000

Uttam Nagar, where its margin dropped by a third to 20,000

The BJP came in second wherever it lost. The only exceptions were Burari and Sangam Vihar, where the JD-U stood second, and Seema Puri (the Lok Jan Shakti Party).

Besides Seema Puri, AAP notched up significant victories in all 12 seats reserved for candidates from the Schedule Castes. Its lowest margins were in Bawana at 11,526 votes and Trilokpuri at 12,486 while the highest were Sultanpur Majra at 48,052 votes and Seema Puri at 56,108.

Trilokpuri has seen resurfacing attempts at “communalisation” or the violent expansion of untouchability in recent years.

In nine SC reserved seats AAP’s margins were significantly narrower than in 2015. They held steady in Karol Bagh and increased in Mangolpuri and Seemapuri under incumbents Rekha Birla and Rajendra Pal Gautam.

In his victory tweet and speech, Kejriwal stated that Bharat Mata ki Jai, Inquilab Zindabad, Vande Mataram and Jai Hind, playing with these symbols so as to reduce their power. He said “a new politics begins today” and instead of Jai Shri Ram he proceeded to invoke Hanuman, who helped Ram, to knowing cheers and broad smiles.

Among voters, the starkest polarisation appears between those who support or oppose the central government.

Armed men have fired at unarmed civilians three times in the past few weeks, at protest sites near Jamia Millia Islamia and Shaheen Bagh.

Senior government officials and BJP leaders targeted these protestors a number of times while campaigning, often making explicitly racist statements against Muslims and threatening violence against all manner of protestors.

Mishra was one of the politicians to inaugurate the slogan “Traitors to the nation, shoot the bastards” last December, which Thakur carried forward into the campaign.

Several of these leaders earned restrictions or campaign bans by the Election Commission.

AAP’s “new politics” will have to respond to the ongoing movement, most immediately with unemployment, or the National Population Register, or the Delhi Police.

Early in January Kejriwal told the press that the Citizenship Amendment Act should be rejected as it was unnecessary and harmful to both Hindus and Muslims. He said, “The text of the Bill says it will only shield only Hindus coming from Pakistan. All the Hindus sitting here must arrange identity proofs of themselves and their parents.”

AAP’s municipal response to the ongoing movement will determine, ironically, the future national face of the capital manager castes: Congress, Left or BJP? 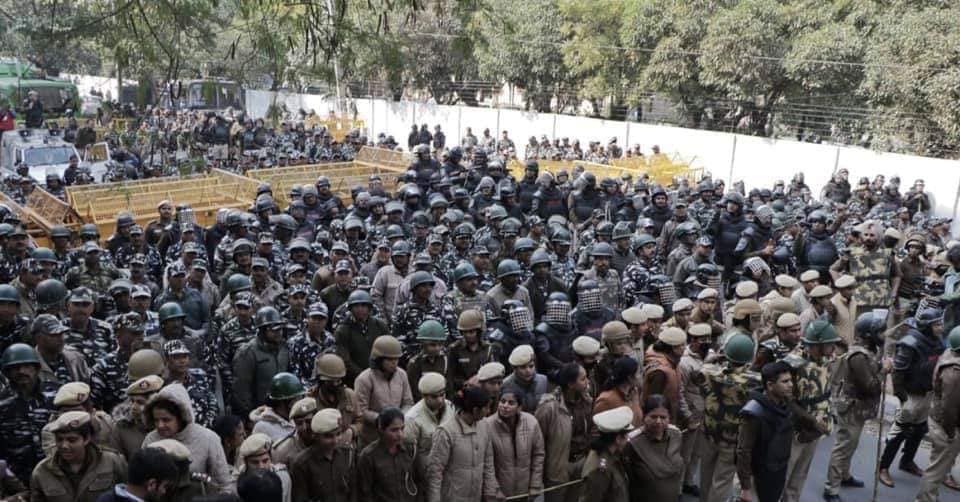 Outside Jamia Millia Islamia on Monday. Students accused police of beating and molesting them and dousing them with a “toxic chemical spray”. Several were hospitalised. Image: Pinjra Tod / Facebook

“After hearing all sides’ testimony all five judges of the SC delivered a unanimous verdict today. We welcome the SC’s decision. The SC gave its verdict today on many decades of dispute. An age old dispute is now ended. I appeal to everyone to remain peaceful and amicable.” 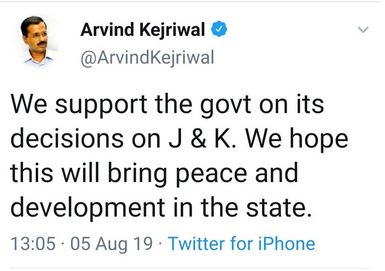