All political parties will try to restore peace, CM says

NEW DELHI: The violence that erupted in Delhi on Sunday continues. Reports suggest the rioters have claimed at least nine lives so far, injuring dozens of others, including civilians and police and paramilitary personnel.

Chief minister Arvind Kejriwal called an “urgent meeting” of all AAP MLAs from the targeted areas today, almost 48 hours after the violence first began. He told the press afterwards that “all political parties” would attempt to restore peace in Delhi. He said the army would be called in if required, though for the moment the police was handling the situation.

According to reports the petitioners allege that “anti-social elements from surrounding villages of UP have entered Delhi in buses and trucks and have been attacking residents of Delhi and peaceful protests” and have asked the apex court to direct the Delhi Police to register FIRs on complaints made “in respect of the attacks that started on 23.2.2020” and escalated through the next day.

Meanwhile, the Delhi High Court will be hearing pleas tomorrow for an SIT probe and a directive to call in the army to restore peace.

Sunday, February 23 around 4pm: Many allege that the riots, which have today entered their third day, began in reaction to BJP leader Kapil Mishra’s “ultimatum” to the Delhi Police to clear anti-CAA protestors from the Jaffrabad area within three days. Mishra made this statement on Sunday afternoon with a heavily armoured police officer standing beside him. “The DCP is with us,” Mishra said, before proceeding to deliver his warning. After three days, he said, “we will have to take to the streets”.

Earlier, close to 500 individuals had gathered near the Jaffrabad Metro Station to hold a protest against the Citizenship (Amendment) Act, blocking a portion of the road near the metro station. The Bhim Army had also called for a nationwide shutdown. Early on Sunday, police officials asked the protestors to clear the area to prevent traffic disruptions. While the Jaffrabad protest was on, Mishra reached nearby Maujpur to hold a pro-CAA rally. The video that went viral was of his speech at this rally.

After 4 pm: Following Mishra’s speech, clashes break out near Jaffrabad. News emerges of stone pelting at a pro-CAA rally in Maujpur. The police reportedly lathicharges protestors and fires teargas shells after further clashes in Karawal Nagar, Babarpur and Chand Bagh.

9-11 pm: Clashes begin anew after a brief period of calm, as reported by India Today. Reports emerge of mobs destroying shops and homes, targeting Muslims and Muslim property and businesses.

Around 1 pm: Alok Kumar, joint commissioner of the Delhi Police (eastern range) states that four cases have been registered regarding the violence on February 23.

2.30 - 4 pm: A petrol pump is set on fire in Bhajanpura. Meanwhile, mobs torch vehicles and vandalise homes here and in nearby localities, seeming from many accounts to target Muslims. Around 3 pm the police reportedly “remove” protestors from the Maujpur area. However, stone pelting and arson continue through the evening in the Jaffrabad, Bhajanpura and Karawal Nagar areas.

Around 3pm: A 33-year-old man, later identified as Shahrukh by the police, reportedly opens fire during clashes in Jaffrabad. Videos emerge of the man holding a gun and advancing towards an unarmed Delhi Police officer, firing into the air and forcing him to back away. Police later detain the attacker and say he fired eight rounds.

Around 3:30 pm: In a tweet, Kejriwal urges Shah and Baijal to “restore law and order” and ensure “that peace and harmony are maintained”.

After 4 pm: Section 144 prohibiting unlawful assembly is imposed in ten locations in northeast Delhi. PTI reports that a head constable, Ratan Lal, attached to the office of the Gokulpuri assistant commissioner of police is killed, succumbing to injuries from stone pelting. Shahdara DCP Amit Sharma is also injured and hospitalised, according to reports.

By evening, reports emerged of at least four other deaths (three civilians) and at least 50 injured. A tyre market at Gokulpuri is also set ablaze.

The Times of India reports unnamed government sources stating that the violence in Delhi appears to be “orchestrated so that those involved in it get wide publicity as US President Donald Trump is currently visiting India”.

8 pm: Towards the end of the second successive day of violence, Shah calls an urgent meeting with top Delhi officials to review the law and order situation, and reportedly orders them to restore normalcy at the earliest.

8:30 pm: After video he posted of his ultimatum goes viral, former AAP MLA Kapil Mishra, now with the BJP, takes toTwitter yet again, this time to appeal for peace. “I appeal to everyone to stop violence as it will not lead to any solution. Whether it is people who are supporting CAA or those who are against it, I appeal everyone to maintain peace. Delhi's brotherhood should remain intact,” he tweets.

Tuesday, February 25: In the morning seven people are reported dead as a result of the violence in northeast Delhi. The deceased include head constable Ratan Lal, civilians Shahid, Mohummad Furkan, Rahul Solanki, Nazim, and two other unidentified persons.

Reports of arson and stone pelting emerge for the third day in Maujpur Chowk. News18 reports that rioters entered and ransacked a bakery in Maujpur. Reports of shops, vehicles and offices being set ablaze in the area.

According to media reports 160 people with gunshot injuries were transported to the Guru Teg Bahadur hospital in Dilshad Garden late last night. The police and Rapid Action Force held a flag march in Brahmpuri after incidents of stone pelting this morning.

GTB Hospital authorities told PTI that the death toll rose to nine on Tuesday, with four people declared brought dead by doctors at the hospital on Tuesday and 35 injured people also brought in so far today.

The Human Rights Law Network has moved a plea in the Delhi High Court seeking an independent judicial enquiry and compensation for all those killed in the riots. The plea also asks for the arrest of certain political leaders whose “hate speech incited public for violence” according to reports.

The Delhi Police stated today that the situation in the capital remains tense, with the police receiving continuous calls about incidents of violence in the northeast. According to ANI, Commissioner of Police Amulya Patnaik held a meeting last night at the Seelampur DCP’s office to assess the situation.

The Fire Director, Northeast Delhi told the press that the fire department had received 45 fire calls till 3 am last night. Three firemen were reportedly injured and a fire tender was set ablaze.

After around 48 hours since the violence began, Delhi CM Arvind Kejriwal called an urgent meeting with AAP MLAs and other officials from the targeted areas at his residence today at 10.30 am.

After the meeting Kejriwal addressed a press conference stating, “I appeal to all to maintain peace and calm. One policemen and some civilians were killed; these are our people, belonging to Delhi. We cannot let this spread. It will affect all of us.”

He further stated that “people were entering from borders” and these would have to be sealed. He also urged people living near religious institutions to maintain peace, further stating that the police deployment was inadequate.

As per reports, the chief minister will be meeting with those injured in the clashes today, even as violence and rioting continues.

(The Citizen could not independently confirm the authenticity of these videos.) 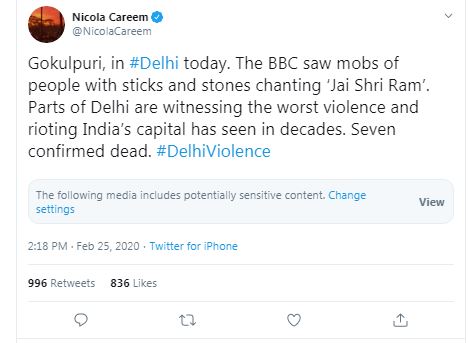