Delhi Violence: 'Didi, When Will the Ambulance Come?'

On the spot in Northeast Delhi

What do you do as a journalist when you see your house burning, your own people being killed or hurt? The helplessness of seeing your city burning to the ground will continue to haunt me. It was a sombre Tuesday morning when I made my way towards Guru Teg Bahadur Hospital.

On reaching the hospital all I could see was chaos and fear. Ambulances were on the go and injured bodies were rushed to the emergency ward. As the roads were closed, me and two colleagues were given a lift by an ambulance that was on its way to pick upinjured people.

That ambulance journey on Tuesday morning - all of 7, maybe 10, minutes long - paved a view to something I could have never imagined.

Groups of people were standing on the roads. They had sticks and iron rods in their hands. Through the window, we could see them chanting something.

As the ambulance passed by, none of them, thankfully, tried to stop it. Our destination was a tire market in the Gokulpuri area which had been set on fire.

Owned by a majority Muslim population, the tire and iron shop was burning to ash. Thick black smoke was high up in the air. It was so intense that the sun was hidden behind the smoke. Outside the shop, a few men stood by, helpless. On the other side, there were men blocking the road and restricting movement. 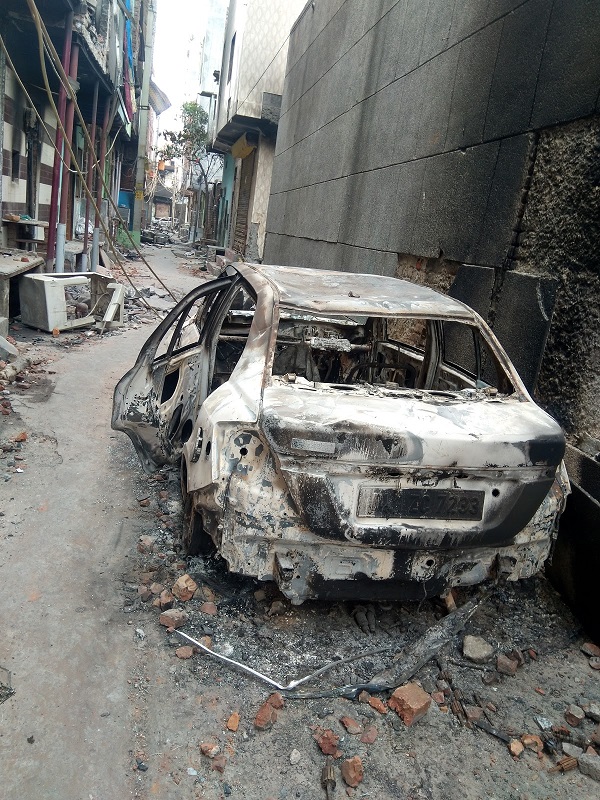 A group of people had gathered, observing the destruction of the market. "Let it burn," said a man, who was standing behind me. "This will teach them a lesson.”

Three policemen stood outside the gates of the market. They were looking at the thick fire, which had consumed almost the entire market. We asked them why there wasn’t a fire brigade; the police officer had nothing to say. We asked: Where was the police in such volatile times? A police constable turned to his partner and said, "Everyone is welcoming Trump." He started laughing but his partner shushed him, a look of panic on his face. "Are you crazy?" he said.

For about three hours that we stood there trying to understand what was happening, many fire brigades crossed the road -- only to reach some other areas. In the middle of the chaos, we had to hide in a DTC bus as a group of people with sticks in their hands and carrying a saffron flag, strode through the roads. "Call more people," I heard one of them say.

When the fire brigade finally arrived, a group of men gathered around it. They vocally criticised the media, which had - by this point - started coming in. "One of our constables died and they [the media] don't care. Look at them obsessing over a market. They should let it burn. Why is the fire brigade even here?" one of the men said. 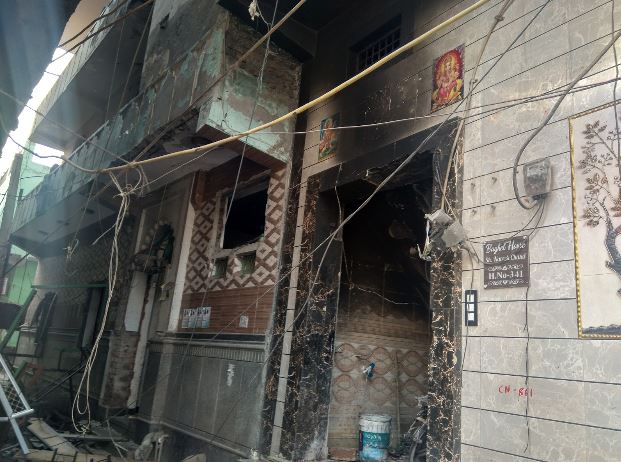 Just as the fire brigade began dousing the fire, we heard gunshots from across the road. This was where the area of Babarpur started, where Bhim Rao Ambedkar College is located. As we rushed towards that area, staff stuck inside the college warned us not to go any further.

"Do you want to die? What are you doing? There is a danga going on. Go back," said one man.

We walked further in. A car stopped; inside was a man, visibly panicked. "Where are you going?" he asked. We pointed towards the area, where a group of people were visible running here and there. Beyond, a wall blocked our view, but we could hear gunshots. "Don't go back there. It's a riot. They are shooting and beating up anyone who crosses them," he said. When I and a colleague continued walking in that direction, he started shouting: "Don't you understand what's happening? Go back right now.”

My colleague calmed him down and asked him to leave. Now a man standing next to his broken car asked us: "Madam, are you students?" But suddenly we heard more gunshots. We were in an area where people parked their cars and trucks.

Before we could understand what was happening, we saw two groups throwing stones at each other. At one point, the mob started coming towards our direction, and we ran to the other side. Just then, we heard another gunshot, and stone pelting resumed.

Two men wearing skull caps very nervously entered the parking area. Their truck was standing in the area and they wanted to check whether it was fine. The caretaker, who was Hindu, assured them that it was safe for them to keep their truck here.

The father and the son duo nodded. On asking what was happening, Mohammed Karim said, "Since Sunday night there has been a hostile environment. A violent mob suddenly entered our streets. We saw some police officials with them. They had sticks and swords with them," he said.

"Everyone is very scared. We had to bring a few relatives from Gokulpuri as some people threatened to kill them," Naved, his son, told us.

Gokulpuri is a Gujjar majority village. You could feel the hostility. People were on edge and questioning any and all outsiders. The few Muslim families that lived in the area shifted to their relatives houses in different areas.

Naved's family lives in Kardam Puri. The narrow lanes here were overflowing with people, as everyone left their homes to tend to the injured; it was chaos. Many people were injured, and loud wails could be heard everywhere.

People were visibly scared. Before we could understand what was happening, a group of young men told us that a mob from the other side was pelting stones. "We had no choice but to retaliate but we can't do it anymore. So many people have been hurt. A lot of people have been shot," one of them said, sweaty and harassed.

All the young men in the area said no media had come here and even as they have been calling 100 or 102, no help had come. 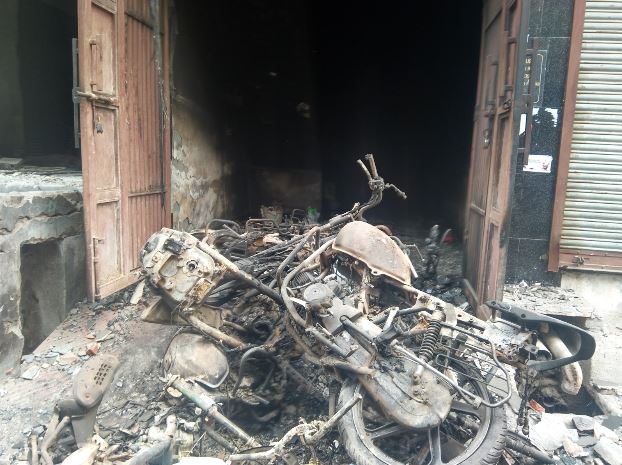 Just then, a woman came up to us, sobbing. She could barely breathe. While a man was narrating his ordeal of how his house has been burnt down, she somehow managed to breathe and say, "my grandson has been shot."

Before anyone could realise what was happening, chaos again erupted. 'He has been shot?'

'Yeah by goons in the morning'

'But he went to the doctor?'

'No, the ambulance is not coming to this area. They are saying it's dangerous. We have been calling them since the morning.'

The grandmother was crying, she looked around helplessly. I asked her to show us the house. We managed to reach her small house. On the bed lay a teenager of about 14. He was lying on his stomach. I crouched down and asked him what had happened?

He looked dazed and somehow managed to speak, "Didi, I had gone out with friends. We went to a shop when we heard gunshots. Everyone started running. I did too, but fell down. When I got up, I had intense pain in my lower back and fainted."

Faizan, was shot in the lower back. His mother died while giving birth to him and his father is physically not fit and lives in Uttar Pradesh. His grandmother helped him grow up and takes care of him. The woman also has a daughter who is almost nine months pregnant.

Faizan had to fight death. He was turning pale yellow and even when we tried to call an ambulance, we got no response. Faizan held my hand and barely audible, whispered: “when will the ambulance come?”

Helplessness took over. We could hear Faizan's breath get slower. Everyone was panicking. The RAF and police refused to give any help. We begged, we shouted but nothing worked.

Suddenly, a PCR call went through and after about an hour or so a police jeep came. Faizan was laid down on the seat, his body was getting cold. His grandmother and nine month pregnant aunt went in next.

I also managed to climb in the car. The jeep was rushed through and as we passed through deserted lanes, we could see mobs with sticks and stones. We somehow managed to reach Guru Teg Bahadur Hospital. The bullet had hit Faizan's lower back, bursting his nerves and narrowly missing his bones.

After two operations, Faizan is now fine. He was one of the lucky ones. The room where he is admitted to is filled with injured people. The scenario is horrific. 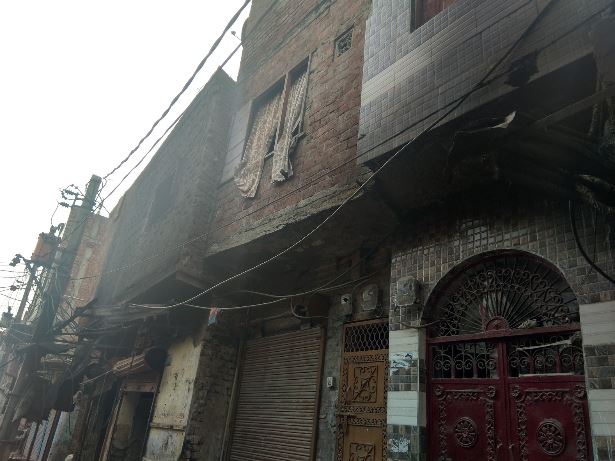 About 43 people have died in the mob violence. People's houses and shops have been reduced to ashes. Numerous mosques have been burnt down. North-East Delhi is now witness to one of the worst riots in Delhi. Every street, house or person has a story to tell.

Both Hindus and Muslims have suffered. Although the majority of the violence was targeted toward the latter, there is no comparison to the value of human lives lost; both sides have suffered.

Since Tuesday, I have been going to North-East Delhi and the destruction that people witnessed is unbelievable.

The communal violence in Delhi’s North-east was planned; it did not happen suddenly or spontaneously. People were targeted, houses were specifically targeted and attacked. And another certainty is that the police and government authorities failed to do their job.

For me, it was like seeing my own house burnt down, looking at the dead bodies of my own people. I’m from Delhi, and have grown up here. These roads with their shops and people are familiar sights - now completely destroyed. I cannot describe the heart ache.

A mob has no face, it has no religion. A mob comes to destroy everything that it crosses. What Delhi witnessed was a ticking bomb that burst. People here - from both communities - still cannot digest what happened, as they have lived together in peace. For now, what remains are memories of the better times and the trauma of violence.

Outside GTB Hospital's mortuary, grieving families are still waiting for the bodies of their loved ones. Mohammed Chotu has been waiting for the body of his older brother who was charred to death inside their house. What remains of him are his legs, through which they were able to identify the body.

The family is yet to get the remaining body. "I just want this to get over," said Chotu, holding his head in his hands.

On the other side, Dilbag Singh's family has been waiting for their son's body. It has been five days.