NEW DELHI: Kerala Chief Minister Pinarayi Vijayan announced a Rs. 20,000 crore financial package to deal with the impact of the coronavirus outbreak, with Rs. 500 crore for health initiatives and Rs. 2000 crore for loans and free ration. The announcement came on the same day as Prime Minister Narendra Modi’s address to the nation, which was met with some criticism as the PM called for a ‘janata curfew’ and social distancing without expected stimulus packages.

Kerala's financial package, meanwhile, was applauded by many on social media - with users calling for other states and the centre to follow suit, as the number of cases testing positive for Covid-19 continues to rise across the country. Kerala is the second worst-hit state in India, with 27 positive cases.

“Our state is facing a big crisis, normal life has been hit by this pandemic,” Vijayan said. “It has wreaked havoc on our economy and to revive the economy, we are announcing a Rs 20,000 crore package.”

Additionally, loans worth Rs. 2000 crore will be disbursed to families in need. Social security pensions that were scheduled for April will be advanced, and distributed this month itself to about 50 lakh people across the state. Those who do not receive any such pension, will be given Rs. 1000 each.

Residents will be given an extra month to clear dues such as water and electricity bills; movie theatres will get entertainment tax waivers; auto rickshaw fees will be relaxed; stage carriage and contract carriage in buses will be tax-deductible and given a one month exemption for three months tax - amongst other measures.

The announcement makes Kerala the first state in India to put forth a financial package, as the closures and restrictions across the country lead to an economic slowdown. Such packages have been announced at a central level by several coronavirus-affected countries across the world: The US, for instance, unveiled a $1 trillion USD economic stimulus package to deal with the crisis; Canada announced $82bn in aid and tax deferrals; Britain unveiled a £330bn package of emergency loan guarantees to business and £20bn of fiscal support; and France suspended the collection of taxes, duties and rent while announcing a €45bn rescue package.

Kerela’s response is in part, determined by the experience tackling the deadly Nipah outbreak in the state two years ago. Kerala was quick to declare coronavirus "a state calamity" - doing so in February itself, when three people tested positive. Isolation measures, quarantine, and testing facilities were quickly put in action - as the state braced for what lay ahead.

The value of social distancing was realised early on; robots were brought in to distribute masks, and spread information. Asimov Robotics founder Jayakrishnan T told tech website Inc42 that the company has deployed two robots at a business centre in Kochi. One robot provides information, while the other hands out hand sanitisers.

“The purpose of these robots is to spread awareness about coronavirus and help people adopt healthy practices to keep themselves safe amid the outbreak. They seem to be attractive and provide information which can be trusted by people,” Jayakrishnan told Inc42.

Tech has been a significant player in the state government’s response, with the government launching an app called GoK – Direct Kerala, which provides information and news updates relating to the virus. A similar initiative had been put in place during the Nipah outbreak.

Additionally, after Kerala shut down anganwadis following the outbreak, mid day meals were delivered to people's homes - as 26000 children under the mid-day meal scheme of 33115 anganwadi centres were affected by the closure.

Other measures taken by the state include delivering books to those placed in isolation and quarantine at the Government Medical College Hospital near Kochi. And Chief Minister Vijayan tweeted earlier that the government was tackling the shortage of masks in the state with a novel solution: roping in convicts in state prisons to manufacture masks. 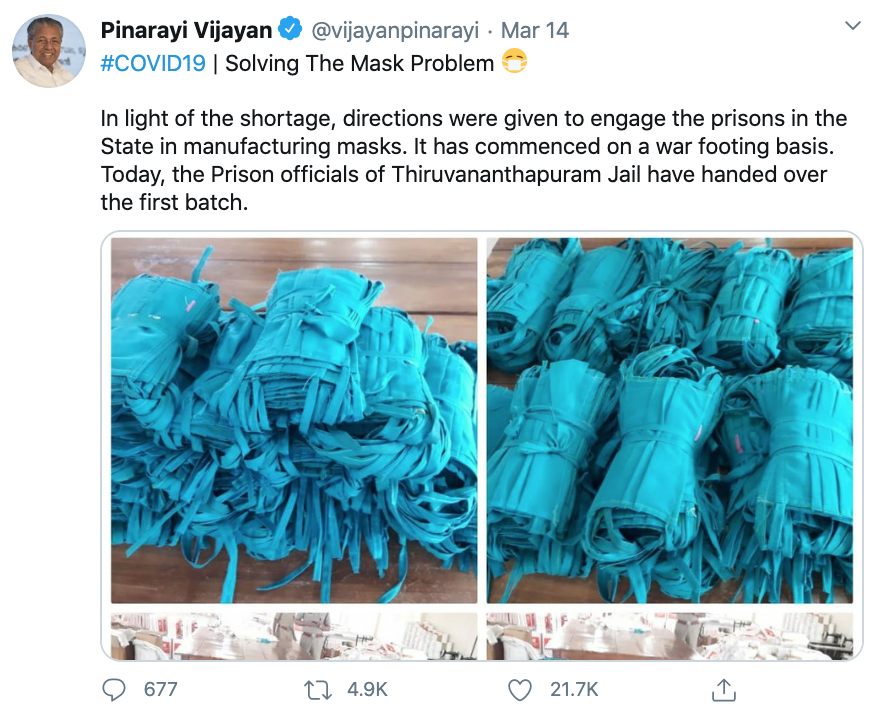