A series of online updates reportedly posted on Facebook on April 3 by Tagam Mibang, the Extra Assistant Commissioner of Rumgong in Siang district, read that ‘beating utensils’ and turning off lights will not help in controlling the spread of COVID-19.

The pandemic has so far claimed 244 lives, as the numbers of those infected continue to rise.

Modi had given a call to citizens to switch off their lights on the evening of April 5 for nine minutes and instead use candles to “challenge the darkness” of the outbreak. This came after his earlier call for clapping to show solidarity with healthcare workers turned into a nationwide utensil-banging event.

These appeals have been mocked and made memes of from a cross-section of people, including at least one state government official in Arunachal Pradesh.

“Respected Feku Modiji, please talk about medicinal cure, creative healing procedures whether conventional or alternate medicine. You're not running a rock concert but, fighting against a killer pandemic. And if you're running short of ideas, you're welcome to seek my expert advice. That was another piece of habitual self-advertisement or Hindu-fication at the time of a pandemic? (sic),” one post read.

In one update, Mibang wrote that turning off lights for nine minutes is “Feku Modiji's latest prescription for coronavirus”.

“To him, electricity light and those from torch light, mobiles are different (sic),” he wrote, and that “this new procedure deserve to be exported immediately”.

The officer also said that the disease will continue to spread even after the end of the 21-day lockdown period and that “intelligent, crucial actions and not comical dramas” is needed.

However, his appeals have not gone down well with his seniors in the state bureaucracy.

The state government’s secretary to the personnel department sent Mibang a notice to explain why he should not be subjected to disciplinary action.

The notice said that Mibang had “posted objectionable write-ups in various social media using derogatory language... which is unbecoming of a government officer”.

Referring to one of his posts, the notice said that his condemning of the prime minister’s announcement is a violation of Section 3 of the Central Civil Services (Conduct) Rules.

The notice is dated the same day that the posts were reportedly made, and Mibang has been given 15 days since it was issued to explain his actions. 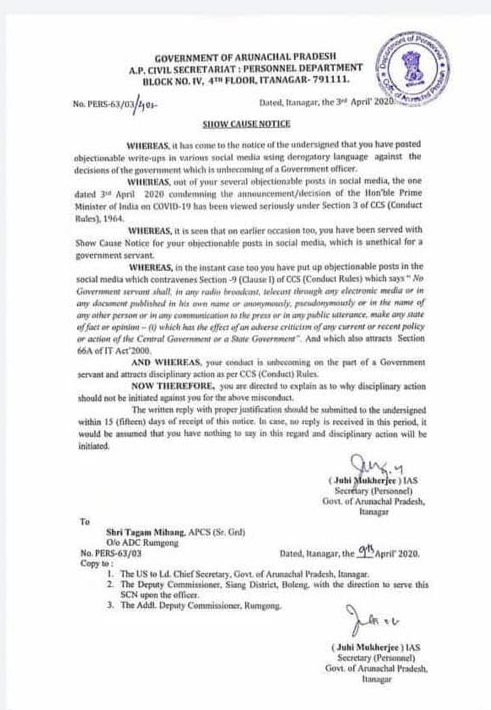 The officer, however, has landed in trouble before after he had claimed to have a cure for the virus and that he had tested it on himself.

But he does not seem unduly concerned carrying the following FB post after being served the notice: