NEW DELHI: On March 28, around eleven in the morning, Shravan Kumar hastily closes the main door while heading out of the building. Before his landlady can ask him where he’s headed and whether he will return tonight. “Gaon ja raha hun, Aunty” he says (I’m heading to my village) vanishing onto the already emptied streets.

But by 10 pm he had returned. He stood at the main door, knocking, visibly more exhausted than on other days. A migrant labourer earning a daily wage, Kumar had tried to walk 632 kilometres home from this megacity to his family in a small village near Rae Bareli, in the countryside of Uttar Pradesh.

Like untold others, he tried to make the journey home after the prime minister, Narendra Modi, on March 25 announced that the central government would impose a lockdown for the next 21 days, giving everyone just hours to prepare. Modi assured the public that access to food and essential items would remain open, without explaining how.

Already rumours of police action and the prime minister’s impending address had sparked off a panic waiting to happen.

The unprecedented and unplanned lockdown, with even state governments seemingly kept in the dark, is wreaking havoc in a country where 8 out of 10 people live on less than $2 a day.

Kumar, along with 18 fellow labourers from the same village, wanted to return home. They decided to head together to the Anand Vihar bus terminal, 20 minutes east of Parliament.

They could not know that interstate borders had been sealed. The Delhi government had already suspended public transport. Police were enforcing the lockdown. They made towards the bus terminal on foot.

Policemen confronted them enroute. “Ya toh jail jao ya ghar!” (Go to jail or go back home!). After a full day’s struggle Kumar was forced to return.

Next day, a video started doing the rounds. State government officials were hosing down migrant labourers with sodium hypochlorite or bleach. The men manning the hoses wore full protective gear. This was at a checkpoint in Bareilly, near Shravan Kumar’s village in UP.

Many other parts of the country have witnessed similar confrontation. In just the first few days of the “migrant worker exodus” at least 22 people including six children reportedly died of exhaustion, hunger, heart attacks and being run over by cars.

Kumar is in his early twenties; he is one of hundreds of millions of Indians who must earn each day simply to buy food to eat, and have no savings to fall back on. 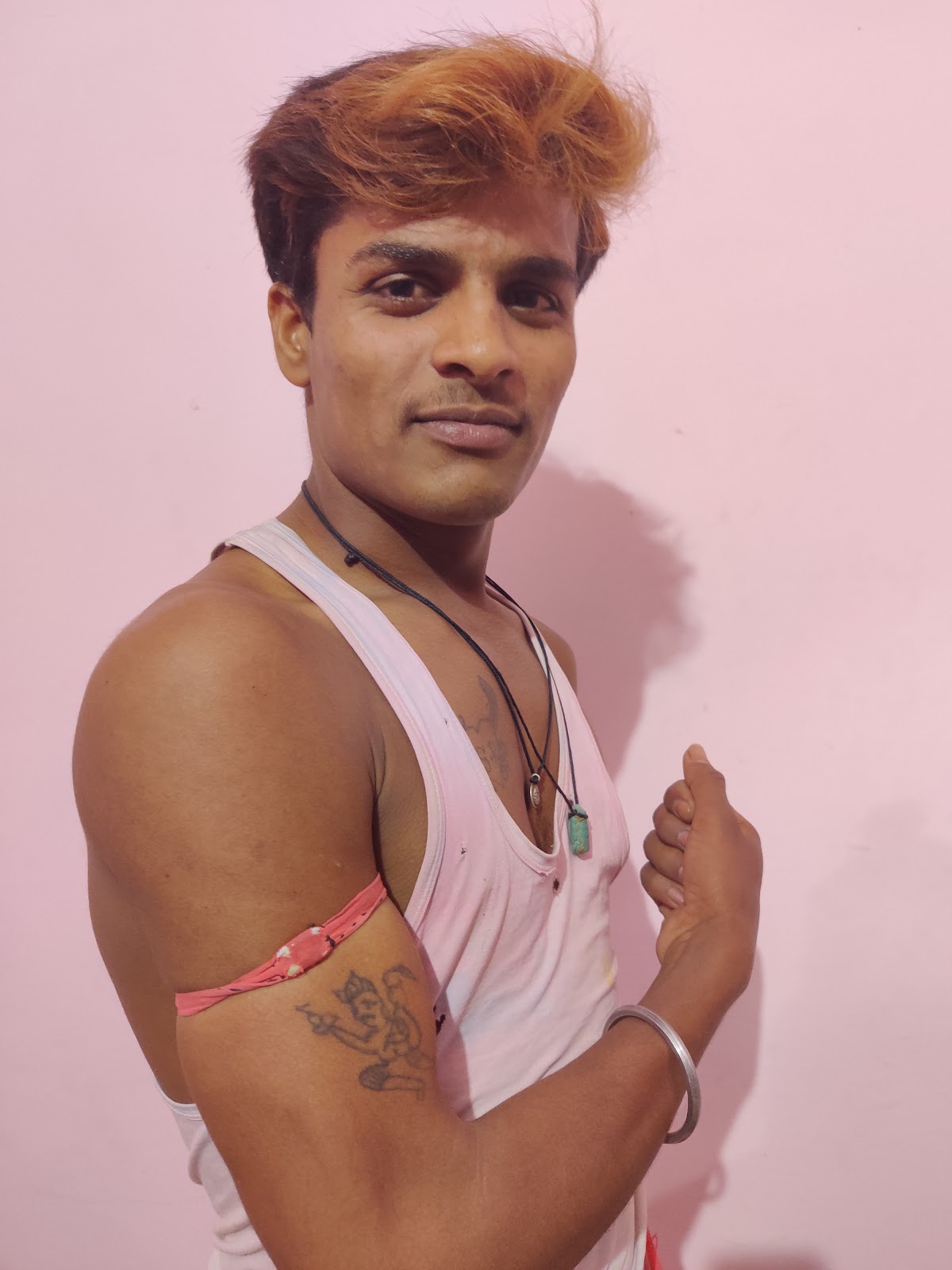 He sits in a small room with dull peach walls. He shares it with two other labourers who rent it together paying ₹2,800 every month. His work as a mistri (bricklayer) earns him ₹400 per day.

“Karoda can’t do anything to me,” he says, referring to the novel coronavirus.

He cannot read or write. He doesn’t have access to a smartphone and from what he has been able to gather he believes Karoda is a disease that spreads from a person’s touch.

He has no way of knowing that India has registered more than 9,000 cases of Covid-19 and recorded 331 deaths. Despite a lockdown that has caused widespread hunger and distress, and despite severely limited testing, the country is recording hundreds of new cases every day. The rate is climbing.

On multiple occasions during our conversation, Kumar talks of Karoda as if it’s a living enemy, something tangible — that if he could see it, he would definitely beat it up. And why not? After all, it’s because of this thing that he has no work, is running out of money, and will soon be short of food.

He cannot pay his rent. And worst of all, he says, he hasn’t been able to send any money back to his family, their only source of sustenance back in his village.

“My mother calls me up and cries. Sometimes I cry too, but only on the inside.” His desperation to return home is evident in his voice which craves security and survival.

He says the cost of vegetables, cooking oil, wheatflour has been driven up to unprecedented rates. “Everything has become expensive and out of reach. Things will get worse. We will die of hunger before Karoda kills us,” he says, an assessment shared by many across India’s villages and cities.

He no longer believes he can sustain himself here, in a city that has been hosting him for six years now, in return for his rent and labour. If things are to get worse, the least he wants is to be home with his mother and brother. “With my family.”

Flaunting a heart-shaped tattoo on his chest with the letters S and R entwined, Shravan Kumar reveals that his marriage had been fixed for May 15. But now like so many others he is absolutely uncertain about what will happen next.

With the lockdown set to continue, he says, “I swear on my god, I will, somehow, anyhow, head back to my village, to my family. Then it won’t even matter if they put me in jail, or if I have to cover the entire route on foot.”

Like him the many millions who live in small huts on dusty construction sites, sleep in the rickshas they drive, share cramped rooms and are paid only their daily bread, have been left wondering which corner of this huge and emptied city was meant for them.

The virus doesn’t scare them as much as the thought of every day.

What will we eat? How will I feed my family? 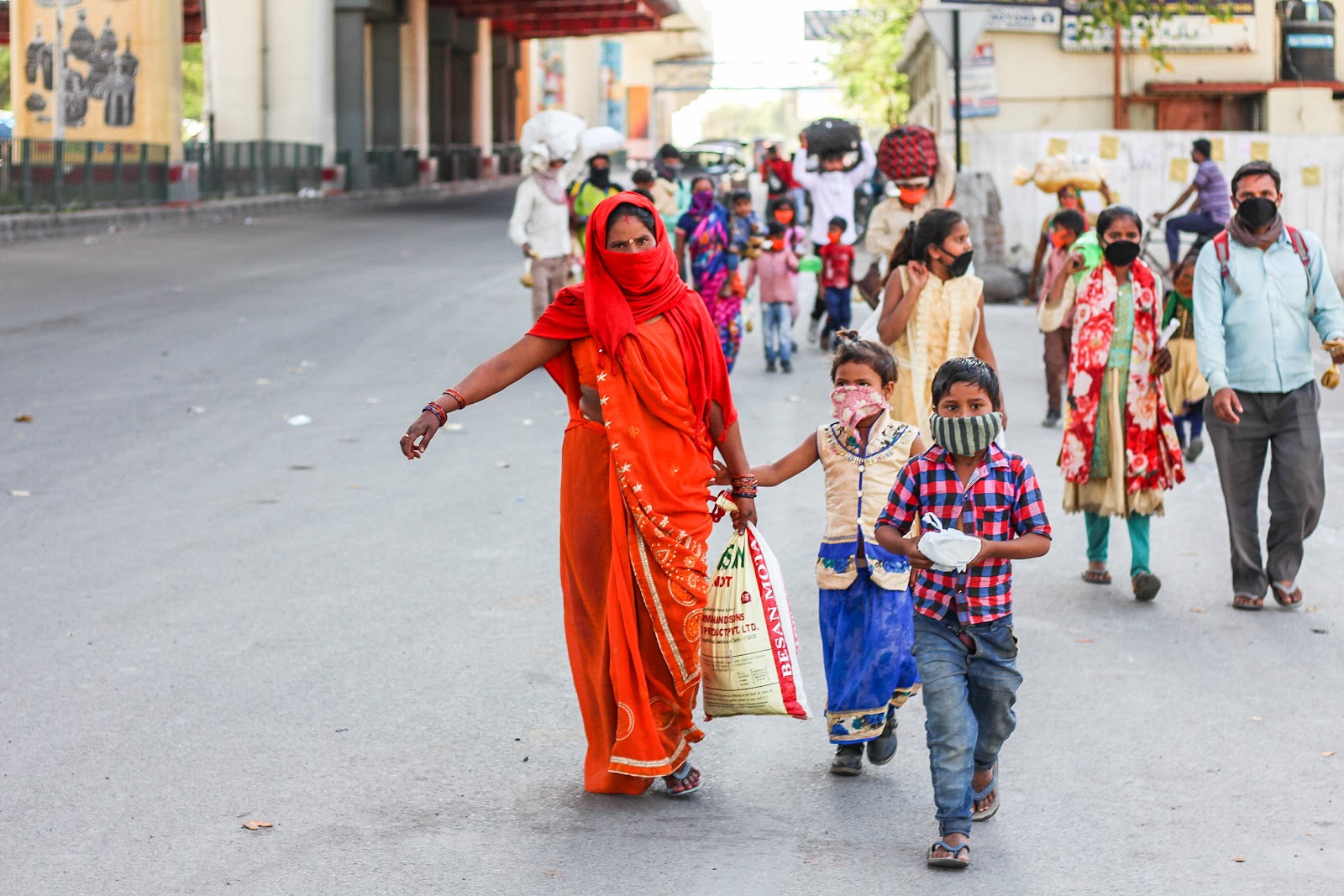 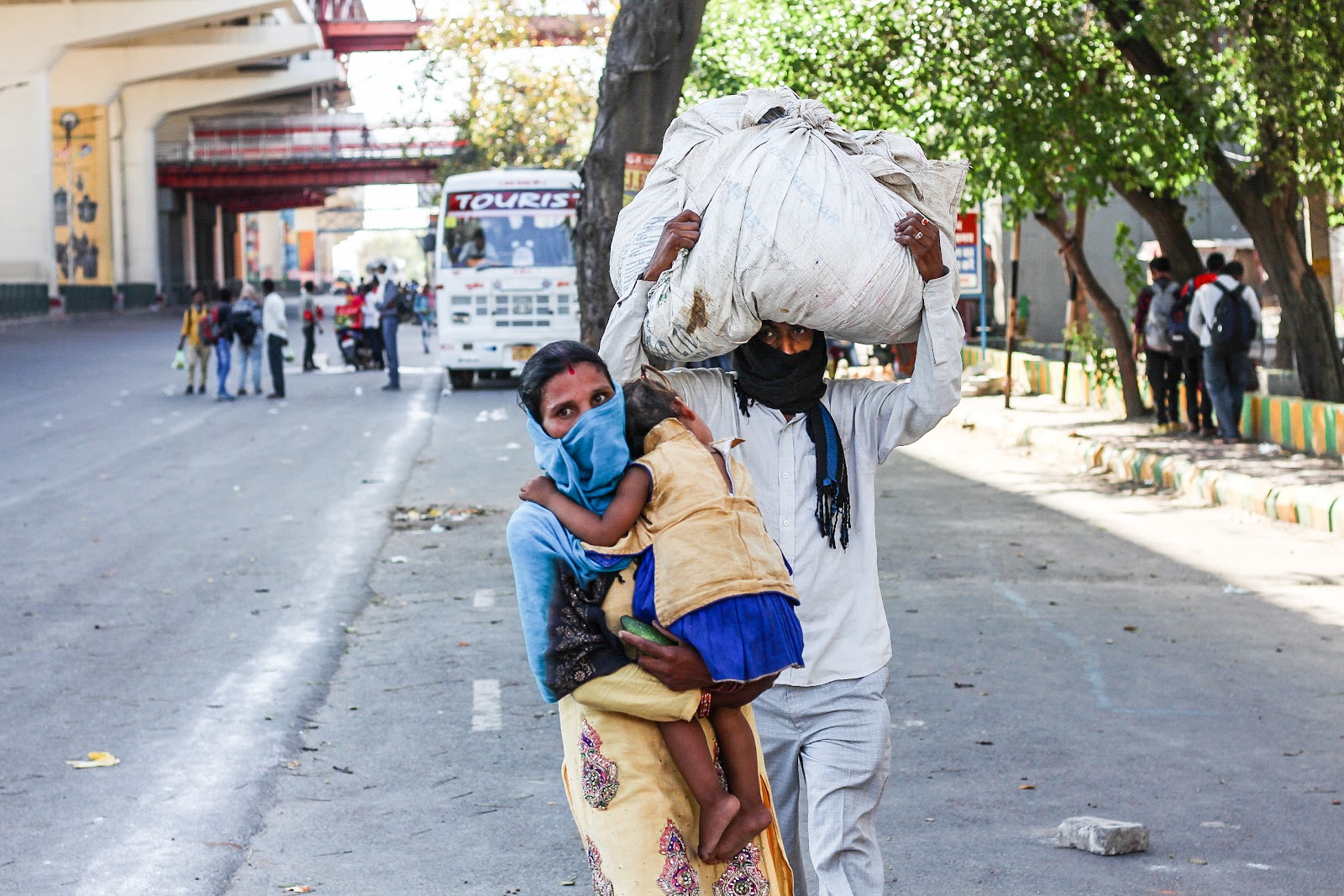 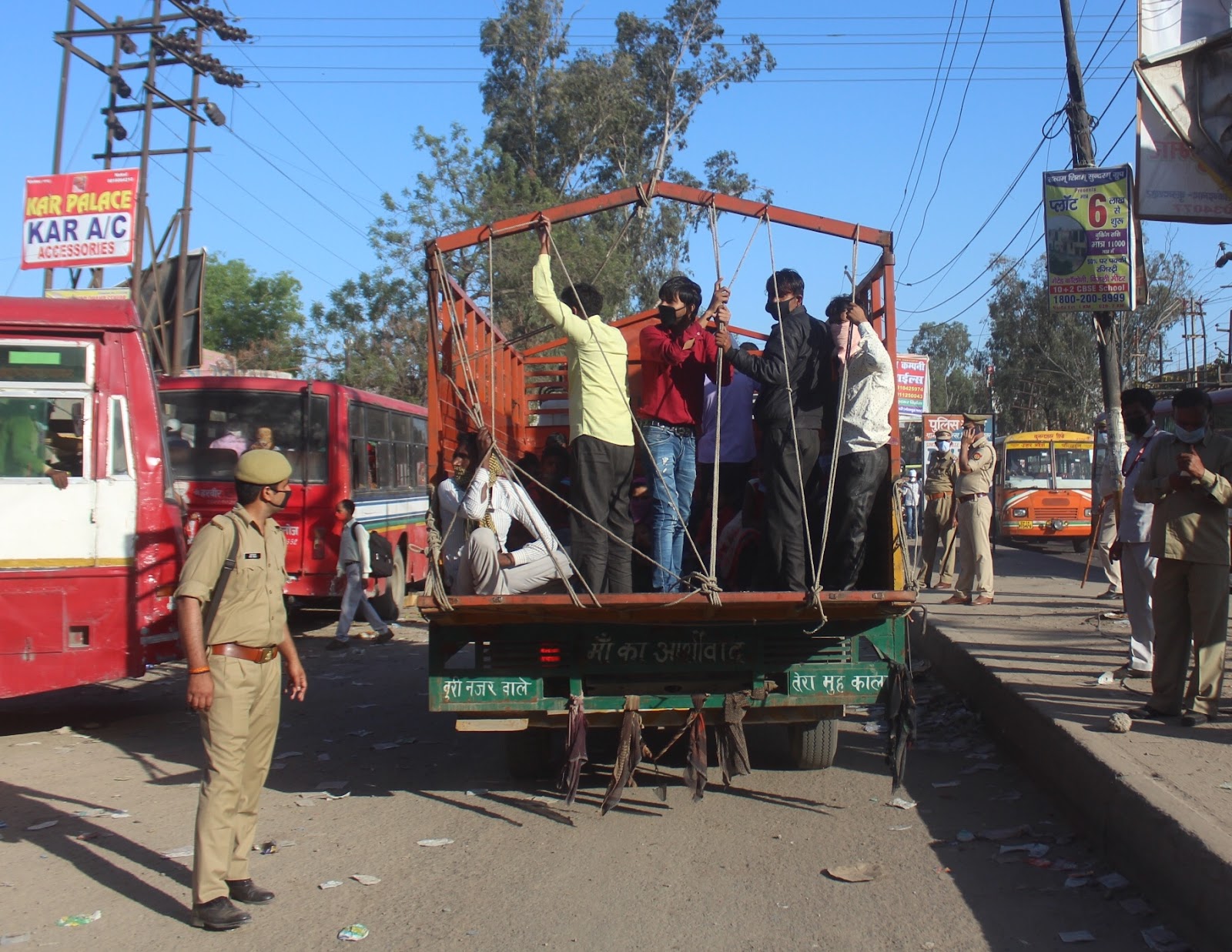 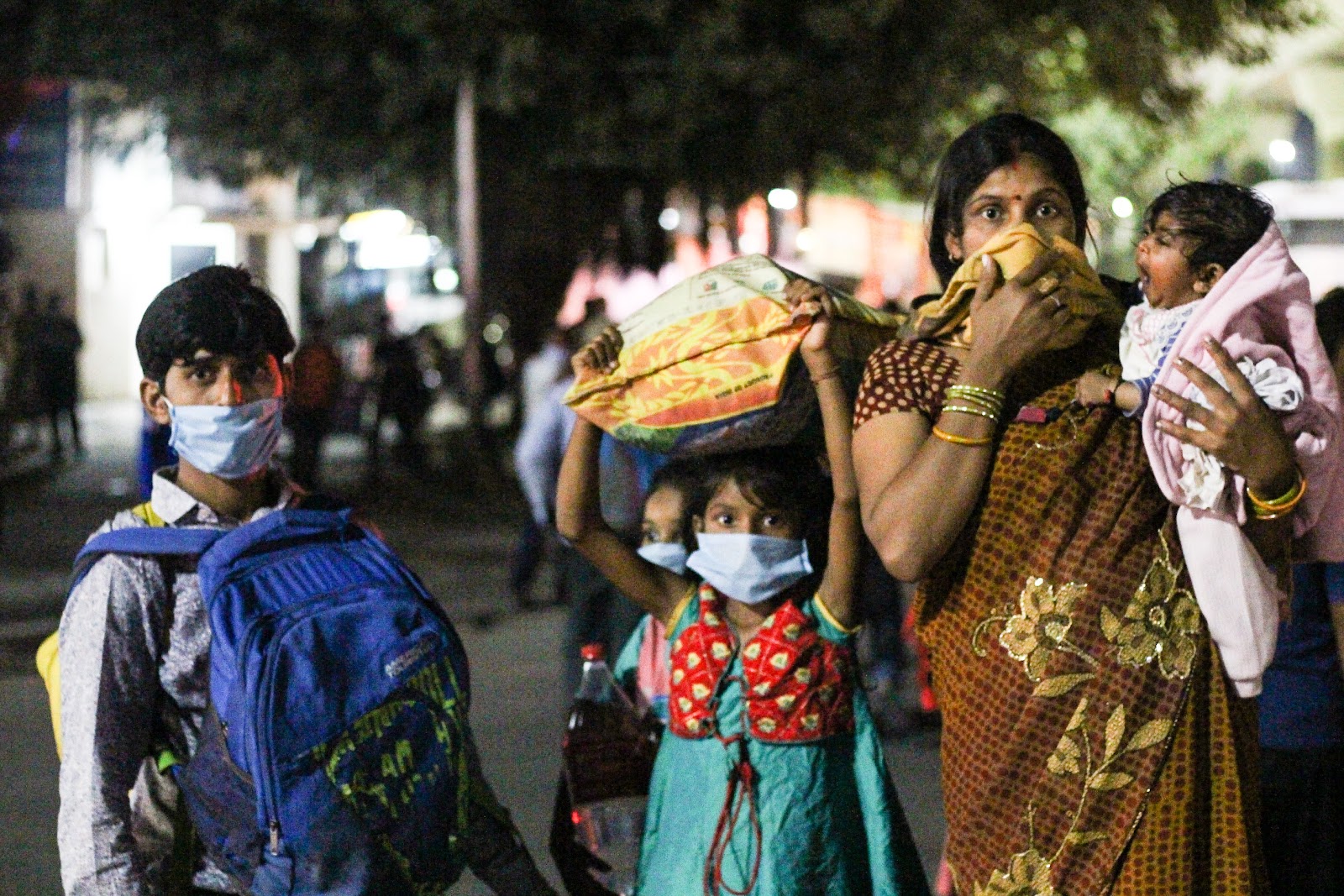 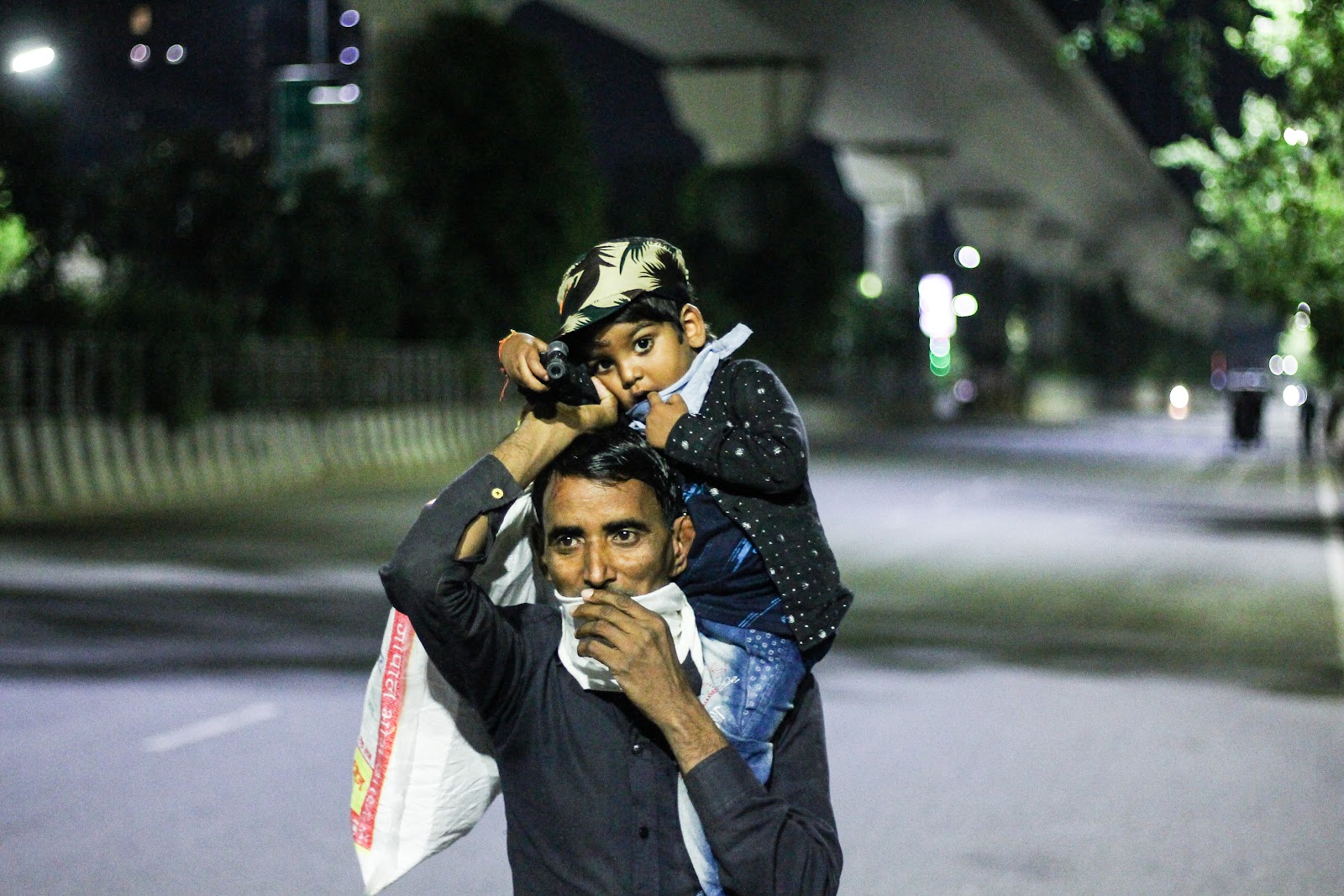