The news of fifteen migrant workers mowed down by a goods train in Aurangabad, Maharashtra has put the spotlight back on the plight of migrant workers - who have become the most obvious casualty of India’s Covid-19 response. The 15 dead were part of a group of 20 migrants who were walking along the rail tracks, returning home to their villages in Madhya Pradesh. Assuming that trains were not operational, the group slept on the tracks out of sheer exhaustion.

Harrowing images of migrant workers walking hundreds of kilometers on foot to escape cities for their villages made headlines soon after the government announced a nationwide lockdown with just four hours notice. These workers - all daily wage labourers - were left stranded without food, shelter or money, prompting a mass exodus.

The images were haunting to say the least, and governments came under a barrage of criticism for now making arrangements for these workers, as India’s pandemic response turned into a heartbreaking human tragedy.

“I would rather die of the pandemic than die of hunger,” was the common response, as images of thousands of workers walking home went viral.

The lockdown had suspended public transport including trains and buses, forcing the journey on foot. The exodus of migrant workers was a telling tale of their absolute powerlessness. You can read more about it here.

Soon after the lockdown, migrant workers began the long journey back home on foot.

The images disappeared as suddenly as these had appeared. The migrants seemed to have vanished into thin air, as the media blacked out the unfolding human tragedy and governments turned to making the lockdown a success. And the police joined in with gusto, with the occasional image of migrant workers being beaten into submission and told to go indoors.

The international media not bound to follow instructions from authorities here picked up the story and criticism mounted, governments announced the provision of buses to take migrants back home. Yet again a haphazard announcement prompted even more confusion, as thousands of migrants flocked to major bus terminals in cities to try and get on a bus home.

Images from Anand Vihar bus terminal in New Delhi betray the desperation; as the crowds swelled so did fear of the spread of the pandemic - with the onus of blame once again squarely lying with the government for a delayed and haphazard response. 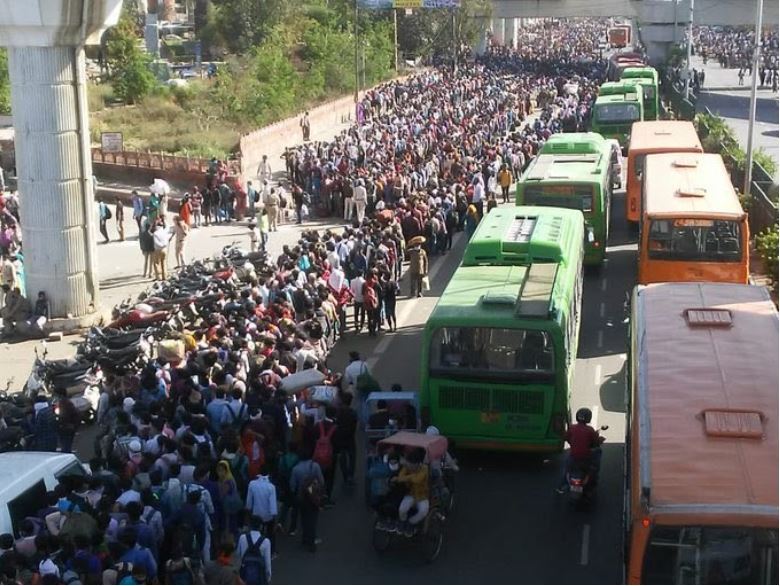 Crowds at Anand Vihar bus terminal in New Delhi, as migrants rush to get home

Soon after, images of migrants who had returned home being sprayed with disinfectant went viral, prompting outrage. The incident took place in Bareilly, Uttar Pradesh, and video showed officials shouting instructions over a megaphone, as migrants huddled together, squatting on the ground. The fear was palpable even through the still images, as the poor were robbed of the last vestiges of dignity.

Many took to social media to condemn this incident, highlighting whether the spraying of the strong disinfectant was reserved for migrants, or if passengers arriving at airports were to receive the same treatment?” Who are you trying to kill Corona or the migrants” citizens tweeted, aghast. 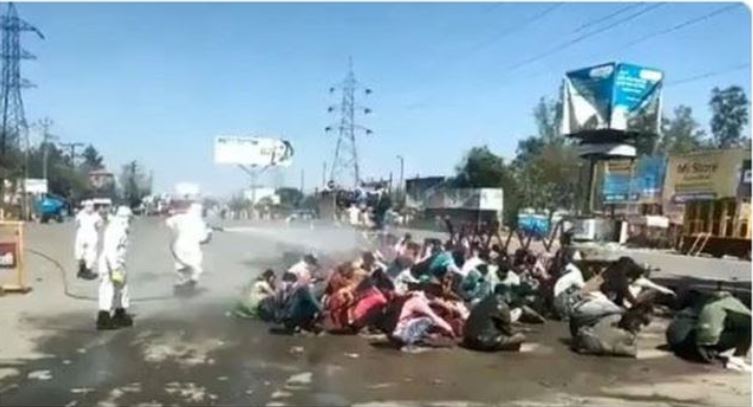 Migrants sprayed with disinfectant, in Bareilly, UP.

While some stranded migrants made it home -- either on foot or lucky enough to get on one of the government-operated buses -- most remained stranded in cities, rendered unemployed by the lockdown as they survived on meagre daily wages. They were put into shelters, to wait out the lockdown. The conditions were so bad that after several days in the tin sheds many burst out in Delhi, setting these on fire. In Surat thousands of workers wanting to go back to their homes came out on the streets and were lathi charged indoors.

Even as state governments scraped together provisions such as food and shelter, most migrants were unable to access either as they required ration cards, which many migrants either do not have, or have with village addresses applicable to their state.

State governments’ attempts to overcome this visible gap has been equally bungled. For instance, Delhi government’s e-coupon food scheme requires claimants to have a smartphone and access to the internet -- a luxury for most migrant labourers. Even so, the website for online applications for e-coupons crashed within a few days of launching due to heavy traffic, adding to the delays of issuing e-coupons for food. You can read a detailed report on the Delhi government’s e-coupon food scheme here.

The desperation of the migrant worker was again displayed when the government announced a lockdown extension. Thousands of frantic migrants gathered at Bandra Station in Mumbai, with police forcibly dispersing crowds. Once again, authorities were to blame - as the railways had issued as many as 15 lakh tickets for travel within a two week period, and many expected trains to resume services. You can read more about the incident here. 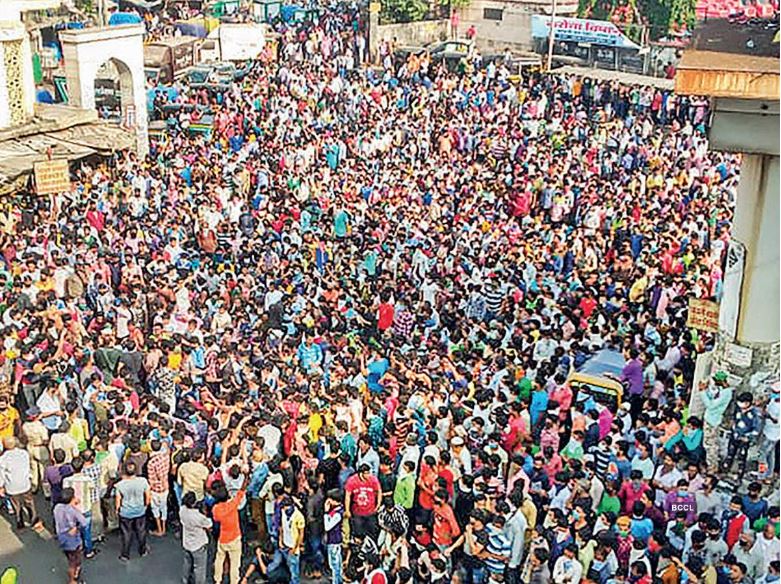 In May, when the government announced the operation of special trains to take migrant workers home - more controversy followed in the form of political bickering over charging migrants for tickets. Congress chief Sonia Gandhi criticised the central government for “charging” migrants train fare and said that her party would pay the ticket fare, hailing the workers as “nation builders.” The central government shot back, saying that the Centre was bearing 85% of the transportation cost, and the states would take care of the rest.

Nevertheless - at the time of writing, confusion over who can travel in these trains remains - as different states have different rules. Orissa, for instance, passed a high court order saying only those migrants who test negative for Covid-19 will be allowed into the state. The move forced the state government to immediately cancel permission given to other states, including Gujarat, to transport stranded labourers by train - raising questions on what would happen to those migrants who had already boarded trains and were on the way back home?

Delhi wants migrants to test negative before being allowed to board the trains. This is a big impediment as the poor do not have the resources to get such medical certificates, purchase tickets and then jostle with the crowds for a space in the trains. Chaos continues. Karnataka cancelled the trains, then under public pressure has decided to start these again. In the absence of clear cut guidelines, the train journey itself being offered to the daily wagers has turned into a nightmare.

The migrants have not disappeared. They are there, walking quietly without the media attention, the hundreds of kilometres to their homes --- a story of acute distress with reports of deaths along the way including that of an exhausted little girl. They are there in hasty, sordid camps from which all have not been able to escape. They are there rushing out in protest whenever they can for help. They are there trying to board non-existent trains.

After weeks of lockdown, the plight of migrants remains the foremost casualty of India’s Covid-19 response. It takes a pandemic to render visible the deep inequalities that make up the highly unequal societies we inhabit.