'No Work Here, We Will Have to Go Back' Say Migrant Workers in U.P.

With efforts to revive economic activity underway, reports suggest that the large-scale humanitarian crisis continues to unfold, with migrant labourers returning to their home states amid hunger, death and disappointment. Fears have been voiced in the cities of an unprecedented shortage of semi-skilled and unskilled labourers, with economic migrants refusing to return once the lockdown is a thing of the past.

However, among the migrant workers who have returned to their homes in eastern Uttar Pradesh, the common refrain is, “Jab majboori saamne hai toh jaana hi padega” (When we are faced with no other option, we will have to go back).

It’s been 25 years since Ramdas left his village, Sekhuiya in Siddharthnagar district, Uttar Pradesh, along with his two cousins. Their search for better opportunities led them to Panipat, Haryana, where they have been working as powerloom operators. Work was a mere two kilometres away from the room the three brothers were renting at a rate of Rs.1500 per month. “All was well,” Ramdas said, until the lockdown.

With no work or supplies, Ramdas, 45, stated that everybody in the nine rooms for rent here (three-four residents each) was primarily relying on citizen and organisational relief workers, who would distribute food twice a day. As the lockdown continued, the number of people with no access to food and water increased. In a bid to ensure no one went hungry the amount of food distributed to each person was reduced. “For some time we managed like this,” said Ramdas. “Then, we decided to come back home.”

“Our employer didn't give us anything, not even food,” Ramdas told The Citizen. “I have worked with this employer for three years but the maalik (owner) didn't even call to find out where we are, how we are, whether we have food or not. Only once we reached home did he call to ask us where we were. I told him we’d faced difficulties in Panipat with no supplies, no food and so we had come home,” he said.

Ramdas: “I do not have enough for expenses as in Panipat, I was sitting without work for two months.”

Ramdas was paid his salary on a weekly basis. “When we work, we get paid. Once the work stopped for two months, then we did not get a single paisa from them,” he stated, adding that the employers could have given them a certain amount for food and water during the lockdown, which they would have repaid once work resumed.

However, his brother, Garibdas said, “Other people have suffered more than us, so our time in lockdown was fine.”

Having registered to go home online, Ramdas waited for his turn to board a bus. He said acquaintances from Balrampur in Uttar Pradesh had managed to get their names on the list even though they registered after him. Nevertheless, he decided to join them on the journey home.

“We thought, let's reach Balrampur then from there we’ll see. We can start walking. Others are walking thousands of kilometres, we can also walk 100-200 kilometres. Majboori mein karna hi padega” (With no other option, we’ll have to), he said.

Ramdas took the bus from Panipat to Bulandshahr, from where he boarded another bus heading to Gorakhpur. “From there we walked because we didn't find any other means of transport. We walked for about 10 kms. We would walk and hitch rides in rickshaws, tempos as and when we found them,” he told The Citizen.

Along the way, the group was checked multiple times and were quarantined in a local primary school upon their arrival in the village.

However, even after having returned to the safety of his home, Ramdas’ troubles have not abated. “I do not have enough for expenses as in Panipat, I was sitting without work for two months. There's no work here,” he said. While he has a small landholding to farm, he says it is not enough for the family’s survival.

Will the brothers return to the city once it’s unlocked? “If it opens, and I have no work here, then of course, I will have to go,” Garibdas said, sounding distinctly worried. “As of now there has been no call from where I was employed to tell us whether work has started or not. So what can I say?”

“Though everyone is saying we will get work here under MGNREGA,” he added.

In Bareilly, Uttar Pradesh, the employment rate under MGNREGA has reportedly grown five times. With demand for work growing, payments pending and the 100-workday limit still in place, will NREGA be able to ensure employment for all?

“If we get work, then why would we want to go to the city? But if we don't, we have no choice. If not Panipat then we will go somewhere else, because I don't have enough to survive on for even three or four months, if I sit at home,” Garibdas told The Citizen. 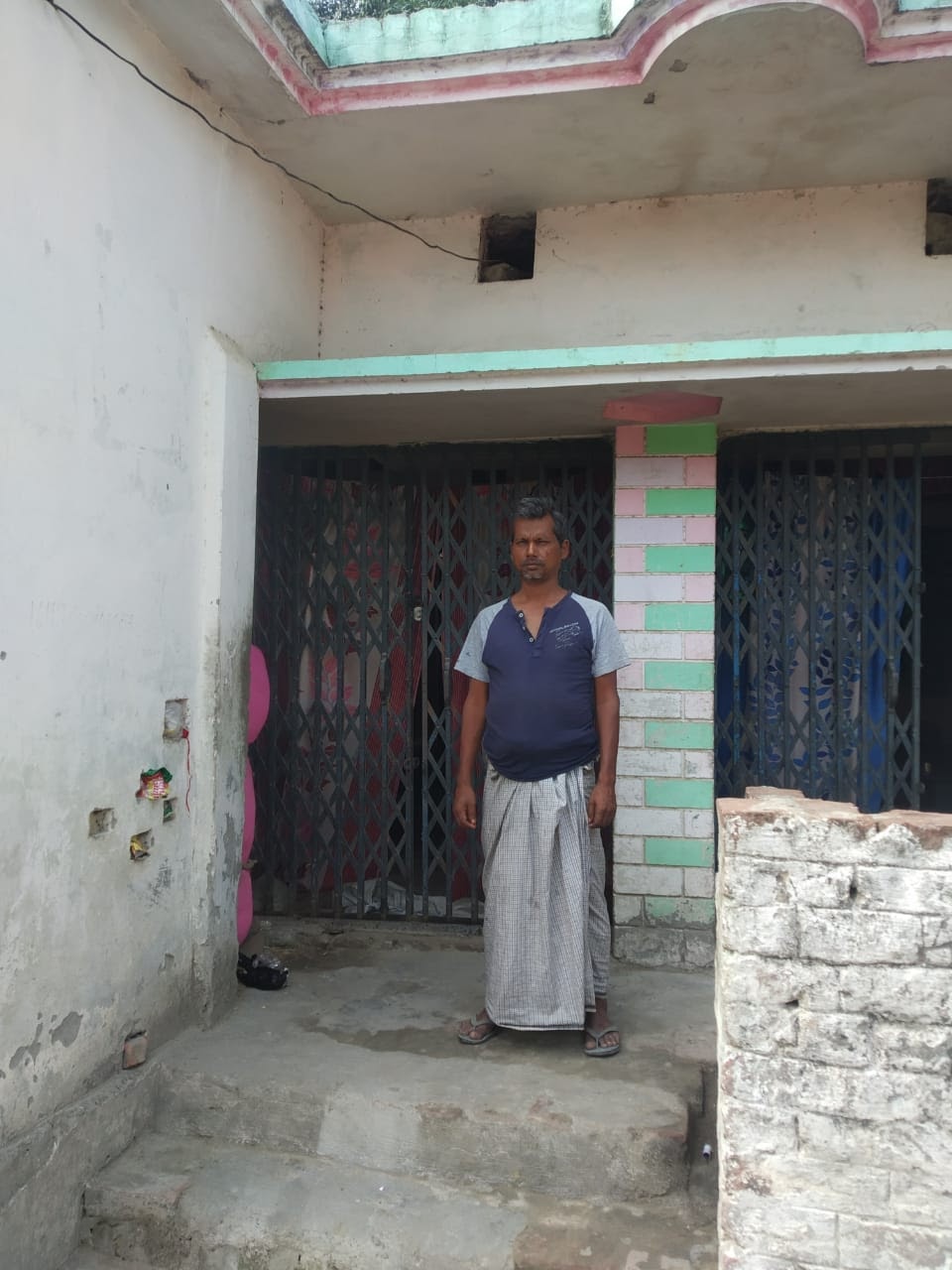 Garibdas: “If not Panipat, then we will go somewhere else…”

His brother Ramdas too would prefer to remain. “If I get work here, then I would prefer to stay here. Because in Panipat I was extremely disappointed how, even in such troubling circumstances, our employer did not support us when we have worked there for years.”

Ramgulam, 49, from Nibi Dohni village echoed Ramdas and Garibdas’ concern: faced with financial constraints, the looming pressure of unemployment and with families to support, returning to the cities is no longer a matter of choice.

Ramgulam estimates that he first left home in 1983, making his way from U.P. to Maharashtra in search of employment. After living and working in Bombay for many years, he spent 10-12 years in Bengaluru, before returning to Mumbai and taking up work as a daily-wage labourer once again.

“We don’t have much; there was no way of earning a living in the village. Over here there are no work opportunities; work can be found in Delhi or Mumbai so mostly people go there to earn. What else can we do?”

In Mumbai, as a daily-wage labourer, Ramgulam would set out in search of prospective employers. “Naukri hai, nothing is fixed,” he explained. As work ground to a halt with the lockdown, so did his earnings.

“We haven’t been asked for rent till now. We locked our room and came,” Ramgulam stated, saying he lived in a thatched-roof shack in Dadar Kabutar Khana, Mumbai.

“Even to come back home, we had to try very hard before we managed. We had to fill out the form online then run around to get our medical checkup done, deposit that with the police and after a week, our names came on the train list. That’s how we came back by train!” he said.

Ramgulam stated that he was charged Rs.675 for the train ticket. Seven people were allowed to occupy one compartment, and food and water was provided at regular intervals.

Only once the train reached Jhansi, Madhya Pradesh did they encounter difficulties. “We took the train on May 9 and reached Jhansi on May 10. The railway police weren’t allowing us to step down. And we were given nothing, no food or water. We weren't even allowed to get down to fill water,” he told The Citizen.

“It was extremely difficult. Now that I have reached home, I am a bit more relaxed,” he said.

From Jhansi, the train terminated at Gonda, U.P., where the passengers underwent a medical checkup and were given a bottle of water and a packet of biscuits. Ramgulam then boarded a bus headed for Siddharth Nagar.

Upon reaching his village, he underwent the mandatory quarantine at a primary school. “In quarantine, we used to get food from home. No arrangements were made there. Whatever was made at home, it would be brought for us. Just the space was provided to us, the charpai (stringbed) and everything else was ours,” he said.

Ramgulam told The Citizen that when the time comes, he will return to the city to look for work. “We are helpless, we have no choice. As of now, I think I will have to go back,” he stated, resignedly.

“See, everyone who moves to different cities and states goes there in a state of helplessness. Koi khushi se nahi jaata hai (Nobody goes there willingly). If we got employment here, then who would want to go?” he asked.

“There, we get daily wage work. Here, we will work for ten days, sit for twenty. Kya kamaenge, kya khaenge, kya bachaenge, kya hum aage badh paenge?” (What will we earn, eat, save, how far will we be able to progress?) he asked, adding that only after working hard night and day was he able to provide for his family back home in the village, before the lockdown.

Many of those who build the foundation of our economy might return after all to the cities post lockdown, despite preferring to remain in their villages. Their prospective employers will heave a sigh of relief and work may pick up pace again, but the return of the “migrant worker” will not be of their own volition – it will be driven by sheer necessity.