Hate came to his door in the form of abuse and threats, and within hours he found himself

without a job. Or at least so he fears as he still has to get written intimidation from the airlines he works with.

Asif Khan, a trainee first officer with GoAir was woken up a couple of days ago with the airline management asking him whether he had a Twitter Account and whether he had misused it. “I said no, of course not and rushed to check,” he said and that's when all hell broke loose as far as he is concerned.

He found he was ‘trending on Twitter’ through a BoycottGoAir hashtag for vicious tweets against Hindu gods from an account also under the name Asif Khan. And the target of a volley of unending hate and abuse, where even his mother and sister were dragged into the campaign with threats of rape and assault.

Shocked beyond belief, the young trainee pilot said he immediately saw that the account was not his, and informed the company as well as all those who had been asking him. “I was not terribly worried at the first stage as I thought it was not me and once the confusion is cleared there will be no problem,” he said.

But that was not to be. As something called Buzzing Trends channel posted a quick video, taking photographs from trainee pilot Asif Khan’s Facebook page and identifying him as the person responsible for the ugly tweets hitting at Hindu religious sentiments in completely unacceptable and nasty language.The family started pointing out the case of mistaken identity in the comments section and Khan said that eventually the channel realised the mistake and withdrew the video. By this time Khan said, “I knew it was all very serious.”

The alleged imposter called himself Asif Khan of course, with a different photograph from the trainee first officer, a different profile by and large, and of course a different photograph. The confusion arose from the fact that he described himself as “cabin Crew at @Goairlinesindia”. He described himself with “Love Politics, student of political science, supporter of Capitalist ideology, Secular by nature and not an andh bhakt”. The Twitter account has since been deleted and the trainee pilot has no idea who this person is. He has urged the Cyber Cell in a formal complaint to look into this, and is currently drafting letters to all the possible authorities to clear his name. He has lodged a police case as well. 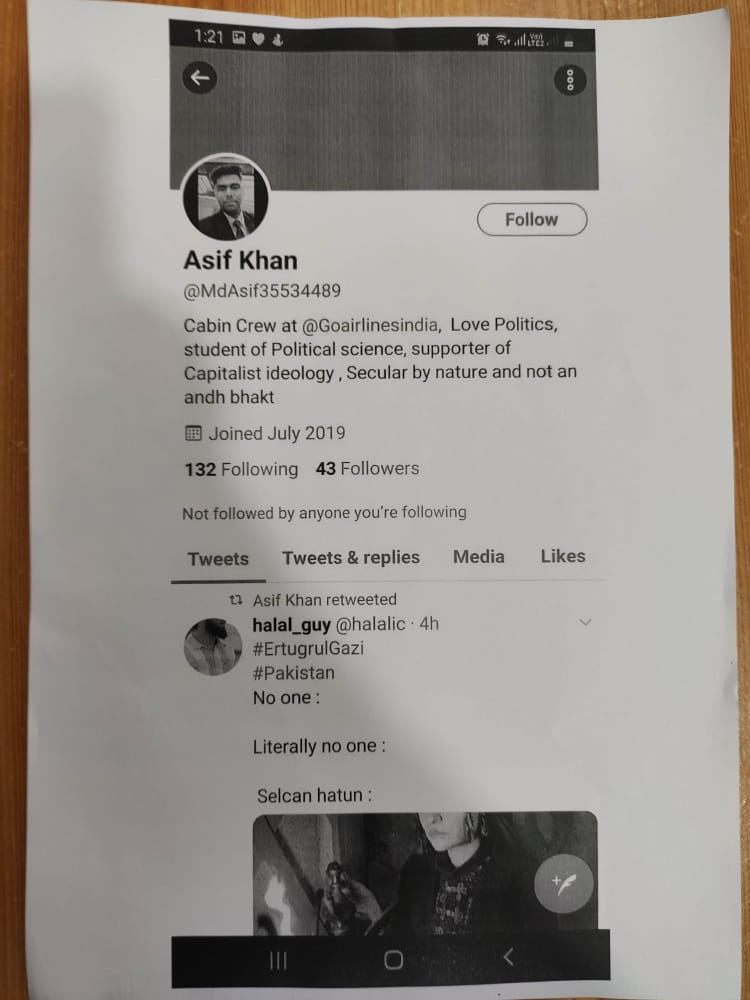 “My family has not slept for two nights, my mother is so scared, I myself am so tense as I don't even know whether I have a job any more,” he told The Citizen. His father is ill, and the family he said is extremely stressed out.

Khan always wanted to be a pilot and after completing his Class 12 got his flying licenses, including from institutes in Australia and more recently in Jordan. From the last he qualified as a Type Rated pilot on A-320 that he said finally gave him a break, when he qualified with GoAir. He would have been flying by now had it not been for the lockdown which delayed the final training as all trainees had to return to their home cities, his being Mumbai.

Khan said that he has not received final word from the Airline in writing, but the management posted a tweet disassociating itself from him. He has been told that this publicity is bad for the airlines, and he is worried that the stigma continues to stick where his employers are concerned.

Khan’s twitter handle describes him as “Pilot by profession, Traveller, Entrepreneur, Artist , Human INDIAN, Special like each of us with a destiny even more special. Stay Weird. Unlike the other account that has a handle @MdAsif35534489 his is @FarOutAsif. 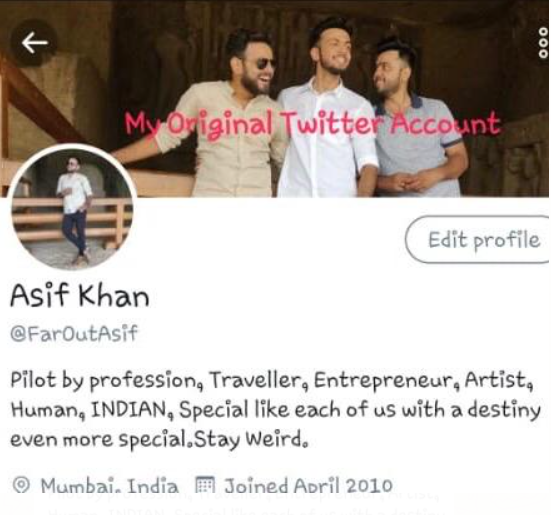 Asif Khan said he has been going through “hell.” He said he had struggled to get this job and it was only after yet another course in Jordan that he was so excited to get the break. He said he has now lodged a formal complaint at the local police station and also written to the cyber cell to investigate the account. He has also put out a Facebook post stating that he respects all religions, and could never do this kind of a thing. He said that the GoAir training batch, his school and college friends could all verify his credentials.

But for the moment his employers don’t seem to believe him. No one is returning his calls, and in a matter of two days he has been pushed to the periphery, uncertain of his job, without support, and under the eye of deep suspicion. “I just want the cyber cell and the police to find the imposter, to catch him so that I can clear my name and get back to my job,” he said.

Meanwhile those who know Asif Khan have been expressing support for him as in the FB comments below: