Chai in Aligarh is not just a beverage; it is deeply ingrained in the local culture.

The small town of Aligarh is famous for a lot of things. The Aligarh Muslim University (AMU) keeps it on the map and the headlines, the lock industry of this town features in movies, songs and other popular references. But ask anyone who has ever been to or lived in this quaint place and they’ll immediately tell you that the first love of every Alig (resident of Aligarh) is not a partner, or a place. It is a feeling, with a beautiful aura and an even more amazing aroma, and it is a cup of chai, or tea, at one of the many dhabas in the city.

In the hustle and bustle of the city of Aligarh, you cannot go a couple of metres before you find a dhaba, a roadside nook or shop, where a kettle is boiling over with strong, sizzling tea, and scores of people mill about, young and old. The city’s people share their sorrows, their opinions, and their camaraderie over some cups of tea (they can’t stop at just one cup). The chai dhaba culture of the city is imbibed in the hearts of its people, leading to a running joke among old-timers: this city does not have blood running in its veins, it has chai.

The attraction of Aligs towards tea is so strong that it has become synonymous with the city. A young person whose family has lived in Aligarh for generations can face the risk of being disowned if he were to choose coffee or any other drink over the semi-brown sweet beverage. Even though a majority of the Indian population has turned towards chai as a drink of choice following the imperial culture, there is a reason that Aligarh’s tryst with tea has been so old and strong. This pull towards chai can be traced back to the most pivotal institution of the city, the most significant contributor to the culture of its people, the establishment of the Aligarh Muslim University. 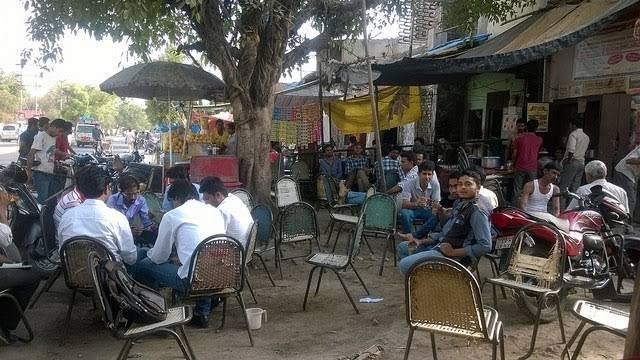 A usual scene at a chai dhaba in Aligarh. Credits: Mohammad Rafay Qadri

Ali Nadeem Rezavi, a professor of history at AMU explains, “The arrival of British teachers at the Muhammadan Anglo-Oriental, accompanied with a push for modern, Western education brought along with it the culture of the British, chief among which was the habit of having evening tea”. However, from an aristocratic symbol of class, the culture of drinking tea soon became the norm of the commons. “As more and more of the students of the University could afford tea, as compared to other forms of snacks or other treats, the varsity students began to have it when they wanted to relax with each other, and this led to the love of tea being included in the culture of the city. Almost every old memoir of an Alig mentions their pleasant evenings sipping tea”, he said.

As generations graduated after each other, they took something else apart from their degrees from this place: the unending love for tea. And as there was demand, so there was supply. As old as the love of chai was in the city, there are multitudes of tea spots just as old, that have become an indispensable organ of the city. 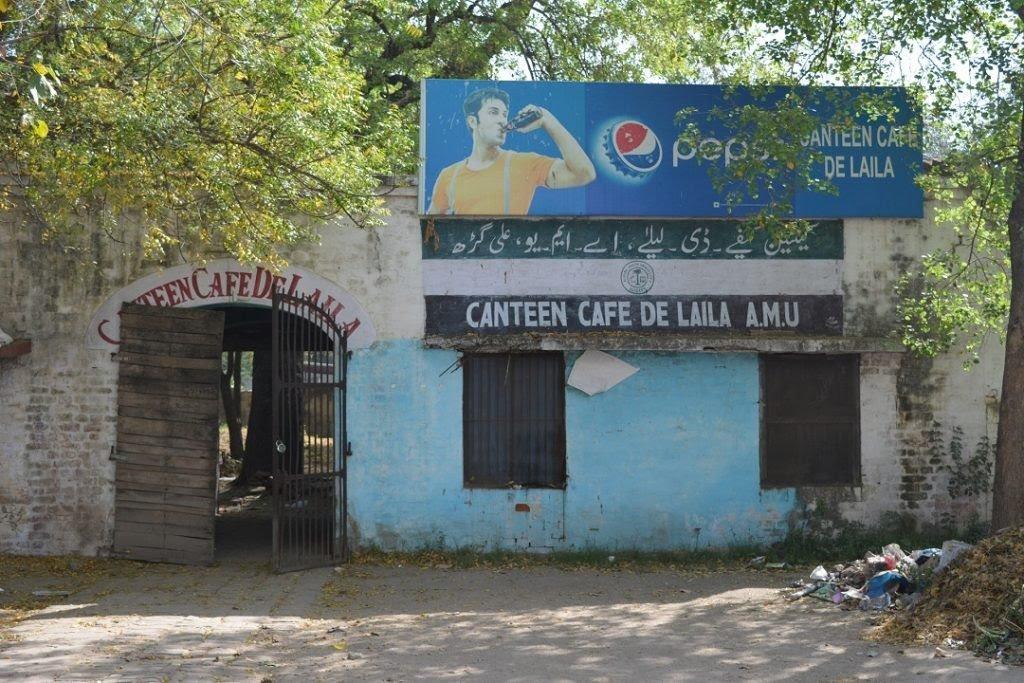 These words evoke emotions in the heart of the people well-versed with the young generation of Aligarh. They are often sung with gusto, being a part of the AMU taraana, or anthem. These lines, written by Majaz Lucknawi, may very well be referring to the times spent at the café and dhaba littered across the city, particularly at the Shamshad Market, Zakariya and Chungi areas. Here, the young and old enjoy peace, conversations, and cups of tea.

Speaking of Majaz, he is credited to have coined the name of the oldest tea joint in Aligarh, Café de Laila. The legend goes that he had initially named it Alif Laila, when it was first established in 1933. A British Professor had then changed it to Café de Laila. The owner of the establishment, Farat Hussain, recounts that he bought the café in 1991 from Abdul Hafeez, because Hafeez’s son “chai ka karobaar samajhte the, zayeka nahin” (he understood the business of tea, but not its taste). Café de Laila was one of the two oldest tea-joints of the city, but is now abandoned to make way for a Swimming Pool, and Hussain runs a separate establishment at Shamshad Market. 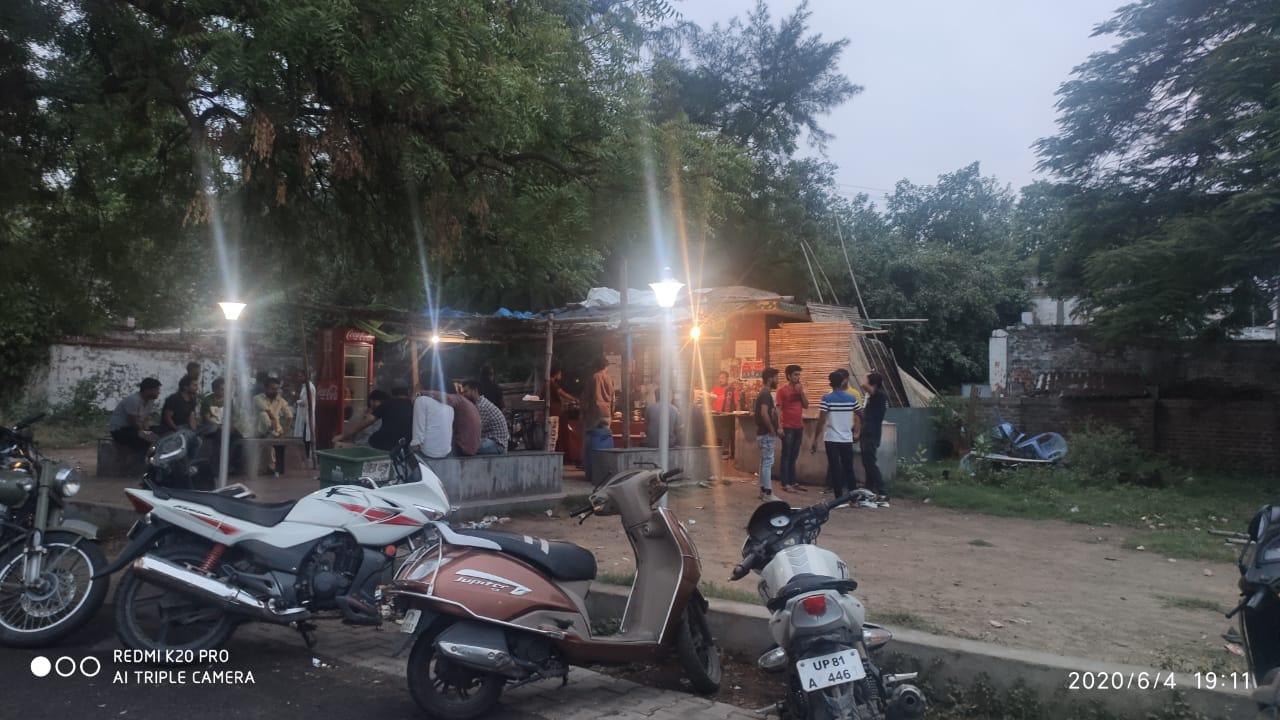 However, the oldest chai café in Aligarh is still going strong. Café de Phoos, a dimly lit point for students to enjoy tea, was owned by Majib Ahmed. He recollects that the café was started by Ahmed’s Nana (maternal grandfather), Zuberi Sahab, in 1932, who after partition moved to Pakistan. He handed the keys of the café to his Dada (maternal grandfather) from where Ahmed’s father took up the responsibility of the place after his death. And, in 1955, the mantle passed to him. 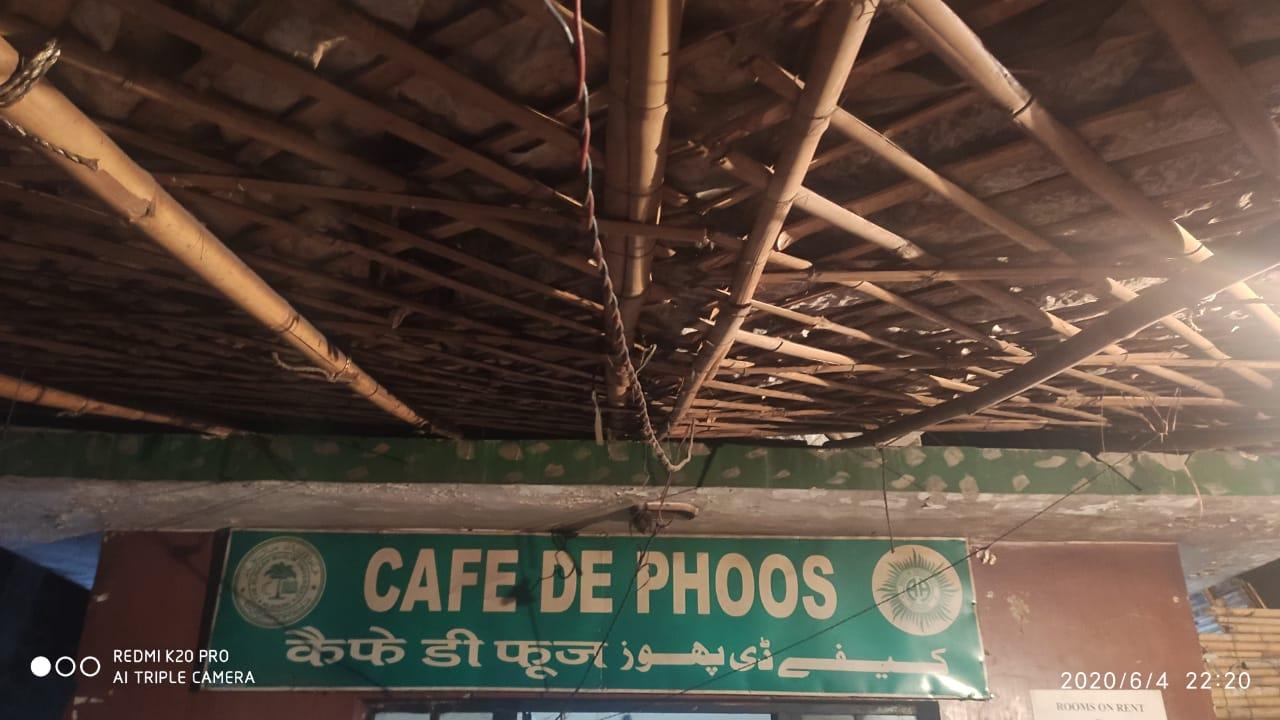 The nomenclature of the place is very interesting, he says. “Dada named it, as when it was first started it was only a small room with a roof with thatched straws (phoos). The place soon began to be called as Café de Phoos by students and elders alike.” Right now, the place is run by Faisal Mujtaba, at the same Aftab Hall it was started at.

The love for tea has ingrained itself so deeply in the lives of people at Aligarh that it becomes difficult to separate the history from the nostalgia. Elders of the city often reminisce of the times they spent over a hot cup, discussing India’s new foreign policy to their next-door new friends. Prof Rezavi talks about his student days of the 70s where he used to sit with his friends and teachers at Hafeez ka Dhaba, and savour a cup of tea served in white cups and saucers. “The power of tea was such that whenever a group of students fought, they settled for a ‘compromise’ over tea itself.”

Abdul Sabur Kidwai, a student of English narrates an incident to explain just how interconnected the culture of tea and the city was, “My father once told me of how tricky it was to have tea with seniors. Seniors were expected to be served first, but the kettle with which we were served had the tea leaves deposited at the bottom, making the first few cups of tea less delicious than the last ones. They finally had to distribute it equally, multiple times, to ensure that even if the seniority were unequal, the taste of tea wouldn’t be.” There have been times when matrimonials have been published in Aligarh’s newspapers seeking a spouse only on the basis of tea they can make. 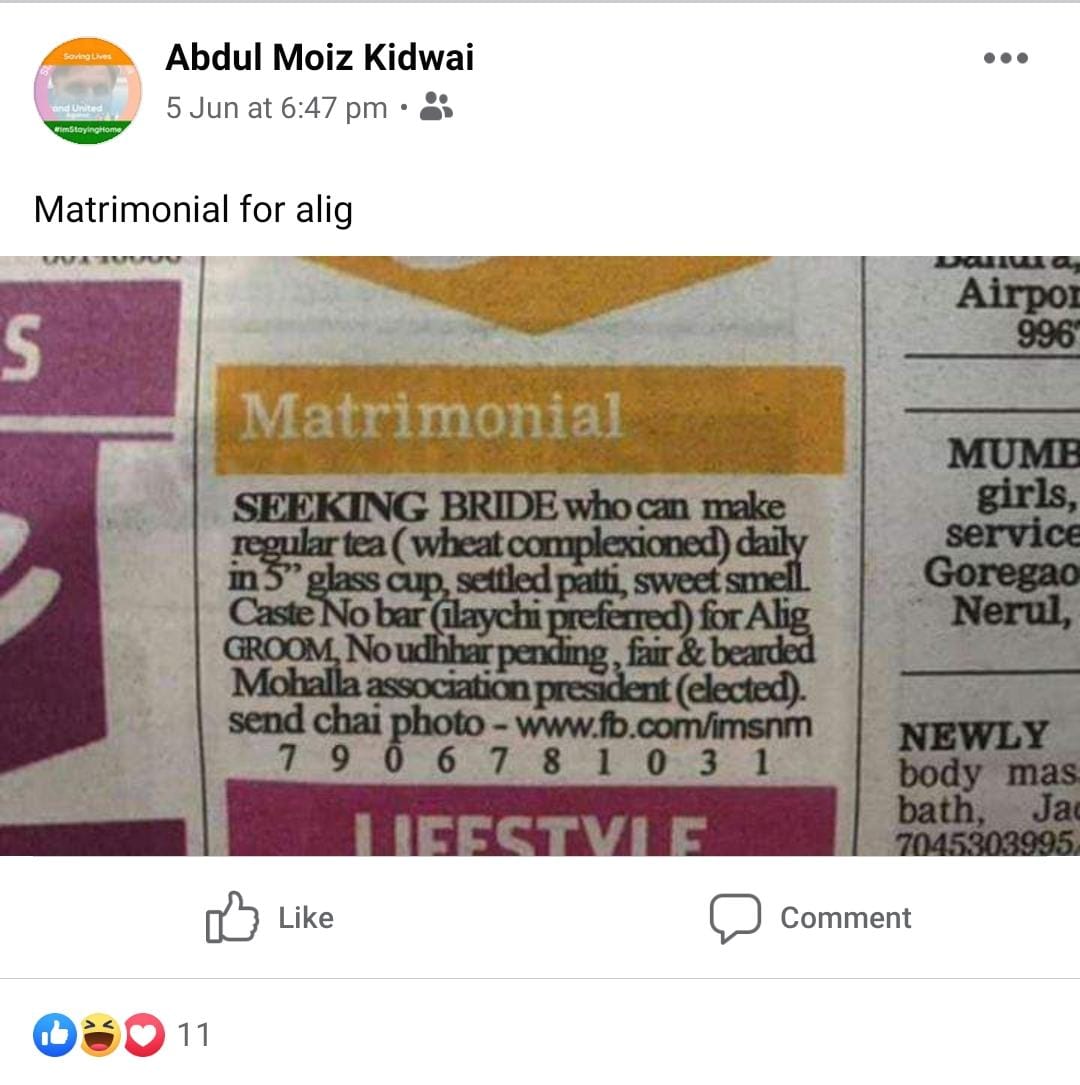 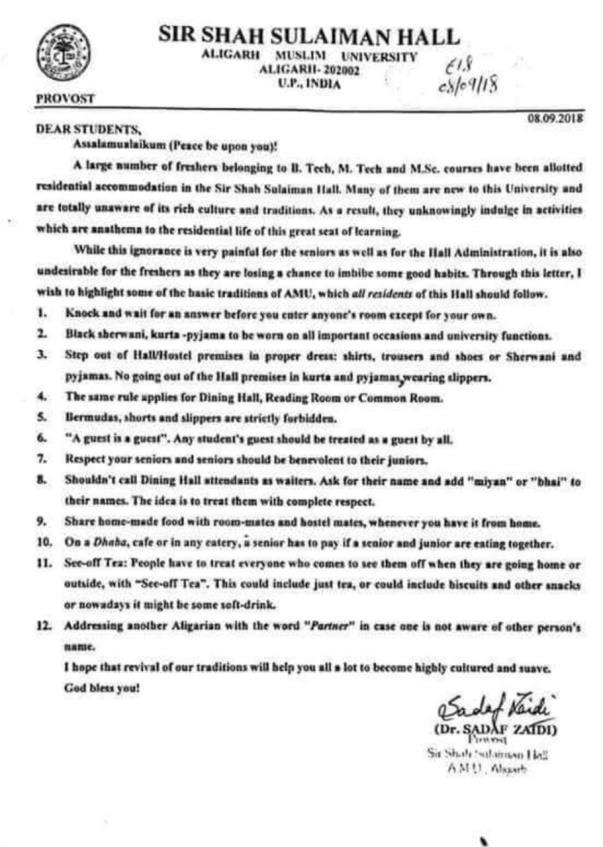 The status of tea has grown so much that there are official guidelines issued for students in Aligarh, so as to understand the nuances of enjoying not just the drink, but the culture as well. The history and tradition are kept alive by a number of relatively new dhaba owners. Hasan Ahmad, who runs the crowd-named Hasan ka Dhaba near the Shamshad Market, says that he has been running the place since 1994, and the entire road across the market is full of students almost all day and a good half of the night. Their conversation skips from topic to topic, their friends and family, their dreams and hopes, their successes and failures, politics and religion, all over sips of tea.

Mahendra Pal, the owner of Murari Tea Stall near the Ghantaghar of AMU, says that tea is the one thing he has seen that unites the entire city of Aligarh. For the last thirty years, he has seen people of all religions, castes, class, and creeds sit together, discussing everything under the sun with sumptuous tea in their hand. 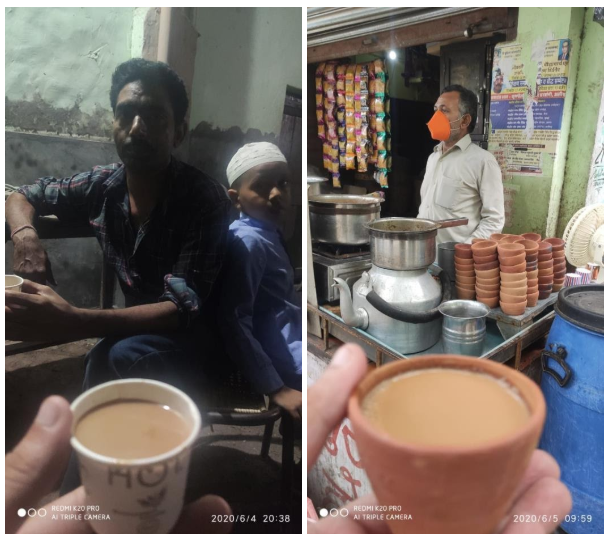 On the left, Hasan Ahmad, on the right, Mahendra Pal, divided by dhabas, united by chai, Credits: Ansab Amir Khan

Perhaps, the tea in Aligarh is mixed with more than just leaves, milk and water. It brews with hope.

Ansab Amir Khan is a student of Engineering at Aligarh Muslim University and an aspiring journalist.

Cover Photo: One of the many chai dhabas in Aligarh. Credits: Engg Maqbool