She said she hoped to eat that night

NEW DELHI: My friend (say Arti) and I were driving back home in her car when I saw a silhouette against the dimming sky. It was a busy road outside the Rithala metro station. To my surprise, it was Yasin bhaiya hauling his wheelchair, begging from one person to another across the road.

I recalled him from the days he would sit outside the station selling local mobile accessories like chargers and earphones. Waiting for an auto, I would see him laughing and cracking jokes with his friends, the only memory I carried of him. Seeing him rebuked or shrugged away by people that day, was not a happy sight.

I walked up to him and asked where his khomcha was. Yasin bhaiya couldn’t look into my eyes. “Didi, kaam chhoot gya lockdown mein” (Didi, I lost my livelihood in the lockdown).

Yasin lives with his wife and two children in a jhuggi near Rithala village. A 12th standard graduate, he was ready to clean toilets to feed his family. Almost choked up, he said he was ashamed to beg in front of his children. He was afraid he might be humiliating them.

With some 20% of urban workers recorded to have been dismissed from their jobs during the lockdown, the city is full of such choked voices, empty stomachs, pain-filled eyes and withered lives.

Bikkauddin and his wife had to sell their land and leave their family in Badaun, UP to come to Delhi. Doctors said he could only be cured in Delhi. Six months back he got treated in a government hospital and had to get an entire lung removed.

Bikkauddin was standing outside the factory where he had worked as a guard for a year before he was fired amidst the lockdown. The factory owner’s excuse was: “You need rest.” He was standing there hoping to run into his supervisor at the entrance.

He has received no relief from the government. Because of serious breathing problems, he cannot stand in the long queues outside the Hunger Relief Centres, so has had to depend on borrowing from every next person he knows.

“I won’t lie, Madam: I can’t breathe. I came here to get treated but it seems I will die of hunger in this city. I will die soon.”

Around two kilometres ahead of this man who declared that hunger would soon kill him, I saw a couple sitting on the road. They were 65-year-old Ramakanth and his wife. They had been running a tea stall for the last four years. They live in a jhuggi with their 7 children and the 3 kids of Ramakanth’s dead brother and sister-in-law.

Since the lockdown, they haven’t received a single penny from the government. With a dried up livelihood and no ration at all, there was a time when the entire family had to sleep without food for seven nights in a row. They had to borrow to be able to eat one meal during the day.

His wife said they had borrowed 500 rupees that day to sell bhutta, “roasted corn” on the road. With a sad smile she said she hoped to eat that night.

It was getting difficult for me to carry all those words. I had to fill my consciousness to the brim. I asked Arti if we could drive to some other places within 10-12 kilometres. She sensed my anxiety and gave a friendly nod.

We covered a good deal of known and unknown roads. Outside a hardware store I saw a riksha puller struggling to take a sharp turn. His name was Pankaj. He has fingers in only one hand. He has had to pull a loader rickshaw ever since he was dismissed from his job at a grocery store.

In the past four months, he had only got 500 rupees from the government. He also tried approaching the shop owner but got no help. With the landlord forcing him to pay rent, he had to leave the flat with his wife and two little daughters at midnight.

With Pankaj’s plight haunting me, I went ahead and saw two masons arguing outside a building under construction. I stood by their side and waited for them to stop. After a while, I asked one of them about his family. He seemed a little annoyed with the question but answered.

He shouted at the government and showed me his Aadhar card. “Whenever I go to the ration shop, all I hear is Come tomorrow, come tomorrow. After spending 6 hours in a queue we get no ration, no food. We stand in long queues at the HRCs and get rice full of stones.” 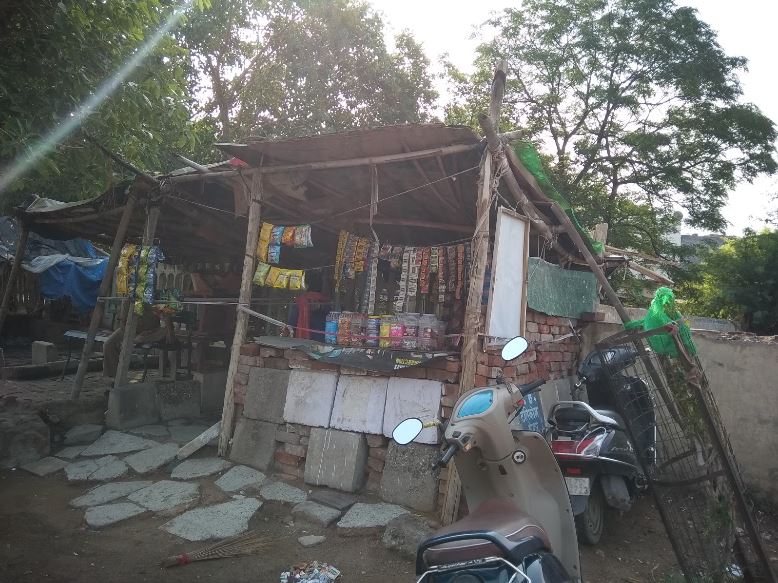 With a lump in his throat he added, “The government might have promised us relief. But we have got nothing. Maangte nahi to hum mar jaate.” Had we not borrowed, we would have died.

He turns away. I couldn’t even ask his name.

To me he was someone this country had promised food and dignity. And there he was, standing deprived of both. I didn’t dare ask his name.

At the corner of two secluded roads, I found Satya Narayan sitting in a khomcha outside a closed factory with 5-6 packs of cigarettes, a few matchboxes and 2 gutka strings. It was all he had. He used to work as a carpenter around 5 years ago when he lost his leg and hence his job. Since then he had been searching for a proper place but was told to move every time he set up a paan shop.

During the lockdown when they couldn’t pay the rent, their landlord forced them to leave. Then he, his wife and three children started living in the garage of an empty flat in an apartment. He said they had received 500 rupees from the government twice in four months. He had got no ration till then. Every night the family prays they won’t be kicked out of the place that they call home.

Then we met Trivesh didi, sitting under a tin shed with 15-20 garlands. She travels 6 kilometres from Nangloi to reach Rohini at 5 AM, staying there till 8 PM. She barely makes 60-70 rupees a day.

Trivesh didi has been living in Delhi for the past 35 years and still did not have a ration card. The clerk took a bribe of 5,000 from her and still didn’t help her. Her husband died two years back and she lives with her four little children, the eldest being 10 years old.

Since the lockdown was imposed, she has only received 4 kg of black rotten wheat. Holding back tears, she said “Didi, janwar bhi nhi kha sakta vo khaana” (Didi, even an animal would not touch that food).

Before her husband died they had bought the room from a relative who could not pay the electricity bills. Their backlog stood at Rs.2,45,000. She had to run from pillar to post during the lockdown, begging almost all the officials when they asked her to give a bribe of Rs.75,000 for a write-off.

For the past 7 months she and her children have been living without any electricity. She bursts into tears. “Didi, mere 3 saal ke, 5 saal ke bache bhookhe sote hain. Unhone teen mahine se doodh nahi dekha.” (Didi, my 3-year-old and 5-year-old kids have to sleep on an empty stomach. They haven’t seen milk for the last three months.)

Tears rolled down her cheeks. “Paani mein cheeni ghol kar pilaati hu jab doodh ke liye rote hain” (I have to give them sugar water when they cry for milk).

I could not help but stare at the appalling reality of this city which has large flyovers running, magnificent malls sparkling at night, luxury cars in front of lavish showrooms. I caught glimpses of both heaven and hell and had to hold both in my eyes.

We were coming back to my apartment complex when I saw a poster stuck on the gate. It said, “Mera Bharat Mahaan…”