Omissions That Hurt, Especially When It Is the PM Who 'Forgets'

When the Prime Minister of a nation ‘forgets’ to give equal status to festivals of other religions other than his own, while addressing his country and its people, there is great cause to worry.

Twelve upcoming festivals of India were mentioned in his 4pm speech yesterday, but Eid, Guru Purab and Christmas were skipped in the long list that highlighted just one religion.

Eid which falls next month has been conveniently overlooked, as has been Guru Purab that is in November and of course Christmas at the end of the year. This is obviously a well-thought out strategy of appeasing the fanatics and his followers but without a care for the rest of the nation whereby deliberately hurting religious sentiments as always and ensuring that he carries forward his ‘Hindu Rashtra’ policy. Remember, how ‘Good Governance Day’ came into effect in 2014.

It is virtually impossible to know India without understanding its religious beliefs and practices, which have a large impact on the personal lives of most Indians and influence public life on a daily basis. Indian religions have deep historical roots that are recollected by contemporary Indians.

The ancient culture of South Asia, going back at least 4,500 years, has come down to India primarily in the form of religious texts. The artistic heritage, as well as intellectual and philosophical contributions, has always owed much to religious thought and symbolism.

Contacts between India and other cultures have led to the spread of Indian religions throughout the world, resulting in the extensive influence of Indian thought and practice on Southeast and East Asia in ancient times and, more recently, in the diffusion of Indian religions to Europe and North America. Within India, on a day-to-day basis, the vast majority of people engage in ritual actions that are motivated by religious systems that owe much to the past but are continuously evolving.

Religion, then, is one of the most important facets of Indian history and contemporary life.

A number of world religions originated in India, and others that started elsewhere found fertile ground for growth there. A variety of independent tribal religious groups also are lively carriers of unique ethnic traditions. The listing of the major belief systems only scratches the surface of the remarkable diversity in Indian religious life.

The local interaction between great traditions and local forms of worship and belief, based on village, caste, tribal, and linguistic differences, creates a range of ritual forms and mythology that varies widely throughout the country. Within this range of differences, Indian religions have demonstrated for many centuries a considerable degree of tolerance for alternate visions of the divine and of salvation.

Religious tolerance in India finds expression in the definition of the nation as a secular state, within which the government since Independence has officially remained separate from any one religion, allowing all forms of belief equal status before the law. In practice it has proven difficult to divide religious affiliation from public life. In states where the majority of the population embrace one religion, the boundary between government and religion becomes permeable.

India is home to over a billion people, accommodating incredible cultural diversity between languages, geographic regions, religious traditions and social stratifications. While 94% of the world’s Hindus live in India, there also are substantial populations of Muslims, Christians, Sikhs, Buddhists, Jains and adherents of folk religions. For most Indians, faith is important. But let’s not forget, that India is a religiously pluralistic and multi-ethnic democracy – the largest in the world.

Our constitution provides for freedom of conscience and the right to profess and practice religion of our choice. It has protections for minorities against discrimination on the grounds of religion or caste. In 1976, the constitution was amended, officially making the country a secular state.

Generally speaking, Indians tend to have a strong sense of pride in the distinctiveness and diversity of their culture. A considerable amount of pride stems from India's rich artistic cultural exports of music, fine arts, literature and spirituality.

Religion has historically influenced Indian society on a political, cultural and economic level. There is a sense of pride associated with the country’s rich religious history as the traditions of Hinduism, Buddhism, Sikhism and Jainism all emerged out of India. Moreover, while a majority of people in India identify as Hindu, the medley of religions that exist within the country continually impact contemporary society. Look around and see our rich religious history visible everywhere, especially in architecture, and it is not uncommon to find various places of worship, such as a Hindu temple, Muslim mosque and Christian church, all next to each other. That is what India is and should remain that way.

Respect for all religions is the need of the hour – India has always upheld that. 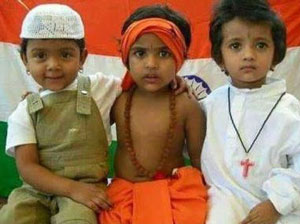