Statement calling for the release of Varavara Rao

Aseem Sundan, a young poet from Jammu and Kashmir, recites this compelling verse when asked about the present-day poet’s dilemma. Aseem is among the 50 young poets who have put forward a public statement to release the Telugu poet Varavara Rao booked under the Unlawful Activities (Prevention) Act (UAPA) on August 28 2018. And, from then it’s been 22 months since this 81 year old poet-activist has been detained for trial in the Bhima Koregaon conspiracy case.

VV Rao was among many activists to be put behind bars during the Emergency in 1975 under the Maintenance of Internal Security Act (MISA). He was released only after the Janta party formed the government and scrapped the very act. “The statement basically talks about how Varavara Rao has been arrested so many times by so many different governments during his life and been acquitted by the court of law every single time. This very apparently implies that ones who are in power want to harass him for his verses” said Aseem who is among those who have drafted the audacious statement.

“It is very clear that Rao is only being kept in jail by virtue of him being a poet who questions the powers-that-be,” the statement reads. “While we as young poets not only understand the value and importance of speaking for the people and questioning the ones in power, we take it as a responsibility to uphold. It is because of public poets like Varavara Rao that we, the young poets, are able to write and speak for the society and other matters,” it adds.

On July 16, Varavara Rao tested Covid-19 positive, after being shifted from Taloja Central Jail in Navi Mumbai to JJ Hospital.

Earlier, two inmates died inside Taloja prison (where he had been imprisoned) and have been tested COVID positive. This is in the backdrop of the report issued by Commonwealth Human Rights Initiative wherein it is mentioned that Maharashtra holds prisoners with an occupancy rate of 148.9%. Taloja Central Prison houses 2,313 inmates (as of June 19), against its official capacity of 2,124. Last Sunday, VV Rao’s family members held an online press conference where Mr.Venugopal Rao appealed, “We make only one demand: Don't kill him in jail.” His wife confessed that on the call that she received on July 11, he seemed confused, and did not comprehend the questions that had been posed to him. The press conference had further put pressure on authorities, prompting the transfer.

“We have put forward our plea to release him on bail and meet his family. Until these demands are met, we as fellow poets stand uncompromised,” said Yashi Verma, another poet hailing from Delhi who has signed the statement. She further said, “Our statement is different in the sense that we are not only vouching for Rao's release but also considering the aftermath of his unjust imprisonment will have on the fellow poets as a community and on poetry as an art form. If this unjust imprisonment continues then it would further discourage the upcoming poets to speak without fear. We have a duty to fulfil towards them just like Rao fulfilled his duty towards us.”

Next month will be a year after the UAPA amendment. So far, It has recklessly been used as a tool to curb dissent on the name of national security. “Only a maliciously cruel government can do such things to curb the voices of dissent”, said Nabiya Khan who is well known for her use of artistic expressions to put across her sharp opinions. “If the poets are afraid and threatened, the country becomes a scripted circus. Don't do that to our free India. Revolutionary poets are not criminals!" said Nidhie Saini, another well-known young poet who signed the statement.

“It is always about the collective strength and in the last few days, we have seen a huge example of what it can do. The hooligans who harassed a comedian online were arrested within hours because of the pressure the social media had created by reporting the heinous crime and nudging the authorities to take action. It was the power of social media that gave the anti-CAA/NRC a worldwide reach and the same followed when it came to the Black Lives Matter campaign. So, yes I am positive that this movement that we have started will definitely build pressure on the authorities and Rao would be discharged of all charges in no time, ” said Yashi Verma.

“We're not darbaaris but kavis. It's our duty to our art to speak the truth and stand for the truth, even at the cost of personal discomfort,” concludes Aseem who acknowledges that this step might replicate into streaks of political backlashes and sexual slurs, yet his voice shall remain undiluted. 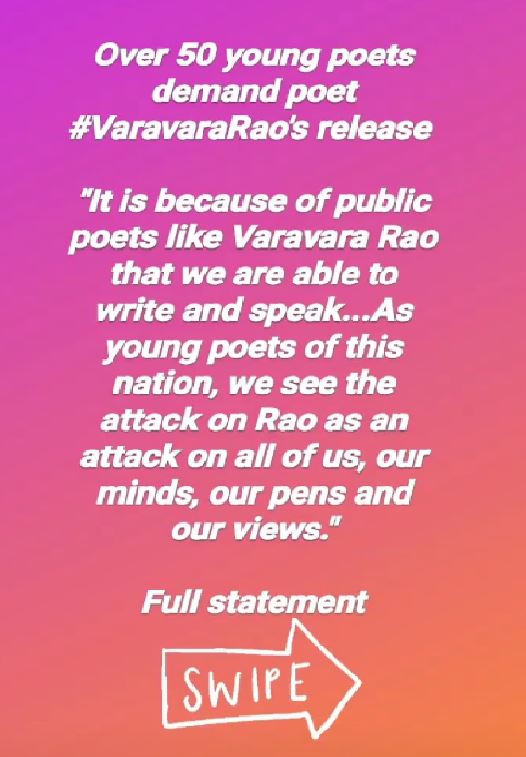 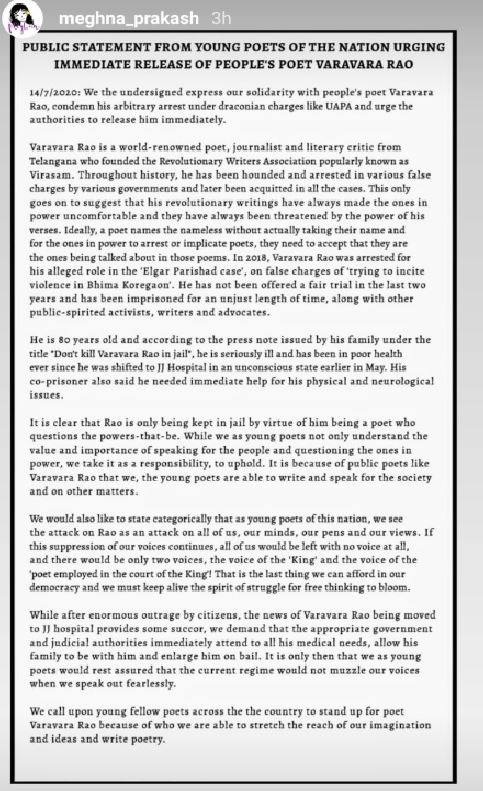 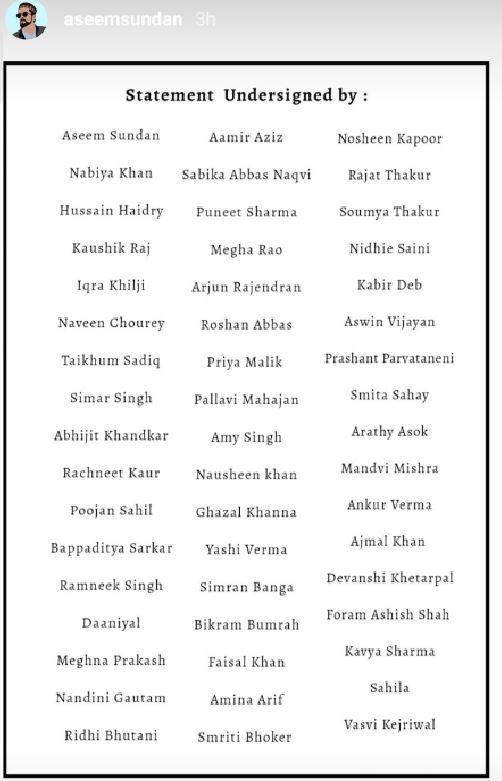