In the past few months, community radio stations have seen a spike in listenership

Although not a very popular form of broadcasting, community radio has proven to be the voice of the community. Apart from disseminating knowledge among local communities and bridging the gap between the government and marginalized population, these radio stations also play a critical role in disaster management. At a time when conventional media has struggled to reach the most isolated corners of India, community radio has emerged as a savior.

In early 2020, Kerala was the first state in India to get a Covid-19 positive case and one of the state’s community radio stations, Radio Mattoli, was quick to respond to it. The radio station is run by Wayanad Social Service Society situated in the Wayanad District in Kerala covering almost eight lakh people.

Father Bijo Thomas, the station head of Radio Mattoli, decided to suspend more than 80 programs and shift the focus to providing information on the pandemic. “We have conducted interviews and discussions with more than 40 officials including DSP and collector, to raise awareness and clarify the do’s and don’ts to stop the spread of the virus,” he said.

The programs were run in the local language Malayalam as well as the tribal dialect, Panaya and other languages like Hindi, English, Oriya, Kannada, and Tamil. The radio station also invited doctors to talk about the importance of handwashing, social distancing and wearing a mask.

Community radio serves as an information bridge between the government and the public in remote areas. In Assam, Bhaskar Bhuyan, station head of Radio Brahmaputra located in Maijan Borsakia village, made programs on Covid-19 a priority. With the help of both the District Administration and District Health Department, various programs pivoting around the global pandemic were broadcast. “Our main aim of the show was to give information and knowledge on Covid-19 from authentic websites like WHO, UNICEF, MoH&FW.” The information was then translated into nine different languages including Assamese, Sadri, and Hajong.

Radio Bulbul of Bhadrak District received hundreds of phone calls from Mumbai, Delhi and Bangalore from migrant laborers who were stuck. “Our District administration had put up camps to distribute dry rations and informed the migrant laborers about the ration through our broadcast,” a representative told The Citizen. Radio Bulbul has two special programs namely Kar Bhala Toh Ho Bhala and Katha Re Katha Re centered around Covid-19. Kar Bhala Toh Ho Bhala featured 21 programmes on social distancing, importance of blood donation and many more. 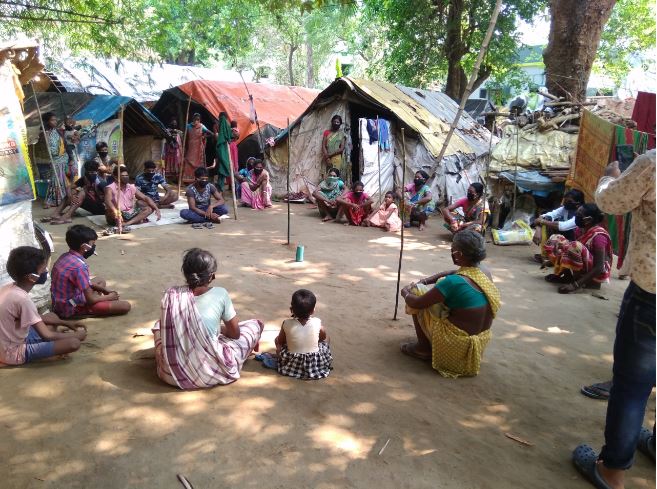 The Gurgaon based radio Gurgaon Ki Awaaz saw a huge surge in listenership in the immediate aftermath of the first lockdown on March 24, 2020. “We had a huge surge in our listenership as people wanted to know about government regulations during lockdown, which were changing every day,” said station director Arti Jaiman.

By the second lockdown the station's main concern was migrant laborers as they struggled to go back to their hometowns and were also deprived of livelihood, and therefore food. “The interface for registering for trains or buses back to their home states that the district administration had organized required a smartphone which many could not afford. At that time, we extended our help and started helping our listeners who did not have smartphones to register for transport back to their villages. We also started collecting names, village-wise, using Whatsapp and sent those lists to the person in charge of the District Red Cross which was distributing rations,” Jaiman said.

The special programs broadcast by these stations are also focused on mental health and well- being. Presently, Radio Bulbul and Gurgaon Ki Awaaz are broadcasting a program named Mission Corona in association with UNICEF. In the program, they invite COVID warriors such as doctors, nutritionists, and psychologists to discuss ways of coping with the present situation. “Many people are going through depression during the pandemic. Our experts interact with them and help them in how to cope with the situation” added Preity, the radio reporter of Gurgaon Ki Awaaz.

The nationwide lockdown resulted in the closure of schools and colleges. Radio Brahmaputra broadcast three special programs for children in Assamese and in Sadri for the tea garden workers community. The third program by the station revolves around the children in the anganwadis, which is recorded by the workers of anganwadi in their locality without coming to the station. The recorded program is then sent to the station for editing and it is then broadcast.

To stop the spread of misinformation, Radio Bulbul has provided its listeners with fact-checked information. “We engaged the District Collector and other government authorities who used our medium to reach out to the public and informed them about the important government announcements besides our own programs.”

In the past few months, most community radio stations have seen a spike in their listenership. The reason for this is that people trust their local radio stations, as they provide them with credible, local, informed news. A recent study, commissioned by the Association of Radio Operators for India (AROI), found that the radio industry has a listenership of 51 million people, which is nearly as much as television’s reach of 56 million and social media’s reach of 57 million. During the lockdown, radio has seen an increase of 23 per cent in its listenership.