Significance of August 5 in Modi’s Agenda

But will the strategy work?

It looks as if India’s Prime Minister Narendra Modi is trying to turn August 5 into a “Bharatiya” liberation day to commemorate the “successful” conclusion of two major Hindutva projects proclaimed as the epitome of Indian nationalism.

These are the abrogation of Art. 370 vis-à-vis the Muslim majority State of Jammu and Kashmir, and the Bhoomi puja for the construction of the Ram temple in place of the Moghul-era Babri mosque in Ram’s birthplace at Ayodhya. Both events are associated with August 5.

It was on August 5, 2019, that Modi “quelled Pakistan-sponsored terrorism and unrest” in Jammu and Kashmir (J and K) and integrated the Muslim-majority area more firmly with India by abolishing Art 370 and 35A of the Indian constitution. The said articles had given the disputed area some autonomy in law making and administrative action, not enjoyed by other Indian States.

But on August 5, 2019, Jammu and Kashmir and Ladakh were deprived of “Statehood” and made Union Territories instead, to make them centrally administered territories. The BJP’s legions would tom tom these actions as the annihilation of Islamic separatism and terrorism and celebrate the day annually.

By inaugurating the construction of the Ram temple in Ayodhya in place of the demolished Moghul-era Babri Mosque with a Bhoomi puja on August 5, 2020, Modi hopes to tell the majority Hindus that he had made their 451 year old dream of building a temple to Lord Ram at the site he was born but arrogated by a Muslim conqueror, come true.That would also be tantamount to symbolically ending centuries of Muslim political hegemony over the Hindu majority.

Eclipse of Lutyens’ Delhi
And to create an optical illusion of having humbled the erstwhile British rulers, and also to show fellow Hindus that Hindutva forces had fought for India’s independence from White imperial rule, Modi is building a new capital complex in New Delhi at an estimated cost of Rs.20,000 crore (200,000 million).

The complex is meant to overshadow the stately British-era administrative structures along the Central Vista known as Lutyens’ Delhi. With this, Modi would join a long list of builders of Delhi over centuries, which includes Sir Edwin Lutyens who built New Delhi in 1931, and the Moghul Emperor Shahjahan who built “Old Delhi” in 1638.

In the coming years, August 5, 2019 and August 5, 2020 will be days of rejoicing for the BJP and its Hindutva allies. Seeing the growing power and appeal of Hindutva, even Congress General Secretary Priyanka Gandhi and the Congress party in Madhya Pradesh and Chhattisgarh had welcomed the Bhoomi Pooja at Ayodhya.

Earlier too, the Congress party had been muted in its criticism of the abolition of Art 370 and 35A. It only pointed to the undemocratic and surreptitious way in which it was inflicted on the people of Kashmir and did not criticize the abolition as such. Likewise, criticism of the new capital project has come only from environmentalists, architects and legal experts, and not the Congress.

With August 5 getting salience in the Indian official calendar, August 15, 1947, which marks the end of British rule in India, may lose its shine and become a dreary annual ritual under BJP rule. This is because August 15 is inextricably connected with the rival Congress party which is generally accepted as the one which fought for and got independence for India from British rule. There is historical evidence that the Hindu right wing had lined up with the British.

Will The Strategy Work?
But will Modi’s strategy work? Anticipating criticism, Indian missions abroad have started putting out articles delineating the fruits of the abolition of Art 370 for the Kashmiris. The government claims that 170 e-MOUs worth INR 13,600 crore (US$ 1.9 billion) were finalized. In less than 5 months, till the end of January 2020, more than 15,000 metric tonnes of apples valued over INR 70 crores (about US$ 10 million) were directly purchased from farmers in the Kashmir valley. Central government ministers inaugurated 20,000 projects and 7,000 of these people-identified development projects were completed.

On the educational front, 50 new institutions with 25,000 vacancies had been established. New health infrastructure worth INR 7,500 crore (over USD 1 billion) and seven new medical colleges, five new nursing colleges and a state cancer institute are planned.

Contrary View
However, human rights organizations have a different story to tell. The bi-annual report on the situation in J and K by the Coalition of Civil Society said that from January 1 to June 30 2020, there were extrajudicial executions of at least 32 civilians, besides the killing of 143 militants. 54 armed forces personnel were also killed in firefights.

From January 1 to June 30, at least 107 Cordon and Search Operations (CASOs) and Cordon and Destroy Operations (CADO’s) were conducted. At least 57 encounters took place between Indian armed forces and the militants. The media continued to be at the receiving end of intimidation and harassment by the authorities. The first six months of 2020 witnessed the continuation of the ban on 4G mobile internet services, which were banned for the first time on August 5, 2019. There are reports that the J and K administration is denuded of Kashmiri Muslim officers.

Writing in The Telegraph India, retired Special Secretary of the Research and Analysis Wing (RAW), Anand Arni, says that there is no real normalcy and tourism and the lucrative apple crop had taken colossal hits. The facts on the ground are that there is a reduction in violence, but this is more a consequence of the state’s muscular policy and the tight security grid, he notes. “There is bewilderment that the government’s anger with Pakistan is now focused on the ordinary Kashmiri.”

Elections Without Candidates and Voters
Further: “The government’s attempt to create a new tier of politicians stumbled, if the panchayat elections held in December 2019 are to be any gauge. Those elections saw no polling in a full two-thirds of the seats - a third had no candidate and another third, with just a single candidate, went uncontested. There are lessons here – that anger and fear of the militants still holds.”

“Politically, there is a vacuum. The Abdullahs (father Farooq and son Omar both former Chief Ministers) have been released whereas Mehbooba Mufti (another former CM) remains under house arrest. Though there are dark hints that there is a deal, there are also reports of the opposite – that a worried government released the Abdullahs to ensure that the cadre-based National Conference (NC) did not wither away and leave a vacuum. After all, it was the NC and the Congress which were the frontline against the Jamaat-e-Islami in the 1980s,” Arni notes.

On the abolition of Art 35A Arni says that Hindu Kashmiris have also been the losers, not only the Muslims, as Art 35A had reserved local employment in government service and educational institutions for locals.

“The Dogras are uncomfortable with the revocation of Article 35A which allowed the state legislature to define the permanent residents of Jammu and Kashmir. Article 35A was revoked at the same time as Article 370 and the Dogras are concerned that its abrogation could result in ingress from the outside and lead to a loss of access to employment. Even in Ladakh there is similar concern that the withdrawal of domicile laws and its impact on job will be at the expense of the Ladakhi.” According to one report, 25,000 outsiders have been given Citizenship Certificates after August 5, 2009.

China Becomes A Factor
Given China’s hold over Aksai China in Ladakh, which India claims as being part of Ladakh, Arni says that there are reports that the Chinese build up across the Line of Actual Control in Galwan Valley began a month after the abrogation of Art 370.In October 2019, during Pakistan Prime Minister Imran Khan’s visit to Beijing, a joint statement and mentioned UNSC resolutions on Kashmir. “China has, in a sense, now made itself a party to the Kashmir conflict.”

This opens up the possibility of China and Pakistan cooperating in any military confrontation with India, forcing India to fight an unaffordable two-front war. 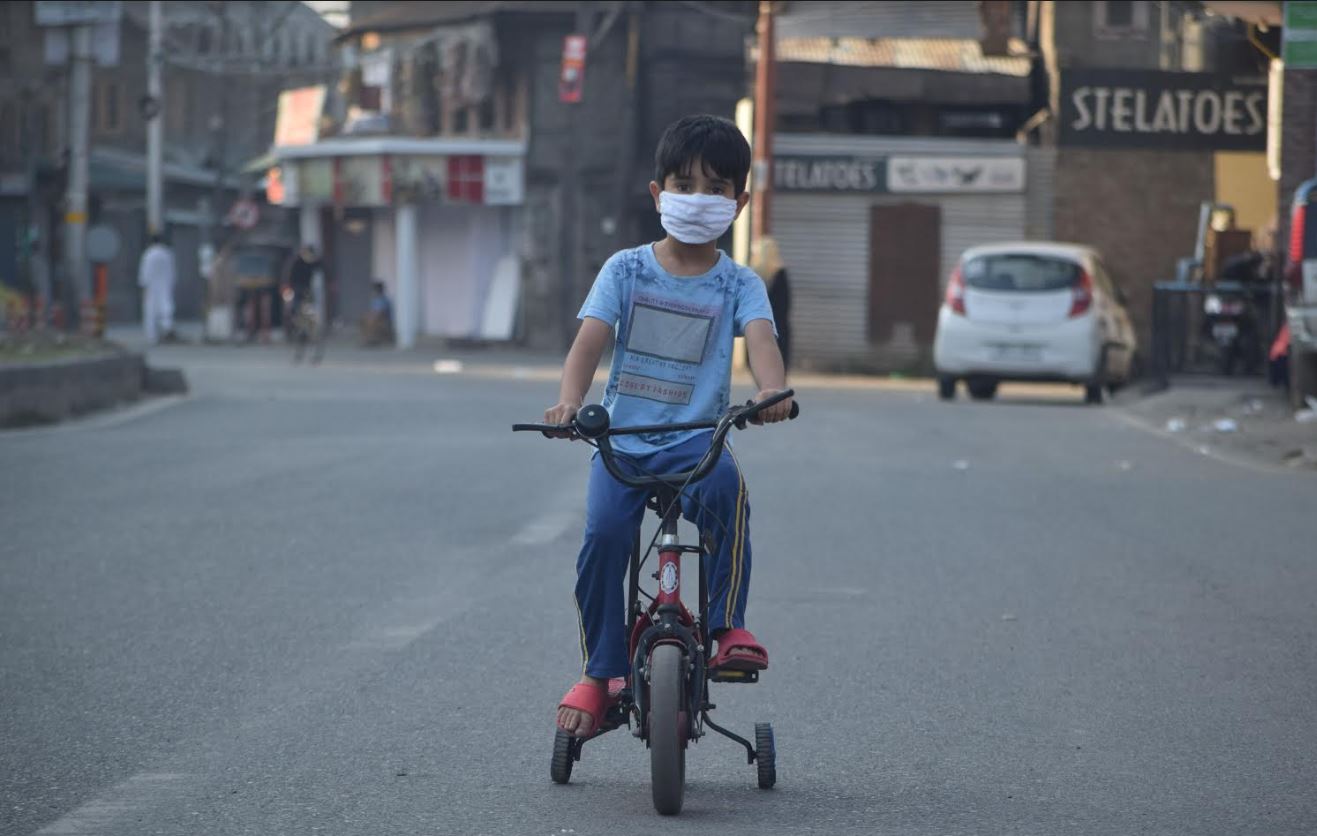