The Citizen stands by The Caravan and strongly condemns the assault on the journalists and on the freedom of the press. This is a horrific attack and we reproduce The Caravan’s account below for readers to get a full sense of what happened while the journalists were doing their job. We are still waiting for the Editors Guild of India to break its silence:

On 11 August, three journalists working with The Caravan—Shahid Tantray, Prabhjit Singh and a woman journalist—were beaten, subjected to communal slurs, threatened with murder, and sexually harassed, while reporting in Subhash Mohalla, in northeast Delhi’s North Ghonda neighbourhood. Immediately after the attack, Singh and the woman journalist filed complaints at the Bhajanpura police station.

On the afternoon of 11 August, a mob assaulted three journalists working with The Caravan, in Subhash Mohalla, in northeast Delhi’s North Ghonda neighbourhood. The journalists were reporting on a story concerning a Delhi violence complainant. For around an hour and a half, the journalists—Shahid Tantray, Prabhjit Singh and a woman journalist—were under attack, subjected to communal slurs, threatened with murder, and sexually harassed.

The journalists were taking photographs of saffron flags that had been tied in the area, when some men approached them and told them to stop. One of the men, who was wearing a saffron kurta and had a bandage on his arm, identified himself as a “BJP general secretary.” He asked Tantray for his identity card. The mob launched their attack upon realising that Tantray was Muslim.

During her attempt to get away from the attack, the woman journalist faced sexual harassment from a middle-aged man who exposed himself to her. Later, the mob attacked her as well. To ensure the safety of the journalist, The Caravan is concealing her identity.

The attack began at around 2 pm, when a mob of locals—men and women—surrounded the journalists, and then began assaulting them after learning of Tantray’s Muslim identity. During the attack, the woman journalist extricated herself to get out of the lane through a gate. The mob soon locked the gate behind her, capturing the other two journalists inside.

As the attack was ongoing, the woman journalist pleaded with the attackers to let her colleagues go, a man with a crew-cut hairstyle, who had rakhis tied around his wrist, pulled at her clothing to try and drag her inside. The woman journalist ran from the lane to a neighbouring one. As she sat on a slab to compose herself, young men surrounded her. The men, who looked to be in their early twenties, began taking photos and videos of her, and “making cheap and lewd comments and started saying ‘Dikhao, dikhao’”—“Show, show.”

The woman journalist recounted these events in a detailed complaint to the police, filed immediately after the incident.

As she walked away, “a middle-aged man in a dhoti and a white t-shirt, with a bald head and a slim pony-tail stood in front of me,” the woman journalist noted in her complaint. “He then opened his dhoti and exposed his genitals while looking at me. He proceeded to shake his penis with his hand and started making objectionable and lewd expressions, while laughing at me.”

After running away from the man, she received a call from Tantray, asking her to come to the Bhajanpura police station. By that time, Tantray and Singh were being taken to the station by the police. As she was asking for directions to the station, the mob found her again and beat her.

At the lane where the attack had begun, Singh recounted that a crowd of around twenty people had already assembled at the area even before the saffron-clad man asked to see Tantray’s ID card. He informed the crowd that the three journalists were members of the press and were not doing anything illegal. “We are only taking photos of the lane, not inside anyone’s house,” Singh told the crowd. “Any journalist would take these photos if they saw so many saffron flags.” But the crowd did not relent. The man in saffron told them, “Tumhari tarah fattichar patrakar bahut dekhe hai”—I have seen many wretched journalists like you. “Main BJP general secretary hun, humaara kuch nahi bigaad sakte tum”—I am a BJP general secretary, you can’t do anything to us.

Tantray said that when the man saw his name on the press card, he exclaimed, “Tu toh kattua mullah hai”—he identified Shahid as Muslim, and used “kattua,” meaning circumcised, and “mullah,” meaning a Muslim man. Both terms are commonly used as slurs against Muslims.

The man immediately began calling other locals, and within minutes, the crowd had swelled to around fifty people. “The crowd became really aggressive and numbers increased rapidly after seeing Shahid’s ID,” Singh said. They began hurling communal abuses at Tantray.

For nearly ninety minutes, the mob surrounded the two journalists and shouted communal slurs at Tantray, while also repeatedly and aggressively manhandling, slapping and kicking him. When Singh tried to intervene, they kicked him as well.

The mob threatened to break the camera the journalists were using, at which point Tantray offered to delete all the pictures he had taken. The woman journalist, who had escaped from the lane to the other side of the gate, had taken the camera from Tantray, fearing that the mob would break it.

After the mob permitted him to move till the gate to take the camera, she handed it back to him, over the gate. He deleted the photos. When the mob persisted with its threats to break the camera, Tantray was forced to give up its memory card. But the mob did not relent, and continued to hit the journalists. “They strangled me with the strap of the camera while others hit me,” Tantray said.

In the police complaint, Singh noted that members of the mob screamed, “Mullah saala kattua” and “Saale jaan se maar denge”—We will kill you, fucker. Then, two police men arrived at the scene—an additional sub-inspector, Zakir Khan, and a head constable, Arvind Kumar.

“They tried to intervene and pacify the violent, abusive mob,” Singh noted in his complaint. “But the man in the saffron kurta started provoking the women against us. Two women began snatching Shahid’s camera. The mob was uncontrollable despite the presence of policemen.”

Ultimately, more police officials arrived at the scene and they were able to take the two journalists away from the mob. Even as they were being taken away, members of the mob protested. One of them shouted out, “How can you take them away like this?” A police official responded, “We’re taking them to the station. We’ll question them there.” Tantray and Singh were then taken to the Bhajanpura police station, where they wrote a complaint about the incident. In it, Singh observed, “Had I not been there, the mob led by that saffron kurta clad man would have lynched Shahid for his Muslim identity.”

It was after the police took the journalists away from the mob that Tantray had phoned the woman journalist. The mob found her as she was attempting to find her way to the Bhajanpura station. She noted in her complaint that when she was asking for directions to the station, she “saw a mob of 3 women and 2–3 men, pointing towards me and charging in my direction. I started running away. As I was running, I fell, and the mob caught on to me.” The attackers immediately began pushing her around while beating her. “All of them started hitting me on my head, arms, chest, hips.” She recognised the man in the saffron kurta by the bandage on his arm. She had seen him as part of the mob earlier as well.

As the mob continued to attack her, the woman journalist saw a policeman and rushed to him. “This policeman tried to trivialise the situation and told us to resolve the dispute verbally, among ourselves,” she recounted in her complaint. As she pleaded with that policeman for help, another official approached the spot. The second policeman took her to Bhajanpura police station, where she filed a complaint.

The three journalists were conducting follow-up reporting on a recent article by Singh and Tantray, about a woman complainant in a case related to the Delhi violence, who had accused police officials at the Bhajanpura police station of beating and sexually assaulting her and her 17-year-old daughter on the night of 8 August. The complainant had visited the police station that night to seek the registration of a first information report against a complaint they had filed two days earlier. On the intervening night between 5 and 6 August, Hindus from the locality had raised communal slogans and tied an RSS flag at the gate to the Muslim side of the neighbourhood as part of their celebration of the stone-laying ceremony for the Ram temple at Ayodhya. The police gave the women a signed copy of the complaint, but when the women demanded a first information report, police personnel thrashed and sexually assaulted the complainant, her daughter and another woman.

The police personnel at the Bhajanpura station refused to register FIRs against the complaints filed by the journalists as well. Ashok Sharma, the Bhajanpura station-house officer, told The Caravan’s staffers that the locals accused of assaulting the journalists had also filed a complaint, and that the police would need to examine both sides’ complaints before registering an FIR. It is unknown what allegations the locals raised in their complaint.

Since the violence and even during the national lockdown to curtain the spread of the coronavirus, The Caravan has been at the forefront of reporting on the targeted attacks on Muslims during the Delhi violence, and the police complicity in the same. In a series of investigative reports on complaints by Muslim residents that the police had not acted on, published in June and July, Singh reported that BJP leaders and senior police officials had been accused of participating or orchestrating the violence.

In a video story, Tantray, alongside another journalist, reported the testimony of a Hindu rioter who spoke candidly of committing arson and assault on Muslims during the violence, and noted that the police had encouraged Hindu rioters to attack Muslims. In another report for The Caravan, Tantray and a colleague reported the story of a Muslim man who lost one eye to a bullet injury during the violence, and the gaps in the Delhi Police’s investigation into the case. We are committed to continuing our coverage on the communal violence in northeast Delhi. 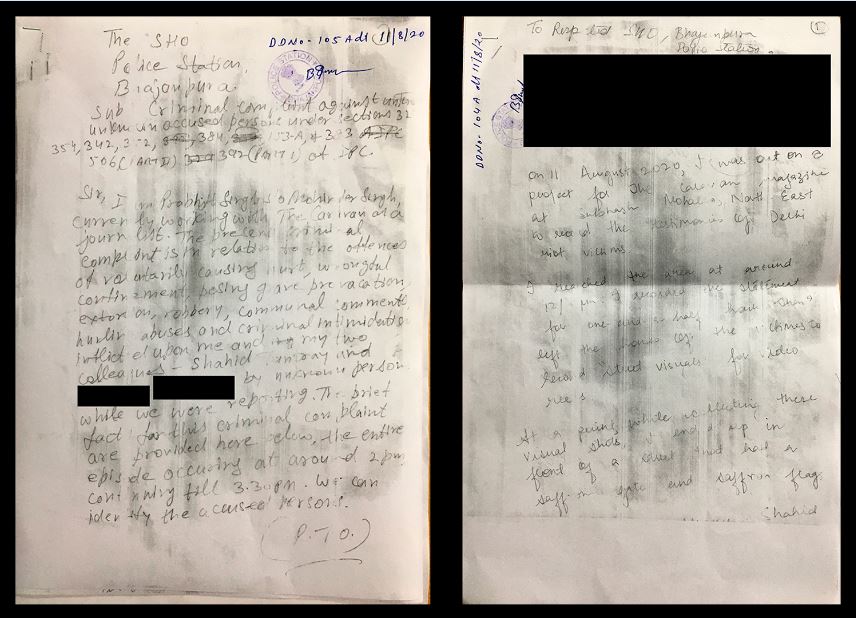