Lifting the Veil of State Secrecy, One Application at a Time

BEAWAR: A sitting Chief Minister’s resignation, a fourteen-year-old girl questioning a Prime Minister on the lack of initiative in cleaning the Ganga, and a poor widowed woman living in Ambegaon village of Pune district in Maharashtra receiving her pension – all of these have one thing in common: The Right to Information Act 2005.

The RTI has emerged as one of the most powerful laws of India since its inception. It has empowered ordinary citizens in not just accessing their basic welfare rights but also in holding powerful state officials accountable. Tilting the balance of power in favour of citizens, the RTI has forced greater transparency in Indian governance.

This mighty law had a humble beginning in the tiny village of Devdungri in Rajsamand district of Rajasthan, which is 352kms away from Jaipur, the capital city of the state. Devdungri is home to the headquarters of Mazdoor Kisan Shakti Sangathan (MKSS), the organisation that led the long and non-violent movement for RTI in India. Founded by Aruna Roy, Nikhil Dey and Shankar Singh, this movement stretched for more than a decade before attaining success through the enactment of RTI on October 12, 2005. In 2020, this crucial law completed its 15 years.

The demand for the RTI arose from labour issues. The MKSS began its work for labour and peasant rights in 1987. They started demanding from state officials that labourers be provided employment in public work projects with full minimum wages, and faced stiff resistance from state officials. In their struggle, they ended up unearthing several forms of corruption in the state administration.

MKSS’ reputation as an organisation that worked for the poor often led individuals like Kesar Singh to approach them for help. After retiring as a hawaldar from army, Kesar (69) settled down in his native village Baghmal and purchased a tractor and trailer to supply construction materials to government agencies of Asan panchayat, in Jawaja block of Ajmer district.

Though he had started the business with great expectations of not only supplementing his pension but also providing a regular occupation, his hopes were soon dashed. It seemed impossible to get payments from the government. He had to knock on the doors of the entire chain of district administration starting from the block development office in Jawaja, to the sub-divisional magistrate office in Beawar and the collector of Ajmer district, to get his rightful payment. But to no avail. All they gave him was assurances, but he could not see any sign of the payment. Finally, in 1994 in frustration he sought help from MKSS. MKSS activists then accompanied him for a meeting with the BDO, but Kesar received a rude shock because that official flatly denied ever having employed him.

Stonewalled by the administration, Kesar and the MKSS’ adopted a new approach. They now began a thorough search of records to unearth evidence of the services Kesar had provided to the public agencies. His case, they eventually found, was only the tip of the iceberg. The search revealed multiple instances of public funds being siphoned off through fake names and incorrect facts.

For instance, the records showed that Asan panchayat had employed the services of a camel cart instead of Kesar Singh’s tractor for receiving materials even when multiple witnesses vouched in favour of Kesar Singh. “Yahaan toh kaagaz hi jhoot bol rahe the (the papers were lying)”, in the words of Shankar Singh, one of the founding members of MKSS. After coming across several such instances of a mismatch in records and reality, MKSS decided that there was only one way to effectively check corruption on this scale and the siphoning of funds – instituting a law to force the government to share information with the public or what is known as the right to information (RTI) or Jan Soochna Adhikar.

With that began a series of dharnas (sit-ins), the first of which was held in the town of Beawar on April 6, 1996. Beawar is the nearest urban centre to Devdungri and was chosen by the MKSS for scaling up the campaign for RTI. The roundabout of the Chang gate was chosen strategically for this dharna because it is right in the middle of Beawar’s busiest market. MKSS’ choice paid off as this dharna catapulted the RTI movement to the national stage.

Knowing the reluctance of the administration an indefinite dharna was planned. The government yielded after 40 days by announcing the setting up of a committee to formulate the law. But the activists had to resort to another spell of dharna – 53 days this time in Jaipur – as the government dragged its feet by refusing to make this committee’s report public. This time the dharna ended only when the state government conceded the demand of the MKSS and agreed to enact a law at the level of the Panchayati Raj.

The dharna in Beawar could not have succeeded without local support. Ashok Sen, now 60, for example provided critical logistical support. The dharna, he recalls, was indefinite and they had no idea how long it would take to persuade the authorities to accept their demand. “So, when we went to arrange for the tent, we didn’t know how long we would need them. Finally, it was decided that we would hire it for 100 days. In those days it cost us a whopping sum of Rs. 3100,” recalls Sen. 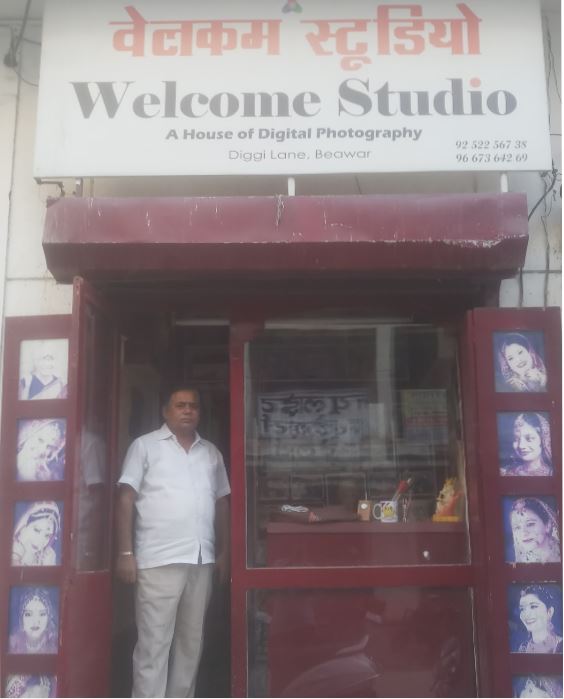 A photographer by profession, Sen’s pictures helped document the dharna. Pointing to the portraits of Roy and Dey hanging in his shop, he proudly told this writer that he found “a beautiful second family in MKSS through this movement.” When asked whether he faced any difficulty in balancing his responsibilities towards his family and his role in the movement, Sen replied, “on the contrary, my wife and mother were very supportive and would often ask me during those 40 days if anyone from the dharna would be coming home for dinner”. Many other residents of Beawar extended support to the dharna by not just contributing both in cash and kind but also regularly joining the dharna.

Another native of Beawar, Ramprasad Kumawat provided media support for the Beawar movement by giving the dharna extensive coverage in his local Hindi language news sheet, ‘Nirantar’ though he was never a member of the MKSS. His coverage played a critical role in building the momentum for the dharna in its initial days. When asked what made him cover the dharna at a time when other local journalists were not keen to do so, he responded with great wisdom, “information is crucial for a journalist’s profession. It was natural for me to cover this movement”.

Beawar has inherited a legacy of pioneering radical legislation aimed at empowering the common Indian. For example, legislation to abolish the zamindari system was based on the Rajasthan tenancy act, 1955, whose architect Brij Mohan Lal Sharma, was a native of Beawar. He was a minister in the Ajmer government (before the reorganisation of states and the formation of Rajasthan) and was even consulted by India’s then home minister, Pandit Govind Ballabh Pant to help draft a similar land reform law at the national level. Sharma’s sympathy for the downtrodden was also evident in several laws favouring labour rights in Rajasthan.

Even before independence, Beawar and its surrounding areas have stood their ground in the face of arbitrary state power. Beawar city was founded by Colonel Charles George Dixon in 1836. Colonel Dixon is credited with subduing the rebel Kathat tribes of the area and establishing a cantonment town in the city. Up until then, Beawar had resisted becoming a part of the royal states of Udaipur, Jodhpur and Jaipur.

Once established as a town, Beawar began to prosper as an industrial town. The first cotton mill of Rajputana area, the Krishna Mills, was set up in Beawar in 1889. Its owner Seth Damodardas Rathi was an ardent supporter of India’s freedom movement. He provided essential financial support to freedom fighters. Swami Kumaranand (Dvijendra Kumar Naag), freedom fighter and Congressman turned Communist, carried out most of his activities in and around Beawar and was a contemporary of Sharma. The peasant movements of Bijolia and Shahpura are well known examples of people’s resistance that emerged from Beawar. This historical legacy makes it evident why a law like the RTI which aimed at empowering the citizen and checking arbitrary exercise of state power found the wholehearted support of the city. 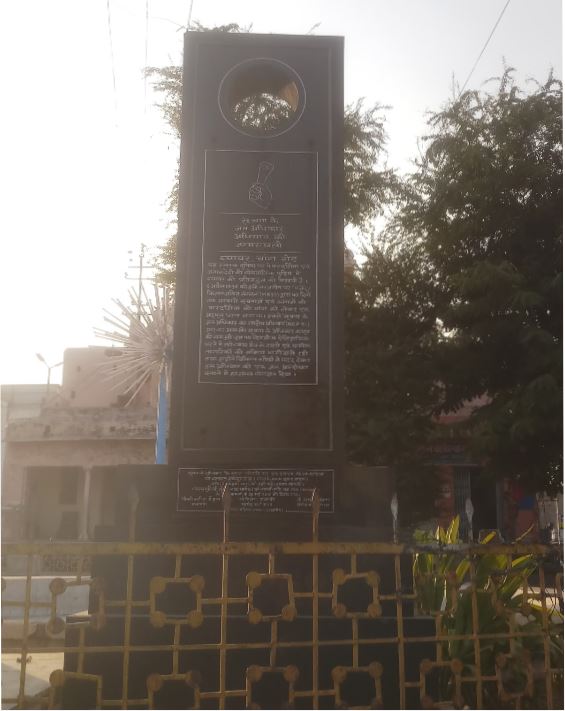 Beawar’s contribution to the RTI has been carved in stone in the shape of a monument commemorating the RTI Act and that historic forty-day dharna. The granite monument was erected at the roundabout of the Chang gate of Beawar on May 26, 2016. Designed by Aruna Roy and Vinay Jain, the monument is cut out of a black granite stone with the details of the movement written on it. The light that passes through the empty circle of the monument symbolises a ray of hope for more transparency in Indian governance.

This idea of setting up the RTI monument in Beawar emerged from the city’s residents. They were keen on establishing their city’s reputation as an ‘RTI city’. “Beawar is well known for its til-patti or til-pappad (chips made of sesame). We wanted the city to be also known by this law that we have given to the country” says Ashok Sen.

At a time when urban development around the world is obsessed by the notion of a ‘smart city’ based on digitisation of city infrastructure and increasing state surveillance, the idea of a ‘RTI city’ shows the way for lifting the veil of secrecy behind which state officials all over the world have a tendency to hide.