The two month long agitation of the farmers in Punjab, Haryana, Uttar Pradesh and other states is finding resonance abroad, particularly in countries where the Punjabi diaspora has a significant presence.

The farmers’ movement with the Dilli Chalo call has received maximum support in Canada, where the diaspora has come out with a social media blitz of sorts with political parties there feeling the pressure from the Punjab migrants.

“The farmers’ movement in India and particularly Punjab has led to certain important developments that have been recorded for the first time even here. For example, this is for the first time that the politicians of almost all the mainstream political parties in Canada are taking a clear stand. Many of them have come out in support of the farming community. This includes those from the Conservative Party, Liberal Party and New Democratic Party (NDP). This is relevant because most of the politicians have generally refrained from coming out openly on developments in India, particularly in the last six years,” pointed out political commentator and author Gurpreet Singh.

This can be gauged from a series of tweets from former premier of Alberta province Rachel Notley who has tweeted for the farmers under the hashtag #I Stand with Farmers.

NDP leader Jagmeet Singh is another one who has taken to the social media to express support and solidarity with the agitating farmers. He tweeted, “The violence perpetrated by the Indian govt. against farmers peacefully protesting is appalling I stand in solidarity w/ the farmers from Punjab and across India - and, I call on the Indian govt to engage in peaceful dialogue rather than violence.”

His party colleague Jack Harris wrote, “We are shocked to see the Indian government's suppression of farmers protesting new laws which will endanger their livelihood. Instead of using water cannons and tear gas, the Indian government needs to engage in open dialogue with farmers.”

The same is the case with Canadian mainstream media that has for the first time been giving prominent space to the developments on the farm issues in India that were earlier confined mainly to the media networks run by the India diaspora. The farmers’ agitation is being discussed and debated across prime television and radio networks besides the other media.

Another interesting aspect is that the trade unions and labour organizations, particularly those from the agro-food sector have also come out supporting the Indian farmers. Some of the unions had come out in support of the nationwide strike call given by Indian trade unions on November 26.

There have been protests outside the Indian consulate in Vancouver where people stood with placards supporting the farmers from Punjab and Haryana while maintaining social distance in accordance with the Covid-19 protocol.

Sources in Canada said that because of the rising cases of Covid-19, the support for the farmers is mainly being expressed online and through the media. But rallies and demonstrations are on the cards once the situation improves.

Over the last two months there have been voices raised through various Gurdwara platforms and events organized by progressive groups in support of the farmers fighting democratically and peacefully against the controversial farm laws.

At a rally held by Indians Abroad for Pluralist India (IAPI) on September 27 on the eve of revolutionary icon Bhagat Singh’s birthday in Surrey, the speakers had come out attacking the Indian government reportedly saying that not only have the attacks on religious minorities and political dissidents sharpened, but the rights of the farmers who are the backbone of India’s economy, are being stripped in the name of development. Without any consultation with the farmers, the government has brought an ordinance that badly affects the future of rural communities, as a result of which the people have come out on the streets in India.

Sources said that various organizations have even approached the Canadian Prime Minister Justin Trudeau and foreign minister François-Philippe Champagne to take up the issue of protesting farmers with their counterparts in India.

The issue of protesting farmers is resonating in other countries like Australia, Great Britain, New Zealand and United States as well.

Labour Party MP in Britain Preet Kaur Gill too took to the social media tweeting, “Shocking scenes from Delhi. Farmers are peacefully protesting over controversial bills that will impact their livelihoods. Water cannons, and tear gas, are being used to silence them.”

Sources say that the issue of farmers is being discussed at community platforms and support is being expressed openly. This has been going on for the last two months ever since the agitation against the farm laws started. There have been rallies in places like Auckland in support of the farmers.

Sources say that the diaspora is looking at the farmers protest as a collective movement across communities for saving the federal structure of India. The Punjabis are not looking at it as just a farmers’ protest but as a denial of rights to Punjab by the centre.

A large number of Indians residing abroad have been changing their profile pictures on the social media to express their support to the agitating farmers.

Some Indians residing in the United States are also sharing the videos and pictures of the protest by the farmers of Tamil Nadu at Jantar Mantar in 2017 where they sat with bones and skulls. The message being circulated is that the cause of the Indian farmer is common. 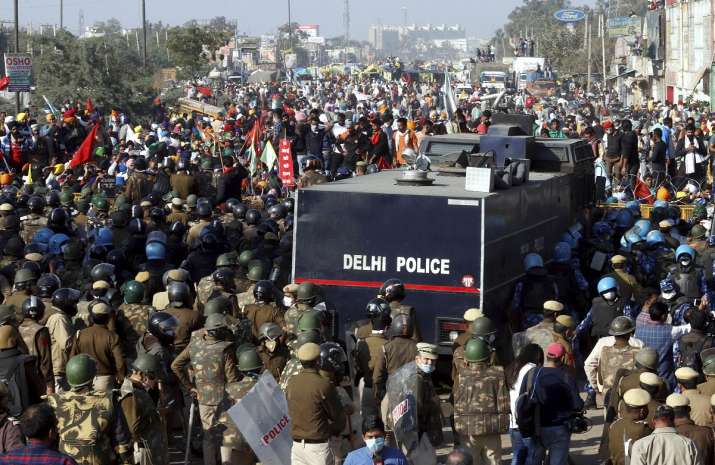