Why has Rajinikanth Thrown his Hat in the Ring?

Political preparations for the Tamil Nadu State Assembly elections slated for May 2021, have already begun in right earnest. The coming polls will be notable for three new factors, which could change the political scenario in the hitherto unchanging South Indian State.

For the first time in 53 years, elections will be held in Tamil Nadu without charismatic leaders being in the fray. The 2021 Assembly polls will be held after the demise of two stalwarts who had dominated State politics for decades. They were J.Jayalalithaa of the All India Anna Dravida Munnetra Kazhagam (AIADMK) who died in 2016, and M.Karunanidhi of the Dravida Munnetra Kazhagam who died in 2018. These two regional “Dravidian” parties had ruled Tamil Nadu since 1967.

Jayalalithaa and Karunanidhi had left their outfits in the hands of second-line leaders, Edappadi Palaniswami and O.Panneerselvam in the case of the AIADMK, and M.K.Stalin in the case of the DMK. For these second-line leaders, the 2021 polls will be the first State-wide polls they would be fighting without the benefit of having charismatic figures to lead the charge.

The second new factor is the entry of the Narendra Modi-led Bharatiya Janata Party (BJP) into the Tamil arena. Flush with a string of successes across the country outside the Hindi-heartland, the BJP is keen on capturing the South. It opened its account in Karnataka and is trying its level best in Telangana and Andhra Pradesh. It has now set its sights on Tamil Nadu which has been an impregnable bastion of the regional, anti-Hindi, and fiercely secular Dravidian parties, the very antithesis of the Hindutva BJP.

After its attempt to go it alone bombed in the last Tamil Nadu Assembly elections held in 2016 (it contested all the 234 seats and got none), the Central BJP leadership decided to align with the AIADMK, a party which is not so resolutely opposed to Hindutva and Centralization as the DMK. The BJP apparently feels it can use its political and legal power as the ruler at the Indian Center to brow-beat the weakened post-Jayalalithaa AIADMK into allocating a significant number of seats to it.

Though weakened by post-Jayalalithaa factionalism and a split in 2017 (when the Sasikala-Dinakaran group was expelled) the AIADMK is still a major factor in Tamil Nadu politics. It has been ruling the State continuously since 2011. Though anti-incumbency had set in due to the absence of Jayalalithaa since December 2016, its handling of the COVID pandemic has enabled it to retrieve its appeal to an extent.

On its part, the BJP finds it convenient to ride piggyback on the AIADMK to begin with. The AIADMK is currently led by lackluster persons who can be dominated by the BJP ensconced at the Center using the carrot and the stick. It could not do this when the plucky Jayalalithaa was the AIADMK head and Chief Minister. It cannot do this if the DMK is in power in Tamil Nadu.

The BJP cannot be in alliance with the DMK because the latter is an avowedly secular party, resolutely opposed to Hindutva. It is also committed to safeguarding States’ rights in the context of the Modi regime’s determined bid to centralize administration and policies.

Initially identified with the minority Brahmins, the BJP in Tamil Nadu is now wooing and recruiting the Backward Castes and politically important castes like Nadars and Thevars who are upwardly mobile and Sanskritizing themselves to enter the social elite.

The third new factor is the entry of Tamil cine superstar Rajinikanth. Admittedly not in good health due to a kidney transplant, he has publicly stated that the time has come for a total change in the political culture of Tamil Nadu. He has promised an end to the use of caste and religion in politics while saying that his rule will be based on religiosity (aanmeegam).

Rajinikanth has been toying with the idea of plunging into politics for a long time, using his huge fan following. But he has always backed out. This time, partly because stalwarts like Jayalalithaa and Karunanidhi are not in the field, he sees an opening for himself.

However, it is suspected that the BJP is pushing Rajinikanth into politics, overlooking his poor health, to serve its own needs. The actor’s entry into the electoral fray could help transform his fan club members into political cadres. The party, which he has promised to start at the end of this month, could then align with or merge with the BJP.

To the BJP’s advantage, Rajinikanth has often praised Narendra Modi and Amit Shah and has never made a secret of his Hindutwik tendencies. He could therefore be an attractive mascot for the BJP in the absence of any other charismatic local Tamil leader.

If Rajinikanth’s proposed party contests the 2021 elections, it could eat into the votes of the AIADMK and weaken it. When the AIADMK is thus weakened, the BJP will be able to bargain with it from a position of greater strength. At present, by portraying Rajinikanth as a threat, the BJP could persuade the AIADMK to allocate more seats to it and campaign hard for its candidates’ victory. In this context it is significant that the BJP’s Tamil Nadu-based intellectual (and its economist) S.Gurumurthy has heartily welcomed Rajinikanth’s decision to form a party and fight the 2021 polls.

That Rajinikanth is aware that he is in a cleft stick was evident in his media interaction. He swung from utter determination to field his party to expressing grave doubts about his physical fitness to be in politics. It will not be surprising if he finally decides to opt out as indeed he has done in the past. He is not made for politics. He leans towards Hindutva and nationalism but his ideology and political plans are yet to crystalize.

Unlike other cine-stars who had succeeded in politics, like M.G.Ramachandran and Jayalalithaa, Rajinikanth does not have a political party with dedicated and politicized cadres to back him. Matinee idol M.G.Ramachandran (MGR), was in politics from 1953 as a leading member of the DMK. When he floated the AIADMK in 1977, he was already a star campaigner for the DMK and a party Treasurer too. Jayalalithaa had been propaganda secretary under MGR and a member of the Rajya Sabha, the upper house of the Indian parliament. She had inherited the cadre of the AIADMK after MGR’s demise.

In contrast, what Rajinikanth has is only a network of fan clubs. Hence the doubt if he will be of any use even if he establishes a party and contests the 2021 elections. 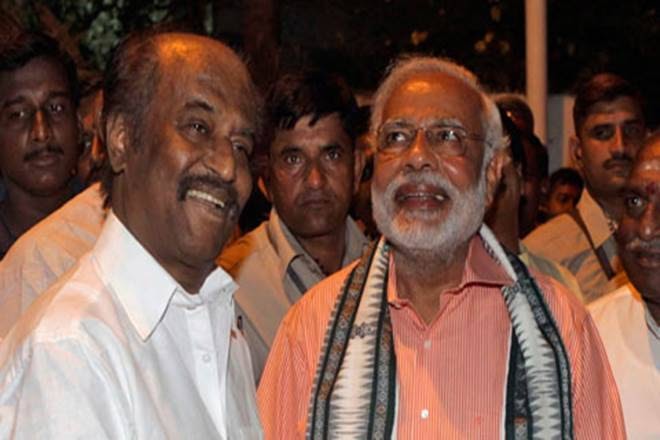