Police blockages to Singhu border start a kilometre before the actual Delhi-Haryana border. The border has a deployment of a variety of police forces such as Local police, Cyber police, Riot Control police, CRPF, and countless other camouflage uniforms that occupy an entire kilometre to keep the farmers from entering the city.

Dogs and horses have joined the army too. The forces have deployed a seven layer cement blockage with barbed wires. Signal jammers at several points, cyber police vans that are tracking most activity in the protest site and trucks filled with sand barricading the entire site, diffusing the viewpoint for protestors into the area occupied by the police.

The Delhi Government has donated over 30 porter potties for the protesting farmers with proper drainage into the sewers and cleaners with a sign “These toilets are for the guests visiting Delhi from Punjab, Sponsored by the Delhi Government”.

Since the past couple of years the Delhi Government has been found helpless when managing the city through protests over the past few years and sometimes found their own party people implicated in masterminding violence without much evidence.

In this protest site too, a focus has been on providing amenities to people almost in a utopic manner that present a working example of a civil society that is indeed run by the people, for the people and of the people. 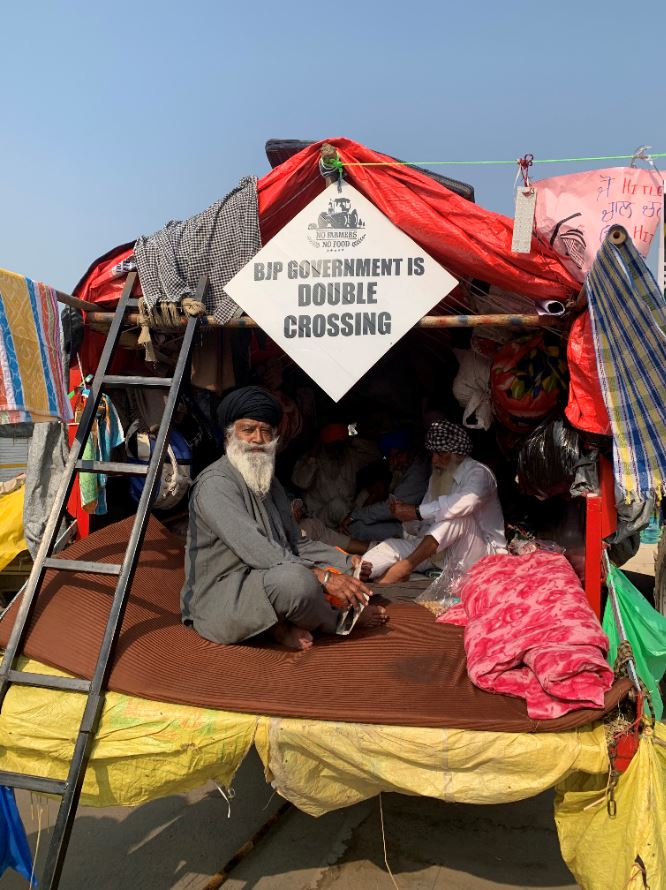 Some of the amenities include free food service through Langars at regular intervals of the several kilometre stretch. These langars are not only appreciated by the protestors but also the poor of the area who now get three daily meals.

Free medical services led by various organisations are splattered across the area some worthy of mention are Khalsa Aid.org and Akaal Aid, among other organisations. Ambulances are placed at an interval of 500 metres, with medications, masks, geriatric devices, etc.

A dishwashing and Laundry Service for all people are easily noticeable, a Library, and music are well placed in the protest site.

However one of the most radical amenities that this protest has provided to the peaceful protestors is an army of Nihang Sikhs for protection.

Nihang Sikhs are an armed Sikh warrior order known for their victories where they were heavily outnumbered. 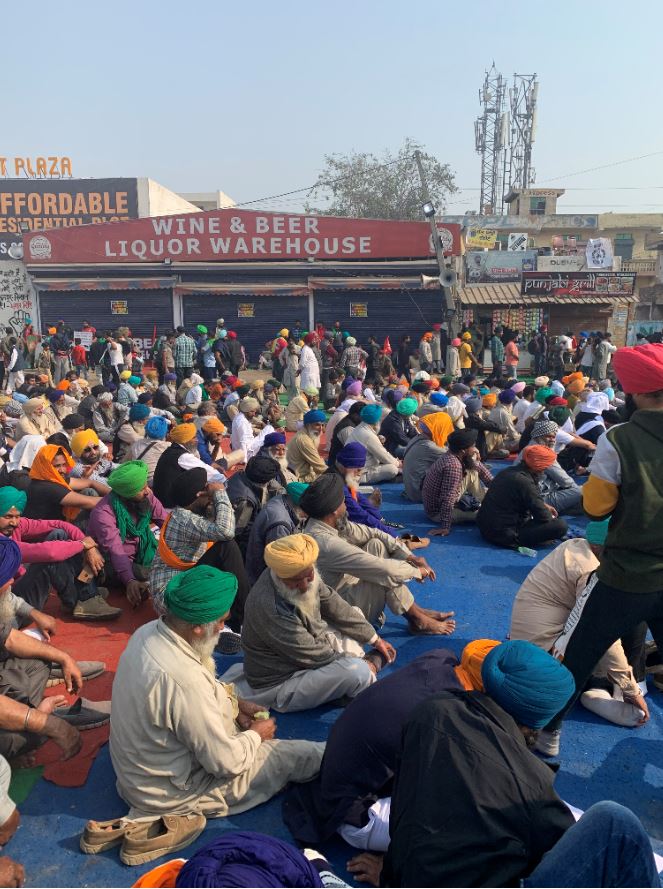 This is an ingenious addition, fairly recently, after a lot of disruptors of peace were noted entering the protest site to defile the genuinity of the protesting farmers. This was commonly noted in Shaheen Bagh and Jamia where young boys entered with arms to attack peaceful protestors, in front of a heavy police barricading.

As last year the Delhi Police was incapable of disarming the volatile youth, this year the protestors brought their own protection. This year’s disruptors were not only caught early, but also were publicly declared along with their political affiliations.

The protest site stretches over a few kilometres where farmers from Punjab and Haryana men and women both have driven to Delhi on their tractors and converted their trolleys into makeshift mobile homes. The farmers have already declared to the Central government of its plans to be prepared for a long arduous protest, with a straightforward agenda of removing all three agricultural acts passed in the parliament with no alternative negotiations.

With that intent in mind it becomes interesting to note all the political metaphors that get employed in protests of this scale. While Effigies of Modi have been burnt, other leaders and celebrities such as Hans Raj Hans, Kangana Ranaut, Rajnath Singh, Amit Shah and Payal Rohatgi are publicly condemned. 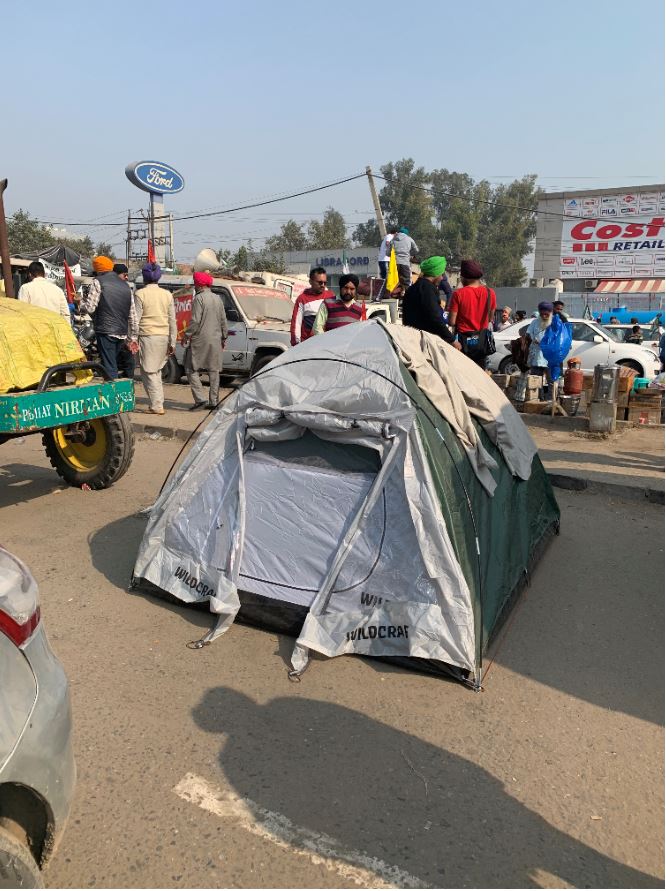 When invited for talks, the All India Kisan Union insisted on full representation of all units leading the protests and representing the farmers in the meeting. They wanted to meet the government on a level playing field where they did not want to be outnumbered by bureaucracy.

In an iconic turn of events the farmer representatives have refused any food or water in these government meetings with a clear message to remain focused on their mission and also to send a cultural message to the government of their preparedness for a long and committed struggle. Furthermore in recent meeting the farmers have even help placards to give clear answers in yes or no to the government and avoid being misrepresented due to a language gap.

After six failed talks with the central government the All India Kisan Union maintains their unified stance on the repeal of all three acts without any interest in amendments of any kind.

In response to the last failed talks they held a press conference today to deploy their next strategy for the government to consider their single demand. They have clearly mentioned that their protest will intensify and become more pointed towards the people who are the direct beneficiaries of these ‘black laws’.

The following are their immediate steps:

-All farmers to boycott and unsubscribe all kinds of Jio Connections

-On Monday 14th December Protests outside all Zila Headquarters in Delhi, Punjab, Haryana, -UP, MP, Rajasthan, Tamil Nadu, and other states in favour of the farmer’s protests

-Jaipur Delhi highway will be blocked till December 12

-Adani, Ambani products and institutions to be boycotted

The farmers are settling down for the long haul, as the leaders determine the strategy for the coming weeks and months. 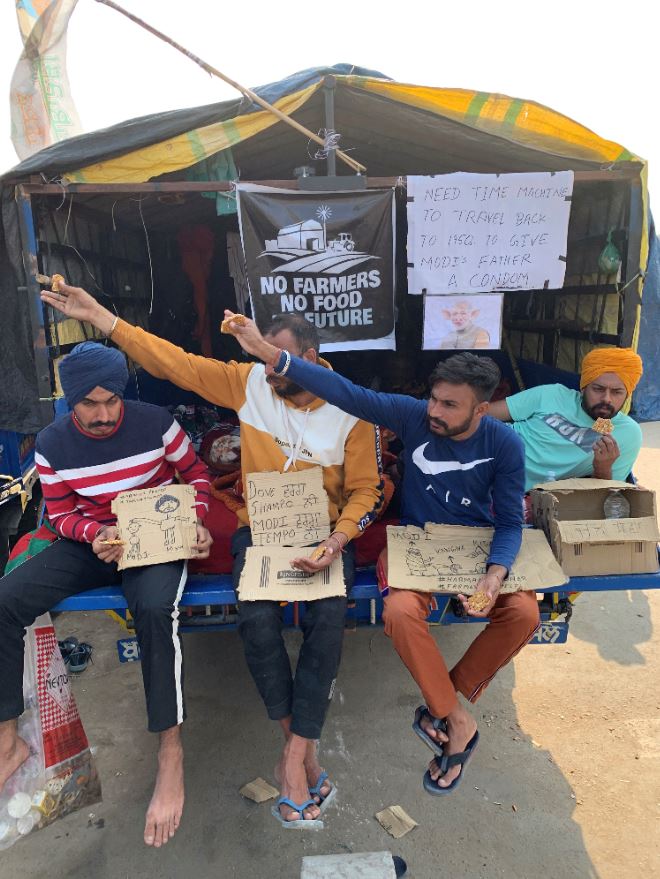 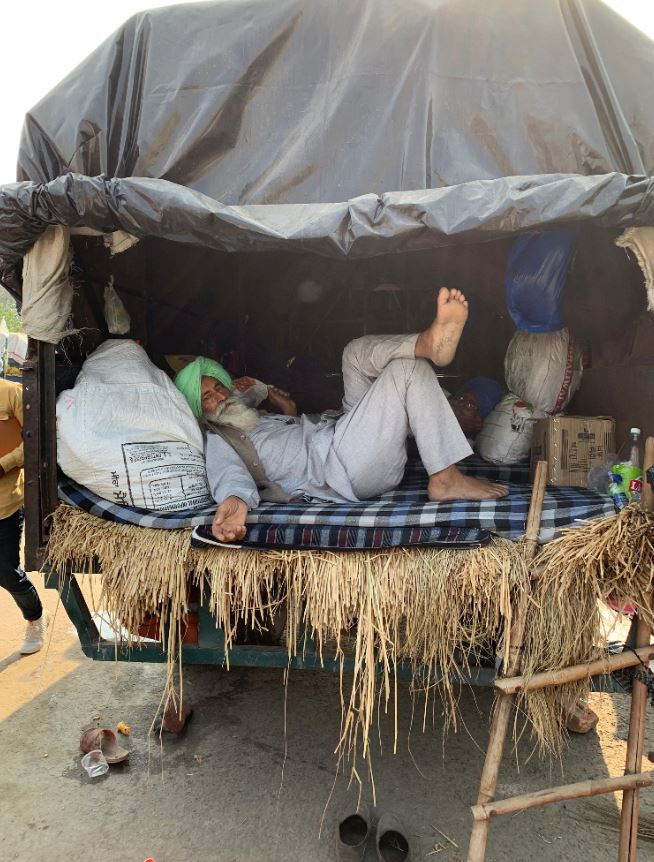 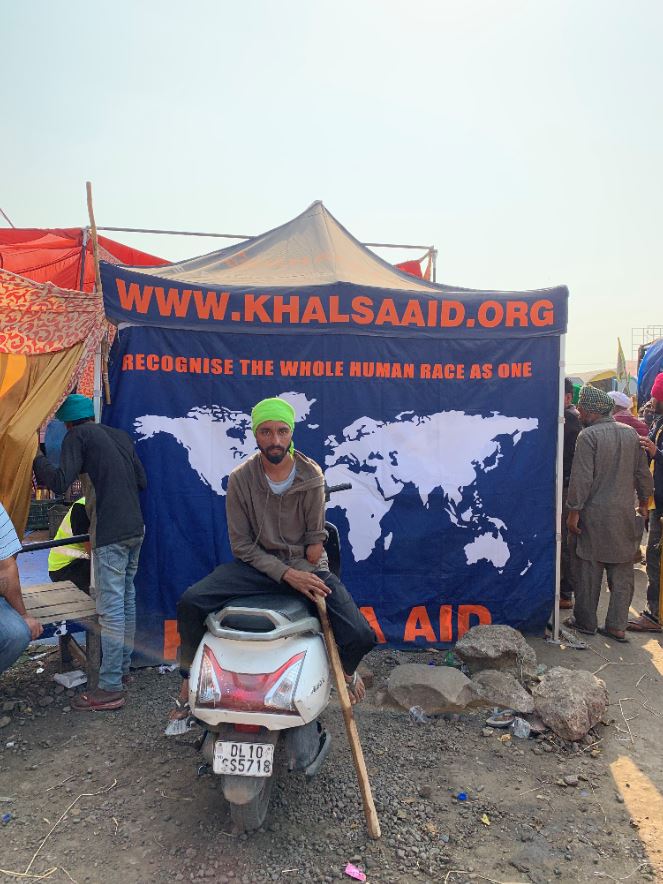 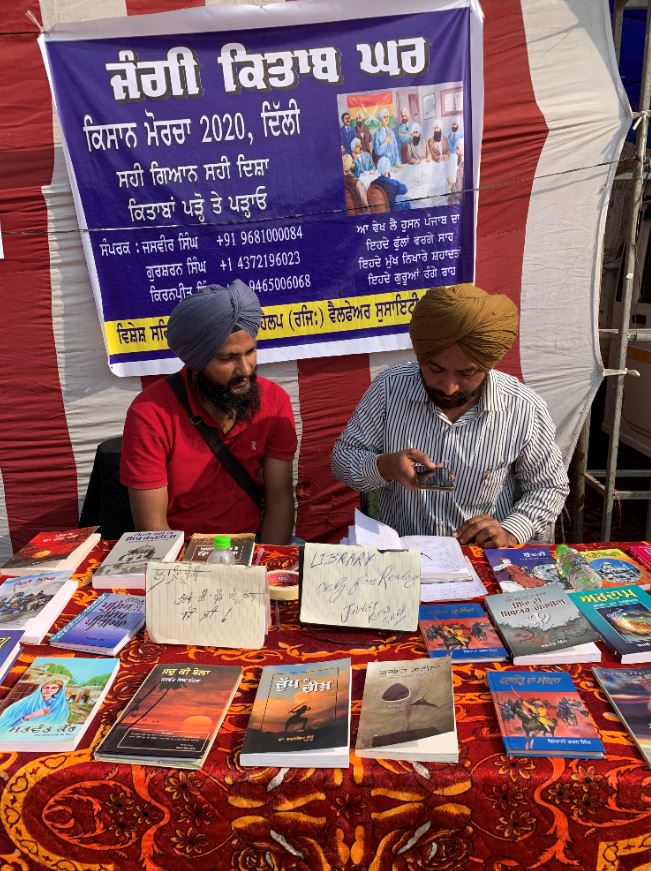 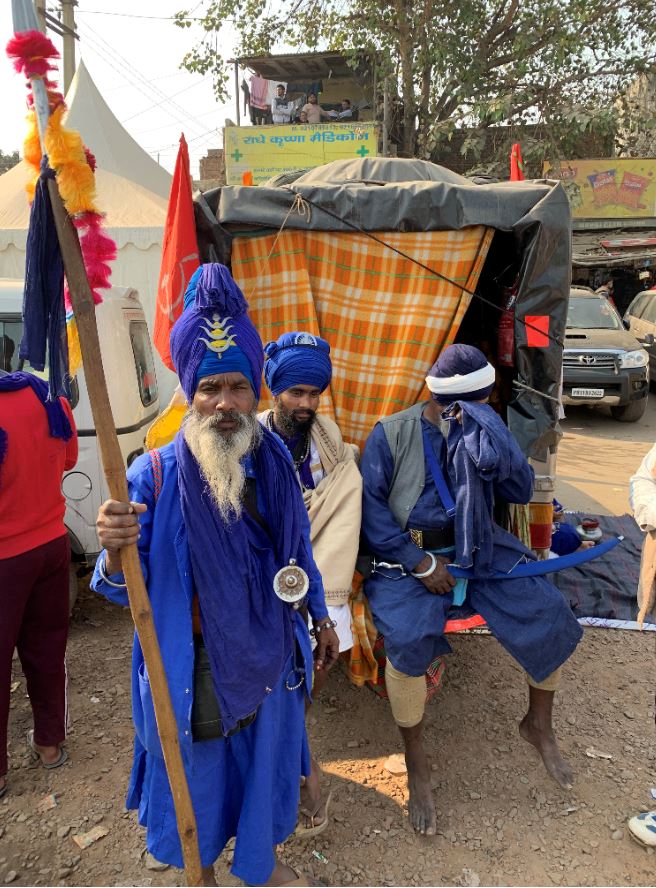 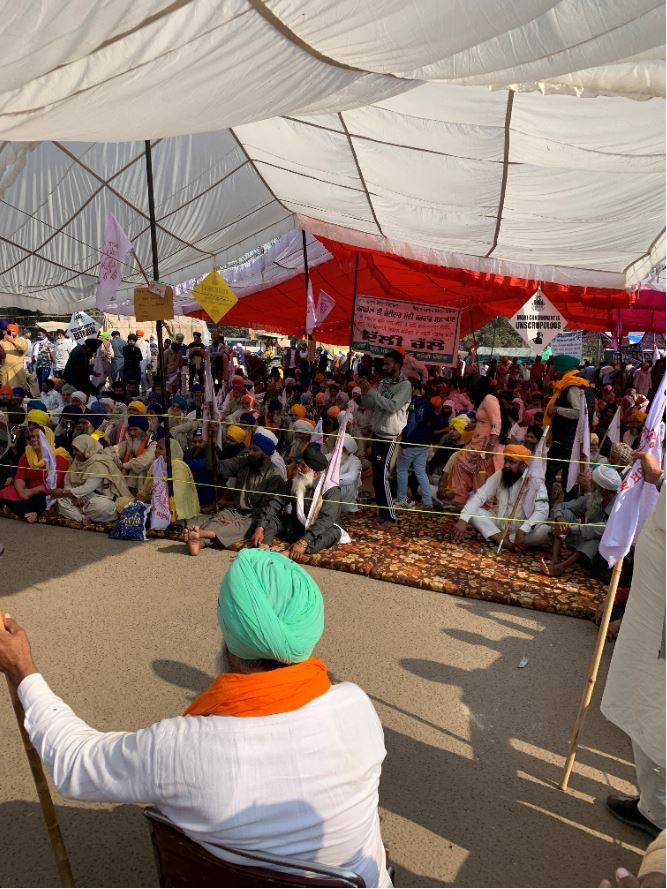