“There’s no business now, so earning even Rs. 300 a day is difficult”

As the sun began to set, it bathed Chandu Parmar in its warm glow. On an ordinary day, he would be bent over his wooden box, laboriously wiping off specks of dust from shoes before lavishly applying a coat of polish. But today was marked by a thin trickle of customers.

“There’s no business now, so earning even Rs. 300 a day is difficult,” he said. His voice, however, carried a rare strain of optimism.

31-year-old Parmar, who has polio, hails from Palanpur in Gujarat. In 2001, he ran away from his home after being repeatedly neglected by his family on account of his disability. Recounting his childhood struggles, he said, “I always wondered, if my siblings could receive love, why couldn’t I?”

Admittedly, his life changed for the better when he arrived at Borivali station in Mumbai. But several years on, the lockdown has proved to be a difficult period for him. Returning to his village, he was forced to go from one shop to another, selling grains from different fields.

Parmar, like most of the other shoeshine boys who are semi-educated, is compelled to polish shoes in order to make a living.

“I can’t get another job. I’ve only studied up to the 9th standard. What can someone with such an education get?” asked Maninder Duggal, another shoe shiner at Borivali station. He added, “We were at home for eight months. Our condition worsened. Only we know what we went through.”

Duggal sits in the company of Ram Gopal Nenania. Sharing his dilemma, Nenania said, “We are not educated, nor can we undertake any hard work. We don’t have another option. If we don’t get customers here, we won’t survive.”

The lockdown forced him to take up odd jobs to make ends meet, including cleaning a gutter on one occasion. Tense about providing for his children, Nenania added that he does not have the money needed for their admission.

At Dadar station, Ram Bachchan neatly arranged small boxes of black and brown polish. Looking up, he explained that he could not find work for six to seven months during the lockdown, nor could he get permission to go home at first. He admitted that there has been a lot of difference in his income. “We can’t even make up the amount that we lost,” he said.

“Bahut mushkil hai,” is the tenor that runs across conversations with all the shoeshine boys.

Upendra Shivprakash has been working at Churchgate station for the last 16 years. He explained, “Our work hasn’t returned to normal. Our daily earnings had stopped. Our children can’t go to school. Whatever they’ve studied, they will forget.”

“We can barely afford to eat. Those who are stuck in their villages can’t come back,” he added. 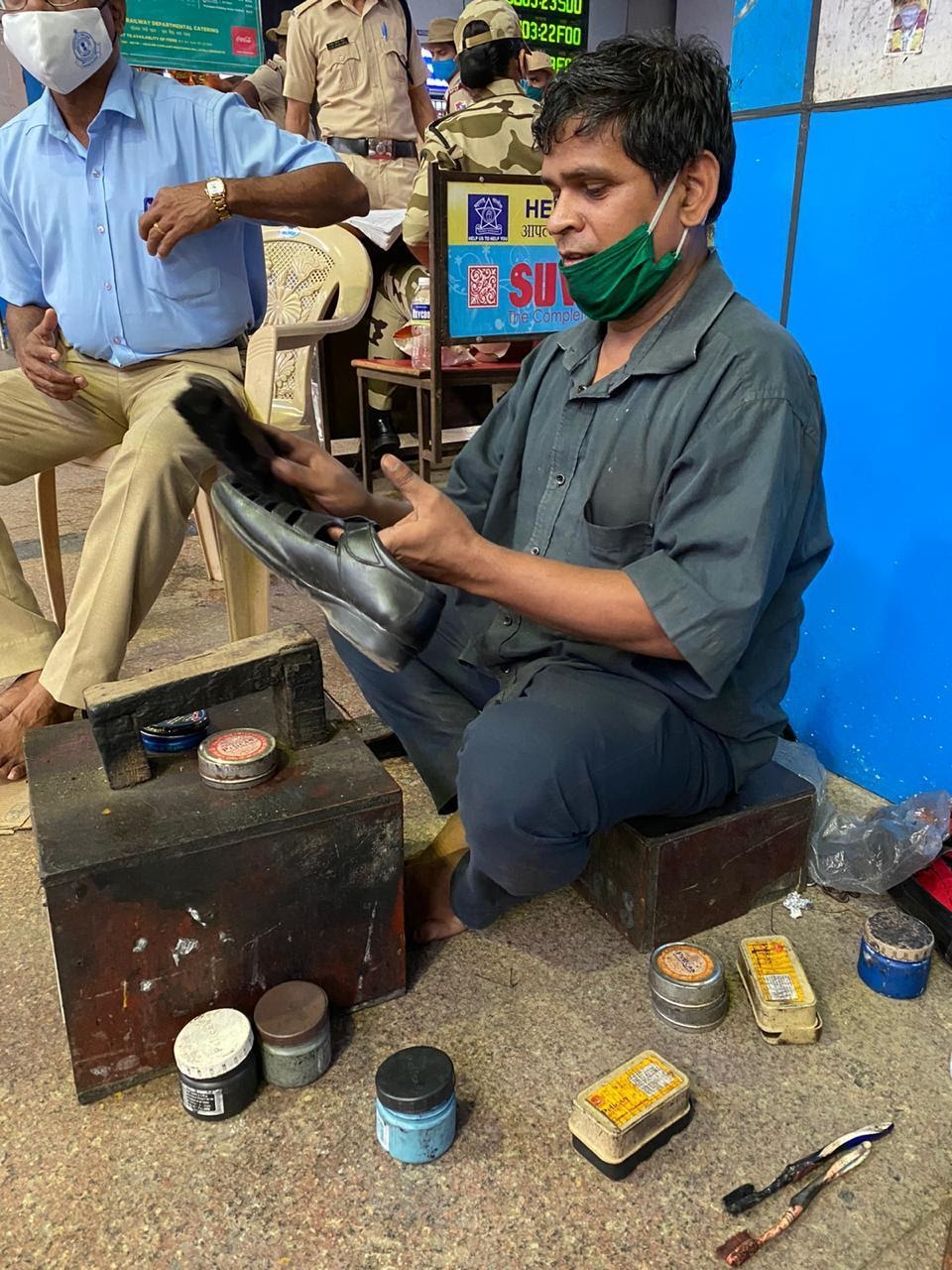 Shivprakash is the sole breadwinner of his family who lives in Mumbra. As he earns “less than half”, he is particularly worried about its ramifications on his children’s education. His son currently studies in the 10th standard and his daughter in the 8th standard.

The two children share a single smartphone between them, which affects their learning as neither of them get enough time to use it. “The lockdown is my biggest problem. There are no customers. The schools are shut and my children can’t study. I don’t want my children to take up this profession.”

Kashmir Serava, a cobbler-cum-shoeshine boy, who watched Borivali station grow from two platforms to ten, shares a similar plight as he struggles to stay afloat.

He explained that his father was also a shoeshine boy who came to Mumbai to work. It was easier for him to save and send money back to the village as he lived alone in the city. But Serava lives with his family at Nalasopara and is finding it extremely difficult to cope.

But Parmar, seated idly on platform six of Borivali station, basks in the rays of the setting sun. He displayed a cheerfulness that was absent in his fellow shoe shiners. Having experienced a childhood that was rife with rejection, neither does the fear of contracting the virus nor the pandemic that battered his income, deter him.

With a wide smile he exclaimed, “I’m not afraid of Coronavirus. Death can come from anywhere. All I have to do is smile and go through life.”