Invasion of the Coolie Catchers: 'Tea Tribe' Adivasis of Assam

When Kali Murmu left his hut for the forest with a bow and quiver in hand to pluck some fruits, he hardly knew it would be his last day in Pakur.

The year was 1837, when the trade war over Chinese tea raged dangerously with England, America, France, Spain and Netherlands flexing their muscles against each other.

In Europe, tea then was rich men’s status symbol and poor men’s dream.

Kali, a 21-year old Santhal, will soon be at Chabua in Upper Assam where Charles Alexander Bruce, an Irishman, was creating tea gardens and needed working hands. 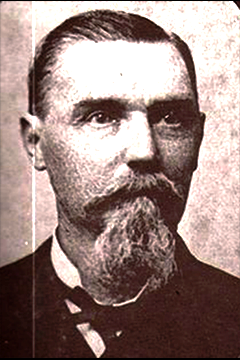 As he was not getting hands, the tea planter’s men resorted to abduction.

Kali moved towards the jungle unmindful of the six pairs of eyes watching him from behind the thick bushes. As he reached at the middle of jungle, suddenly three men sprang out of bushes to overpower him.

His mouth was gagged, hands bound and a long rope tightly fastened around his waist.

After walking for half-a-mile, when Kali reached at the end of the forest he found a covered bullock cart waiting there guarded by some armed men.

They were Coolie Catchers.

Kali is kidnapped! And damned!

Covering jungles, hills and rivers, when Kali reached Chabua some 1,250 kilometers from Pakur, it was completely a new world for him. To his surprise, he found many Adivasi men and women there.

They hailed from Dumka, Pakur, Ramgarh, Rajmahal, Giridih and Hazaribagh. Like him, they were kidnapped by the Coolie Catchers. Though born free, they were all bonded labourers here being ruled by Sahibs and Sardars.

Can you imagine, an entire workforce kidnapped to cultivate tea?

Raising the curtains on that kidnapping spree, we find that hundreds of men and women from the vast Chota Nagpur Plateau were sourced by the Coolie Catchers from 1837 until 1903 for the tea gardens during the Raj of Kampani Bahadur (the East India Company) and the British Crown subsequently.

Those kidnapped were Santhal, Munda, Oraon, Malpahari, Ho and other Adivasis of the Chota Nagpur comprising today’s Jharkhand, West Bengal, Odisha and Chhattisgarh.

The Tea Tribes often are in news for their small demands. They don’t want much. They only demands accordance of Scheduled Tribe status and fixation of daily wage at Rs. 351. 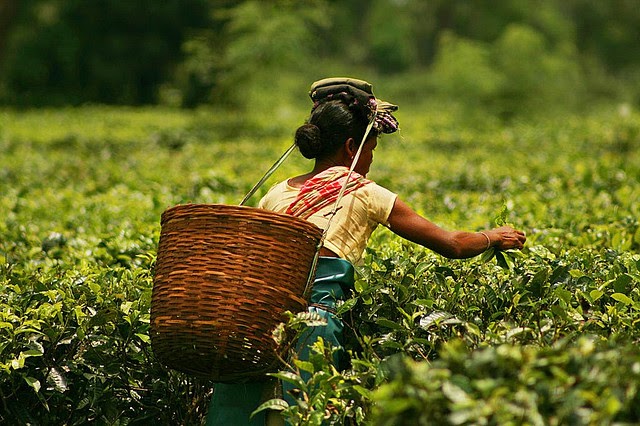 Plucking tea leaves in a tea garden in Assam (Wikipedia)

This disturbs me for three reasons.

Firstly, I spent my entire childhood and adolescence in Santhal Parganas of Jharkhand from where the Coolie Catchers sourced Tea Tribes.

Secondly, I toured tea garden areas of Northeast India extensively as a newspaper reporter seeing with my own eyes their problems. Naturally, I have a sentimental bond with the Tea Tribes.

Thirdly, almost all politicians begin their day with a morning cup of tea yet hardly anyone of them ever tried to solve the decades-old problem of the Tea Tribes.

But politicians are politicians, after all! They have many things to do other than their duty, the welfare of people who vote them in as representatives. Hence, it is no wonder they are not bothered to address the simple, small demands of the Tea Tribes of Assam.

If we cannot concede their simple demands since the introduction of our Constitution some 70 years ago, what is the utility of a functional government? India, that is Bharat, must find an answer to this question.

When Dasarath, the Coolie Catcher, was Speared to Death

As a student of the Pakur Raj School at Pakur in Santhal Parganas, I often ventured in the jungle that lay just behind the school. Deep inside the jungle, there was a very old brick ruin of what once was a house.

When Charles was busily exploiting coolies, the owner of that house Dasarath Singh too was busy catching (kidnapping) coolies. Yes, he was an expert Coolie Catcher.

As a school boy, I was told by my fellow Santhali students that angry Santhals speared Dasarath to death, killed members of his family and burnt his home.

Dasarath, in fact, had committed a major mistake in his kidnapping strategy in 1841. In that year, McKenzie Lyll & Company of London auctioned 12 boxes containing 36 chests of Assam tea sent to England by Charles, the Irishman.

That auction was advertised in the newspapers of London. All tea chests were sold out immediately. 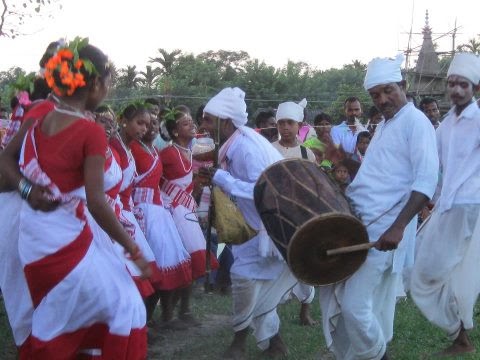 Dance of the tea tribe (Wikipedia)

It was at this juncture that England realized that Assam tea could be an alternative to Chinese tea. In fact, England’s monopoly over Chinese tea had ended in 1833 due to trade wars.

Subsequently, tea gardens started to spring up in Assam. Naturally, Dasarath Singh had to work overtime to kidnap more Adivasis.

But how did that expert Coolie Catcher’s doom come?

He abducted some Adivasis from around Pakur. The kidnapped were given a heavy quantum of opium so they would doze in the covered bullock carts. One of the kidnapped was Krishna Manjhi.

It was dead at night. Six carts, all full of human cargo, had stopped for the day break at the outskirt of Pakur, then a rural area surrounded by hills, jungles and rivulets. Dasarath was to carry the cargo to Assam via Purnea-Katihar-Siliguri and Alipurduar.

Suddenly, Krishna Manjhi woke up. The opium-effect had vanished. Stealthily, he sneaked away from the cart to reach his village and raised alarm. Immediately, the armed Santhals gathered.

They moved towards the bullock carts and caught Dasarath to spear him to death. They all knew him but not of his profession. They then attacked his home to kill all family members.

Finally, they set his house on fire. Unable to bear the ravages of time, that home turned into a ruin. 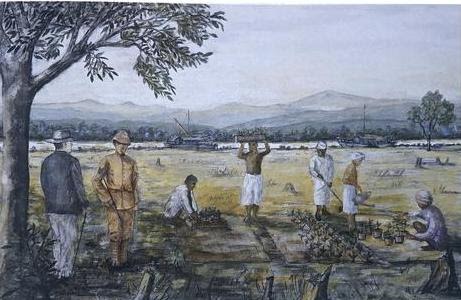 I saw that ruin as a school boy.

In 1823, Charles’s elder brother Robert Bruce, a soldier of Kampani Bahadur was held hostage for ransom by the Singpho tribe of Assam. He first saw the Assam variety of tea plants. Till then, only the tea of China used to be imported by all European nations.

On being freed, Robert carries some plants. But he could not sip the cup of tea made of them in his lifetime. He died very young.

His brother Charles, however, made it!

Charles sent the first consignments of tea to England in 1838 marking the beginning of exports from India. By 1842-43, regular exports to London began from Assam.

If Assam’s economy today depends on the tea industry to a great extent, it was due to those kidnapped coolies. Today over 31,221 hectares of land are under tea cultivation producing 507 million kilograms of tea which is about 53% of the total production of India.

In 2020, the total number of hands engaged in the tea gardens stood at 6,76,835. Nearly 75% of them are from Tea Tribes and 62% are women. They are all descendants of coolies kidnapped from the Chota Nagpur Plateau 183 years ago.

But the agony is that the Assam Government cannot even fulfil the simple demands of accordance of the Schedule Tribe status and fixation of daily wage of Rs. 351.

Two Leaves and a Bud

Robert Bruce was an extremely interesting character: a daredevil, a botanist, a risk taker and an Irish of shrewd business sense.

Assam, in his time, was a theatre of regular warfare between the British and local rulers. In one such war, Robert was ambushed by the Singhpho tribals. He was held hostage. He could be freed only on payment of ransom by Kampani Bahadur.

During his captivity, Robert often went to jungles guarded by armed Sangpho people. During one of such jungle trips, Robert saw the tea plants growing in the mountain slopes. Bessa Gaum, the chief of Singhpo tribe, showed how they cultivated them.

After Kampani Bahadur paid ransom, Robert walked free with some tea plants taken with the permission of Bessa Guam.

That was the time when the East India Company was trying to monopolize the tea trade in Europe. Robert realised with those tea saplings, he has could open up a new chapter in tea trade.

But he died suddenly.

Hence, Charles stepped into tea plantation. This experimental plantation happened at a time when England realized after tea supplies from China dried out, an alternative supply zone was necessary.

But England has to wait till Charles launched his tea-venture full scale in 1843-44. But he could not have done that without the help of Maniram Dutta Baruah whom people called Maniram Dewan.

A Conspiracy Over Cups of Tea

When Charles was fighting heavy odds for tea plantation, Maniram Dewan came at his rescue.

But a series of events, particularly the ban on Hindus from visiting Kamrup Kamakhya Temple, and the plundering of gold from the centuries old Maidams or royals tombs of the Ahom kings, turned him against the British.

Deep inside the burial vaults of Maidams at Charaideo near Sibsagar in Assam rested the gold ornaments, silver items, gem-studded utensils, furniture, swords and ivory items that once belonged to the Ahom rulers for centuries together.

Maniram complained. He petitioned to the higher officials of Kampani Bahadur in Calcutta. But he was considered a rebel and a case was filed against him in the Sadar Court of Calcutta.

In 1857 when he was in Calcutta, the Sepoy Mutiny broke out. Maniram decided to join the Mutiny with the hlep of powerful tribal chieftains and Zamindars of Dibrugarh and Golaghat.

Maniram was arrested, thrown in Alipore Jail of Calcutta and finally sentenced to death. He was hanged in February 1858.

He was a victim of conspiracy to end entry of a local, indigenous Assamese into the tea trade independently.

Kampani Bahadur feared Maniram may act as a strong stumbling block towards British monopoly over tea trade in Assam. He was already one of the Directors of the Assam Company founded in 1839. That was India’s first tea company.

But he resigned in 1841 to launch his own tea estates at Jorhat and Sonari. This alarmed the British. They knew Maniram wielded so much influence in Assam that he could emerge as a major threat to the Company’s monopoly in tea trade.

Hence, by hanging him the British made tea trade all a Firangi affair with no Native competitor.

And an Industry Flourished…

As industry flourished, thousands of the likes of Kali Murmu of Pakur were no more than dumped in the Barak and Brahmaputra Valleys of Assam. Tea gardens sprang up at Mangaldai, Gerimari Chapari, Jorhat, Nagon, Sonipur, Kharupetia, Hailakandi, Tinsukia, Algapur, Katlicherra and Lala.

The coolie colonies kept on sprouting in these areas where the condition of living was extremely harsh with tigers, leopards, wolves, rhinos and elephants regularly coming to the human settlements. It was the sinewy hands of those Santhals that felled the trees, created plots for planting tea seedlings and irrigated them.

Even today, the condition of Tea Tribes has not improved much. They are a strange case of the dichotomy of rule and policy in the Republic of India, as Tea Tribes are all Scheduled Tribes in their states of origin in the Chota Nagpur Plateau, but they have not been accorded this status in Assam.

Where does the law stand?

Maniram Dewan: first Indian tea entrepreneur who was hanged by the British