Tractor2Twitter - A Campaign That Has Taken on the Troll Army

In the ongoing farmers’ agitation that has seen people from various states converge on the gates of Delhi, there is a very interesting story of how a group of youngsters from Punjab took on the powerful troll army and countered the virulent misinformation campaign launched against the masses agitating against the three contentious farm laws.

The launch of Tractor2Twitter campaign has seen the reversal of trends on the social media and now it is the narrative of the farmers and those standing with them who set the agenda.

The idea germinated from the experience of the mainstream national media simply turning a blind eye to the two months of protests launched by the farmers in Punjab. There was no reportage on mainstream television channels of farmers resorting to Rail Roko, not allowing toll tax plazas to function, preventing people from purchasing fuel from petrol pumps owned by corporate entities and calling for boycott of a specified mobile network.

“Things took a turn for the worse when a campaign to defame the protesting farmers was unleashed on the social media as well as television channels when the farmers started moving towards Delhi in the last week of November. It was a powerful attack on the protesting people where they were called terrorists, Khalistanis, Naxalites and anti nationals,” recalls Manik Goyal who was of the six youngsters who launched Tractor2Twitter movement on November 29.

“It was at that point that we decided that such an assault needed to be countered, especially on the social media. Our initial goal was to reach out to around 25,000 people on the social media with the narrative of the people with regards to the movement that was building up. But the response, particularly from the youth that is the main social media user was stupendous. Within three to four hours our tweets were reaching out to 1.5 lakh to 2 lakh twitter users and we were setting the trends. Now our messages easily reach out to 4 to 5 lakh people within very little time. The beauty of the entire exercise is that we did not seek the support of even a single rupee. Today our volunteers just effectively use their mobile phones to set global social media trends.

We have our Non Resident Indian (NRI) volunteers spreading the farmers’ narrative in languages like French, Italian, Spanish etc. This is apart from the content we generate in English, Hindi and Punjabi which also gets circulated by our friends and supporters in South Indian languages and other regional languages like Marathi, Gujarati, Bangla etc,” Goyal explained.

He said that from day one two basic basic functional requirements and rules were set. One, no offensive language would be used against any one. And two, no financial aid would be sought for this initiative.

Today the campaign is dominating twitter with the team coming out with daily updates on the protests, and adding to this with live reporting from different borders around Delhi where the farmers from the states have gathered including Tikri, Singhu, and Ghazipur.

The team members told The Citizen that there is instant response to the live reportage that they post and people look forward to the daily updates across the globe. “One day we reported that there was shortage of fuel at the Tikri border and within no time the matter was resolved. Another time we reported that there was some sanitation issue at Singhu and within a couple of hours we had mobile toilets being installed and proper arrangement of water made,” they said.

Apart from Twitter, there are five Whatsapp groups of 250 members each and 2200 volunteers on Telegram. There is a team of content generators and another one of researchers. Whenever there is an attempt to launch a misinformation campaign against the people’s movement, it is countered with factual data and information on different social media platforms.

“There have been several occasions now when these so called star anchors on Godi Media have had to pull down their propaganda stories from their websites and retract from social media in the face of the factual onslaught launched by Tractor2Twitter on Twitter and Facebook which further gets posted on platforms like Instagram and Telegram as well,” Manik Goyal said. He pointed out that all this had been achieved without spending money or using paper.

One of the positive aspects of the social media counters launched during the agitation has been that even the elder lot in rural areas has become very proficient in not only using smart phones but also responding on different social media websites in Punjabi and other languages as well.

One got a demonstration of this when the social media spat between Bollywood actress Kangana Ranaut and Punjabi singer and actor Diljit Dosanjh on the social media. Dosanjh questioned the actor for siding with right wing forces for her unsavoury post about an aged lady protestor. Dosanjh remained polite and witty through the exchange.

In a statement issued in Chandigarh on behalf of Tractor2Twitter team, Manik Goyal and Amandeep Singh said, “When the fight for survival is being fought, we believe we should learn from every act of our opponents fast. We are a small group supported by love of people from not only Punjab but across the globe. We are using Twitter to highlight the major incidents of Kisan Morcha. Since November 29, 2020, it’s more than one month and every day is bringing us new experience. We are growing stronger with every passing day.”

“Today we had given the hash tag in Punjabi #ਜਾਂ_ਮਰਾਂਗੇ_ਜਾਂ_ਜਿੱਤਾਂਗੇ (Ya Marange ya jitange) as this was the consensus of our farm leaders in the meeting with Government of India and within half an hour, this hash tag started trending at No 2 in India to our surprise. We take pride that in India’s twitter history, it is the first time that some hash tag is trending at this level in the Punjabi language. This is our strength together as Punjabis. It’s the same language which is being suppressed in our state in private schools,” the statement said.

It ended with the comment, “We as Tractor2Twitter feel proud on achieving this milestone and are looking forward to creating many more such hash tags so we can raise the cause of Punjab together on this global platform and provide leadership to the whole country and the world as our forefathers did in the past. They are our inspiration in every step we are taking.” 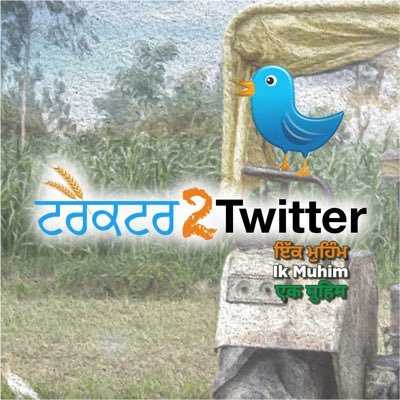