Exposes both opposition and ruling coalition

As I write this, there is suspense over the fate of the ongoing farmer protests and the new farm laws that have sparked them. Eight rounds of negotiations between union government and farmer representatives have ended without a solution in sight, and what the Supreme Court (SC) says in a clutch of upcoming hearings could prompt unexpected budges and hardenings in positions. (SC has since pulled up the government for not working to resolve the crisis, the farmers have thanked the apex court but refused the suggestion of a committee).

Clearly nothing the farmers or government do or the SC orders will change what the farmers’ protests are conveying about our polity.

The farmers have kept the protests apolitical from the beginning. It’s isn’t difficult to guess why they decided to do so. One: Distance from the opposition would make it tougher for the government to dismiss the protests as politically motivated, lend the protests added credibility with the public at large. Two: Chances of the protests digressing from farm sector issues would be minimized. Three: Since ruling parties would rather bend before the people than their rivals, a favorable outcome could be easier to negotiate.

The thinking has pretty much held true. The farmers’ visible ownership of the protests has lent it credibility. There is more popular distrust about why the farm laws have been introduced than the Narendra Modi government has gotten accustomed to with other controversial laws it has brought in. Only the converted are running with slanderous labels that have been flung at the protestors. And, for once, the prime minister’s personal conviction isn’t proving enough to shore up his party’s and government’s position.

The protestors’ core demands have been clear and consistent all through. Non-farm issues around the state of Indian democracy and crony capitalism have been raised smartly, to lend context and weight to the core demands, not dilute their scope and focus.

Yes, the negotiations haven’t gone anywhere, but there’s been enough pressure on the government to regularly present itself at the negotiating table. It is no mean achievement against a government not exactly known for its flexibility. Unsurprisingly, the protests have come to be looked at as a refreshing assertion of people’s power at a particularly testing time for Indian democracy.

How different would the situation be if the opposition was at the forefront of the protests? Its past actions and sins would have been invoked to mock its present position, a slew of unrelated issues would have been raised to cloud the debate, and the fate of the protests would have become twined with the image and deeds, alleged, imagined, and real, of the leaders, leaders’ ancestors, and parties championing them.

Of course, it is not the apolitical nature of the protests alone that explains the goodwill and response the protests are enjoying. Things haven’t reached a stage where farmers can be bracketed with, and battered like, Muslims and left-liberals, and that has been an important factor too.

Clearly, the farmers see better chances of success in keeping the opposition away than in partnering it. This is surely an unflattering view of the opposition, a comment on the trust it enjoys with the protesting groups, the perspective, nous, and energy it is expected to bring in pursuit of their cause.

There is perhaps an even more serious indictment of the ruling coalition in the protestors’ choice to keep the opposition at bay. It speaks of how the protestors see the ruling coalition, as a dispensation contemptuous of the opposition, too arrogant to engage in political negotiation, prone to interpreting its parliamentary majority as license to press ahead with contentious laws, and confident of managing unpleasant political fallouts of such laws.

The protesting farmers, indeed the citizenry at large, are thus engaging with a government that won’t listen, an opposition they can’t trust, overall a polity that inspires little confidence and compels matters to be taken in individuals’ own hands.

Of course, peaceful civic engagement is never too little, never mind the “too much democracy” line, but the prospect of a situation where hubris, inertia, and coercion disallow political parties from mediating issues that matter must concern us all. In the short run, it will limit the ambit of issues occupying public discourse. That’s worrying in itself, but the medium term implications – with legitimacy questions surfacing about the polity and social unrest fomented – could be worse.

If there’s a silver lining in all this, it is the space for meaningful politics it points to. The farmers would’ve been more amenable to political associations if there was a political party around with a proven record of speaking for them.

There are other issues - citizenship and corruption come to my mind immediately - on which citizens have refused to take political overreach lying down. One of these actually threw up a political party, the Aam Aadmi Party, that hasn’t done badly for itself, though it has some distance to travel before it lives up to its original promise.

The larger point holds though: Being apolitical is more of a compulsion than a choice, and it is time this started changing. 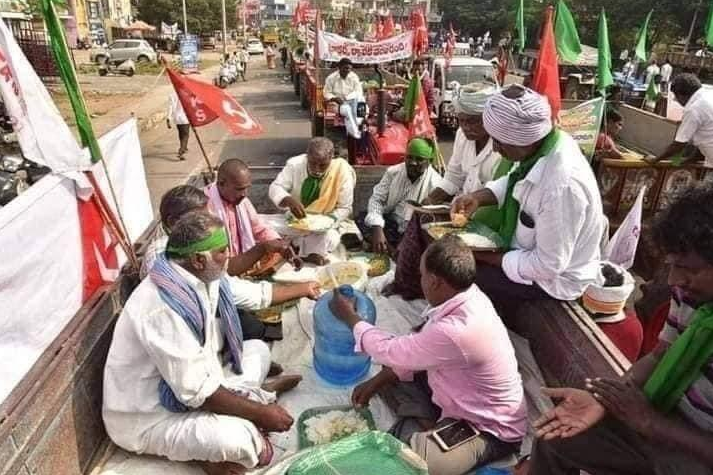