Civil society individuals and groups are organising a Kisan Sansad near the Singhu border on January 23 and 24 in support of the agitating farmers. The people’s farmers Parliament will be held at Guru Tegh Bahadur Memorial close to the Singhu border which is one of the main venues where the farmers are currently camping.

The Kisan Sabha will be joining the farmers in demanding the repeal of the three controversial laws. In a background note the committee and collaborating organisations have made it very clear that the farmers have been left with no choice but to ensure that the laws are repealed and that it is completely false to assume that the farmers are free to sell produce where they like, they enjoy equal bargaining status with the buyers, and that removing the restrictions on traders will necessarily mean better price for the farmers.

The note makes it clear that the farmers are demanding the repeal as they know that through the laws the government is trying to alter the legal architecture of Indian agriculture, and together amount to the retreat of the government from its responsibility to protect the interests of the farmers. The background note is a comprehensive document that clears questions, and provides insights into the short and long term fall out of the laws that the government is refusing to withdrawn.

Excerpts from the note:

The rationale being given by the Government to claim that these Acts will benefit the farmers is based on incorrect or problematic assumptions that are not true on the ground. These false assumptions are:

(i) That farmers were not free to sell anywhere they like in the existing state APMC Acts. In most states, such freedom already exists (In various state APMC Acts, farmers were exempted or excluded from the purview of regulation (Maharashtra (sec.6), Karnataka (sec.8(1)(b)(i)), Andhra Pradesh (sec.7(1)), Gujarat (Sec.6(3), Uttar Pradesh (sec.9(1), Odisha (Sec.4(3), for example). The fact is that 63% of the farm produce is getting traded outside the mandi regime as per NSSO data, but was subject to regulation and oversight.

(ii) That farmers enjoy an equal bargaining status with the buyers and their problem is lack of more choice:It ignores the reality that a majority of farmers are caught in a nexus of input dealers, informal credit and output dealers. Farmers do not have holding capacity in terms of storage or finance and hence forced to sell immediately after harvest. Hence their bargaining capacity in the market is very limited, and they face a huge inequality in the market place with agri-business companies and traders on the other side. And it cannot be forgotten that big capital was never bigger in the past in terms of market consolidation of big players.

(iii) That de-regulation of traders and companies without any oversight and information is useful to farmers. Every evidence suggests that farmers need the regulatory protection from the government in their interfaces with markets when new Trade Areas are created and trade happens outside mandis. This is the reason why APMC Acts exist in the first place, to ensure fair market practices for farmers who are mostly small and marginal farmers, who face a huge inequality in the marketplace.

(iv) That removing restrictions on traders and agri-business will necessarily mean better price for farmers. The laws assume that many fair-playing, non-cartelising buyers would line up in front of farmers and buy from them directly without any intermediaries and aggregators and the freed-up margins from middlemen will accrue to farmers. This textbook picture of competition does not hold true, and deregulation would result in monopsonies and domination of a few big players, now outside the mandis.

(A) Farmers are demanding the repeal of these Acts because they understand that these three Acts seek to alter the legal architecture of Indian agriculture to the detriment of the farmers and that they also work in tandem with each other (the government also knows that these three Acts work together and therefore, brought them in together as a package). These amount to retreat of the government from its responsibility to protect the interests of the farmers. The core message of these three acts as a whole is that the Government of India does not care for, or respect the federal polity of the country, welfare provisions enshrined in the Constitution and is happy to let the small and marginal farmers as well as poor consumers fend for themselves. These would result in unregulated freedom to corporates and agri businesses at the expense of crores of small and marginal farmers of India.Farmers demand nothing short of repeal of these legislations because they wish to save the future of farming and farmers in the country.

(B) Farmers demand repeal of these Acts also because they were never asked for by the farmers or their organisations, because they did not involve any pre- or post- legislative consultation with the principal stake-holders with no draft Bills circulated for public comments and so on which is an important part of any good law-making process, because these were rushed through the Parliament in violation of parliamentary procedure, and because these were illegitimate right from the beginning in terms of the processes adopted to ram them down the throats of farmers. In fact, it is important to note that for several years now, farmers in the country have been fighting for a legal entitlement for guaranteed realisation of a remunerative MSP for all farmers and all agricultural produce – the government chose to ignore this demand despite lakhs of farmers coming into Delhi in 2017 and 2018. On the other hand, it chose to bring in legislations which go in the exactly opposite direction!

(C) Farmers demand repeal of these Acts because ‘Agriculture’ and ‘Markets’ are State subjects under the Constitution, and through these Acts, the Centre is blatantly encroaching into the domain of the State governments. The Centre is using the item “Trade and Commerce” under the Union List to justify these Central Acts, but farmers contend that it is ‘Markets’ that are being directly and drastically affected by the laws. These are the first points of interface between farmers and markets. Further, for farmers, the state government and its agencies are not only more accessible, but they are also more accountable. When regulation is with the state government, the entire administration from the village agriculture and revenue officials to taluka, division and district level officials have the duty to intervene on behalf of the farmers when required, and the farmers have an opportunity to use the administration as well as local elected representatives to address their issues. These avenues become ineffective for farmers when the agriculture markets and contracts are brought under a Central legislation.

(D) Farmers demand repeal of these Acts because they know that the problem does not lie merely with a few select provisions or the wording of these laws. They object to the core provisions of these laws and question their intent – it is about the very objective of the laws. Hence,amending these laws is not sufficient. These laws must be repealed in toto, so that it becomes a lesson for future governments: farmers must be taken into confidence before a government seeks to alter the conditions of their life and livelihood.

(E) Farmers are also falling back on a well-set procedure in law-making where even a government which introduces a Bill in the Parliament, when it encounters a lot of recommendations for amendments from a Standing Committee, goes back to the drawing board completely and brings in a new Bill rather than move many amendments. In the case of these laws too, given that the objective itself is wrong, many provisions need to be changed and it is not worth doing so. A full repeal is the requirement in such a situation.

(F) Farmers are also apprehensive of some amendments now which will continue to keep the Acts alive, allowing the government to pass executive orders that might once again weaken the position/protection of farmers’ interests. A repeal would be an answer to this fear.

Farmers are also pointing out that the government has delayed engaging with the farmers for too long, and ignored the continuous protests that were unfolding all over the country for many months now. Now, the trust deficit of protesting farmers on the government has only widened, and they will not have anything short of a complete repeal. 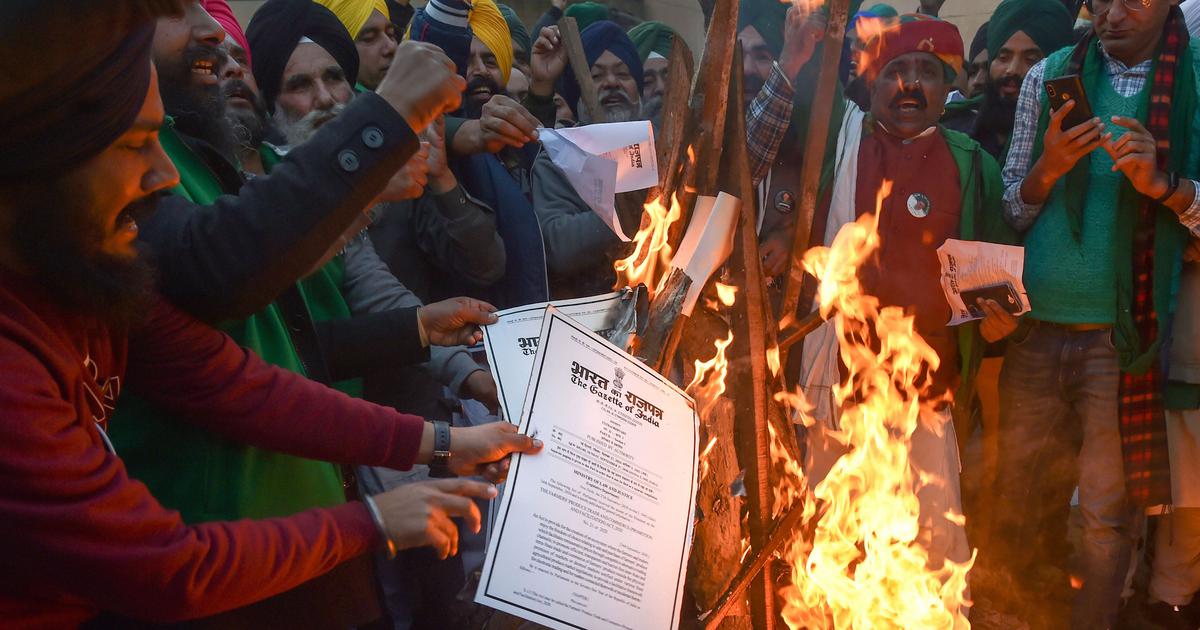