The mobilization for the farmers’ tractor march scheduled for January 26 has reached a scale where numbers now cease to matter. While the pliant media in all its servility has chosen to ignore the congregation on the borders of the national capital and is still trying to project that this is a movement confined to Punjab, Haryana and Western Uttar Pradesh, the facts are to the contrary.

There are reports pouring in from state after state of the massive sit-ins or the dharnas that the farmers have been resorting to outside the Raj Bhawans over there.

When it comes to mobilization in Punjab and Haryana ,the nerve centre of this farmers’ movement, the artists and singers of popular and folk music have given this transformed peoples movement an unprecedented musical push.

On Sunday , the social media was dominated by the videos of tractors plying from various states towards Delhi. It has been a sight to watch - the long lines of tractors proudly displaying the Indian tricolor along with the green and yellow flag that has come to symbolize the farmers’ struggle against the three controversial farm laws, making their way to Delhi for the Kisan Parade witn the music playing alongside. Farmer leaders have been urging the farmers to play songs of the land, of the national spirit, and not other music on January 26.

Singer Kanwar Grewal along with Harf Cheema and Galav Waraich came out with the song ‘Jittuga Punjab’ (Punjab will win) on Sunday and within 12 hours it recorded more than 186000 views. Kanwar Grewal has become immensely popular during this movement as he has been a permanent feature at the protest sites. His musical performances at different borders around Delhi where he has sung about Punjab’s history, the farmer movements and other social issues has made him a household name not only among Punjabis but among Haryanvis and people from other states as well.

One of the most interesting aspects of this movement that is being celebrated in the songs is the bonhomie between the people of Punjab and Haryana. The singers from both the states have been referring to each other as brothers who have joined hands against injustice and have been pointing at how the politicians have never allowed them to understand each other and work together. Efforts to divide them early on in the protest were rejected with contempt by the farmers of the two states.

As several observers have pointed, those opposed to the farmers’ protests were banking heavily on driving a wedge between the farming communities of Punjab and Haryana to cripple the movement. But the people of Haryana dismissed all this, by not just joining hands with their Punjabi brethren but opening their homes to the farmers from Punjab and other states as they all joined the long wait.

“It is a known fact that people from Haryana have a sweet tooth. They have drenched us all with their sweetness. They have literally flooded the langar venues with milk, sweets and other essentials,” a woman from Punjab who was at the Tikri border said.

Even in the latest song ‘Jittuga Punjab’ the singers have come out with the parody of evergreen Punjabi folk song ‘Challa’ and have sung that Punjab will surely win because its younger brother Haryana is standing shoulder to shoulder with it.

Another song that has become immensely popular is ‘Bhai Bhai’ by Heer and Rahul Sandhu. Sung in Harayanvi dialect, its lines ‘Khel laya khel tanne jaat paat ka, rl gai se bhai ab rok ke dikha’ (You have played dirty communal and casteist games. Now the brothers stand together and if you have the guts, come and stop us) conveys the sentiment clearly.

There is yet another popular song ‘Chhota Bhai Wadda Bhai’ that begins with a Nihang Sikh saying, “Haryana toh sar ka taj ban gaya hamare.” (Haryana has become our crown).

The songs in both the languages are also celebrating the contribution of women in this movement. There are songs by women singers where they are telling their men folk to return victorious from Delhi while they will take care of everything in the fields and homes. Yet there are others that show women at the protest sites with children as young as a few months old. This is a very positive image that has gone out from states otherwise perceived to be dominated by a patriarchal mindset where the administrations are faced with skewed sex ratios.

Meanwhile, political commentator Jagtar Singh has rightly pointed it out in his recent blog, “This Republic Day would determine whether India continues to be a Colonial Democracy or gets transformed into a People’s Democracy in accordance with ‘We the people’ as per the Constitution in which the will of the people prevails, not that of the ‘rulers’ enjoying just numerical mandate.”

The blog also underlines, “The three farm laws for the junking of which this struggle is going on are not for the welfare of the farmers but the move to corporatize the farm sector. This model is anti-people as both production and market for farm produce would be monopolized by the corporates. It is not just farmers’ struggle. The farmers are struggling to save the people from corporate exploitation. It is in this context that January 26 is crucial when the farmers’ organizations have given the call to take out a tractor parade in Delhi to make the Republic Day as the Farmers’ Republic Day. At another level, the farmers would reclaim the Republic. It is now immaterial whether the parade is taken out on the Outer Ring Road or not as it is the massive mobilization that is now all the more important.”

Meanwhile, there are reports of protests in several small towns in different states. There have been dharnas going on outside the Governor Houses in different states. Mumbai is set to witness another mega farmer demonstration at Azad Maidan. Pictures of farmers marching from various corners of Maharashtra including Nasik towards Mumbai were dotting the social media on Sunday. All India Kisan Sabha leader Ashok Dhawale told this reporter that 15,000 farmers from 21 districts would join the dharna organized by the Samyukta Shetkari Kamgar Morcha at Azad Maidan.

These reports expose the right wing propaganda of the protests being confined to Punjab, Haryana and Western Uttar Pradesh. Social activist from Gujarat Dev Desai pointed, “More than 600 farmers, animal rearers and people from minorities and marginalized communities have left for Delhi on more than 100 tractors to participate and lend support to farmers’ movement.” 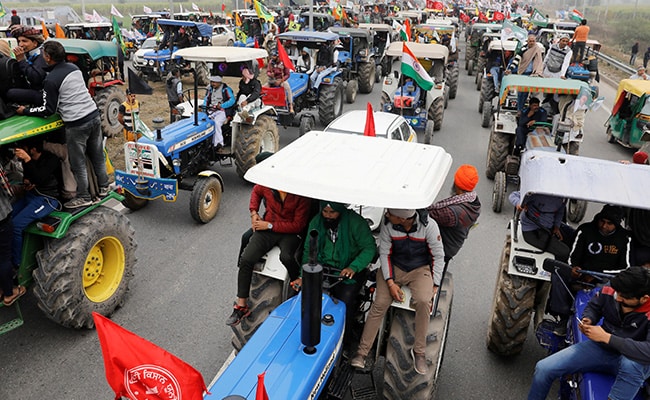