The Farmer IS India

Freedom of speech is a wonderful thing, for without it we would never know who the idiots among us are. Like the celebrity anchor on an English news channel who on the 26th evening equated the tractor parade in Delhi to the insurrection on Capitol Hill on the 6th of this month! Or those other lamebrains who don't know the difference between the Nishan Sahib and the Khalistan flag. Had it not been for our fundamental right to speak our minds we would never have known of these delayed- fuse time bombs planted in the nation's public discourse.

As you sow, so shall you reap: the farmer has known this for a long time but Mr. Modi and his government are learning this only now. If we go beyond the scattered violence in Delhi on Republic Day ( which was not more than what was heaped on the students of JNU and Jamia Millia last year by a police force " exercising maximum restraint") the overwhelming turn-out of farmers/ villagers from many states indicates that this movement is no longer about the three farm bills alone. It is just as much about the betrayal, calumny, humiliation, vilification and persecution they have endured at the hands of the government and its media collaborators for the last few months. Our rural communities may not have much money in their current accounts but they have something far more valuable which a callous Delhi has tried to rob them off: pride and dignity. The protests are also about this.

It is just as much about the slow and lingering decline of rural India and its hardy communities, the falling share of agriculture in the GDP, the non-delivery of basic services which we in Delhi, Mumbai and Chennai take for granted. Notwithstanding our Constitution, there are many categories of citizens in the nation and the farmer occupies perhaps the bottom slot. He is not considered worthy of being allowed into Delhi's Lutyens zone, not even onto the outer Ring Road, and to keep him out we have resorted to the medieval tactics of digging trenches and moats, erecting barriers and firing (water) cannons.

We live in two Indias: urban India which benefited from the post 1991 neo-liberal reforms and produced 102 billionaires ( 2020 figures, fourth highest in the world) and 330,000 High Net Worth Individuals; and the second, rural Bharat where 200 million go hungry every night and 40% of whose children suffer from malnutrition. Nothing encapsulated this dichotomy better than, ironically, the split screens of TV channels on Republic Day: on the left were grand scenes of the embellished militaristic march past on Rajpath viewed by well clad politicians and officials, on the right the sight of unadorned farmers driving into Delhi's outskirts on tractors.

Rural India has been abandoned on our journey to the fabled five trillion dollar economy. Consider some of the statistics. The urban per capita income( Net Value Added) in 2018-19 was Rs. 98435.00 while the figure for rural areas was Rs. 40924.00, less than half. This is inevitable when one factors in the fact that whereas agriculture provides only 15% of GDP, it accounts for 40% of total employment.

In 2011-12, according to the Consumer Expenditure Survey of GOI, the average monthly household expenditure in urban areas was Rs. 2630.00: the corresponding rural figure was Rs. 1430.00. ( The survey figures for 2017-18 are available but have not been released by the govt., presumably because it does not suit it.)

Agriculture, which is the mainstay of our villages, is becoming increasingly unviable and farmers are exiting it in hordes. The NSO data shows that the rate of exit from farming is 2.04% per annum. To appreciate the magnitude of this tragedy, absorb this: 34 million farmers moved out of agriculture between 2004-05 and 2011-12. They now wander between our prospering cities as migrant labour.

Which is why, for the first time in decades, in December 2020 rural unemployment at 9.15% was higher than urban unemployment rates ( CMIE report). Commensurate with this is the shockingly high suicide rate among the farming community, far higher than the national average: more than 300,000 farmers have killed themselves in the last 25 years- a little more than 10000 every year.

About 50 million people have been displaced ( " development refugees") since Independence, and their exodus continues at the rate of 500,000 per annum. Their lands are appropriated at ridiculous prices for projects which actually help urban India only- dams, mines, highways, SEZs, urbanisation, airports. The tribals are the worst affected, with many states yet to implement the Forests Rights Act. If these oustees are lucky they get jobs as unskilled labour on the lands they were once self-sufficient owners of, if unlucky they will migrate to some fetid urban slum.

Rural India is being denuded of its resources- land, water, forests, minerals, labour- in a massive transfer of resources from the rural poor to the rich corporates. The three farm laws will transfer the last remaining asset- agricultural crops- also to these favoured entities. The pandemic itself provides proof of this: while 120 million people, mainly migrant labour from the villages, lost their jobs in the last one year, the top 100 billionaires INCREASED their wealth by 35% or 400 billion dollars in the same period, according to a recent OXFAM report.

There is , relatively speaking, little development of our villages while tens of thousands of crores are spent on cities- flyovers, metros, river-front beautification, Central vistas, stadiums, even statues of the dead to pander to the egos of the living. The government plans to spend Rs. 200,000 crores on 5151 Smart City projects- what about the 600,000 villages where almost half our population resides? Even basic services and facilities are not available in them: to take just one example, 80% of doctors and hospital beds are in cities, the villages are expected to manage with " hybrid pathic" doctors- a mix of allopathy and ayurveda.

Rural India is crying out for some attention, not more exploitation and neglect. The farm laws are the final assault and the final frontier. The farmers know it and it is time for our pampered upper middle classes, the backbone of the present government, to wake up to this. The current protests have many layers and it is time to stop oversimplifying them in the language of arrogance, privilege and contempt.

Dignity and a proud self respect is just about the only thing we have left our farmers with, and the urbanised sophisticate is now attempting to denude them of that too. The Golf Links socialite who is aghast at the so-called " desecration" of the national flag at the Red fort should know that the Punjab and Haryana farmer has seen his sons draped in the tiranga when their bodies are brought from our borders, he doesn't need to be lectured about the flag by a gin drinking neo-colonial.

The farmer IS India and his roots are too old to be dug up by megalomaniacs, opportunists, sycophants and the elite. He will eventually claim what is rightfully his. Bharat had come to India on Republic Day and has left its visiting card. India is now on test. As the poet said: 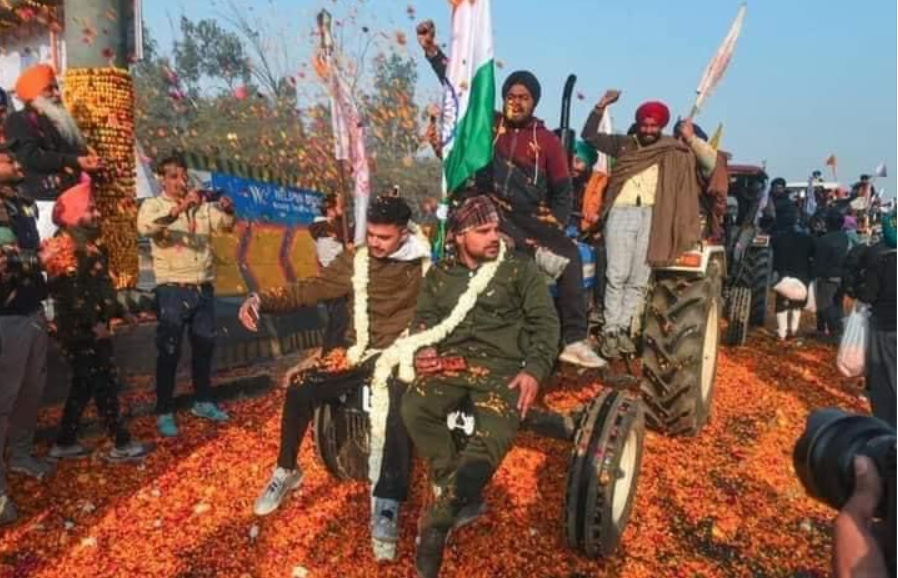