Toll Plazas Emerge as Most Effective Theatres of Farmer Protests

Nails, coiled and barbed wires, spikes and permanent barricades around protest sites on the Delhi borders have moved the farmers protests to the toll plazas where thousands have been collecting as the movement gathers strength.

Despite efforts by various state governments to block the toll plazas, farmers are now gathering at more and more such venues across Haryana in particular. Farmer organisations leaders pointed out that toll plazas were part of the planned strategy from day one. In Punjab such protests were held for three months before the farmers moved to the borders of the national capital.

During three months the agitators had resorted to various means like rail roko, blocking shopping malls, demonstrating outside the petrol pumps being run by corporate entities and protesting at toll plazas while not allowing the authorities there to charge even a penny from the vehicles plying on the highways. Even as the farmers and workers moved to Delhi borders, these protests have continued.

But now, given the cement barricades across the protest sites at Singhu, Tikri and Ghazipur borders the Haryana farmers are doubling up to intensify the protests across their state and the toll plazas have emerged as the main sites of protest.

“These are venues of convenience for even the leaders of the kisan organisations p to visit and address the masses. People from dozens of villages come to the toll plazas where langars are served and the farmers’ leaders tell them about the developments and the next course of action. It also needs to be understood that all the toll plazas are connected with Delhi both physically as part of the road networks as well as economically, as revenue providers. The people are also using it as a counter attack against governments targeting the farmers,” Yash Bhambhu, a farmer from Sirsa, said.

Sources said the farmers in Haryana have been resisting repeated moves by the state government to get the toll plazas vacated by turning up in larger numbers for all meetings.

In fact the farmers in Haryana has been rather aggressive against the witnessing villagers taking a very aggressive stance against the ruling Bharatiya Janata Party (BJP) – Jannayak Janata Party (JJP) leaders threatening them with social boycott and reportedly putting up boards outside villages asking them not to enter.

Meanwhile, observers point out that in the face of the defaming and undermining campaign launched against the farmers by the embedded ‘Godi media’, toll plazas have also emerged effective points for communicating the truth about the farmers’ movement to those traveling on the highways. In addition they are also good networking points for the local leadership of the farmer unions.

He disclosed that the same has been the case with the shopping malls and chains owned by various companies. “A shopping mall in our area had to shut the day after its opening. They had to shift their entire merchandize to Moga while they continue paying a rent of around Rs 6 lakh without any business,” he added.

Jagmohan Singh of Bharatiya Kisan Union (Dakaunda) puts the protests at the toll plazas in a different perspective. “These protests highlight the sentiments against the corporate model. People join in protests that are aimed at irrational taxation of the masses. The common people do not want to pay toll tax at different plazas every few kilometers. They question the rationale behind such taxation when they pay road tax and other taxes at the time of purchasing their vehicles. There is also resentment against the multinational corporations (MNCs) and big domestic corporate houses making big money at the cost of common man,” he said.

“The success of the strategy to choose toll plazas as protest sites can be gauged from the fact that none of them are functional in Punjab today. Even in places towards Pathankot and Hoshiarpur where the farmer unions are not as powerful as rest of Punjab, the toll plazas are unable to charge toll tax. Knowing that the contracts for running these plazas are with the super rich, the people are eager to vent their anger against the economic disparity at such sites,” Narayan Dutt of Inquilabi Kendra Punjab, pointed out..

It gave a call for all India protest demonstrations outside electricity department offices on Wednesday to support the strike action call given by workers and engineers of the power sector to stop privatization and ‘loot’ of consumers including farmers, removal of subsidies etc.

AIKSCC joined this call in continuation of its demand of scrapping the Electricity Amendment Bill 2020 while stressing on the need of active synchronization of workers and farmers so that through unity the working class and common people are able to resist the ‘anti-national’ and ‘anti-people’ policies of the ruling regime.

The AIKSCC has announced a one week long campaign in villages from February 3 to 10 against the RSS-BJP targeting of farmers, and police repression. One of the high points of this campaign will be the ‘Chakka Jam’ program on February 6 for which mobilization has started on the ground in a big way.

“With privatization, input cost of farmers will increase as subsidy provided by the governments will be eliminated. The budget has neglected long standing demands of farmers to ensure appropriate minimum support price (MSP) at C2+50% (Swaminathan Commission formula) for all crops of all regions of the country. The farmers are in struggle at the borders of Delhi and all over India for the last many months but the government is ignoring and neglecting the demands that the largest section of the producing classes have raised. “This cannot be accepted and this exposes how much this government is under the grip of forces of corporate monopoly,” the statement underlined. 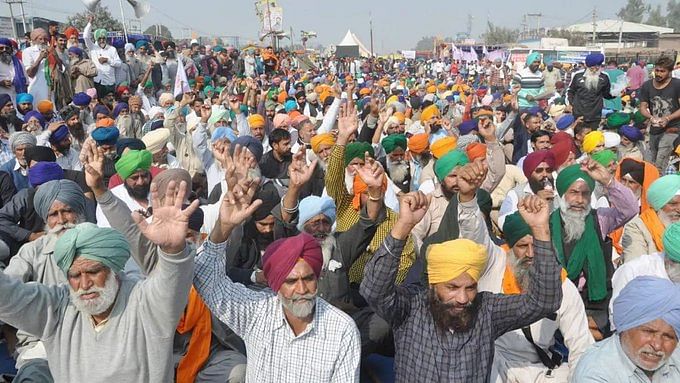