From an official MEA statement to an FIR registered with the Delhi Police...

The internet has been abuzz with reactions to tweets by pop star Rihanna, environmental activist Greta Thunberg, and United States Vice President Barbara Harris’ niece Meena Harris - all of whom took to Twitter in support of the ongoing farmer’s protests in India.

The response to the tweets began with predictable trolling, with angry social media users slamming Rihanna, Thunberg and Harris for speaking out on the issue. Also predictably, the abuse hit repeated new lows, with trolls hailing musician Chris Brown for assaulting Rihanna, tweeting along the lines of ‘Chris Brown did nothing wrong.’

Leading the charge on social media is actor Kangana Ranaut, who hit out at Rihanna in a series of tweets. A sample includes: "Yes please India wants to know, to simplify to Indians, she is a singer much like Sunidhi Chauhan or Neha Kakkar ...what is so special about her, well... she can shake her bum cheeks and expose her a** crack right in to the camera lens while singing..ya that’s all. Nothing else.”

But things took a turn for the bizarre when India’s Ministry of External Affairs stepped in with an official statement. The MEA slammed the tweets by Rihanna and Thuberg as “sensationalist” in a detailed statement released on February 3.

“Before rushing to comment on such matters, we would urge that the facts be ascertained, and a proper understanding of the issues at hand be undertaken. The temptation of sensationalist social media hashtags and comments, especially when resorted to by celebrities and others, is neither accurate nor responsible,” the MEA statement said. Social media erupted following the statement. On the one hand, several wondered why the MEA was responding officially to a series of tweets by international celebrities. At the same time, the MEA’s proposed hashtags #IndiaTogether and #IndiaAgainstPropagdanda were trending, with several high profile Indian celebrities joining in.

Bollywood biggies Akshay Kumar, Ajay Devgn and Karan Johan were amongst those who tweeted the MEA’s proposed hashtags, joined by cricketers including Sachin Tendulkar, Virat Kohli, Anil Kumble and others. Additionally, an FIR was registered with Delhi Police. Initial media reports said that the FIR was against Thunberg on charges of sedition and conspiracy for her tweet on the issue. Delhi Police later clarified that the FIR is not against Thunberg, but against ‘unknown persons’ behind the toolkit Thunberg used on Twitter - which, the activist said, could be used to help the farmers’ protest. The ‘toolkit’ is a document that includes measures of protest such as raising a Twitter storm, protesting outside Indian embassies and the offices of the Adani and Ambani corporate houses so as to raise support for the farmer’s protests.

At the same time, many took to social media to express support with the farmers, and praised Rihanna and others for speaking out on the issue. Singer Diljit Dosanjh even dedicated a song to Rihanna, posting it with the caption #RiRi and a raised fist emoji.

Rihanna thus far hasn’t responded to the controversy, but Thunberg and Harris both reiterated their support for the farmers. Thunberg tweeted: "I still #StandWithFarmers and support their peaceful protest. "No amount of hate, threats or violations of human rights will ever change that. #FarmersProtest."

Harris followed with a simple: “I won’t be intimidated, and I won’t be silenced.”

While the response to the MEA statement is fairly predictable - with two polarised sides driving the debate on the farmers protests, another interesting development came in the form of an official United States response.

“We recognize that peaceful protests are a hallmark of any thriving democracy, and note that the Indian Supreme Court has stated the same,” the US State Department said, in response to a question by a Wall Street Journal reporter after the MEA statement was issued.

The State Department said that the US believes all parties should resolve differences through dialogue, but added, “In general, the United States welcomes steps that would improve the efficiency of India’s markets and attract greater private sector investment.” “We recognize that unhindered access to information, including the internet, is fundamental to the freedom of expression,” the State Department said.

The US embassy spokesperson in New Delhi made a similar statement, adding “These are private citizens expressing their points of view. I don’t have a comment on remarks from private citizens.”

Separately, it is worth noting that in December 2020, India had summoned the Canadian envoy in New Delhi after Canadian Prime Minister Justin Trudeau said, in reference to the farmer’s protests, that the right to peaceful protests should be supported.

The US State Department statements follow a similar line as Trudeau, underscoring respecting the right to protest. India has responded with comparing the farmers protests to the attack on Capitol Hill. MEA spokesperson said, “"India and the United States are both vibrant democracies with shared values. The incidents of violence and vandalism at the historic Red Fort on 26 January have evoked similar sentiments and reactions in India as did the incidents on the Capitol Hill on January 6 and are being addressed as per our respective local laws."

The spokesperson made it clear, "we have taken note of comments of the US State Department. It is important to see such comments in the context in which they were made and in their entirety." And added, “As you can see, the US state department has acknowledged steps being taken by India towards agricultural reforms." 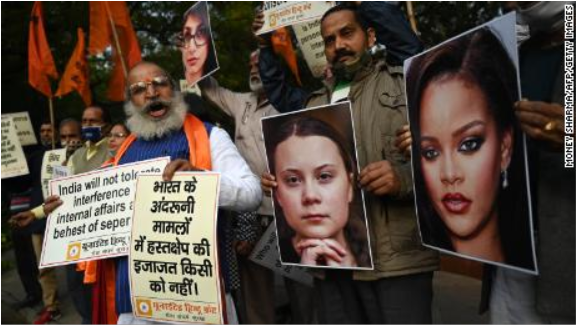